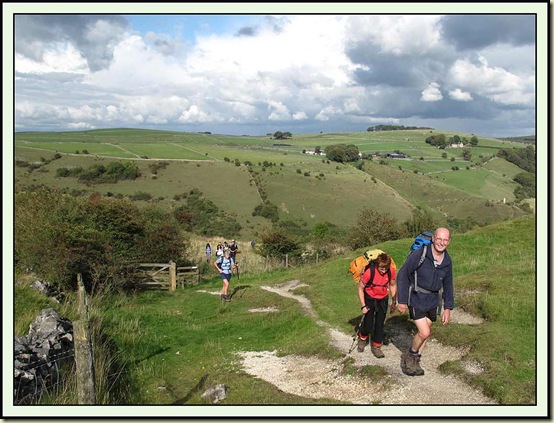 Today some 22 'random' folk assembled in the vicinity of the well hidden church at Taddington for a 10am start on a fine late summer’s day.

Amazingly, everyone who had said they were coming either turned up or excused themselves, and we started early!

With leaves changing colour, autumn seemed imminent, but shorts and t-shirts were still (slightly) in evidence as we set off through a ginnel beside Daybreak Cottage which leads over a stile and into fields. 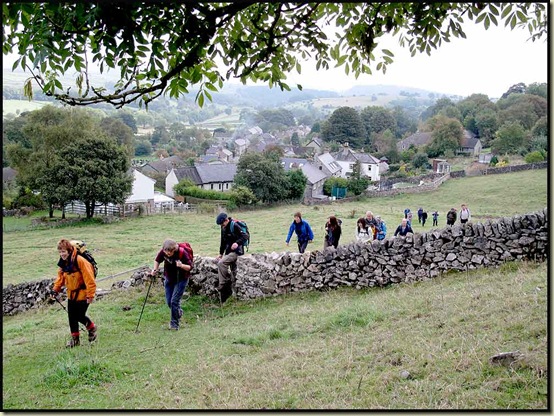 Taddington was soon left behind as we gently ascended to Sough Top.  A poor gate vault, employing the ‘inflated stomach technique’ was used by one of the more eccentric members of the party to ‘bag’ a summit that appeared to be atop an industrial mound.  A trig point (438 metres) was then ‘collected’.

The day was dull, with sunny periods, but warm and very sociable as we chatted our way along the easy path through fields of stubble towards Chelmorton, the descent to which village passed through some woods that provided camouflage for those in need (there are no public toilets in Taddington).

Bank Pit Spring was a highlight of the path to Chelmorton.  Historically the source of the village’s water supply, it was known as the ‘Illy-Willy Water’, and lies at the end of Grove Rake, an important former lead mining site.  The trough is the first of what used to be a series of water supply troughs down the main street of the village.  These were replaced in the late 19th century by  a 10,000 gallon tank which has now itself become redundant.

The 13th century church that we passed on our left stands at a height of over 350 metres and may be the highest parish church in England.

It was a bit too early to take advantage of refreshments at the Church Inn in Chelmorton, despite some enticing smells.

After a right turn along some easy farm tracks, and then along thinner field paths, we found ourselves high above the deep cleft of Deep Dale, into which it’s a steep, slithery descent.

This is an SSSI (Site of Special Scientific Interest), where mining activities of bygone days have left many relics at the different levels of the mines.  In spring there are banks of orchids to enjoy.  Today, knapweed and scabious were much in evidence, as we looked down Deep Dale towards Topley Pike quarry, a source of limestone aggregate, which dates from 1907.

There's what appears to be a cave to explore at the foot of the steep slope.  This is not in fact a cave but a short mine level that has been driven into a calcite vein. Up until the late 1970's the level was apparently almost full of crystal-clear water giving it the name of Pool Cave. The level was subsequently drained by mine explorers to see if it continued for any distance into the dale side.  In fact the level soon ends at small rubble filled hole in the floor.

Deep Dale is a rough place to walk down, but not a patch on the infamous Monk’s Dale.  Earlier in the year, bloody cranesbill and clustered bellflower would have been in flower here.  They may be still, but I didn’t notice any, nor did we linger to investigate the sites of mining history.  The scarce cistus forester moth may be seen feeding on rock rose that grows in the dale, but we didn’t spot it today.

After escaping from the slithery stones of Deep Dale and crossing the A6, an easy road leads under the railway and into Wye Dale, where a new café heralds the start of the Monsal Trail, which this year has celebrated the re-opening of the tunnels along its course to Bakewell, meaning that cyclists can now enjoy the pleasures of the trail alongside the walkers, who for many years have had to use footpaths to get around the closed tunnel sections.

Elevenses were late – it was after 12.15 when we eventually halted beside the end of the Monsal Trail and set about demolishing a whole batch of Sue’s chocolate caramel shortbread, after discovering that a) only three of our party actually wanted to buy a drink - most had flasks
b) an enticing piece of grass with a picnic bench just across the river was Strictly Private, and
c) there were no toilets.

Never mind, Anne enjoyed herself in a tree house, anyway. 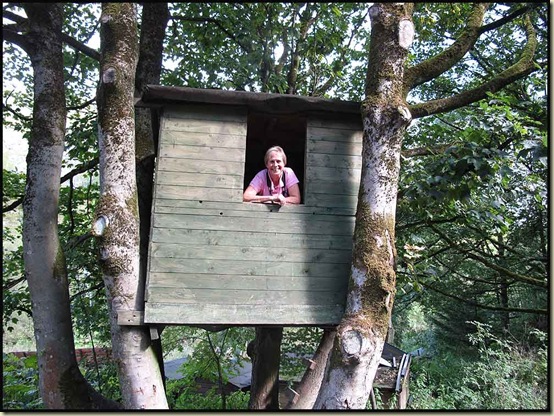 We were now on the disused railway line that used to link Derby with Manchester.  The line was opened in 1863, when some people saw it in the same light as many of us now view wind farms.  For example, Ruskin wrote about it: 'There was a rocky valley between Buxton and Bakewell, once upon a time, divine as the Vale of Tempe... You Enterprised a Railroad through the valley - you blasted its rocks away, heaped thousands of tons of shale into its lovely stream. The valley is gone, and the Gods with it; and now, every fool in Buxton can be in Bakewell in half an hour, and every fool in Bakewell at Buxton; which you think a lucrative process of exchange – you Fools everywhere'.

The tunnels have recently been carefully restored, enabling cyclists as well as walkers to enjoy the 8.5 mile track to Bakewell, so with horses, walkers and cyclists it can get a bit crowded.  However, even on this busy Sunday most of the cyclists were sedate and courteous, with just one bunch of youths bucking that trend.  There were no horses to be seen.

Unlike in the days between the line being closed and the tunnels being shut, now that they have reopened, the tunnels are nicely lit during daylight hours.

We passed above Chee Dale, another SSSI, with many flowers, and butterflies like the dark green fritillary.  Bridget spotted a dipper, but the spotted flycatchers and redstarts mentioned on the information board remained elusive.

East Buxton Lime Kilns were opened in 1880 and were in use until 1944, some giant buttresses having been added in the 1920’s.  They are very spacious inside and produced about 50 tons of rather caustic lime each day.

I chose this spot for lunch.  It was one o’clock after all.  The grass was damp, but most seemed to manage fine. 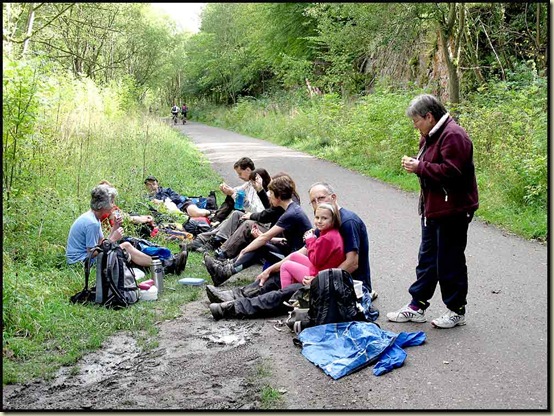 Fran and Stephanie arrived on their bikes - "You know it's only a few minutes walk to a much better place to stop at Miller's Dale Station" she suggested.

"We're happy enough" chirped some voices from the woods.

However, two renegades continued on regardless and found a more comfortable location, equipped with benches, ice cream van and toilets. 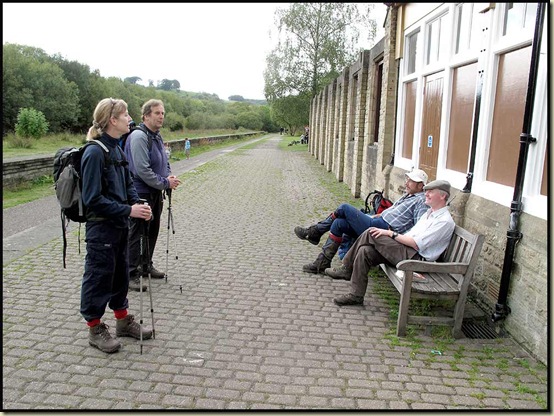 Miller’s Dale station was once the largest on the line – situated at an important junction where passengers from Buxton could make connections with the express trains running between London and Manchester.  Whilst the line dates from 1863, it had just two platforms until 1905, when an extra three platforms were added, together with a second viaduct.  The station even had its own Post Office.

After another short break at what should really have been our lunch stop (and a suitable alternative starting point for the walk) we continued on past Miller’s Dale Quarry and The Litton Mill Railway Cutting – both SSSI’s in their own right, the latter being cut into an ancient lava flow front dating from around 330 million years ago.

My brain is starting to hurt with all this technical stuff!

At Litton Mill we left the railway for a while and passed the restored mill building, which looks much better than it did a few years ago.

The sun shone as we passed through Miller’s Dale, with coots, dabchicks and mallard all assuming their customary poses as we passed along the pleasant riverside path at Water-cum-Jolly, heading towards Cressbrook Millpond and its wall of rock.

Goosanders are common around here, but what's this bird, seen on the millpond? A long-tailed duck?


After crossing back over the river Wye via bridge by the weir at Cressbrook, the views open out as the path ascends back up to the railway line, with the buildings of Monsal Head on the horizon in the near distance.  For those desiring a slightly longer walk, it would be easy to include Monsal Head on an extended itinerary.  It has good views and facilities.

Looking back towards the smart buildings of Cressbrook, it’s hard to imagine that they date from 1787 – rebuilt by Richard Arkwright junior after Richard Arkwright senior’s original 1779 mill had burnt down in 1785.  The mill’s heyday was in the 19th century, but it continued to produce high quality cotton for the lace making industry until 1965. 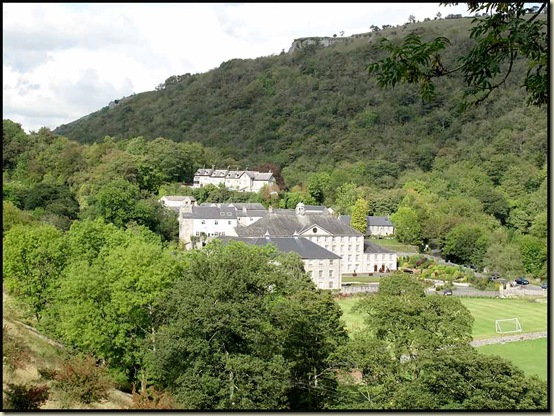 Now we turned right, heading up through Cressbrook Tunnel, at 800 metres the longest tunnel on this section of line.  The track emerges into a short section of daylight with excellent panoramic views that some of us haven't enjoyed since the tunnels were closed many years ago.  Then it disappears again, into Litton Tunnel. 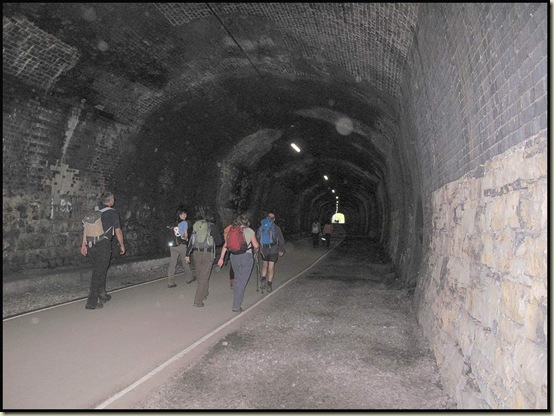 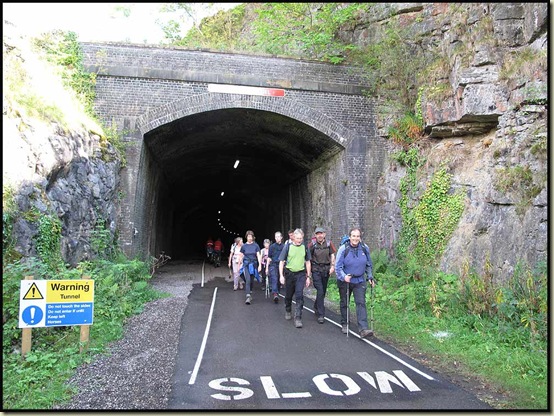 We left the railway for a second and final time, saying goodbye to Fran and Stephanie, who had been monitoring our progress on their bikes, to ascend Priestcliffe Lees, another SSSI, where pansies, leadwort and orchids are said to abound.  We just found some sheep, happily grazing on the late summer vegetation. 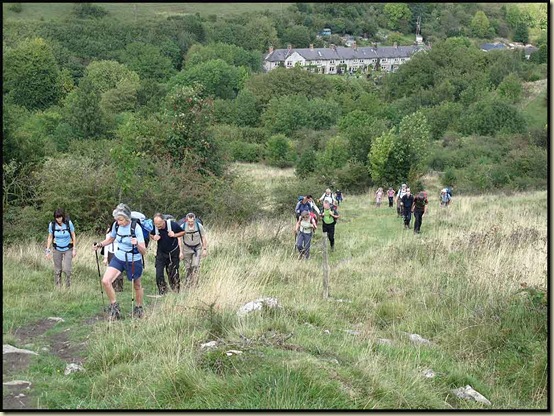 It was a steep ascent, but everyone seemed happy, and some pleasant field paths then took us across the deep cleft of High Dale and back to Taddington by 4.15. 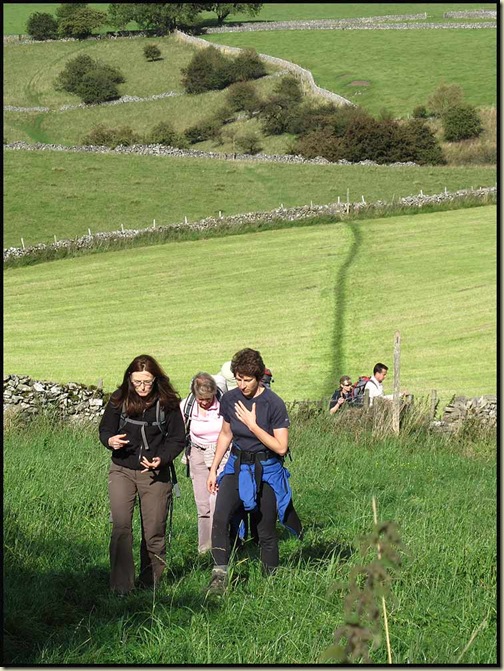 Anyone starting from Miller’s Dale could maybe enjoy a break at the Queens Arms in Taddington, but with Sunday suppers to prepare, our party had dispersed by 4.30. 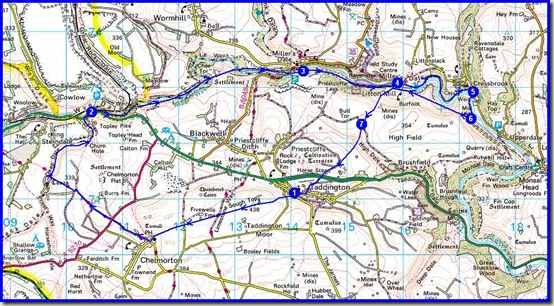 If anyone is interested, the full slide show is here.

For another pleasant six hour walk in this area see here.

Finally, thank you – everyone – for coming along; it was great to see some of you for the first time in ages, and to enjoy the company of such an eclectic mix of people.

As usual Martin, an interesting post packed with information. Enjoy your weekend in BoG.

It was a grand day day for a hike. Pity i wasn’t up to it.
We were really looking forward to it.
Your Turkey reports were excellent btw.
Have a good weekend, as Gibson says.

Thanks Gibson, and Alan - it's a shame you couldn't join us, it would have made it even more 'random' - there were no other bloggers on the walk - and I do hope that you'll be up for a stroll sometime soon.