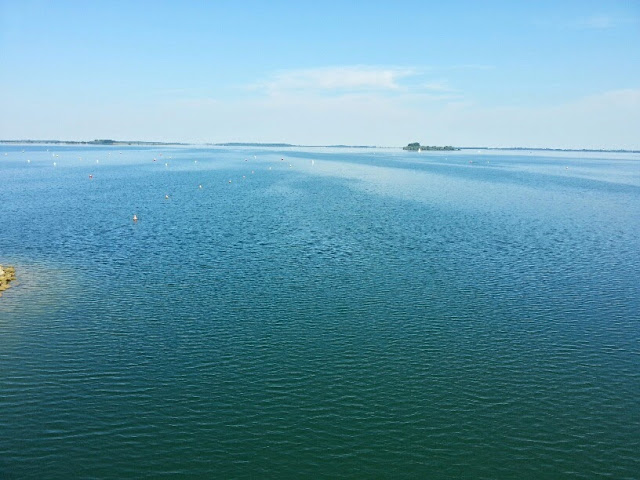 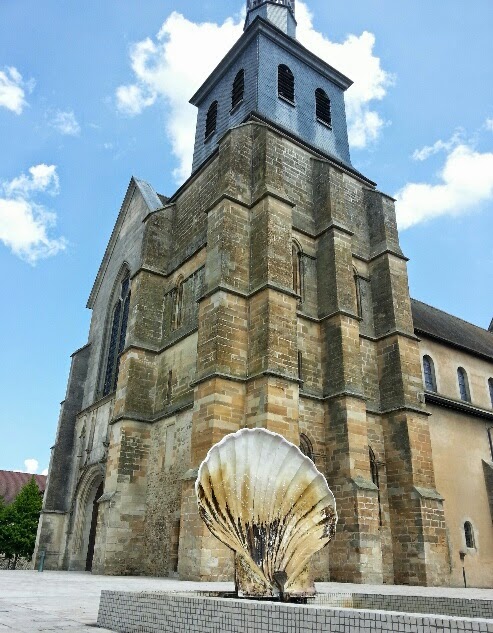 Last night Wassy was a dead loss for food. We couldn't find anything acceptable.

So off to the fleshpots of Saint Dizier we trundled, full of hope and expectation. A pleasant main square emerged from dowdy surroundings, with three restaurants, two of which we could sit outside in the sunshine. We made our choice.

"Deux pression et le menu, s'il vous plait". The response was a polite "Sorry, we are not cooking tonight." So we went to L'Indus Italian Restaurant. The sun soon deserted us and my optimism took a dive when I saw someone else's pizzas coming out of the kitchen. We ordered what should have been a tasty meal but felt insulted by its poor quality. Bland food with burnt bits served on cold plates with no attempt to appeal to the taste buds. Dire! But at least we weren't poisoned like Andrew was in Badia when he went to watch the World Cup final.

Today we are concocting our traditional 'Cocktail of salads a la campsite' meal, with a selection of desserts,  the left over of which, if any, will be used for tomorrow's breakfast.

Anyway, we slept well and the 9 o'clock bakery van provided nice croissants for breakfast. Then we headed off to Lac du Der, which has a visitor centre at Giffaumont-Champaubert that serves as a base for exploring the man-made lake and its surroundings. A bicycle would be helpful, but we managed without that luxury.

The River Seine suffered devastating floods from the in 1910, 1924 and 1955, after which the lake was formed as part of a programme to regulate the flow of the river, and the Marne valley, much to the distress of the 300 inhabitants of three villages that were wiped off the map, but to the delight of those such as Parisiens further downstream.

Each year the lake is allowed to fill up from December to June, by when it covers some 4800 hectares (it's 10km long). Then much of the water is gradually released, reducing the area of water to around 1000 hectares.

Our visit to the Visitor Centre at Giffaumont-Champaubert, reached via massive fields of sunflowers, revealed leisure activities on an industrial scale. A 5km stroll hardly touched the surface. It was hot. Ice cream was most welcome. It was a bit like a giant Center Parcs complex, with extensive construction work going on, but once away from the crowds there was pleasant lakeside and woodland walking, with lots of interesting wildlife. As previously mentioned, those with bikes are at an advantage here.

Lunchtime beckoned and we drove into the pretty village of Giffaumont-Champaubert in search of bread and cheese, or similar. We found the Restaurant Le Cheval Blanc, cunningly disguised as a Logis hotel. We gave it a try. All last night's culinary disappointments were put to rest as we enjoyed a perfectly formed lunch in this lovely spot. The diners were largely French, a nationality that is pretty sparse on that country's campsites. Here the vast majority is Dutch, with Belgians a distant second. French and Brits tie for third place. That's it really, other nationalities must stay elsewhere.

We returned from lunch by a devious route through picturesque villages with timbered buildings, such as Montier-en-Der, where there's a nice church - pictured. There's also a handy supermarket, the produce from which we'd better now scrape from its molten mass in the scorching hot footwell of the car. (It's not quite that bad, but tricky to keep cool on this roasting hot day that has proved to be exceedingly relaxing.)

Here's a slideshow for the day (34 images)
Next Day
Back to Index
Posted by Phreerunner at 18:28

I've been very interested in following your holiday progress. It sounds as though you've had a good trip overall. Have a safe journey home to the overheated UK! See you soon. R&C send best wishes.