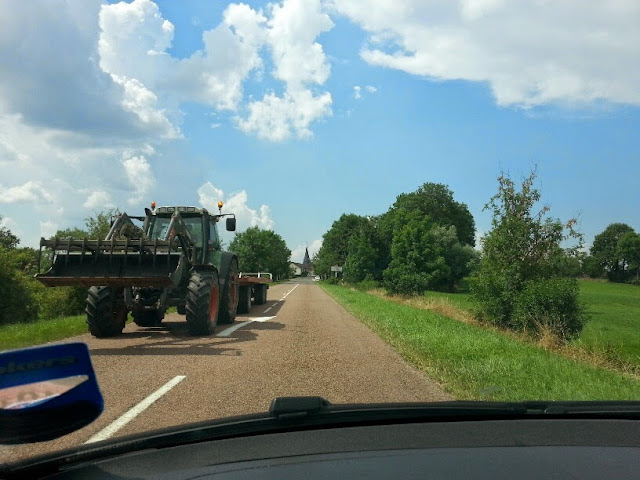 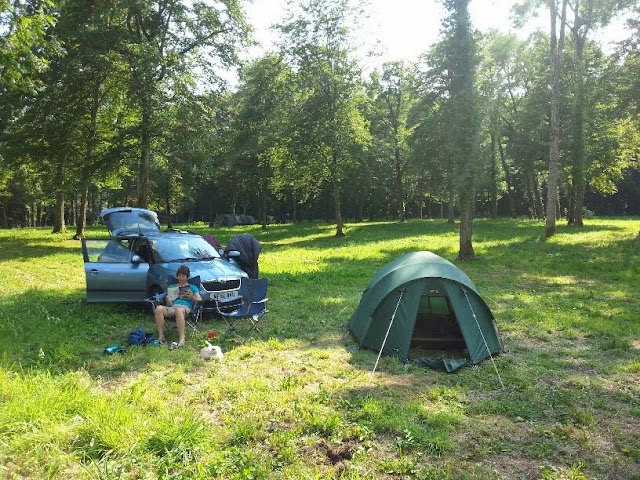 Strawberry tart for breakfast was followed by a chocolate croissant/pain au raisin when the bakery van arrived. They like their tarts here, as Susan discovered in Badia, where Ricky's were probably the best we've had.

By 9.30 we'd paid our bill and had got Patricia to telephone ahead to book us into another 'Flower Campings' site for a couple of nights. We were there by 3.30 after 200 miles of French country roads, having decided to avoid motorways until back in the UK.

Sadly, we narrowly missed Besancon and its 2* Michelin restaurant recommended by Humphrey, but after stopping at Decathlon in Dole to replenish gas supplies we did enjoy an excellent coffee at Le Convivial Comtois restaurant in the pleasant village of Moissey. Menu du Jour looked a good bet at €12.50, but not at 11.30am.

Sweetcorn, Sunflowers and Silage seemed to feature highly on our journey through lush countryside interspersed with the small villages and walled towns of the Haut-Saône. We didn't have time to explore, but at least we didn't zoom past on the motorways. Farm vehicles featured strongly (pictured). Alan R would be in his element.

Around Joinville, not far from our destination, we encountered a storm, during which the temperature dropped from 30C to 17C. Luckily, by the time we reached here the rain had passed - it didn't rain here - and the temperature was back up to a rather sweaty 29C.

Sue is pictured at our home for the next couple of nights. It's the Domaine du Buisson site near Lac du Der, which we will explore tomorrow. If you need electricity, the site is full; for the minority who don't have that requirement there is plenty of space. The next tent is some distance away and although we are pitched in the middle of a wood, there's a strong wifi signal so this message should 'send' without difficulty.

There's no shop here, so we'll enjoy our dinner in nearby Wassy.

Here's a slideshow for the day (26 images)
Next Day
Back to Index
Posted by Phreerunner at 17:02

Easy one today Martin. Its a Fendt 818 i think the model is. Fendt are part of the AGCO group which Massey are also owned by. There’s one of these about 500yds away from me. Expensive bit of kit.

A careless move from Sue and I'd have had one 'up the gullet', Alan!