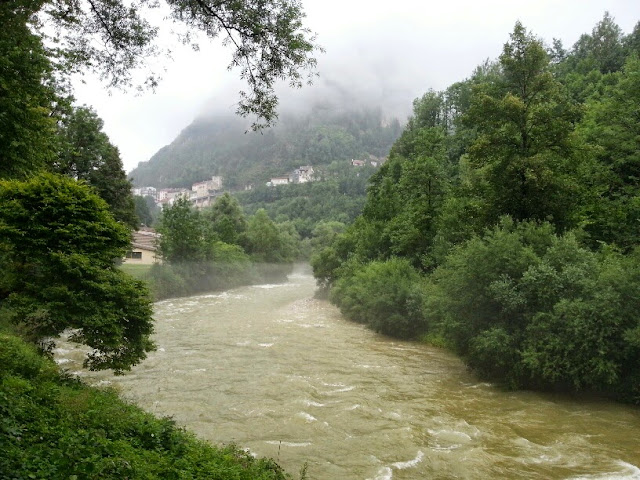 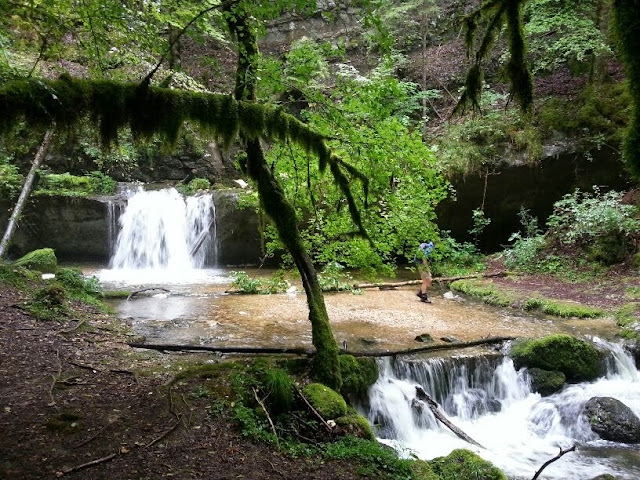 It rained. Sue didn't bother with waterproofs but I wore mine all day. We were equally damp at the end. It was that sort of mizzle from a cloud base just above us.

We walked from the campsite for a total of about 24km with 850 metres ascent.

First stop, on the way to which the upper river picture was taken, was St Claude, a place perhaps similar in size to Luchon in the Pyrenees. After coffee there, we set off towards a cascade but missed the path. So we tolerated a section of the GR route that traverses the Jura. Mostly uphill on tarmac in trees.

Eventually, after an al fresco lunch courtesy of Spar, we found a way round to a small cascade by a hydro plant - the Combes cascade. It wasn't a huge waterfall. Most paths were blocked off for repairs from July 2014 to April 2015. It didn't seem to have occurred to them that anyone might approach from our direction.

The lack of a map was a minor hindrance that we overcame by devious means to locate the Cascade de la Vouivre. This wasn't very big either. It's pictured, with Sue dodging the torrent.

Nearby were giant mushrooms/toadstools and different types of Red Helleborine, Bellflowers and Melilots, to name but a few of the plants, which are 'woodland' rather than 'alpine' here in the Jura.

This is an area of waterfalls. We noticed on our return to St Claude that there was a plethora of 'Cascade' postcards, none of which featured those we visited today.

Dinner was acquired from shops as we returned through the ancient cathedral town of St Claude, and eaten in the room above the campsite restaurant - a large games/TV/dining sort of area - very convenient.

I think we made the best of a dull, rainy day. We met two other walkers all day. The area is pleasantly wooded and hardly overcrowded. Dutch and French dominate the campsite.

Here's a slideshow for the day (43 images)
Next Day
Back to Index
Posted by Phreerunner at 19:50