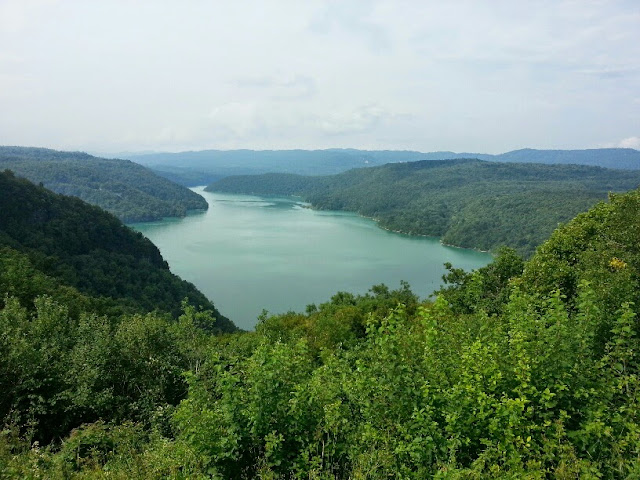 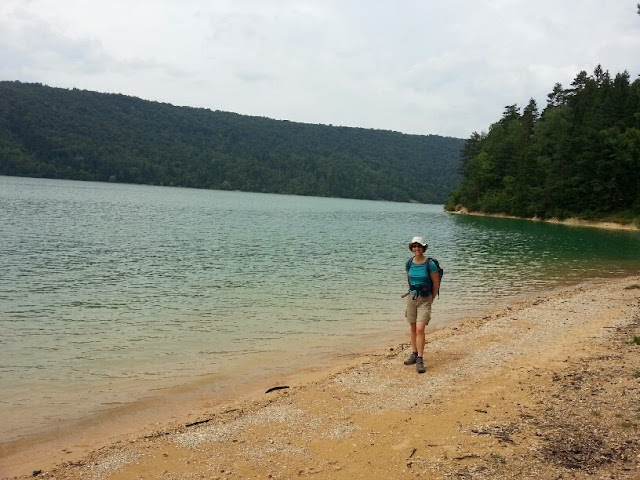 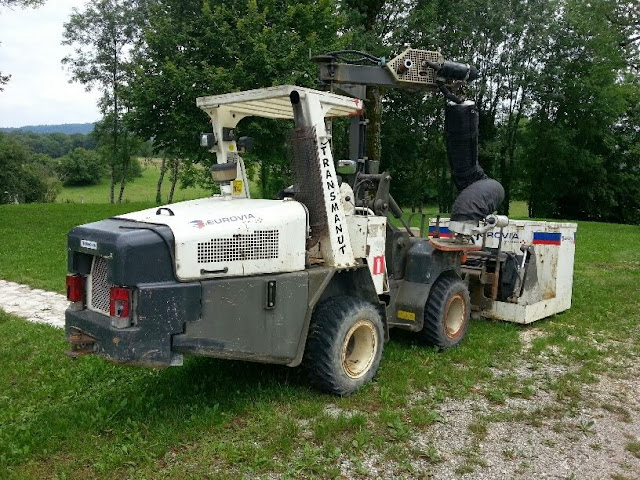 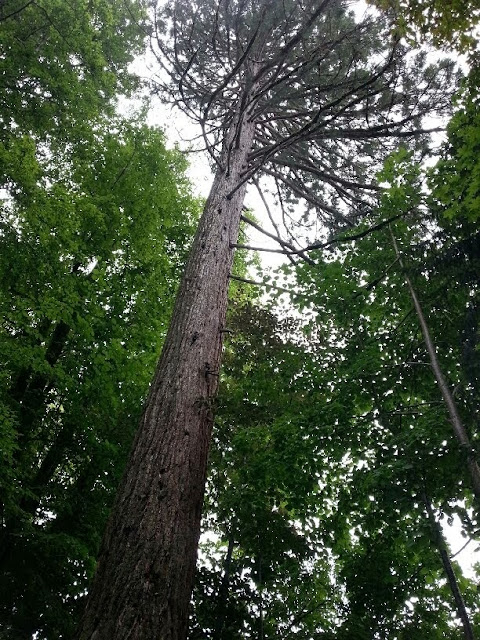 Decisions! Stay put or move on? Inertia and a desire to finish my book (A Load of Old Bones - Suzette Hill) dictated the former. We also had a desire to explore the Jura in rather better weather than yesterday's.

Despite some cloud today, we did have to dig out the sun tan cream, and shorts and t-shirts were the only clothing needed.

After eventually getting away at about 10.30, curiously booking an extra night in a queue of people who should have been leaving but were all extending their stays, we drove a few miles to the large Lac de Vouglans. Our first view (top picture) of the lake was from Le Regardoir, a restaurant just beyond the interesting looking village of Moirans-en-Montagne. Coffees went down well, but we eschewed the nearby via ferrata route after seeing in the car park the minibuses that transport a group of French children who are staying on the campsite.

A little further on, we parked at the Mairie in the village of Maisod for a 6 km stroll around a headland. Sue is pictured on the beach that we reached via pleasant woodland paths from which we harvested some chanterelles for supper. There had been only a few places from which to look out over the lake, including a spot where a witch had been created out of sticks.

The lake was formed in the Ain valley in 1965, creating the reservoir for the Vouglans hydro-electric scheme that controversially drowned numerous villages and antiquities.

After passing several picnic spots (we had no picnic, my cash reserves were left in the tent) we lunched frugally in a beachside café before returning from that 28C sunspot, slowly uphill, past what looked like a great campsite, on quiet roads back to Maisod. Our route passed numerous brightly coloured flower beds, with accompanying poems, and a piece of machinery (third picture) for forensic analysis by Alan R.

Next, a drive to Longchaumois via St Claude, where we stopped to pick up dinner, thanks to Sue's credit card. The road wound up around 500 metres to a plateau at about 900 metres. Here we found 'Maison de la Flore'. Three rooms had aspects of geology, local life, and cut and labelled flower specimens. Outside, trees were nicely labelled, including two giant sequoias, planted when the park was established in the 1860's. They have a long way to grow to reach full size - one of them is pictured, the lowest of four pictures I'm attempting to send today, given that there seems to be a strong wifi signal here in our tent in the middle of the campsite.

A series of birds had been nailed to trees, each viewed through a fixed lensless 'telescope' mounted on a box that responded to anyone viewing the bird through the telescope by playing a sound track of the relevant birdsong. Excellent!

A musk orchid (Herminium monorchis) was on display - there is an important site for these nearby - and numerous other orchids, many of which we've seen on this trip, were also on display.

Just as we were about to leave, it was suggested that we might like to see the exhibition of spectacles (lunettes). Having skilfully avoided St Claude's pipe museum yesterday, we succumbed today and spent the next hour plus with our guide, an enthusiast who spoke, naturally, only in French, and one other tourist. Between 1800 and 1940, local farmers made spectacles during the winter months when snow covers the landscape and farming tasks are minimal. We received a comprehensive education as to the art of spectacle making, including demonstrations of pince-nez etc, showing us how the tiny screws are made, how the arms are curved, and how the lenses are cut and ground and bevelled, etc. It really was most comprehensive and if I'd been able to communicate better I'm sure I'd have come away with some repaired sunglasses.

We extricated ourselves after 5pm and enjoyed a further chat with the flower enthusiasts before returning to the busy but quiet (our neighbours are bikers - always quiet as soon as the engines are turned off) campsite to enjoy our salads, chanterelles and chocolate slices before an early night and a scenic drive tomorrow.

Here's a slideshow for the day (43 images)
Next Day
Back to Index
Posted by Phreerunner at 20:12

Its a kerb laying machine. Cannot say I have ever seen one of these in real life. They make lots of forklifts especially those which you see regularly attached to the rear of a host vehicle. Impressive bit of kit. This one is probably 73hp with a Kubota v3300 engine.

If you're going north from Longchaumois and have the chance to spend time in Besancon do take it! Way back in '94 I drove over from Geneva and had the all-time best meal of my life there. A 2 star Michelin at the west end of town - five courses and the sommellier eked out three glasses of wine to perfectly complement the meal. When the the French, bless their little cotton socks, talk amongst themselves all agree that the most honest cuisine comes from the Jura, and that Besancon will do you proud.

Loving your accounts. Off to Bagneres de Luchon for a three-week bimble along a loose take on the GR10 on August 14. Salut les copains!

Thanks Alan, that's another mystery solved - there was quite a bit of new housing in Maisod.

Humphrey - sadly we need to go a little beyond Besancon today, so we'll be missing out on the delights of its local cuisine. We'll do our best a bit further north though. Recently we've been enjoying campsite salads as the Euros got a bit low then got left in the tent...