The Alps - Day 4 - Dornbirn to St Anton to Berggasthof Bodenalpe, beyond Ischgl 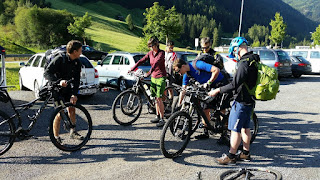 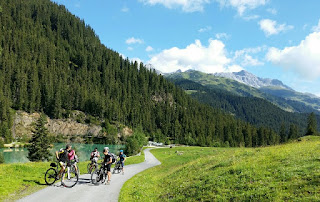 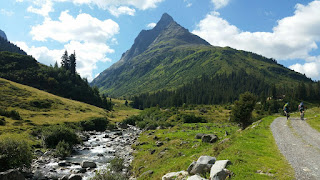 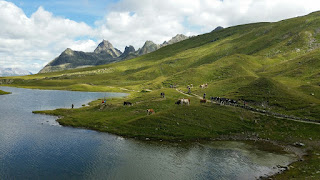 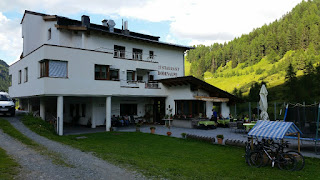 It was good to finally be in the mountains after the long drive through fairly nondescript countryside, blighted in Germany by numerous motionless wind turbines, standing in silent groups like monstrous sculptures.

After driving up to St Anton (50 miles, 1.4 hours), our seven TransAlpinistes, already reduced from eight by Dieter's illness, assembled for the off:

Having met Rouven at Dornbirn railway station at 7 o'clock, by the time we had assembled at St Anton we were in need of a breakfast. So after riding for about 1 kilometre we wisely stopped. For breakfast. Very nice it was too. Coffee and bread and butter.

Then we set off at 9.45 past masses of people about to set off on a mountain bike race. That was the last we saw of them. They weren't going in our direction. Unlike my 2010 TransAlp when Markus and I found ourselves ahead of the peleton.

The long ascent up the pretty Schönverwalltal valley was easy for most of the way. Frequent stops for photos were in order. Conditions were as good as they get. I was at the back, but not too far behind.

The rough track eventually turned into a muddy rocky path. This is my territory and I was soon tracking Rouven and moving steadily ahead of the others, who were pushing or carrying sections that Rouven and I were attempting to cycle. Rouven was more successful at that than me, but I was pleased to be enjoying the technical ascent.

Eventually we we forced to push for part of the way up to the Neue Heilbronner Hutte at 2300 metres. Those behind me were baulked by cows.

it was nice to have lunch at the Hutte without the smell of muck spreading wafting over the sandwiches, as it had done on my picnic stops during the journey to Dornbirn.

The descent to Ischgl - a good 20 km, was almost entirely downhill, mostly off road. Absolutely brilliant.

Ischgl provided a bike shop into which several members of the party rushed their bikes. Repairs and maintenance were duly provided, much to the relief of Daniel and Markus in particular.

We all enjoyed coffee and applestrudel or coke and cake or whatever, in a nearby café.

Then a thrutchy (don't you just love that word) ascent on steep tarmac led up another 500 metres to this fine mountain guest house at above 1900 metres.

5 pm. Beer o'clock. Then a leisurely evening with an excellent meal - fridatten soup (pancake strips in beef stock), schnitzel with a lovely cream vegetable sauce and pasta and salad, then a cake and cream dessert.

An excellent start to the trip. It's a really good group to be with. We have bonded well and are ensconced in two very smart and well equipped rooms for four.

I won't mention the sleeping arrangement for want of causing a scandal.

Next Day
Back to Index
Posted by Phreerunner at 20:01

Just got back from Canal du Midi last night and catching up. Wow, you do get about a bit. Can't keep up with you.

This sounds just the ticket.
Breakfast, lunch & supper, with beers and happiness.
Sound!