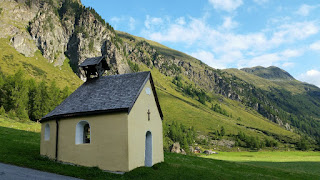 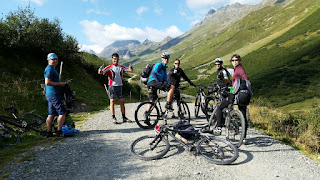 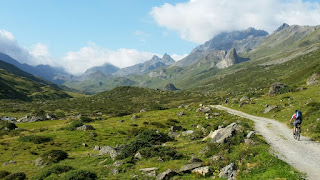 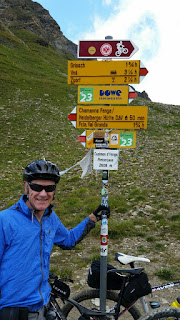 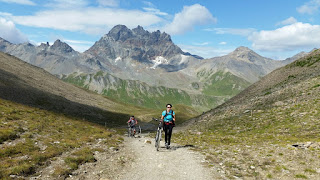 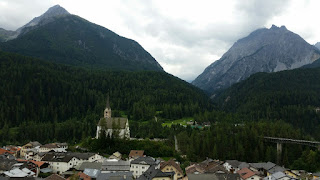 Weather: sunny and warm at first, clouding over with spots of rain later.

After what can only be described as a luxurious breakfast, Rouven and I found Markus praying in the local chapel.

Perhaps he was praying for sunshine, more likely that his brand new Canyon 2016 bike would have no more teething problems - his front suspension needed pumping up yesterday. Hopefully Daniel's new front cassette would also work fine.

In the event we had no further bike issues today.

The biking day started at 8.45 with a long ascent. It was easy enough from our lodgings at 1930 metres, up to the Heidelberger Hutte at 2350 metres. Two electric mountain bikes passed us. Cheats? After that it was mainly pushing, up to Fimberpas at 2608 metres. En route there were a few interesting sections that could be ridden. Rouven, Thomas and I enjoyed these and pulled ahead for a long break at the pass.

We needed all the rest we could get. The next hour or more was spent on the most technical long descent I've ever experienced. Absolutely brilliant. Stumpy (my bike) took it in his stride and we all arrived safely, at our own speeds, at Griosch. A couple live in this remote spot all year round and provide welcome sustenance to walkers, cyclists and skiers who pass that way. The carrot cake was delicious.

Markus had devised a variation to the planned route that dived down a grassy field, took a footpath across three suspension bridges, and led our decreasingly merry band a merry dance up a near vertical path composed mainly of big rocks and tree roots.

That eventually put us in a great position to descend via an exciting track/path to Scuol.

The supermarket was raided before we went down to the river and commenced the 650 metre ascent to S-charl. I soon dropped back. The others do non technical ascents rather more quickly than me. But it was still early. No need to hurry, despite the occasional spot of rain.

Sleeping arrangements are more 'normal' tonight. As we had four rooms for the seven of us, I was expecting Claudia to be able to have a room of her own, thereby avoiding the need to share a double bed. However, as I arrived late I found my sleeping quarters had already been allocated. We are in a twin room next to Markus and Rouven in a really nice attic suite. At least we don't have to share a bed tonight!

The meal was a la carte, no half board tonight. Excellent. Pricey.

Today's pictures:
The Chapel at Bodenalpe
Milling around near the start
The view towards Fimberpas
At Fimberpas
Claudia and Daniel arriving at Fimberpas
Scuol, looking towards Lischana, where we went last year

Next Day
Back to Index
Posted by Phreerunner at 19:18

welcome to Switzerland! Isnt the area stunning. I also crossed the scuol area at my Transalps. Seems you are doing good!

It sounds like you're still surviving on three square meals provided by someone else and with no washing up.
What better holiday can there be?
I like the sound of electric mountain bikes... I think I might need a very big battery.

Alan - I thought of you when I saw those gents on the electric bikes. They were just having a whale of a time on a there and back outing. No mud for them...