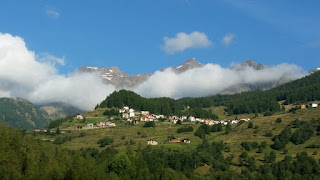 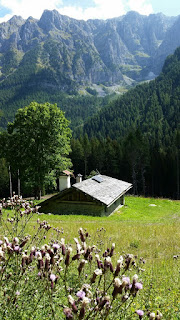 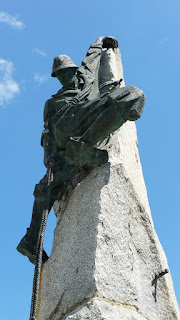 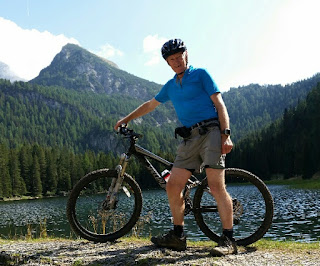 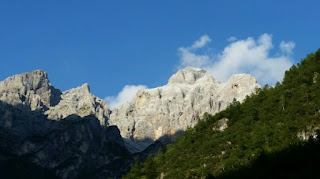 You'd have thought that sharing a room with a dental student would have brought an offer of experimenting by way of gluing my front tooth back in. But Emanuel is wise for his age and the offer was not forthcoming.

Breakfast wasn't sparse. We stoked up for another energetic day. The first 18 km saw us swooping on roads at first then good cycle tracks, to Dimaro for coffee.

Then a 900 metre ascent on forest tracks. What a contrast to yesterday afternoon. This ascent was largely on well graded tracks that weren't energy sapping and didn't require much pushing.

Moreover, it was a lovely day, with fine views of the Brenta Dolomites. I just about managed to keep up with the group for a change.

Beyond Madonna di Campiglio we paused to enjoy lunch at the Rifugio Cascata di Mezzo, which overlooks the impressive eponymous waterfall.

A good descent led us to the start of another 400 metre ascent up the Agola valley by way of good forest tracks. This brought us out at Lago di Val d'Agola, where Daniel, Claudia and Markus all enjoyed a swim.

I didn't enjoy the next section - a 250 metre push up a steep footpath to Passo Bregn de L'Ors (1848 metres). A guided Korean group and three Germans were at the top, just a two and a quarter hours' walk up to the 12 Apostles Rifugio, visited some years ago when we traversed the Bochette via ferrata between Madonna di Campiglio and the lovely town of Molveno.

The Rifugio was clearly visible in its unlikely situation below a gliding eagle.

Gravelly tracks led quickly down to Albergo Brenta, where we have enjoyed another massive meal and a few rounds of 'birra grande'.

I'm sure there's more to report*, but I'm tired. There's no phone signal or wifi here.

* Daniel says I nearly killed him in an overtaking manoeuvre on the gravel. I say he should get a better bike. Rouven says he should be more careful (Daniel had earlier been accused of distracting Rouven, causing him to fall on the gravel).

Four of the bikes are newish, with 29 inch wheels that are supposed to ride better over rocks. They are all state of the art full suspension bikes. My nine year old Specialised Stumpjumper bike has full suspension but Daniel and Emanuel have no rear suspension  ('hard tails'). Emanuel's is newer than mine and has had no issues. Daniel's bike is of unknown vintage and sports old fashioned and somewhat ropey equipment. He does well to keep up.

Next Day
Back to Index
Posted by Phreerunner at 07:52

Are you sure you're not in the Lake District? I'm damn sure that the chap in Picture 3 is one of the Abrahams scrabbling his way to the top of the Napes Needle!

I do hope you're all wearing your knee and elbow protectors. The Lord only knows what nasties are in that foreign gravel! You can't be sure, you know...

Yes Alan, you could be right about that sculpture. Maybe I added an old image by mistake.

I don't think we've been going fast enough to need all those protector gadgets, though I suppose some of us overcooked the odd rock, so to speak.

As for food - tomorrow's entry will make you laugh or sigh - I'm not sure which....