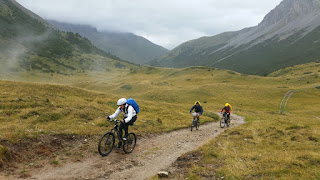 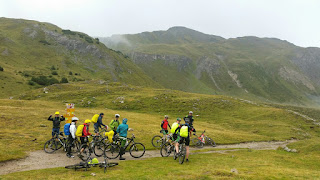 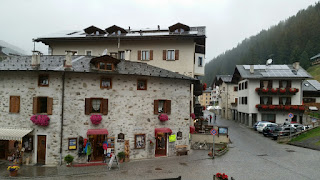 In the expectation of a long day in the saddle, we breakfasted at 7 and set off at 8.15 on an overcast morning.

The ascent to Passo Costainas was easy enough, on a good track as far as the final entertaining single track path to the 2230 metre pass.

We milled about for some time before descending another lovely sweeping technical path with steep gravel and rocks, requiring some care with the brakes. I was careful to follow Rouven's line wherever possible. The trail eventually landed in the village of Santa Maria, at the bottom of the Swiss side of the Stelvio Pass. By now it was raining. We had adjusted the planned route to cater for bad weather. Hence the rest of today's ride would be on tarmac.

The rain eased as we rose 400 metres in improving weather to the Alpenrose café. Soup or salad to accompany some welcome rehydration fluids. Our final encounter with wealth draining Swiss prices.

Then a further 700 metre ascent past squealing marmots, flitting dippers and bedraggled flowers led to Umbrailpass at 2505 metres. The others got quite cool in the damp weather while they waited for me to complete my ponderous ascent. From here the top of the Stelvio Pass was very close, but our descent to Bormio took a right turn and plunged down 1200 metres through various layers of cloud.

The wetness gradually subsided and the temperature warmed to the extent that by the time we reached a café in Bormio after about 30 minutes my waterproofs were dry. The descent, albeit on tarmac, was brilliant. The Garmin download will eventually produce data, but I'd guess that some of the 15 or so kilometres took little more than a minute.

I followed Markus down at the head of our peleton. Our bikes seemed to corner better than the more timid motorcyclists, one of which Markus had to restrain himself from overtaking. Great fun. It left me with admiration for the motorcyclists who accompany bike race peletons.

Coffee and cake or ice cream all round fuelled us for the final 600 metre ascent to this fine albergo, reached well before 5 pm.

There was plenty of time to wash bikes and enjoy several different saunas before heading down to our half board meal. Five courses, with plenty of choices, starting with a help yourself salad to match that of the hotel in Nuria where Tobi and I stayed just a few weeks ago.

All in all, another great day in the saddle, and nobody's even admitting to having a sore bum!

Tonight I'm in a room for three, sharing the twin bedded area with Emanuel whilst Claudia has been relegated to a private zone with bunk beds. Emanuel and I are debating what to charge her for the use of our bathroom.

Everyone on this trip has a great sense of humour, which is just as well given the nature of some of the banter.

Thomas rounded of the evening with a story about a game show in which he successfully appeared with Jennifer Lopez.

Next Day
Back to Index
Posted by Phreerunner at 21:05

I see "Day 6" in the blog post title and panic, until I realise that it is actually "Day 3".
You seem to be excelling yourselves in the troughing department: Breakfast, Lunch, afternoon tea and dinner as well! Admit it; this is just a dining club on tour and you're all using those electric bicycles!

I know you're game, Sir! The game is up!

Ahem. That should of course have read "I know your game..."