The Alps - Day 9 - Albergo Brenta in the Algone valley to Arco, near Riva (Lake Garda) 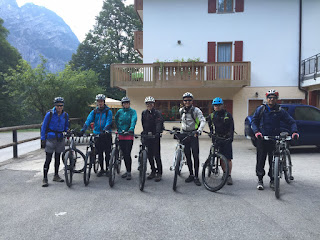 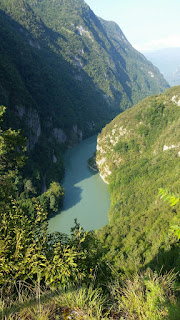 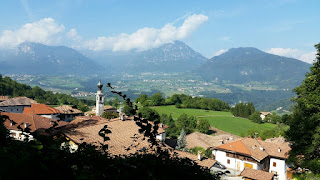 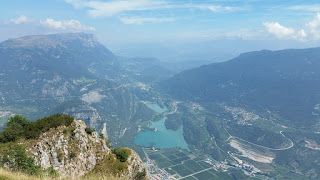 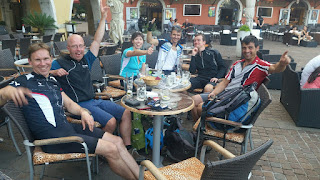 Weather: sunny and warm; cloud on the summits; very hazy.

We were supposed to leave at 8.15, but the regular tedium of a team photo delayed that. In a half hearted protest my bike is pointing backwards today.

Sharing a bed with Emanuel wasn't really acceptable, though we didn't make a big issue of it. Rouven now knows in future to warn anyone from the UK in advance about the possibility of sharing a bed with anyone but their partner on any trips he organises. I assume he and Markus also shared a bed. If not, they are out of order.

A cool 7 km descent to a main road led us fairly quickly, above an impressive gorge, to Stenico and thence to Godenzo and Comano, from where the 1200 metre ascent of Monte Casale started. It was ok at first, up a steep road. That gave way to an even steeper track that I could cycle, but I found it quicker to walk, then an even steeper concrete track that I stood no chance of cycling up. So, a third day of considerable pushing, which is disappointing.

Near the 1632 metre summit of Monte Casale is a small rifugio - Rifugio Don Zio. Everyone else seemed to get served with lunch here. Arriving last, and as usual deserted by tail end Charlie (I'm not sure what would have happened if I'd had a mechanical failure), they rather rudely indicated that they were too busy to serve me - presumably busy cooking for the rest of the group. The early bird (aka quicker cyclist) gets the worm (aka lunch). Luckily I had some Gatorade and a twix bar, and the hope of a proper meal later.

I trust the rifugios in the Valmalenco area will do better next week.

I wandered up to the summit and admired the hazy views to Lago di Toblino and beyond. It was a lovely calm, warm sunny day.

The descent to Lake Garda only involved 350 metres of ascent, so whilst I was slow I didn't cause any worse delays than the ongoing addiction to group photos. The trail led down undulating rocky and gravelly paths. Slowly we gained views down to Riva and the lake, but without the excitement of the paths leading down by the alternative Tremalzo route that Markus and I took in 2010.

The final section was on a busy road, after which we went to the slow serving Moby Dick café in the port for refreshments.

And that was the end of this TransAlp bike ride. More group photos were taken beside the lake, then we dispersed.

Unfortunately the 'proper meal later' never materialised, but I did have a pleasant wander around Arco, and I do have the luxury of a single room. Finding the hotel (Hotel Garden) was something of a problem as Thomas, Daniel and I were left to find our own way. Luckily I had the name of the hotel in my bag, but the address on its website was incomplete and took us to the wrong place. We eventually completed the 12 km journey by about 7.30. After a quick shower I went down to find people, and failed. I imagine the others are in one of Arco's many pizzerias, but I have no idea which one and I couldn't spot them anywhere. The place is heaving, there's some sort of climbing competition going on, with climbing harnesses being acceptable dress for dinner! At least I'm preserved from the agony of even more group photos.

So Mr Sloman, a day of contradictions - no beer and very little food, but plenty of exercise. Maybe I'll try to do the opposite tomorrow.

Today's pictures:
Starting from Albergo Brenta
A lake below Stenico
Looking back to Comano
The view from Monte Casale
Happy TransAlpinistes outside Moby Dick in Riva

Next Day
Back to Index
Posted by Phreerunner at 21:21

Woe, woe and thrice woe!
Goodness gracious, Sir! No luncheon whilst all about are scoffing away?
You need a Proper Planner to plan your days, sir - it all started out so well!
It's a bit like walking with Mr Walker - He farts & fannies about posting stuff home (before he has even started the walk) leaving you bored and cold, and then races off into the distance...

Or stays in his pit way past shoving-off time, leaving you cold and bored, and then races off into the distance...

The full-fat pictures today were glorious, Martin. I notice that quite a few of you have cloned Ngumo's legs. Will there be enough to go around for his TGO walk next year?

I enjoyed your journey Sir - perhaps more than you? You need one of those electric jobs, sir!

Ngumo's legs are good for downhill starts. Some folk use Ngumo arms as well (I must buy some).

I did generally enjoy the journey, especially the descents. No pain, no gain.

Keep tuned as the trip isn't over - apart from the vaseline and Ngumo legs part. Your comments will we hope continue to entertain, and be the basis for a few good laughs at the end of October.

I've just re-read this entry. No offence to anyone is intended. It's all water under the bridge. As far as I'm concerned we are all friends again.