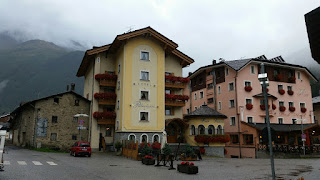 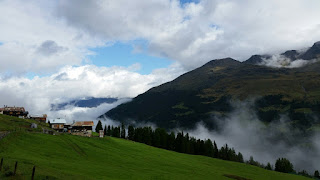 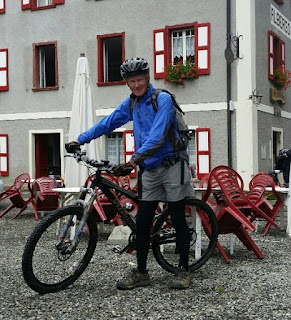 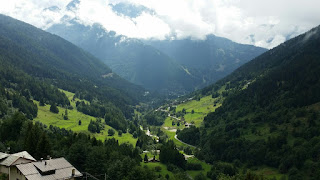 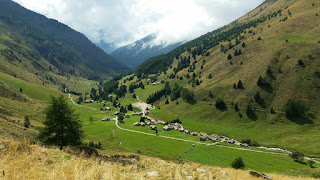 Heavy overnight rain eventually stopped at 9 am, just as we were about to set off. So waterproofs were stashed and we left the pleasant little town at 9.15, stopping first to relieve the local shop of all its bananas - free of charge as they were too ripe to sell.

We were passed by a group of English road cyclists who appeared to be on a Geneva to Nice trip organised by blueskycycletours.com. After a break for coffees etc at the pass we found ourselves descending about 1200 metres over 11 km with this group. Their road bikes were quicker in ascent but the bumpy surface gave our mountain bikes the edge on the descent. The road bikes struggled to keep up with our flying septet.

Lunch at the bottom of the pass, after the enjoyable half hour descent, was followed by a steep off road climb to Rifugio Bozzi and thence to the 2613 metre Forcella di Montozzo. Whilst Rouven, Markus and Thomas were able to cycle most of the way, the rest of us spent several hours pushing our bikes up much of the 1050 metre climb. Not the most enjoyable experience.

The descent to Cogolo was over 1400 metres, mainly rough, rocky and technical. The skill was in knowing when to get off and push. Others explored their limits. Rouven and Markus are experts so they never fall off. Especially Markus, who as tail end Charlie has a fairly safe and relaxing experience. Thomas tracks Rouven as best he can and is very good, but on this descent one corner caught him out - I found his bike in the middle of the trail, with Thomas emerging from the undergrowth some distance away. He soon re-passed me.

Behind me there's usually a big gap, but at the start of this descent Daniel's squealing brakes indicated he was close behind. I nearly came to grief on some big rocks, so I slowed down, expecting Daniel to pass. Everything went quiet. He has bruised wrists from two somersaults.


Meanwhile, Emanuel was also demonstrating a 'female' as it's apparently known, by gracefully somersaulting just in front of Markus.

Claudia is canny; she knows her limitations, is conservative, and doesn't fall.

I'm the only one who, despite not falling, shows signs of injury, as my front tooth crown fell out this morning.

After a final swoop down tarmac we reached the town of Cogolo shortly before 7 pm and once the hotel had been located most of us managed to wash our bikes, and shower and change for dinner at 7.30. I'm sharing with Emanuel. Claudia is even more lonely than she was last night.

The hotel staff are friendly and the dinner was good, which Markus and Rouven are relieved about as this is the only place on the itinerary that they haven't used before.

It was nice to hear from Sue, who is enjoying her visit to Kandersteg and reports:

'Great day up at the lake today. Three goes on the Rodelbahn then a swim in the lake followed by an hour rowing across to the big waterfall. Walked down. Cool under the clear sky now.... I got invested as an honorary member of 1st London Colney scouts! So two neckerchiefs now.'

It was also good to hear from Humphrey, who has enjoyed a very sociable stroll along GR5 (the Geneva to Nice path).

Today's pictures:
Last night's hotel - Albergo Pedranzini
On the ascent to Passo Gavia
Me and Stumpy after a good lunch
Two pictures from the ascent to Forcella di Montozzo

Next Day
Back to Index
Posted by Phreerunner at 22:29

There's a blighter in the third picture who's stolen Ngumo's legs! I can't say I blame him, as there does seem to be an awful lot of uppishness in these days' climbs and his legs will be considerably more athletic than the author's.

Somersaults, crawling through undergrowth, "doing a female" and bruised wrists. You chaps certainly know how to enjoy yourselves. Is it a public school thing?

No public schoolboys here Alan, just a load of idiots pushing bikes between eating places. Not always successfully. I've just spent two hours pushing only to be told they were too busy to serve me, so lunch was a swig of Gatorade and a twix bar. Others fared better...