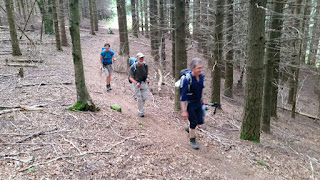 Stats:
15 km 1680 metres ascent 6 hours 10 mins (Martin and Sue) 7 hours 20 mins (Cary and Graham) A cloudy day with sunny periods in between threats of rain. After an adequate breakfast at friendly Hotel Melini, we sorted out lunch at a nearby shoplet and Cary got some cash and posted a few unwanted items home. He, Sue and I have very little luggage - small 5 to 6 kilo day sacks, whereas Graham's bag feels nearly twice as heavy. No doubt he will appear in a different outfit every night, a picture of sartorial elegance. We set off on Stage 14 of the GEA around 9 am, though Sue and I have Fitbit watches that steadfastly refuse to accept European time so we were stuck in a GB time warp at 8 am. They also refuse to 'sync', leaving me feeling I'd be better off with my trusty Altimax. Starting steeply and sweatily up a path through trees to reach a wooded ridge, we continued upwards to emerge from firs into lovely beech woods (pictured) that led eventually to a picnic bench in a clearing. The pause was welcome, especially as Sue produced some shortbread. The next picnic bench was occupied by the first people we saw today. Two Belgians who were also starting the GEA route from Pracchia today. They made room for us on the bench and explained that they had chosen a shorter day than us and were heading for Rifugio Porta Franca. We may see them again. Despite still being August it seems to be out of season here. We enjoyed a lavish lunch a bit further on, on the picnic benched terrace outside Rifugio al Montanaro. There was no water available and I'm not sure whether the emergency room was open. By now the air was heavy, the rumble of distant thunder was getting closer, and rain looked inevitable. Soon after a four way junction* where the sparkling new signs were pointing in the wrong direction, a painted waymark a few metres away gave the game away and we followed route 20 to a spring that was just a slow dribble. Cary and Graham took advantage of this. Sue and I ambled on along the excellent contouring path that arrives eventually at Passo del Cancellino. It was cool here. There was no sign of the others so in view of the ominous weather we pressed on up a 200 metre ascent to another col. Drops of rain. Still no sign of the others. So we made a quick dash over a rocky crest then enjoyed a roller coaster belvedere route to pop out unexpectedly at the Rifugio next to Lago Scaffaiolo. Meanwhile, C and G had decided to go over the summit of Mount Gennaio and by the time they reached Passo dello Strofinatoio the threatening weather forced them onto a roundabout route. Hence their late and rather wet arrival, by which time Sue and I had got through a huge pot of tea and were becoming a little concerned! We are the only people staying here tonight. Dinner was vegetable soup, polenta with sausage meat, lots of red wine, and cake. Views from the rifugio were intermittent, with rain continuing into the night. * Passo del Malandrini - meaning 'pass of evildoers' (such as those who incorrectly position signs).
Posted by Phreerunner at 06:54

Fit bit app settings select automatic time zone. It worked for Lyn and mine. Still only got a 10 floor credit for a 669 m ascent today.