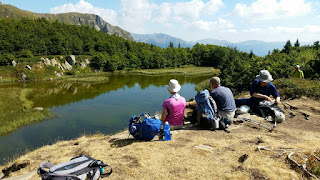 A 'blue sky' start, with bits of cloud developing during the day, but no threat of rain. Pleasantly cool in t-shirts and shorts on the tops.

After a good breakfast we set off shortly before 9 am today (8 am for Sue, whose iPhone has steadfastly resisted all attempts at synchronisation - my Android phone having finally achieved Fitbit harmony after I'd set both Fitbit and phone to Rome time. Robert's suggestion is actually our default setting that proved to be no use at all.)

The path rose gently past lots more willow-leaved gentians, through beautiful woodland, eventually steepening to emerge from the forest near Lago Nero, a lovely spot where we are pictured taking one of today's many breaks.

From then on, until the last bit of descent to Lago Santo, we were high on the crest of the Apennine chain. A heat haze corrupted distant views, for example to the marbled summits of the Alpi Apuane, but we could look back to the ground we'd covered since leaving Pracchia with satisfying clarity.

From Lago Nero the path crested the ridge, passing over several summits that the lazy Belgians, who we encountered from time to time all day, missed out. They did however follow us up the steep exposed scramble to our final summit, Monte Rondinaio. This 1964 metre chunk of mountain is apparently the second highest point we will reach on this trek. There was a soggy visitor's book that we ignored. Yves and Michele arrived soon after us. The six of us were the only GEA walkers out today, but there were lots of day walkers in this scenic area. Rondinaio means 'swallow'; today it was martins that were scooping up the insects.

An easy descent by one of a choice of paths led us down to the fleshpots of Lago Santo Modenese. There are three rifugios here. Vittoria was open and looked idyllic in the afternoon sunshine. Marchetti was closed. Giovo had been hard to book and Sue's phone call had effectively secured a room for three men. After initial confusion we were soon sorted out with a double for me and Sue, and a family room for Cary and Graham. We left them to fight over the double bed and headed down for a pot of tea.

Lots more willow-leaved gentians were seen today, and great big woolly thistles, as well as a fair cross section of other flora. No sheep, cattle, horses or any other form of livestock are apparent high up - not even wild goats, just a few disturbances caused by wild boar rooting for grubs and truffles, and the occasional  whistle of a shy marmot

Rifugio Giovo has fed us on tagliatelle with ragout, trout with chips and salad, and mille-feuille with bilberries. Excellent. And red wine. Served by Eleanor, a recent psychology graduate with very good English (hello Eleanor - feel free to contact us, and to visit us in Manchester), who looks like parkrunner Jenn's long lost sister.

The lazy shy reticent Belgians, Yves and Michele, are also here and have assisted with the above 'report'. Very jolly! Yves stresses that they are not lazy at all - they followed the route description in Gillian's first edition whereas we are using her second edition!
Posted by Phreerunner at 08:37

Your photo benefits from enlargement. There is a guy lurking in the bushes in the background - makes me think of being accompanied by Security in some repressive regime.

great to follow your progress (as usual)! have a lovely time. Gillian

Hi, it's so nice read about your experience and your memories about me. Ehm, hi, I'm Elena, not Eleanor :)
the strange new psychology u met in Rifugio Giovo with an excellent English (not so good but now i can say to know new words for future translation like bilberrys, grilled meat, mashrooms, ham).
So glad to know u, it was a pleasure for me talking with you and laugh for my english, for conversation, for my general joking..
I will start to follow your voyage and, if i can, in future, i will be so happy to visit u in Manchester.
See you soon (i hope).
Elena

Hi Elena, thanks for your comment and sorry we got your name wrong!
You must send an email so that you know to contact us when you come to the UK.
It was good to meet you and we all hope you succeed with your plans.
Marin, Sue, Graham and Cary