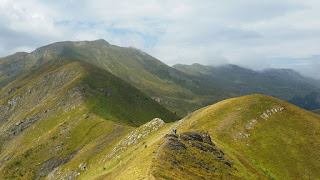 Started in a cloud, which slowly cleared to yield blue sky. Gradually clouded over again, with distant thunder and light rain shortly after we finished.

We were the only guests at the Rifugio last night. At some point Cary and Graham admitted that their late arrival was partly due to them walking past the Rifugio in the fog and ending up at the old Refuge at the other end of the lake. It was securely locked. That's the one marked on the Kompass map, so they had no idea where we were and there was no phone signal. Eventually they found us, but anyone visiting Scaffaiolo should bear in mind that the Rifugio is at the north east end of the lake.

We set off at 9 am (8 am for those with Fitbit watches), and after passing the old refuge we followed a path that was signposted to Passo Calanca but took us over the wrong ridge. That was swiftly corrected, thanks to ViewRanger.

It was a fine roller-coaster ridge walk for much of today. Soon after passing a cloud riven WW2 memorial and relics, the vapour began to dissipate. We enjoyed elevenses at Colle dell'Acqua Maria, where marmots whistled and a group of about eight Italian day walkers passed in the other direction. They were the only people we saw all day.

There were a few exposed sections as we passed over Cima Tauffi and along the ridge to Libra Aperto, at 1936 metres our high point of the day. Today's picture was taken in the vicinity of Cima Tauffi, looking ahead to Libra Aperto in the distance. Our views also extended back along the ridge and on to mountains peripheral to our route, as well as to several valleys sprinkled with the white houses of small communities in the approximate area in which Eric Newby's classic book 'Love and War in the Apennines' is set.

Lunch was on the summit of Libro Aperto, but I'd had mine at the foot of the 300 metre ascent. It was the most disappointing packed lunch ever - a slab of cheese between two stale pieces of bread. It did the job though, and I don't think we were charged for it...

A pleasant descent into woodland with huge ants' nests concluded the day's walk. By 4 pm we were enjoying a pot of tea outside Hotel Primula, where half board is a  very reasonable €40 per person.

Many small kestrel like hawks have been seen, as well as grouse, meadow pipits, jays, wheatears and others. They are mostly very quiet - the singing season is long gone.

Flower of the day: Willow-leaved gentian. A list of the flowers we've identified will appear in due course. The most ubiquitous today were carline thistles and ling (heather).

Hotel Primula is great. They have fed us well and even provided extra cake - the same dessert as last night, but this one was freshly baked and absolutely delicious. It's a sort of lemon sponge with lemon flavoured crême patisserie inside.

The two friendly Belgians, Yves and Michele, are also here. They are using Gillian's first edition guidebook, so they were pleased to compare notes, as we are using the new edition. They could actually purchase a copy here. Clarissa is proud to have them on sale. The family here have English connections and speak good English as well as being friendly and accommodating (like virtually everyone we encounter over here).
Posted by Phreerunner at 20:29