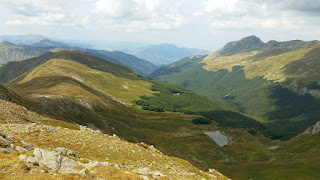 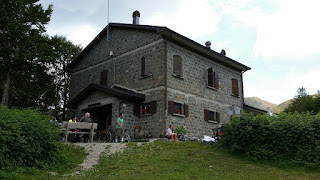 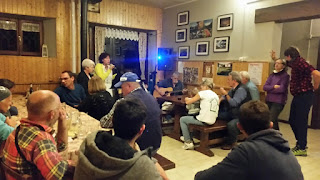 Another day of lovely woodland (just a bit at the start) and lots of sweeping balcony paths, culminating with Monte Prado, at 2054 metres the highest point on the GEA route.

The trees were negotiated as we thought of Wythenshawe's parkrunners about to head off on their weekly trial through the muddy passage in Manchester drizzle. For us, the sun was shining again as the previous two days' weather pattern was repeated.

Sue lagged on occasion today. I hope she came away with some prize winning images of fungi, field gentians and other tasty subjects.

On the ridge, a herd of goats was approached, but not too closely as a Patou sheepdog was definitely in charge.

Lunch was taken before the final pull to Monte Prado. English voices were heard. It turned out to be half a dozen folk who live in Vellano, a couple of hours' drive away. We spent a while with them at the top of the hill, from where today's top picture was taken. It looks down to our destination today, a friendly rifugio that is in a small clearing in the centre of the picture. The other pictures were taken later at the Rifugio, which has wifi.

There were good views in all directions, and not a windfarm in sight.

One of our new friends turned out to be proprietor of a B&B:
Darren Hackett, Casa Verde at Vellano (info@tuscanyholidays-casaverde.com).

After saying goodbye to Darren and his mates and wishing them well with their Via Francigena project, we descended through bilberries and raspberries,  of which there is a glut on the GEA, to reach Rifugio Bargetana soon after 3 pm.

It was busy with walkers and mountain bikers and even has a music event tonight. We are in a dormitory with six bikers. It's situated in a lovely woodland glade. Some visitors are camping outside.

Later:
9 pm. We've eaten lots of polenta and sausage and cake and potato slices that some choose for dessert. The wine has flowed. In contrast to previous nights we are in this rifugio with over thirty guests and a gig is in full flow. The cyclists and walkers could be excused for being a little bemused?

Note - we are here because the planned end of today's walk, Albergo Carpe Diem at Passo di Pradarena, is closed. Tomorrow will be a longer day.
Posted by Phreerunner at 20:21