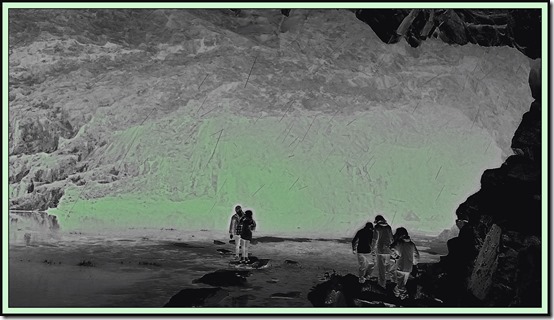 “What shall we do today?” asked Andrew, “I’m happy to lead a walk.”

David: “I think I’m having a heart attack, I must go to the doctor.”
Gaynor: “I have a serious case of Chef’s Lassitude and I can’t move…”
[To be fair, she had excelled the previous evening in the stress of an unfamiliar kitchen.]
Sue B: “I can’t move. I think I’ve broken my coccyx.”
Jacqui: “The elves kept me awake all night, I haven’t slept a wink, not even one wink, I can’t go on, today the world will end, there’s no point in going out, I’ll be hit by a dog…etc, etc.”
Sue E: “I can’t find my umbrella. I must have left it in the lavatory.”

It was p*****g down outside. Cats and dogs and red squirrels.

So the whole team lingered in the luxurious living room of Glen View, smelling just a little from yesterday’s exertions, as the shower didn’t work. 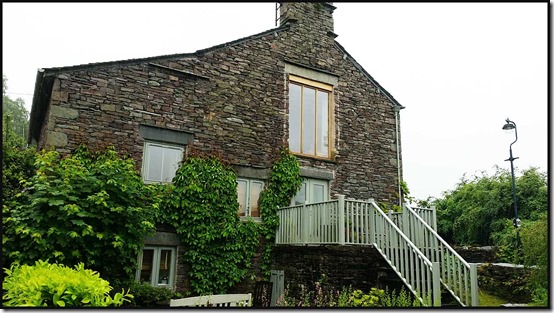 The view was admired through the stair rods. 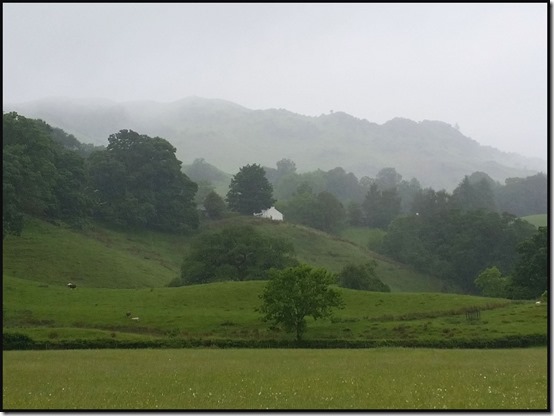 Eventually David despatched himself off to the doctor and Andrew whipped the rest of his team into action. They stumbled off in full waterproofs to the fleshpots of Grasmere. Well, a veranda in Grasmere.

From left to right, under this shallow awning:

Sue E: “David, come immediately, I need my umbrella and I think I may have left it in a lavatory, and I need you to protect me.”
Gaynor: “Where are we? I’m feeling faint. I can’t go on…Help!”
Jacqui: “Open up, I need a lie down with coffee.” [It was a furniture shop.]
Andrew: “Get a grip, you lazy layabouts!”
Sue B: “I’m stuck in this position. My back has completely locked up. Oh dear, oh dear, oh dear…” 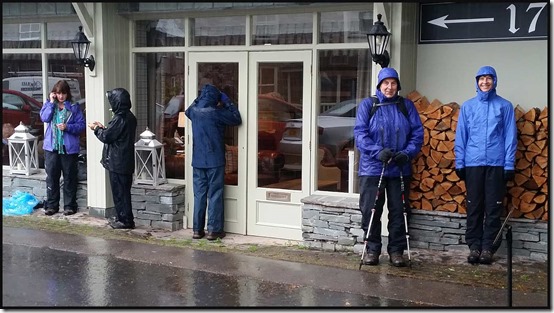 Anyway, eventually Andrew managed to regain control. Gaynor and Jacqui took turns to be piggy backed up the hill to Town End, Sue E received her umbrella by email, and Sue B travelled using a strange kangaroo like gait with a very straight back. The motley crew is pictured below, with Gaynor on cat/dog/red squirrel duty. 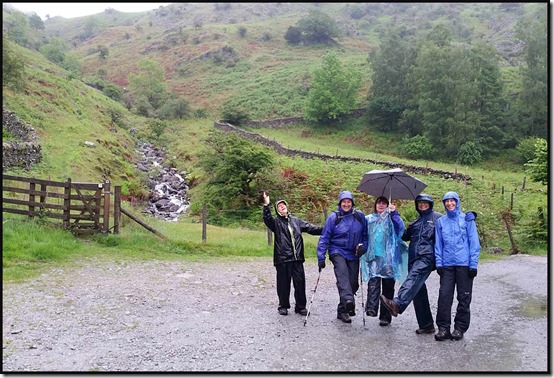 Eventually Rydal was reached, where Sue E supplemented her plastic bag and umbrella rain deflection system with the canopy of a large beech tree. 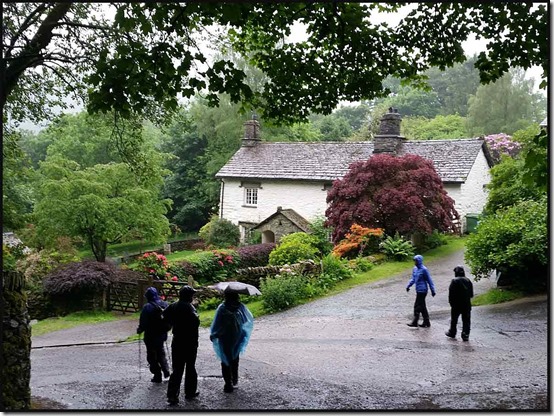 The rest of the group found a café, but Jacqui got stranded on the wrong side of a rivulet, and Gaynor got distracted by a notice board that refused to tell her the name for a baby red squirrel. 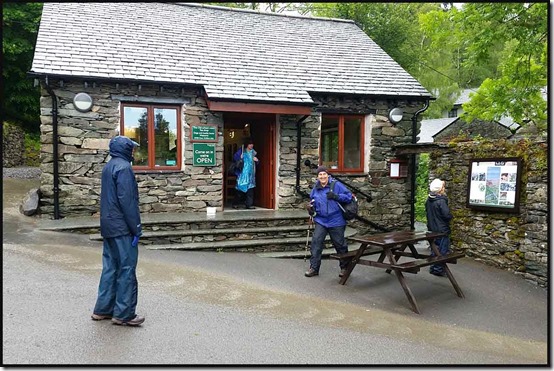 Thirsts for coffee duly satiated [and the Guinness chocolate cake was to die for], Andrew led his bedraggled charges back into the mire. By now they were in the splendid gardens that are attached to Rydal Hall. 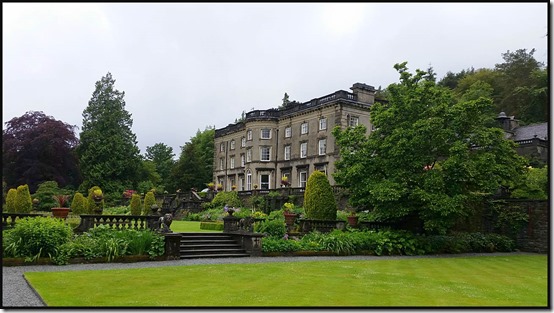 Fashioned from an old bit of limestone that was propping up York Minster, ‘The Angel’ is a masterpiece created by origami graduate Shawn Williamson. It took him three years (2007 – 2009) to make and is a tribute to the late Josephina de Vasconcellos, a renowned sculpt with whom he worked nearby. 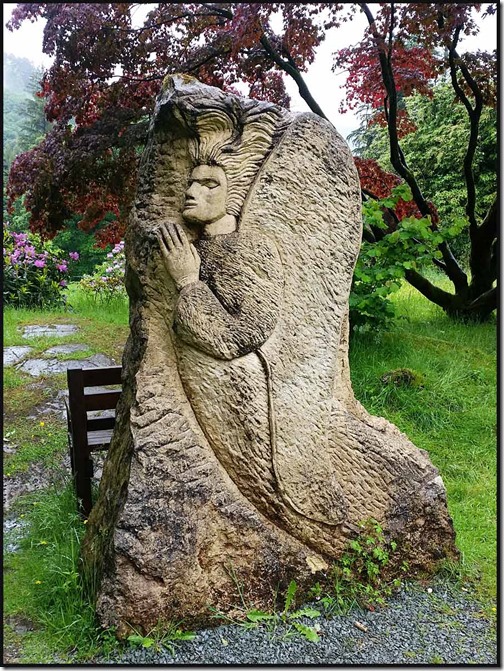 A tunnel in the garden led to a shed that overlooks Rydal Beck. More of a torrent today! 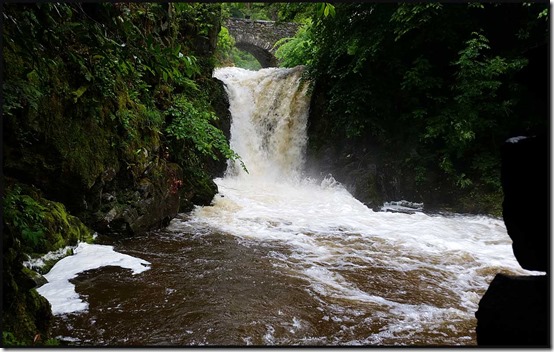 After dicing with death on the A591 motorway, Andrew calmly negotiated his team to a path on the south side of Rydal Water, which was just about visible through the rain. It was raining ducks at this point. They looked shocked. 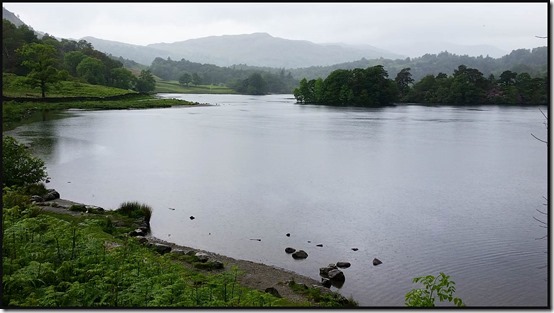 There was no tea room.

But there was a cave in which to shelter. Andrew and Co rushed in – pictured top – creating a frenzied blur that overcame the normal sensitivity of the official photographer’s camera. Here’s are some views from inside the cave, which according to the map is an old slate quarry. 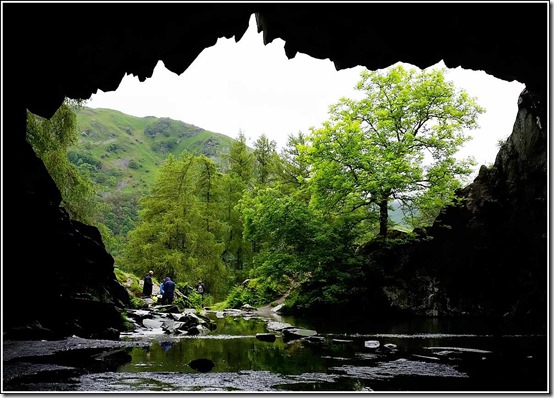 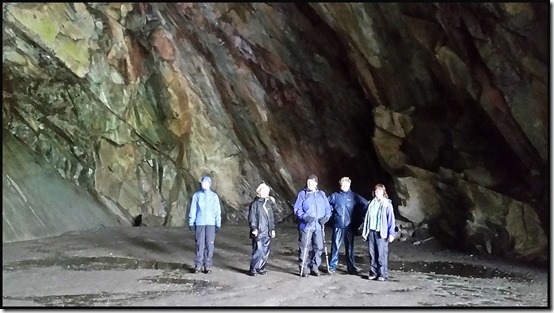 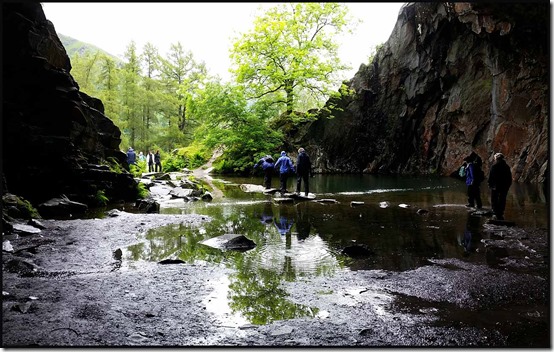 Sue E had been busy chuntering for a lull in the rain during the entire course of the walk. Her chunters eventually bore fruit as the group left the cave and strolled back to Grasmere along Loughrigg Terrace (a well constructed path). Gaynor’s ears were cold, so Andrew lent her one of his rather fine knitted skullcaps. [Andrew’s knitting skills are legendary.] 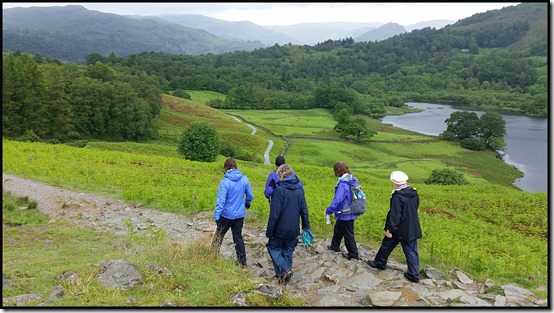 A short pause enabled those present to observe the quickly unravelling fronds of bracken, and foxgloves that actually grew into this picture of Grasmere and Helm Crag as it was being taken. 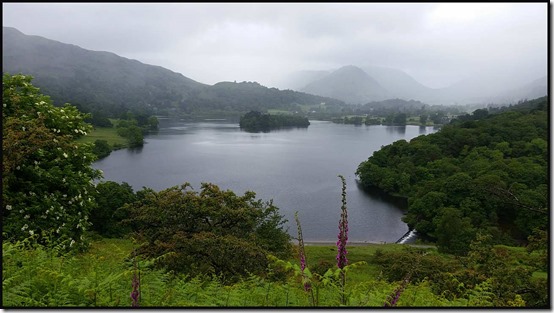 Everything was exceedingly green. 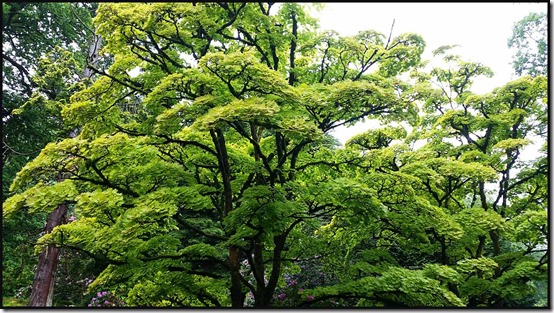 Back at Glen View, tea was served. David looked very dry. His heart attack had mysteriously cured itself. He had cheated. Elizabeth and Paul, said to be walking the Coast to Coast route, but actually travelling in a luggage van, were also there. They were very dry.

It’s shown below (click on the map to enlarge it). 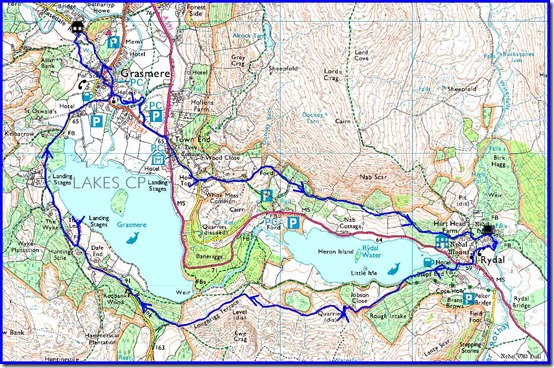 I believe a jolly time was had by all, and the shower might even have been mended so Glen View may by now be less smelly. But who knows? The lavatory is probably still full of umbrellas and components of Sue E’s hypnotising kit.

Ingenious excuses. Back in the 60s at a wild cap a dozen of us found that one member had not arrived back from the walk from the pub across the moors in the dark. A search was proposed - Jack, a rough-dick wool-sorter from Bradford was asked if he would join the search-party - his reply, "No! I've got my boots off now'"

Haha, no doubt David would assert that his heart needed a break.

(On a more serious note, we do hope you are ok, David.)