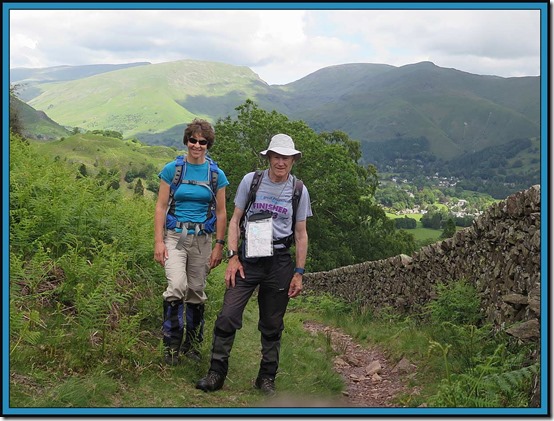 After our overcast and slightly chilly walk on Scout Scar, Sue and I moved on to Grasmere, setting off around noon after a leisurely pause for coffee and cake. The sun was trying hard as we headed out towards Kelbarrow and Silver How, our first objective.

We were soon in t-shirt weather on the gently rising path pictured above.

At a minor col with a division of paths, a right turn pointed us up this neatly paved staircase that leads nearly to the summit of Silver How after the steepest climb of the day. 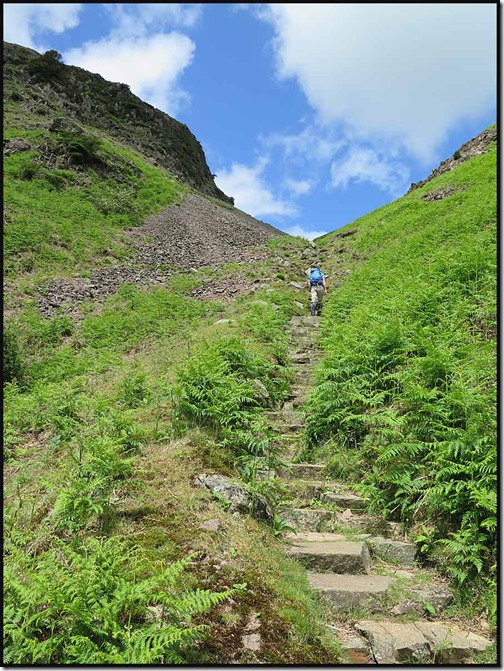 It was a lush green view down to Grasmere and Rydal Water from Silver How. 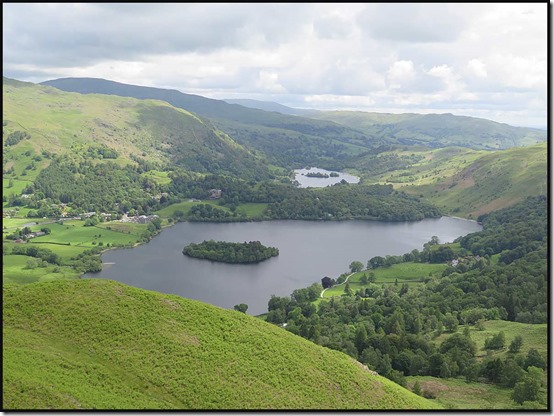 There's a cairn on the summit of Silver How. This is the first of eight Birketts, including four Wainwrights, visited on this walk. A 'Birkett' is one of the 541 hills included in Bill Birkett's book 'Complete Lakeland Fells'.

From Silver How there are fine views towards Helm Crag and Helvellyn, and a good path to Lang How, with the Langdale Pikes coming into view.

Here’s Sue on our second summit - Lang How, with the Helvellyn range behind. 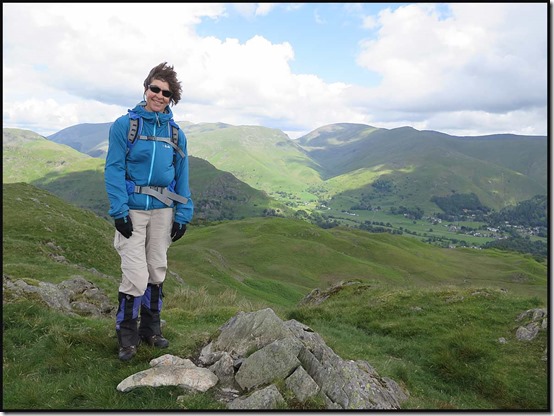 The highest point of Lang How is a few stones some way from the cairn at which Sue was pictured above.

Continuing along the broad ridge, this cairn marks the true summit of Swinescar Pike. It was now cool enough for a fleece. 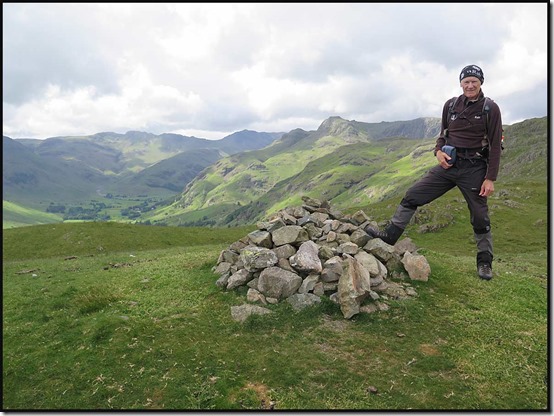 Looking back, Lang How's summit is on the left of a broad hill in the middle distance.

"I'll ignore the niceties of peak bagging and simply enjoy the view" this lady told us. 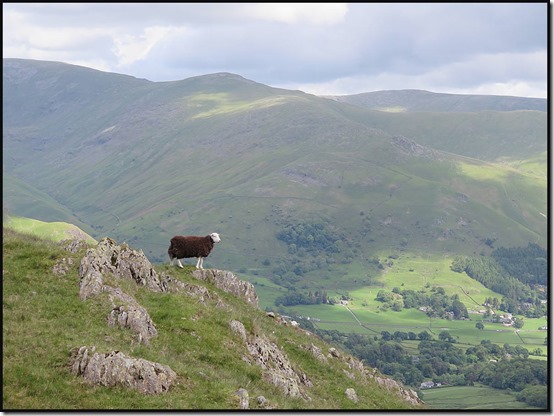 We came across what appeared to be a dead body. But it wasn't. It was just 'resting'. 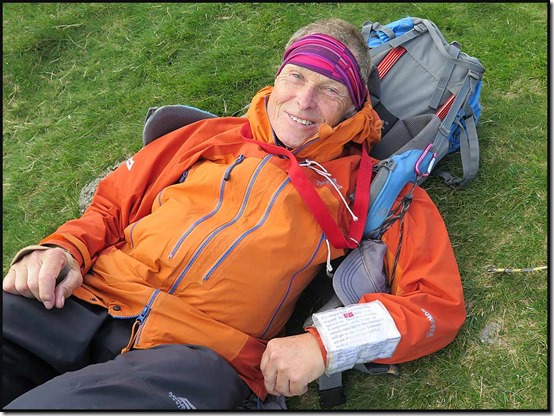 Written on his sleeve:

‘If I collapse leave me where I have dropped.
Do NOT touch me or speak to me.
Move away 30 metres and keep totally silent.
If I get any sensory input for the first 3 minutes I will get worse.
If after 3 minutes I am not improving then call for medical help.’

He was actually quite chatty, asserting that he had been so badly brain damaged at birth he should be spending his life as a vegetable – but is actually a bit better than that. He stumbled off down the hill shortly after we left him.

Castle How has three summits. We went to the equal highest that is the 'Birkett' summit, with good views back down the broad backed Langdale Edge that we had slowly ascended.

We continued upwards, with Crinkle Crags looming high in the distance across the valley, before reaching the fifth and highest summit on Langdale Edge, Blea Rigg.

A little further on, Codale Tarn came into view, with our descent route beyond it.

Pavey Ark and the Langdale Pikes were quite close by; they are quite easily gained from our next objective, Sergeant Man. 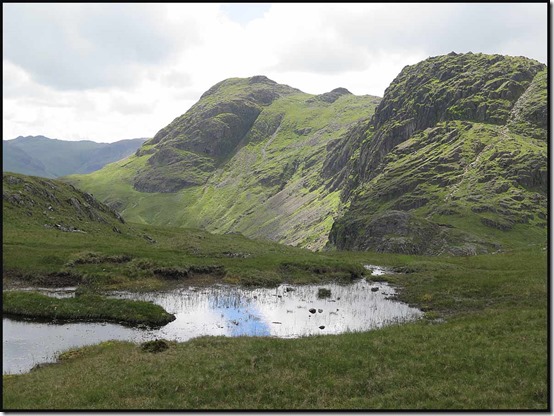 We met various folk at the head of Easedale, virtually the only people seen all day (on a ‘busy’ Sunday in the Lake District). They were trying to work out the route down to Stickle Tarn from the Easedale Tarn path. It's not that obvious

We rose gently up to our high point of the day, Sergeant Man (736 metres), from where we could look back down Langdale Edge, with Loughrigg Fell at the end before the descent to Windermere. 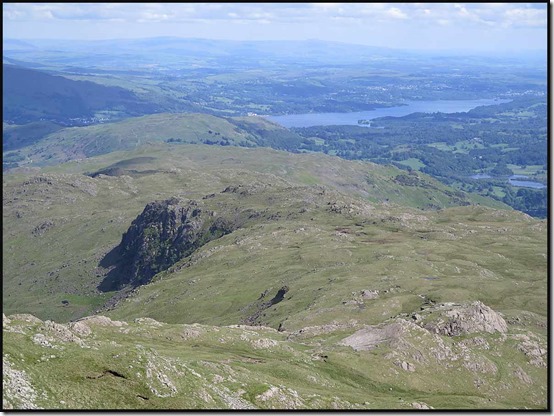 Sergeant Man is very close to our seventh summit, Codale Head. By now it was a lovely afternoon for our descent past wheatears and meadow pipits to our final summit, Tarn Crag, where we lazed for some time. 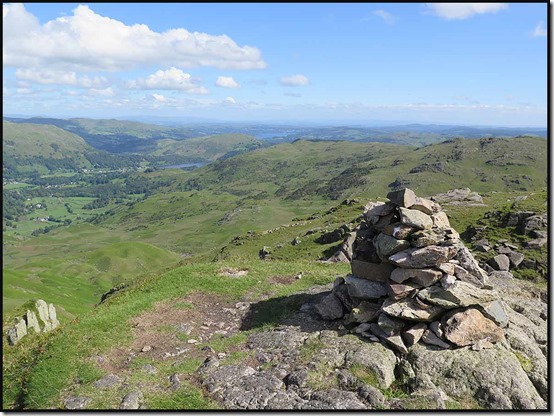 From here, we descended into Far Easedale on a faint path on our way to Grasmere.

After meeting nobody on the descent from Codale Head, we came across a family enjoying the sunny afternoon in Far Easedale just near where this final picture was taken. 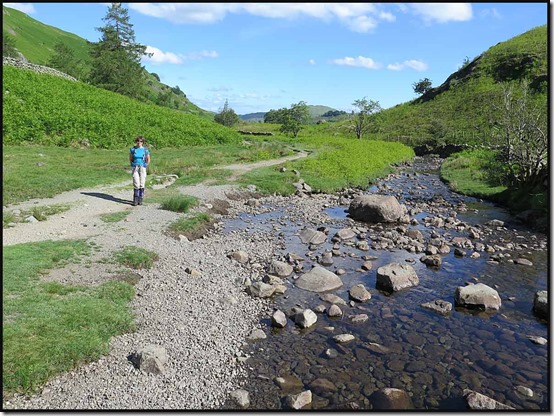 Our walk ended at Glen View, where we were staying. Here's the 16 km route, with about 900 metres ascent, for which you should allow 5-6 hours. A shorter alternative would be to miss the final three summits and descend via Easedale Tarn. Click on the map for a larger version. 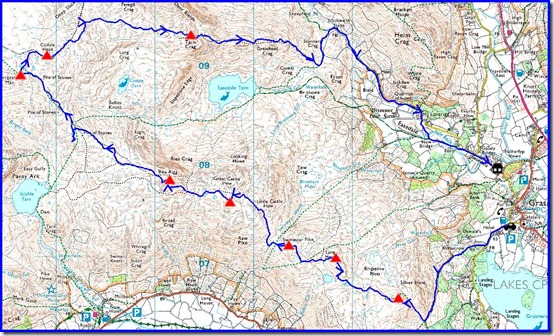 This walk proved to be an excellent choice for a busy Sunday afternoon in the Lake District, on relatively easy ground with great views.

Great stuff Martin. We were in the Duddon all weekend.

Thanks Alan, I look forward to reading your report...