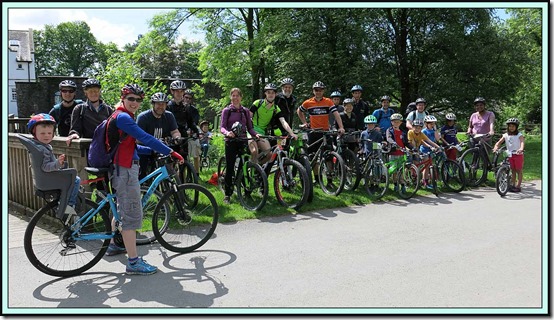 Well, Dave’s celebrations were over a period of four days. Unfortunately Sue and I missed ‘Killington Sports, Fell Race, Cake and Champagne’ on Day 1, but we hear it went very well. Sue particularly regretted not being there for the sack race. I was busy in the Berwyns with Cary.

Day 2 involved bouldering and climbing at Kendal Climbing Wall. Apparently Dave managed to fall off a boulder but he did get to the top of the wall. Well done!

Day 3 of the celebrations started at Grizedale Forest, where Sue went for a walk to wind down from the earlier very scenic parkrun at Fell Foot, and I joined about 30 others on a variety of different bikes, many of them hired from the centre.

Sue lined us up for the picture above before heading off on a sculpture trail.

The rest of us proceeded at a variety of different paces, mainly uphill, to pass our first landmark, Wood Moss Tarn. 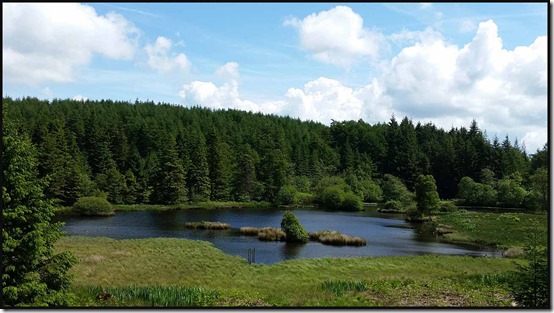 Luckily, it was a perfect day so waiting for the slower members of the group presented no difficulties. 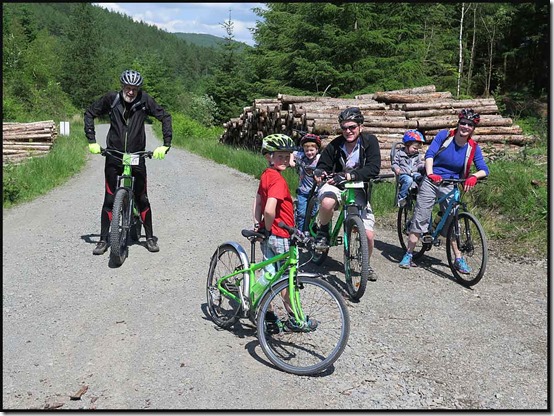 Dave and Lorna lined up with Martin and Robert for a brief photo shoot. Note Dave’s impressive (hired – they cost £4000) electric bike with giant tyres. He loved it. 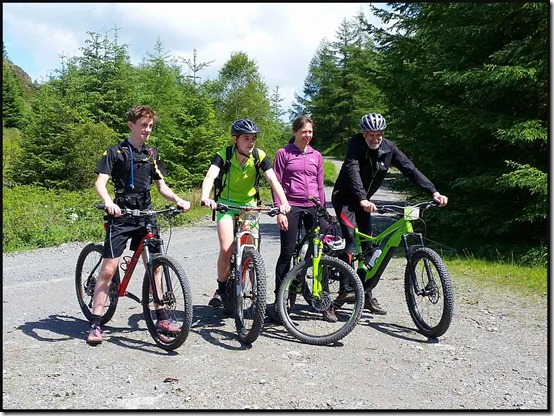 The following pictures were taken at random on the gravel tracks along which the early part of the ride was based. 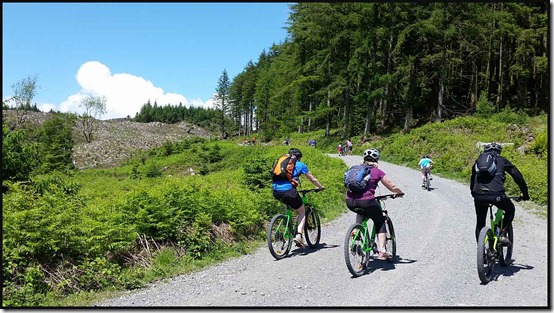 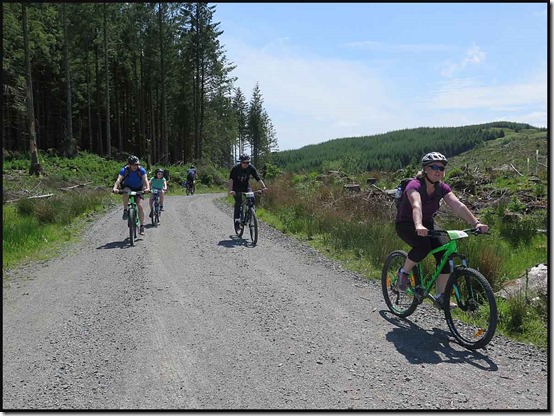 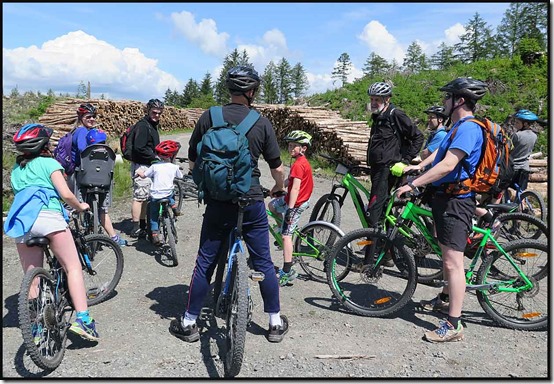 After more climbing we came to a fairly new viewpoint. The recently felled trees revealed a lovely view across Coniston Water. Dow Crag is on the left, Wetherlam on the right of the following picture. 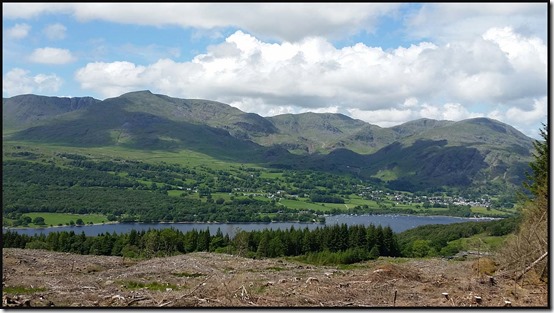 By now, many of the group had retreated back to Grizedale on what they called ‘the ice cream route’. That left most of the rest of us deviating from the easy gravel to the ‘rocky red’ – singletrack routes through the forest, built specifically for mountain bikes. Some of us did all the ‘red’ routes. I stayed mostly with Paul and his son Jacob (9). Jacob and I were the only members of the party without suspension on their bikes. That made us a little slower than some, but the rocky routes were great fun. 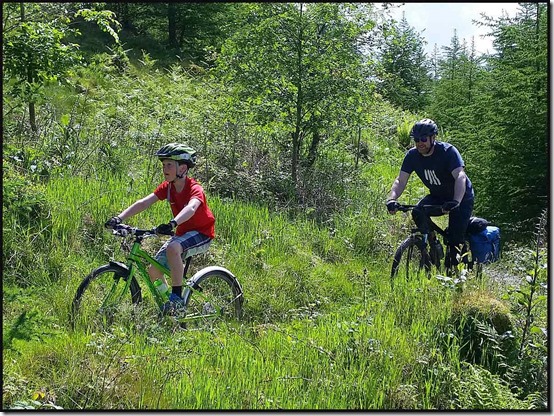 There were plenty of breaks to admire the views. By now we could see the Langdale Pikes in the distance.

Various ‘Action Men’ swooped along the lovely singletrack routes. Dave managed them all on his much heavier electric bike. 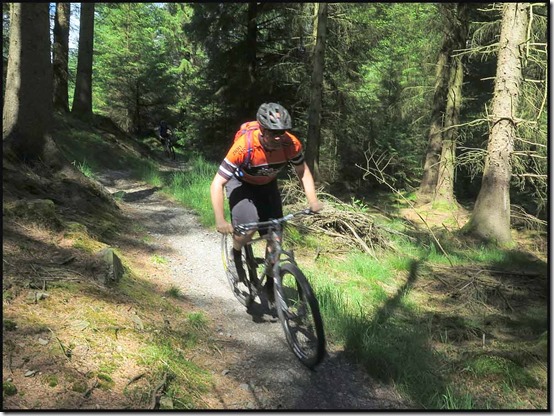 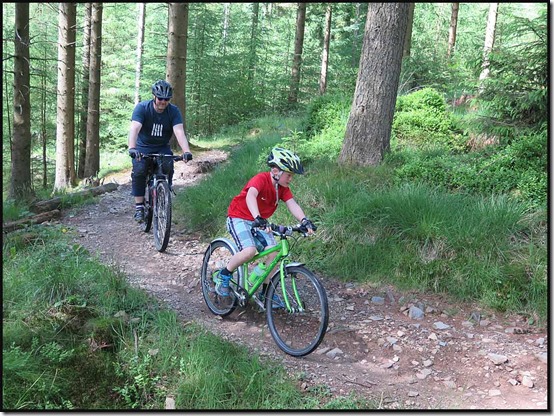 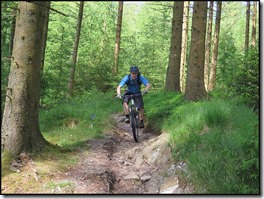 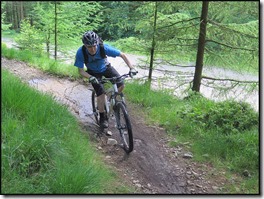 A long section of fast red track led eventually back down to the bike hire shop and a welcome pot of tea at the café. Then we adjourned to various accommodations (Kendal Hostel for me and Sue) before heading up to the local rugby club for a shindig in fine company with a great buffet meal.

Here’s our 21 km route with about 400 metres ascent. It took around 4 hours, but could easily be done in three. 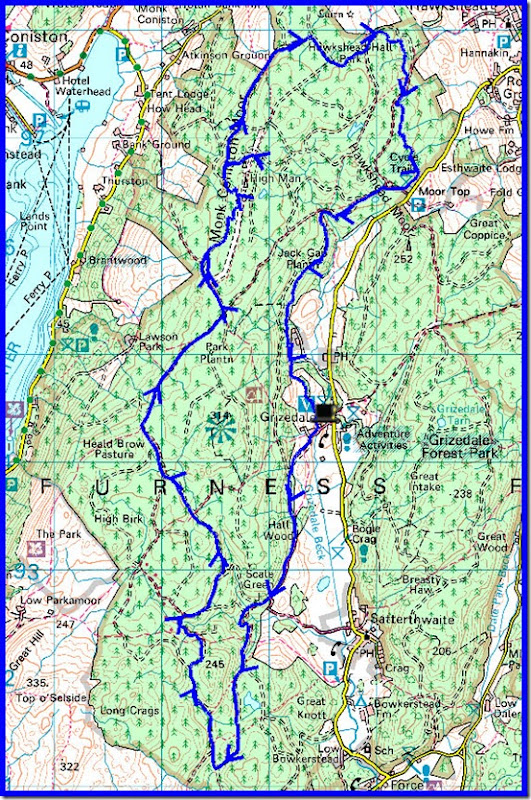 There are of course many other route options. It’s a great area for mountain biking.