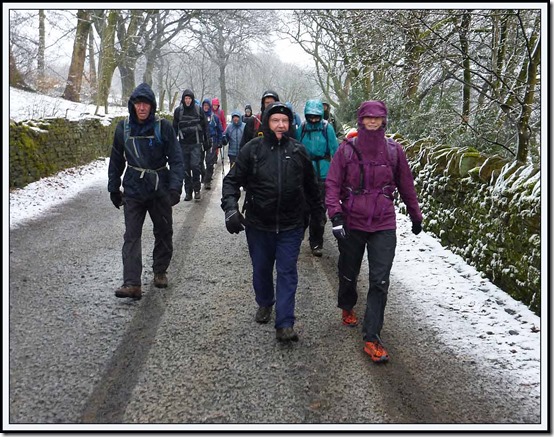 JJ and I braved the elements to drive to the outskirts of Bolton, a test for JJ’s winter tyres, and join 16 others on an East Lancs LDWA walk advertised by Norman as ‘A Little Ray of Sunshine’.

Rain in Timperley turned to snow as we approached the environs of Winter Hill, and by the time we arrived at the 9 o’clock start the planned walk over snow clad Winter Hill had been abandoned in favour of an easier circuit to White Coppice and back. Wimps!

Actually, given that Norman is nigh on 80 and there were other elderly participants, the decision may well have saved the local mountain rescue folks a call out as the planned descent route from Winter Hill is notoriously steep and slippery.

So we took a gentle route past Ormston’s Farm. 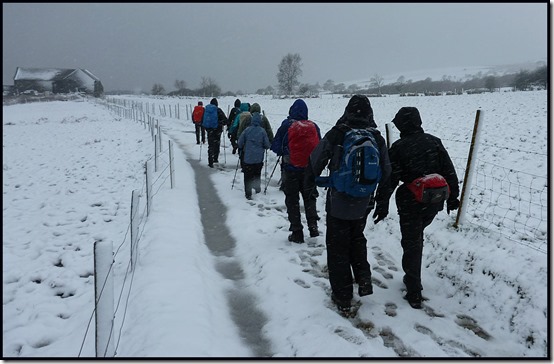 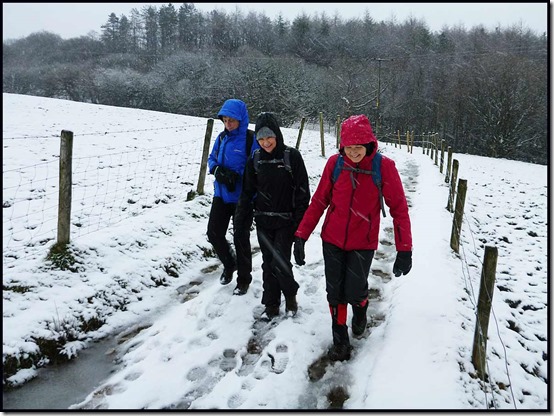 A suitable spot for a group photo was found. Despite dire warnings regarding the weather, it was only slightly inclement, the worst of the rain coming after we had set off back home. 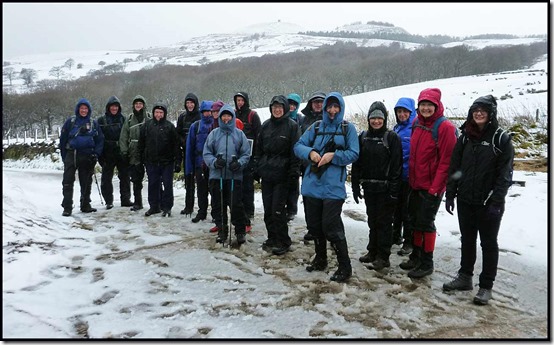 It was however rather damp underfoot. Some of those wearing trail shoes got rather cold and wet feet. 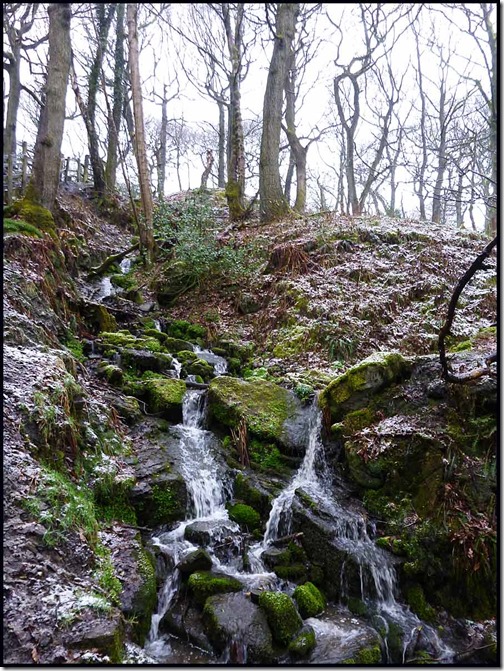 Whilst the Camellia in our Cheshire garden is in full bloom, spring seems some way off in Lancashire. 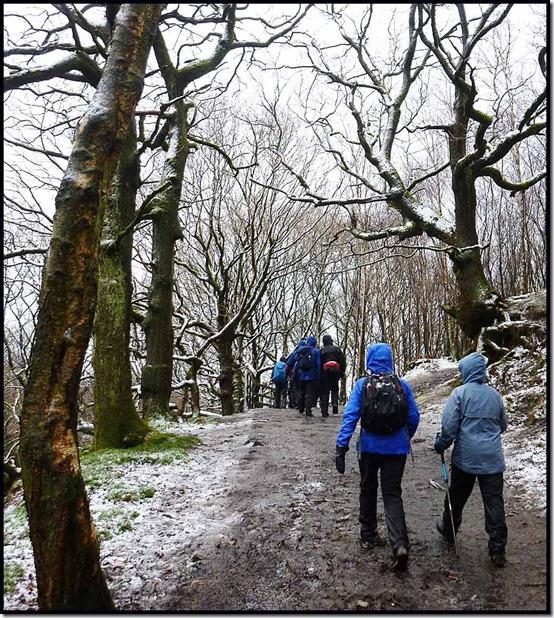 A random point above Anglezarke Reservoir was chosen for a five minute elevenses break. Well done Norman – it was spot on 11 0’clock. 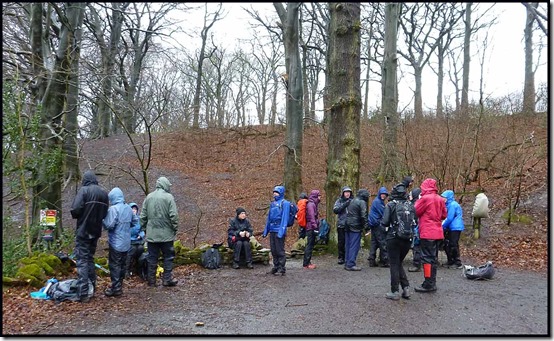 Suitably refreshed with coffee and cake, for some the pain of stream crossings became more like a jolly splodge. 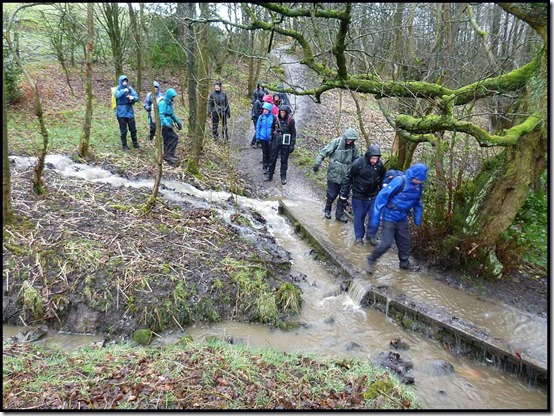 The familiar environs of White Coppice were reached well before noon, after we’d passed the aqueduct draining water from Anglezarke Moor. 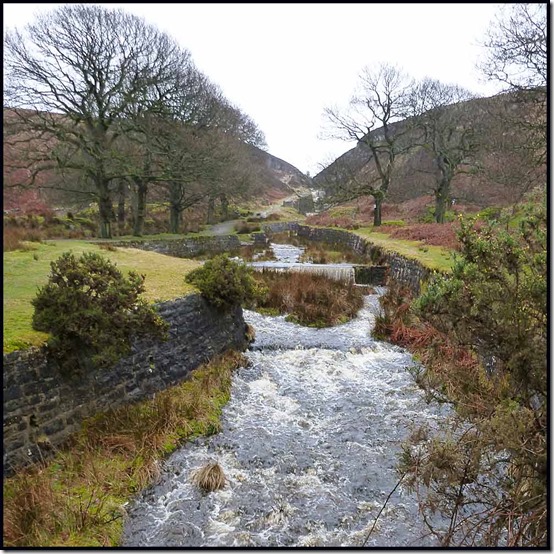 Despite Norman’s earlier promise, the café was shut, so we made do with lunch on some benches under the cricket pavilion. 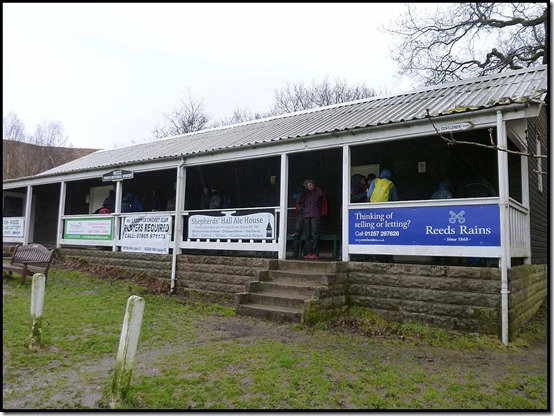 In a week or two folk in deck chairs under a hot sun will be watching athletes all clad in white testing the sound of leather on willow just here. 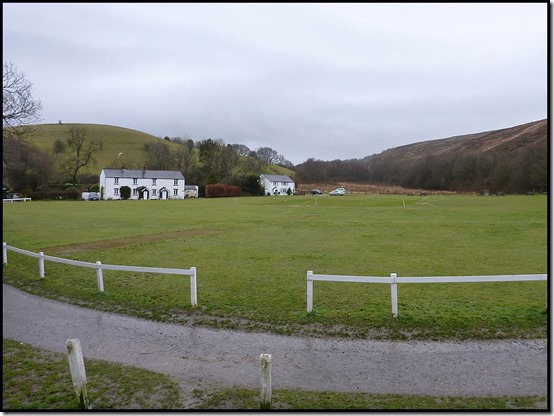 Nearby, after we’d departed from our lunch break, we noticed that a few daffodils have sprouted next to a small reservoir. 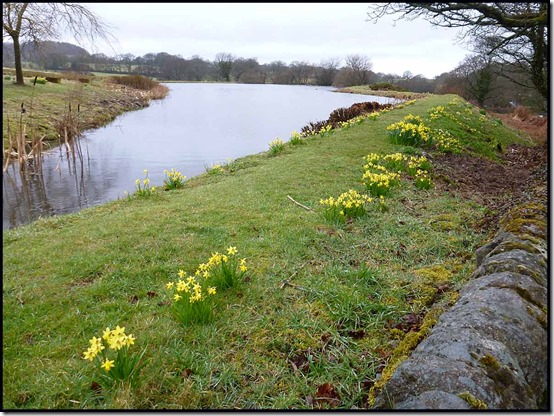 LDWA walks are judged by their length. Summits rarely feature. So it was something of a surprise to arrive at a summit – Healey Nab, an outlier of Winter Hill – 208 metres tall. Wow! 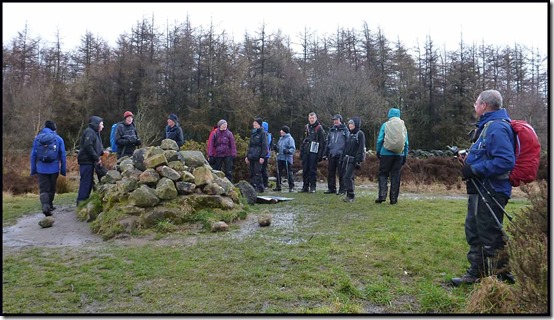 The walk progressed in fine weather past Anglezarke Reservoir then alongside Upper Rivington Reservoir. 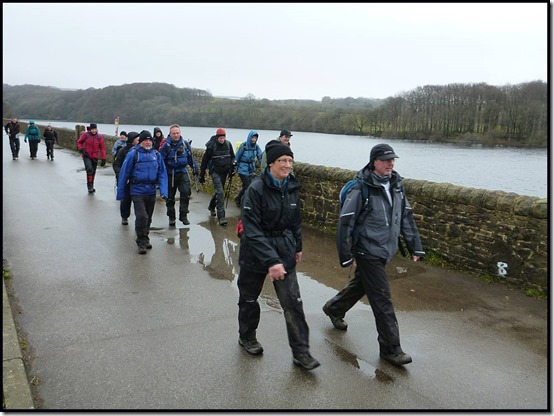 I thought they were speeding towards one of the cafés in Rivington, but it was not to be – Norman carefully avoided the fleshpots, in favour of a visit to the remains of 'The Castle', an incomplete scaled down replica of Liverpool Castle, intended as a ruin. Another five minute break was declared, but most of us were bereft of provisions and only sustained by Hilary’s generous hand out of a variety of sweets. 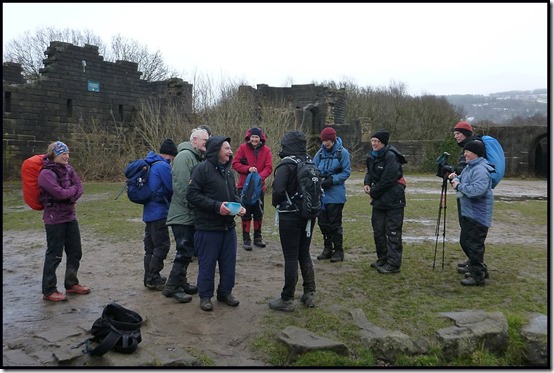 The congregation was enthralled by Norman’s stories of his youthful exploits on escapades like crossing the weir at Whalley and the stepping stones at Jumbles. Happy Days! 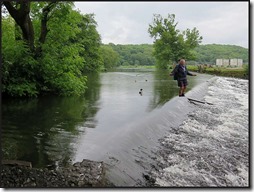 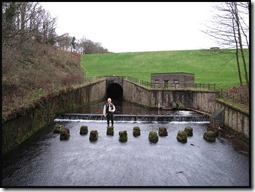 All good things come to an end, and after more pleasant paths on the edge of Horwich’s housing estates we reached our outward route for the last few minutes back to the start of the walk, and a drive home in driving rain. Thanks to JJ for the lift.

Here’s our route – about 25 km with 500 metres of ascent, taking us six and a quarter hours including breaks. 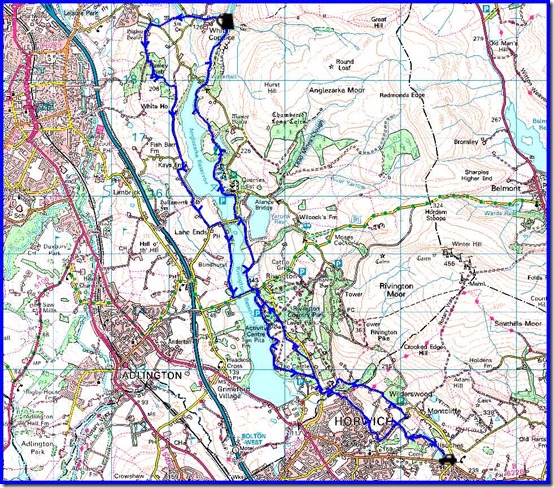 Thanks to Norman for leading this walk in excellent company. It was good to be back with the LDWA crowd after a long break. Hope to see you again soon…

Sounds formidable - works out at 2.5mph including stops - pretty good going, especially in those conditions.