Sunday 11 November 2018 - A Circuit from Tudweiliog 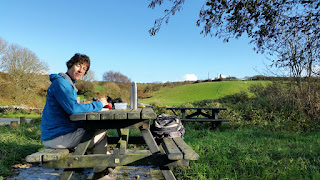 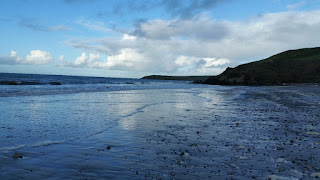 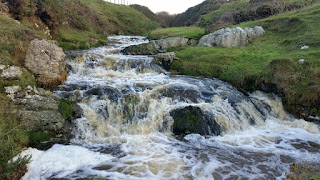 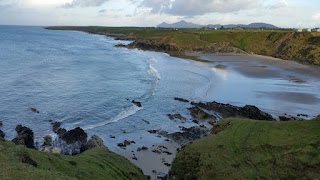 Rain overnight and into the morning drummed on the roof of our abode in South Snowdon Wharf. So we enjoyed a lie in, having driven down to Porthmadog yesterday afternoon and later enjoyed beers with D, who is staying across the road from us.

With strong winds and heavy showers predicted, we eventually set off to the Lleyn Peninsula for an easy stroll. Parking at Tudweiliog, we took the quiet country lanes, apart from a few muddy fields, to Pont yr Afon Fawr car park, where - after 5 km of walking - we noticed that it was 1 o'clock, time for lunch at a convenient picnic bench.

A path led from here to Traeth Penllech beach and the Welsh Coast Path. We followed that path with the sun and wind behind us all the way to Towyn, seeing nobody until we were in sight of our destination. A very pleasant section of coast.

Though there was no significant human presence, there was lots to be observed today. Crows and starlings gathering in large numbers and competing as to who could make the best swirling patterns in the sky. Not surprisingly the starlings carried off that trophy.
A single shower interrupted our dryness but as it was followed by a sunny period we enjoyed some lovely rainbows. At Porth Ysgaden there's a ruined house comprising just one wall with a fireplace. Beyond that are a few shacks that may be connected with the fishing industry, though I can't quite work out the logic for that.... What else could they be used for? Computer gaming software development?! Lots of different birds, both on the walk and later on the estuary at Porthmadog as the tide went out. We were back at home by 4.30 after this 13 km in 3.5 hours stroll. Plenty of time to prepare a roast chicken meal, enjoyed with our guest, D, (or are we his guests as he owns the house?) who then proceeded to thrash us at prediction whist. Meanwhile a touch of glee all round as Man U succumbed to their more talented neighbours, and Wolves held the mighty Arsenal. Today's pictures start with lunch and continue up the coast to Porth Towyn, where an elderly lady was enjoying a lonely swim.
Posted by Phreerunner at 21:47

I reckon the Welsh coastline is the best in England, although I seem to remember having this discussion some time ago and coming to the conclusion that others, for example the SW Coast, are just different and we shouldn't really compare. I like the picture of Sue looking pleased at having found a quality picnic table a - change from sitting on n uncomfortable rock and then finding that table thirty yards round the corner afterwards.

Thanks Conrad - I just told a local about the Welsh coastline being the best in England. I haven't got my ball back!

The clockwise route we took was perfect. High hedges of the quiet lanes protected us from the sun and wind; the picnic table was perfectly placed and timed, then the lovely coastal walk was undertaken in bright conditions with the sun and wind behind us. It's a shame the mobile blogging restricts me to five pictures.

I love that comment Conrad. I have a spare spade if needed.
I can’t argue against your assessment of the big game. City were magnificent and controlled the game start to finish. Utd were a dismal shadow in 2nd place. If there could have been a lower place than 2nd then they would have filled it. While Mourinho is calling the shots there will be no change in tactics and no ground gained.
Wolves play good footy but lack experience. I was surprised with their result, I thought they would lose - glad they didn’t.

Duh! I was just conccentrating on not including Scotland.

Haha Alan, it was (as you probably realise) just a throw away comment based solely on the scores seen in the news. I have happy memories of watching Wolves in the Billy Wright era, and of watching City when I lived within shouting distance of Maine Road in 1967/8.