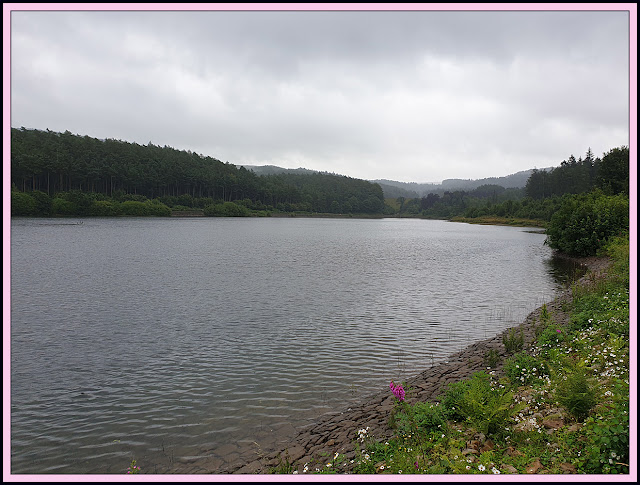 Paul and Jeanette had never been on Shutlingsloe with a daytime view, their visits having taken place only on the evening walks I arrange every December. So this was their chance.
One of my favourite walks is this one from Jen Darling's 'Pub Walks in Cheshire' book. I last did it by way of a recce for Jen's third edition, back in January - here's my report.
Today Paul S also came along - we thank him for the lift - and as predicted there was a bit of rain.
Ridgegate Reservoir, pictured above, was fairly benign in the drizzle. A cormorant was flapping its wings in a vain attempt to dry them, whilst a great crested grebe seemed to be relishing the weather, and martins were skimming the insects from just above the surface of the lake.
Early on the ascent, Jeanette and Paul were showing signs of dampness. Despite her Gore-Tex lined Brasher boots being on only their third outing, Jeanette would soon be able to wring quite a lot of water from her socks. 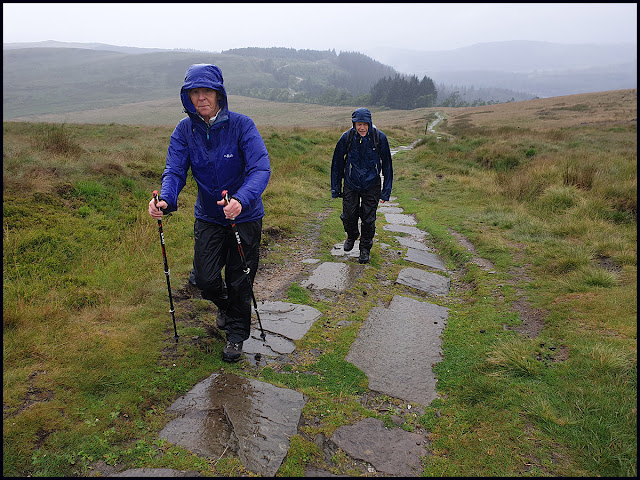 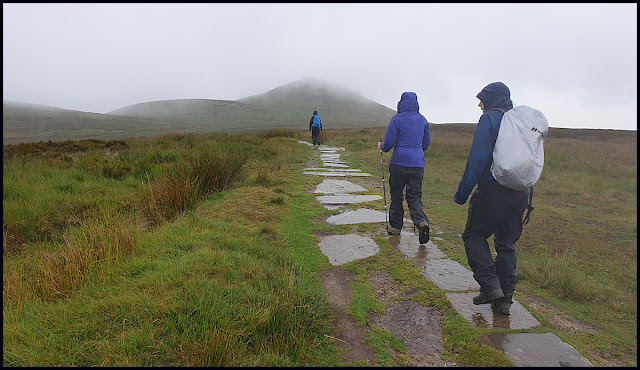 The summit of Shutlingloe had a little cap of cloud, but never mind, we could see more than on those evening visits in December.
New railings have been installed on the steep final ascent to the summit, the first of many recent path improvements that we noticed during the course of the morning. 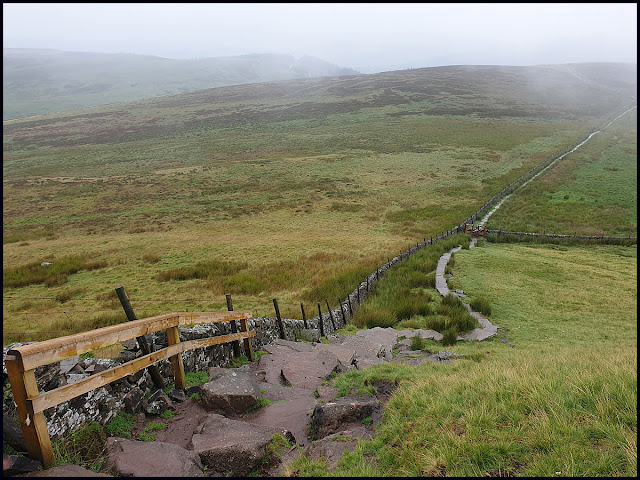 Here are two Pauls and Jeanette, peering through the cloud in an effort to catch a glimpse of the Roaches. To their left, we could see across to Shining Tor and the Cat and Fiddle. I took a picture but excluded it from this posting due to 'excessive greyness'. 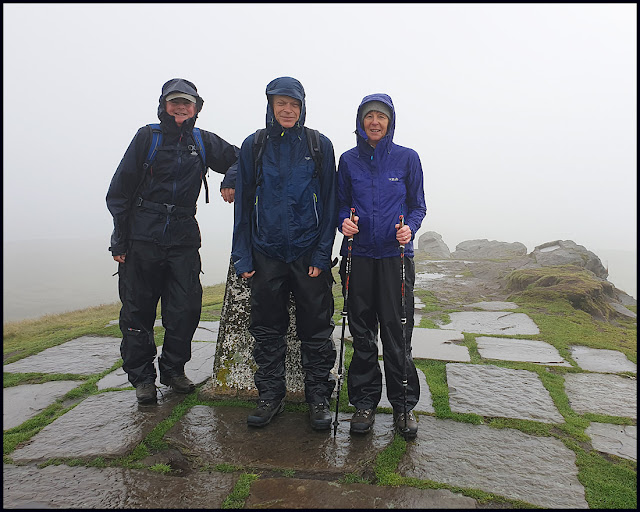 We paused for coffee etc at the new metal kissing gate on the descent that I noticed on my last visit, then we passed the Crag Inn (we'd have stopped if half an hour later, when it would have been open), and continued through fields punctuated by brand new gates and signposts. 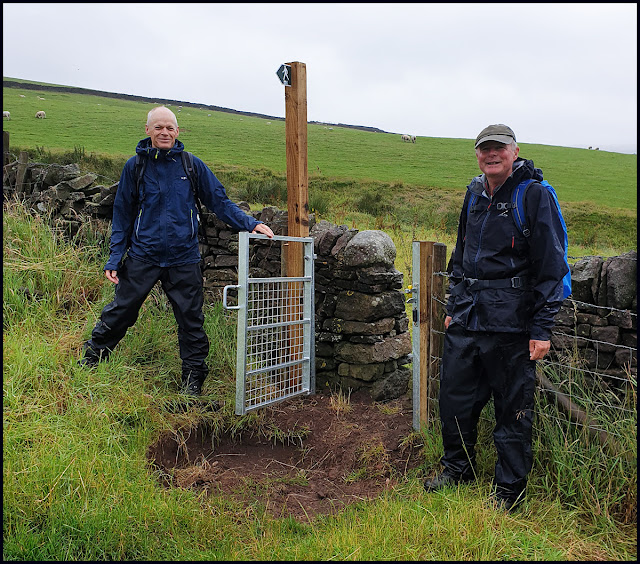 The path beside Oaken Clough is very pleasant. It stopped raining here, which seemed to surprise my camera as the next picture came out devoid of the usual rich colours I've come to expect from the S9. 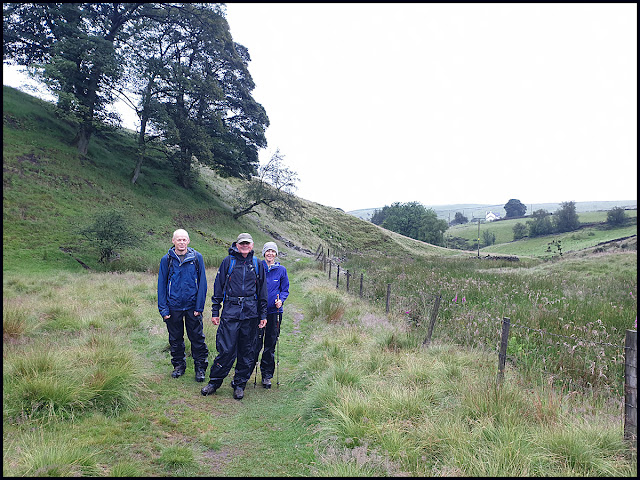 Oakenclough - a large, smart house surrounded by trees, looks like an oasis from here, with Shutlingsloe lurking behind it.

A wonderful sunken lane leads down to the Hanging Gate pub. 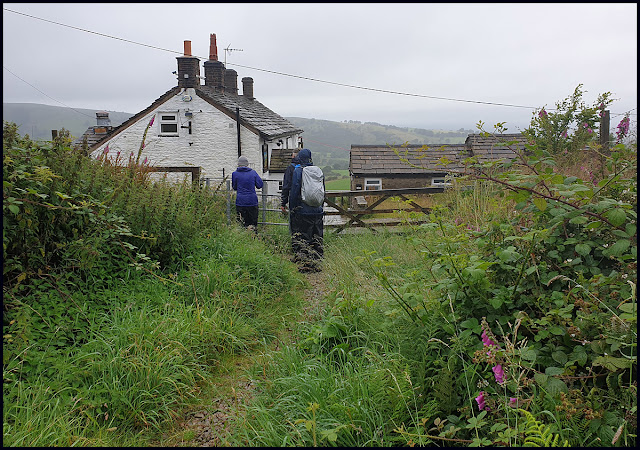 Sadly, the place is still closed. There was no work going on today - lots of bits of work in progress visible inside, and a fine decked area below the building. 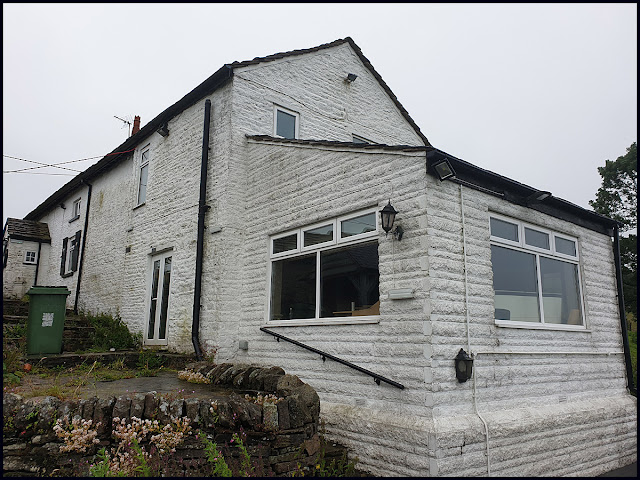 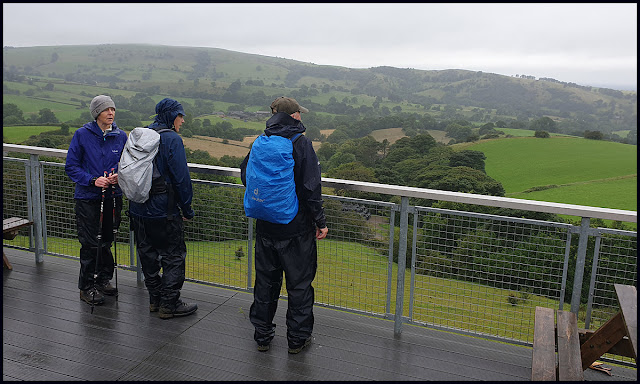 The decking looks new. Hopefully the place will re-open at some point.
Descending from the Hanging Gate, we joined the Gritstone Trail. The 'no sledging' signs have been here for as long as I can remember, but the Gritstone Trail signs are brand new. 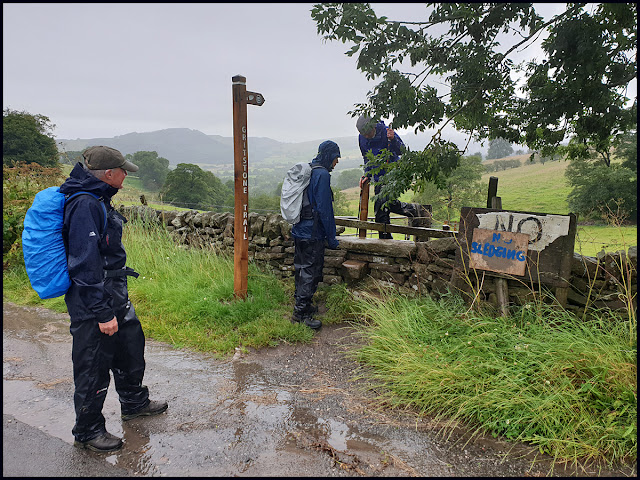 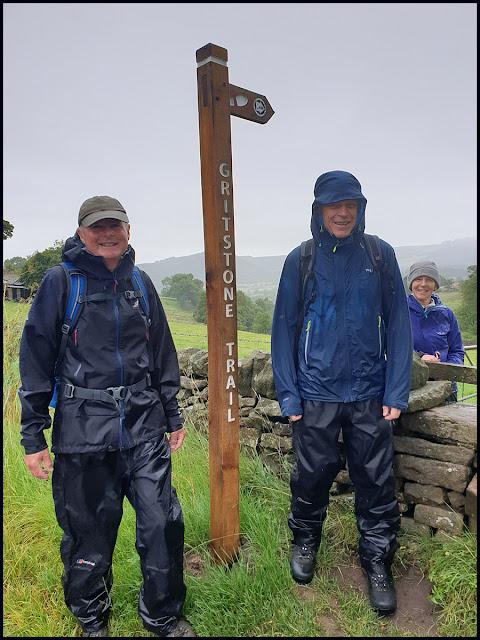 From here, it's an easy stroll back to the Leather's Smithy, taking care to leave the Gritstone Trail in favour of a narrow path to the right, shortly after passing between a posh house and a duck pond.
Coffees went down well in the pub (thanks, P&J), then we went home for lunch (and in some cases, to dry out).
It's a little over 12 km, with about 400 metres ascent, taking three hours at a modest pace. An excellent route, and as noted earlier - one of my favourites, even in today's damp conditions. 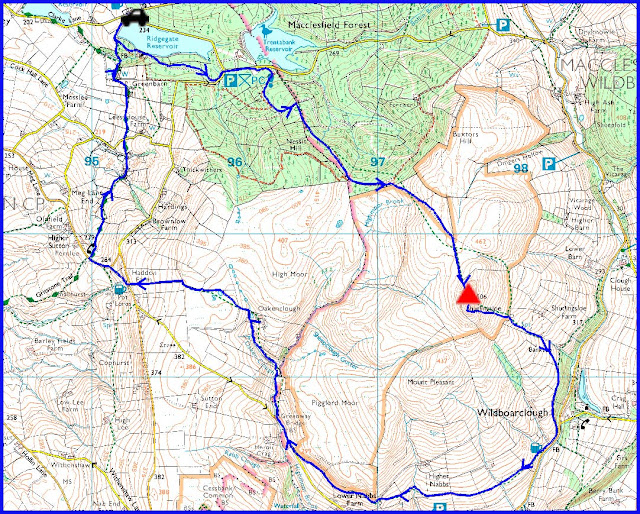