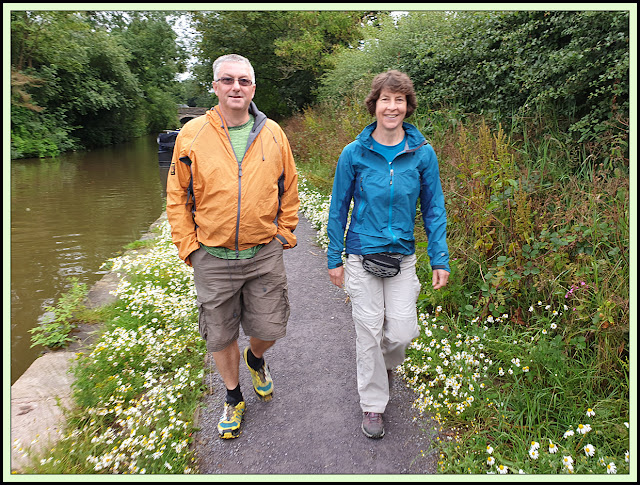 SWOG's latest evening walk found us assembling in a relatively small group of fifteen, in a car park in High Lane, on the A6 near Disley. Rain was expected, hence the low turnout.
Pam led and Paul took to the rear - except when Sue and Colin took on that position, as we marched along the Macclesfield Canal towpath towards Marple.
Bridge number 9 appeared to signal our departure from the canal. 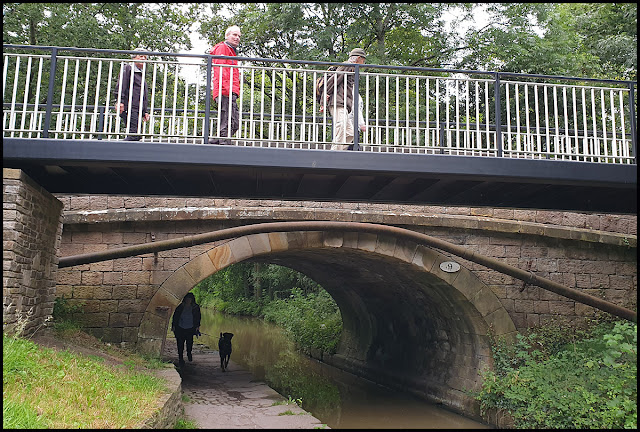 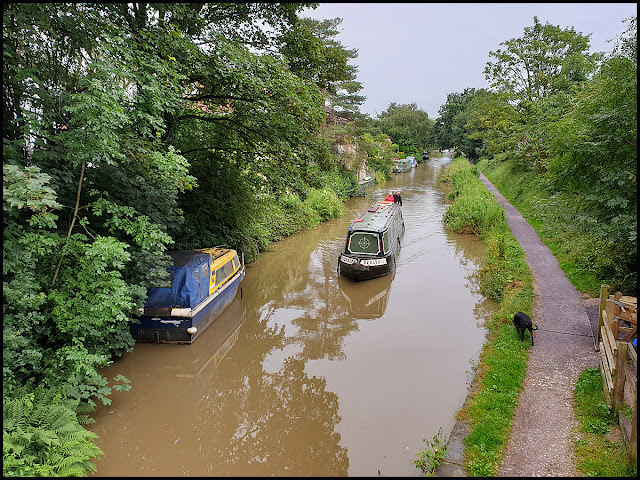 Not so, as over the bridge we went and commenced a battle with wet grass, nettles and brambles on a footpath bordering the canal that was a fraction of the width of the towpath on the other side.
After a while we did leave the canal, and we enjoyed quiet paths in the Hawk Green/Marpleridge area. It drizzled for a while; the grass here looks as if it needs a drink.

Soon the vegetation returned and we passed through an area where the nettles were covered with black caterpillars. I think Conrad has also seen these recently. I believe they are Peacock Butterfly caterpillars - the butterfly is rather more attractive than its caterpillar! 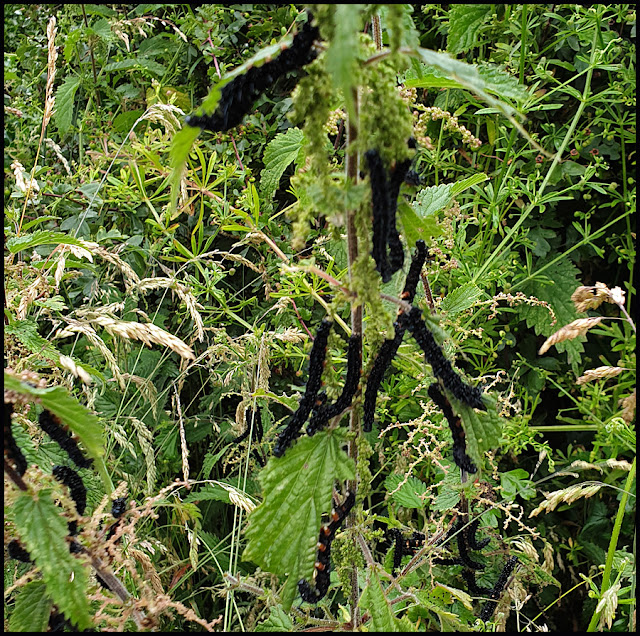 Soon we reached the canal towpath again. A bit disorientating for those who didn't realise this was a different canal, the Peak Forest Canal, which joins the Macclesfield Canal in Marple. 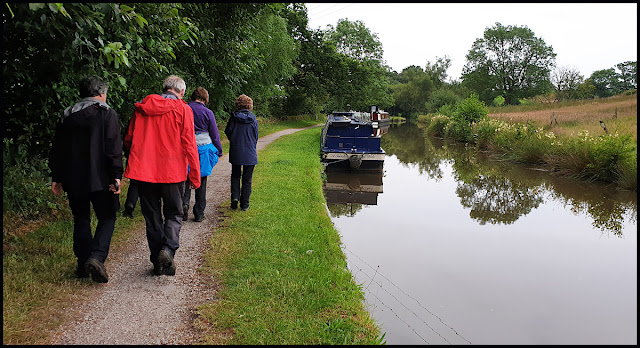 Near Strines, we left the canal and headed through fields, back to the Macclesfield Canal, where some remedial works were soon encountered. We must have passed through these earlier without me noticing! 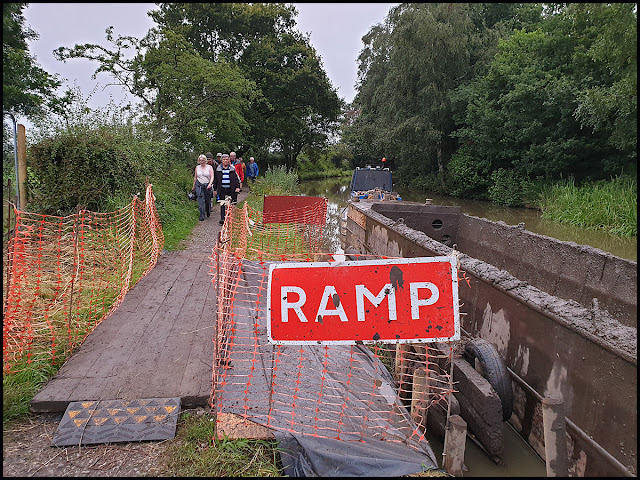 Then it was a simple stroll along the towpath, passing through a mixture of urban and open countryside areas, and finally being drawn up some steps by the lure of the Bull's Head. 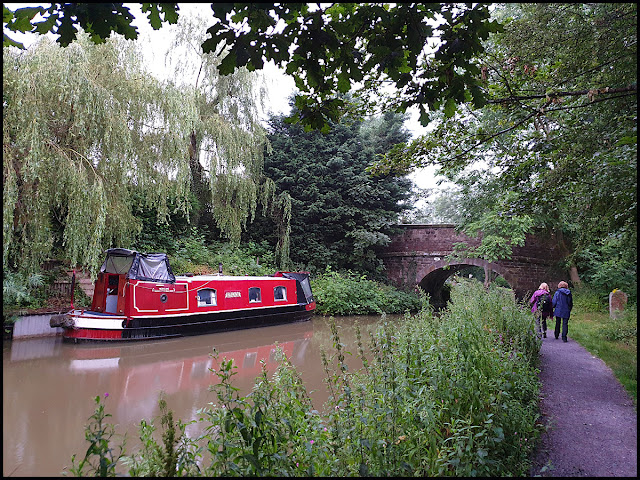 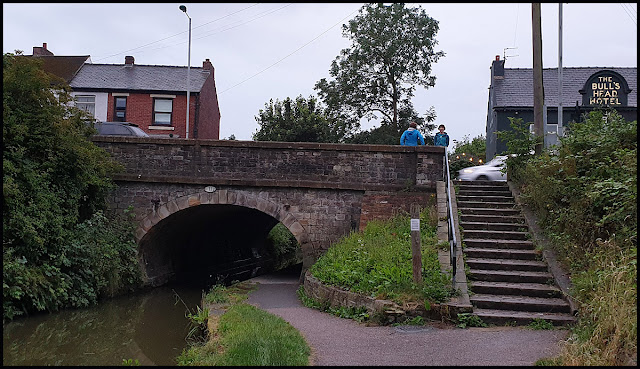 A very pleasant 7 km outing with about 70 metres ascent, taking us about an hour and three quarters.
Here you can see why I've called it a 'lollipop', albeit a melting one, 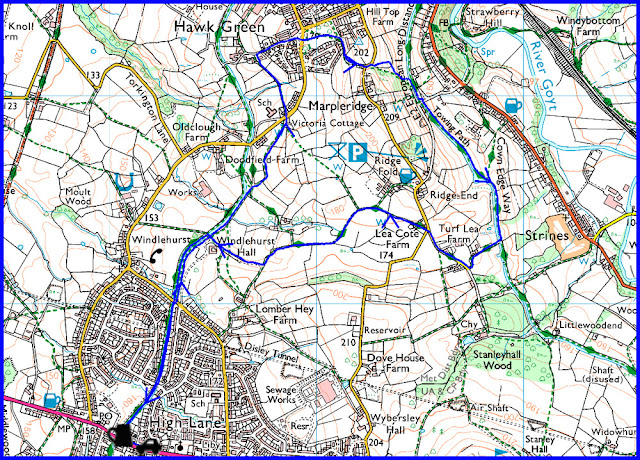 Thanks to Pam and Paul for leading the throng around this pleasant route.

Oh dear! Shameful memory from 2013 when I walked a large psrt of thr Cheshire Ring;- from my journal:

What a start. I found the canal at Marple and marched off determined to get in some quick miles, so it was a bit heads down for a couple of hours until I came to a sign that said Disley. I was on the wrong canal, the Peak Forest instead of the Macclesfield. I hardly dare tell of this but there you are.

I had to trek across country to reconnect. The only consolation was that I had been travelling more or less in the desired southerly direction.

Hilarious, but Disley is ok, and the walk through Lyme Park would have made a change from the towpath...