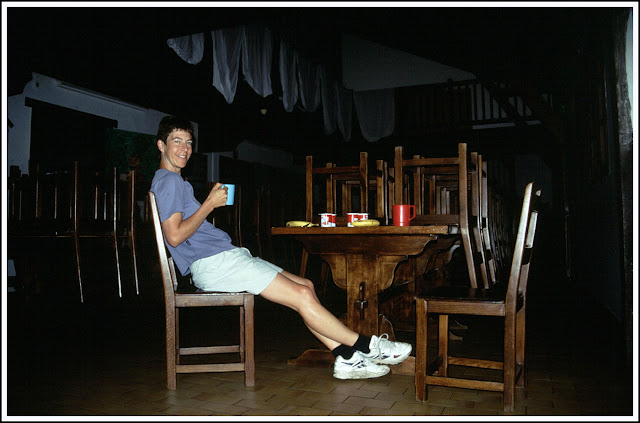 Superb ridge walk, cloudless afternoon, camp at 685 metres. Good views – 7.25 hours, 14 km, 1300m ascent
Last night nobody else arrived at the gîte, which looked as if it normally housed masses of school kids.  We had a lovely meal at the local restaurant.  Tonight will be our first night cooking in the tent (or near it, it’s very sunny here).  The tent is at a ‘wild camp’ just above the d’Ispeguy.  We can use facilities at the col.  We have good views into both and .
Today’s route was great.  We climbed up to a summit at 1044m, where it was still enough to brew up.  The ridge narrowed and the views widened as we dropped below the cloud.  Had a favourite lunch today – tins of fish!  The ridge continued all afternoon and the sun came out, making it all quite steamy.  There are pigs here, snouting through the bracken, and horses who obviously like to be fed.  We should see sunset from the tent.


After a night alone in quite a large gîte, we had the place to ourselves for breakfast - yoghurt and banana - and the now customary 8.15 departure.


The cloud was down over our route. Sore feet meant we were both in trainers (mine stayed on all day due to a sore ankle from the new boots).
It was humid and we soon got up a sweat on the long ascent to a col at 460 metres (we started at about 130 metres), where we paused briefly for water at 9.20 am. 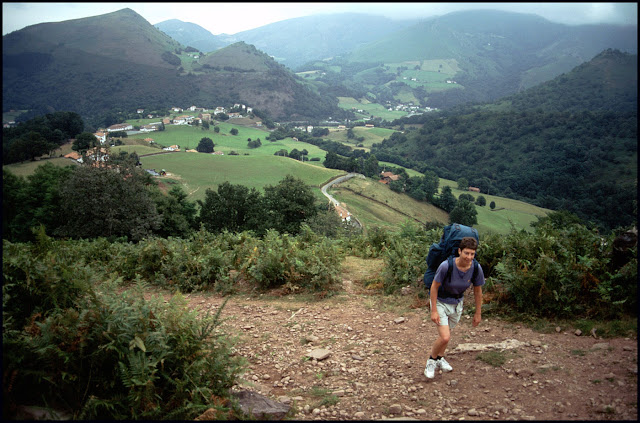 Traffic noise on the main road below was slowly diminishing, and no one else was on GR10, which we followed for most of today. A very pleasant 20°C here, but cloud hovering ominously despite this sun trying to shine through. Go through a rocky area before reaching a grassy plateau at about 740 metres at 10 am.
Lots of circling vultures, ravens and smaller birds of prey, possibly kestrels. Shepherds are moving the huge flocks of sheep around. Perhaps they are up here overnight.
There's a cool breeze, but the sun looks as if it may be winning. We reach our first 1000 metre peak of the trip at 11.05, 10 minutes ahead of Georges Véron's 3 hour estimate.
Two French day walkers pass, and two backpackers who Sue thinks are American. It is Pic d'Iparla (1044 metres). 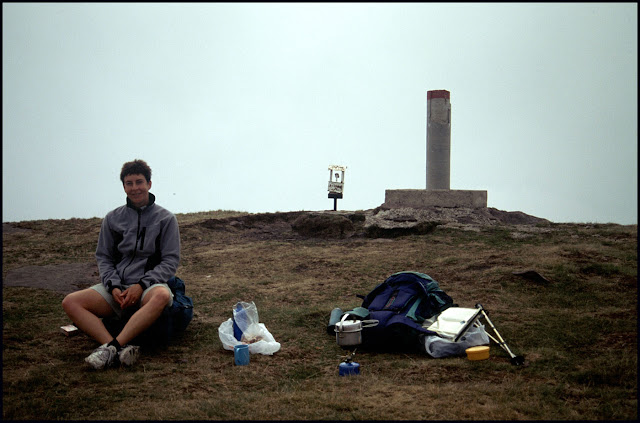 We have a leisurely half hour brew in the lee of the breeze, hoping for the cloud to lift. We just get occasional glimpses of hazy vistas. But from now on the cloud did lift, we got extensive, if hazy views, and by mid afternoon the sky was cloudless and we were sweltering in 27°C at 1000 metres.
We stopped for another half hour - 12.35 to 1.05 -  at d'Harrieta, 808 metres, after meeting more people. Another brew, only an hour after the last one, in this pleasant glade. Tins of mussels (me) and sardines (Sue) made for an excellent lunch, supplemented in Sue's case by Mountain Mix from Unicorn, which is still going strong.
Sun tan cream applied, and with Sue now in boots, we move on along the fine but easy ridge, to gain our second summit of the day  - Pic de Bustencelhay - 1028 metres (that's excluding a number of minor summit which probably wouldn't make 'Munro' status).
15 minutes here admiring the views, and with our destination in sight. We would be able to see the , perhaps for the last time, if it wasn't so hazy.
And so, down to a col where we leave GR10 and continue along the ridge to  d'Ispeguy, at 670 metres our highest sojourn by far. Sue quickly gets cokes and affirmation that we can camp anywhere. We enjoy more cokes before taking our possessions 50 metres up the slope behind Venta Ispeguy and spending the rest of the afternoon in the sun.
We arrived here at 3.30 pm. and can see a diminishing number of car tourists admiring views into and . We get these views from our perch, and there are pigs snouting and Pottocks looking for food from tourists. We hope we won't be disturbed overnight. The tent is on a bit of a slope.
Cyclists have a wonderful freewheel down into . Considering we are 100 metres from a road, it's idyllic. Both of us discover more bites - there must have been mosquitoes in the gîte, where it was too hot for sleeping bags.
And so - a leisurely evening in the sun with panoramic views, leek and potato soup, couscous with lomo meat and chasseur sauce, followed by a beer for Martin, angel delight ("bonkers butterscotch") and Highlights hot chocolate. Superb. 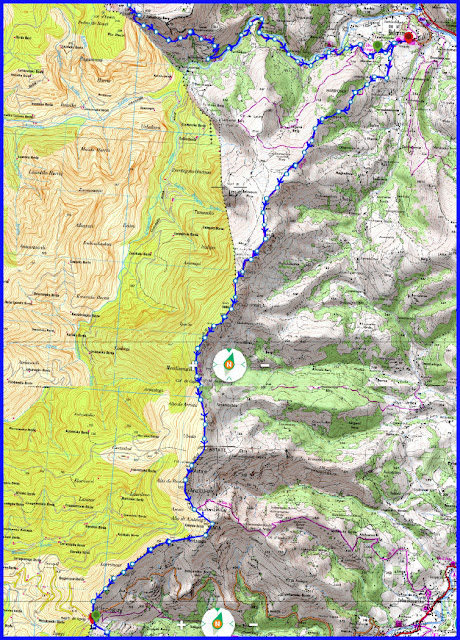 Your next to the last photo: you toil for ages uphill imagining projecting yourself into wilderness where maybe man has never trod, then you come over a ridge at the high point and find the domestic scene of cattle browsing. The Pyrenees are very special.

I think they are sctually horses in your photo but no matter.

Yes Conrad, they are horses, this being a Pottock zone, but as you say, no matter...