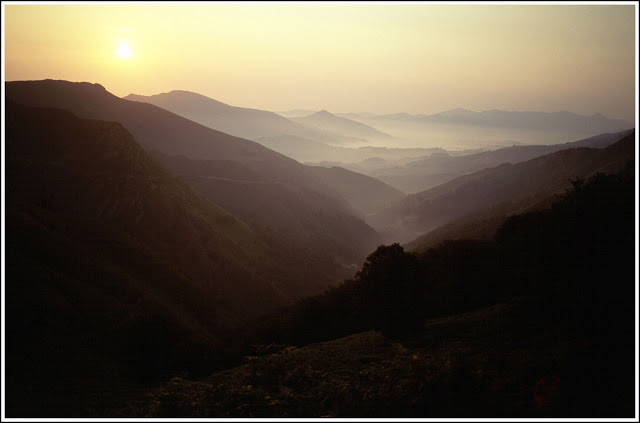 
Scorching hot day.  We got to Les Aldudes by 2 pm and stayed until 4.30, drinking lots, washing clothes, and trying to avoid the heat.  Paddled deeply in a river in order to recover a t-shirt that blew away whilst drying in the breeze.  Then up to a wild camp on a ridge in a breeze, but still very hot – had to hide behind the tent for a while.  Lots of horse bells to lull us to sleep.  Or not! 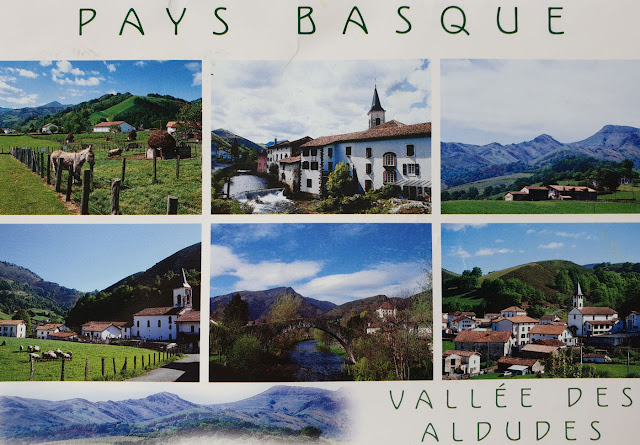 Diary Entry (by Sue)
I'm sitting in as much shade as I can find behind the tent, just above a col at 840 metres, after an 8 hour day which was the hottest yet.
Despite the vantage point of last night's camp, we were in bed before sunset, and despite the slope we slept till 7 am. A cloudless morning, with a lovely sunrise on the French side, pictured above, with wisps of mist in the valley.
We left at 8 am, after a few words with the two girls who pitched their tent just below ours during yesterday evening. It was to be a warm day and was 24°C at 8.30 already!
Initially, the path climbed gently through beech woods to a col. Tits sang in the dappled light. Above the trees, a stiff but warm breeze picked up. The beech woods were a big feature of today, and we welcomed the shade when they provided it. We declined a deviation to a summit at over 1300 metres, but visited another at 1119 meters (Sakana), with a big peak visible to the east.
There were very steep climbs at times, but beech roots made good steps. Had a brew at d'Itchtauz (950 metres), under a beech whose trunk made a windbreak for the stove.
The next beech woods had a path deep in leaf litter, and in the shade the rocks beneath were covered with moss. Here, shelters had been made by building walls up against the overhangs of huge rocks. These too, were moss covered. As well as herds of sheep, we came across a couple of herds of goats today. The descent to les Aldudes was long and hot. The temperature peaked at 35°C as we descended, first on a dirt track, then on tarmac.
This village has a small hotel, opposite an attractive church, and on arrival at 2 pm, it provided three cokes and a beer to start, then two further cokes!
The plan was to stay a while, until it became cooler, then walk for another couple of hours, to reduce tomorrow's over 10 hour day. The village fountain made an excellent washing facility, for our clothes, and us. The wall above the river seemed like a good drying area, except that Martin's t-shirt took off and landed below. Attempts to rescue it using the longer of the two tent poles failed, and he had to wade over (thigh deep) to get it. A different but nevertheless, still effective wall was used after that.
In the meantime, the shop at the garage provided an excellent 'lunch' (it was 3.45 pm) of French loaf, pâté de campagne and tomatoes, which was eaten whilst the washing dried.

This was the first time we met any HRP walkers. Three lads were walking the opposite way to us, and stopped to snack, fill water bottles and bandage feet. They only have about 5 days to go! At 4.30 pm, we set off, carrying 4 litres of water to use at our camp. It was still 31°C and we were ascending again!

In open country, we sweated out a good deal of the water we'd drunk in les Aldudes before deciding to camp just above Col de Mizpira. From here, we can see yesterday's superb ridge in the distance. The hills are hazy but the sky is still cloudless. All that can be heard is sheep, horses neighing, and the tinkle of bells. During our alfresco dinner of savoury rice and tuna, Martin spots the craggy tops of a much higher peak in the far distance - is this near Lescun, our first rest day?


Dinner is completed as the sun sinks, with banana angel delight and hot chocolate following paella rice and a tin of tuna - nicer than it sounds. It is still warm enough to be in shorts and t-shirt. 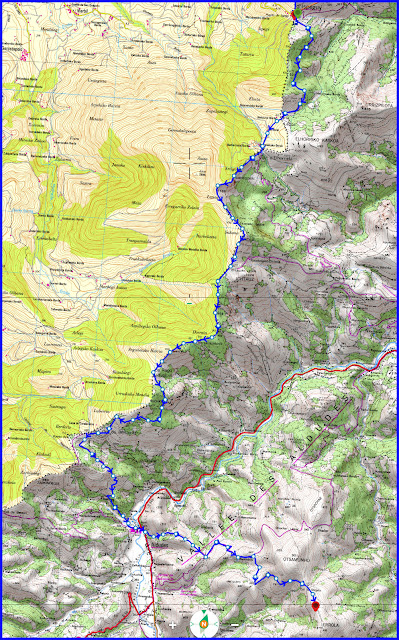 Back to Start
Next Posting
Previous Posting
Index﻿﻿﻿
Posted by Phreerunner at 22:50

Not being able to get into the tent before the sun goes down - that brings back memories. Your posts are having a similar effect that my recent re-meetings with Pennine Way sections have had - one gets the urge to go and do it all over again.

I had the same problem on GR11 in 2015, if you remember, Conrad. I just had to keep going to avoid being fried alive, and finished a week ahead of schedule. Exhausted!