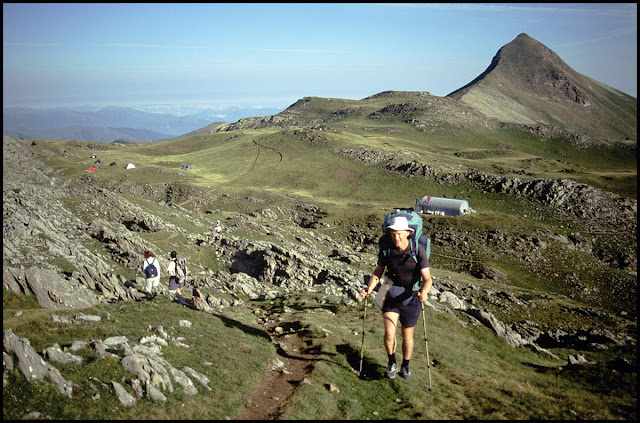 Wonderful mountain day and idyllic campsite.  All sorts of terrain – 10 hours, 23 km, 1400m ascent
A hard but beautiful mountain day – all sorts of terrain, from limestone plateau to woods to contouring paths over grassy hills.  Lunch in a hanging valley in the sun.  Sting in the tail was a 900m ascent, starting around 3.30 and ending at 6.15 pm, at an idyllic spot by the small lake, alone except for the eagles.
Diary Entry (by Sue)
A fabulous mountain day, with good weather returning, and culminating in a magnificent camping spot next to a small tarn, with spires of limestone mountains encircling us.

In the refuge this morning, the group of French families were up and away around 6 ish, the floorboards creaking with their footsteps. We were up at 7.15 and away at 8.15 after Jean's tea, toast and jam.

It was clear and sunny, with cloud still in the French valleys below. It was a little while before the skiing paraphernalia was left behind, but then we indulged in the rugged limestone landscape, dotted with small pines. The flowers either side of the path were a delight - lots of blue columbines included. 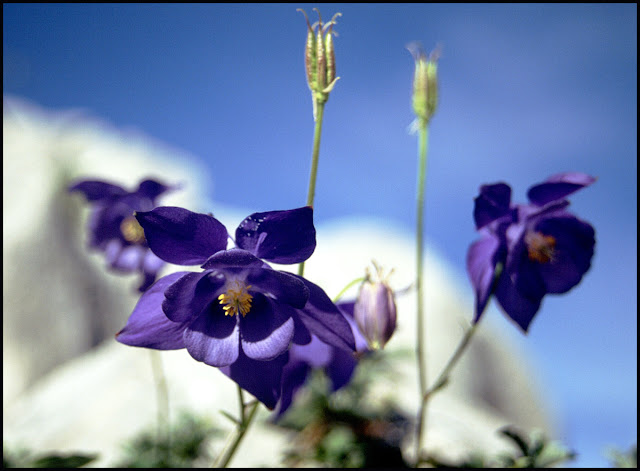 Passed the shepherd's hut at Pescamou, and a cavers' hut with about six tents nearby, higher up. (See picture above.)
Boots were necessary due to the sharp limestone underfoot. The first landmark was the des Anies, where a brew was had beneath views of the Pic d'Anie (2504 metres) and Pic d'Arlas.
There were lots of day walkers around, most heading for Pic d'Anie. On the long descent from the col, we assisted a lost Spaniard and picked up water from a spring. 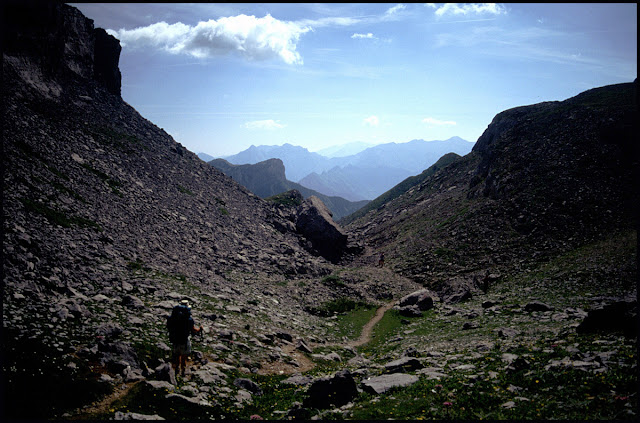 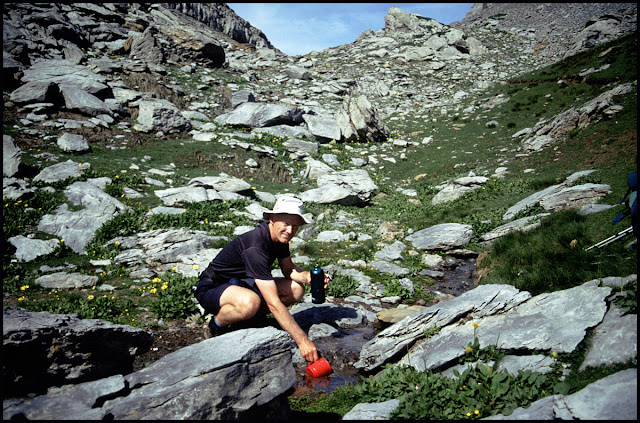 The hazy views ahead were of jagged peaks, and later, wooded valleys. Just after the col, the first patch of old snow was spotted. Rather than descending to meet the GR10 and walk down the valley, our route contoured around the hillside, on a little used path, beside which grew tall irises.
This route also lost many of the walkers seen earlier. Today's lunch spot was a highlight - another brew, and bread with tomato and soft cheese with herbs and garlic, in a superb spot in a high valley, with very few people around and towering limestone above. 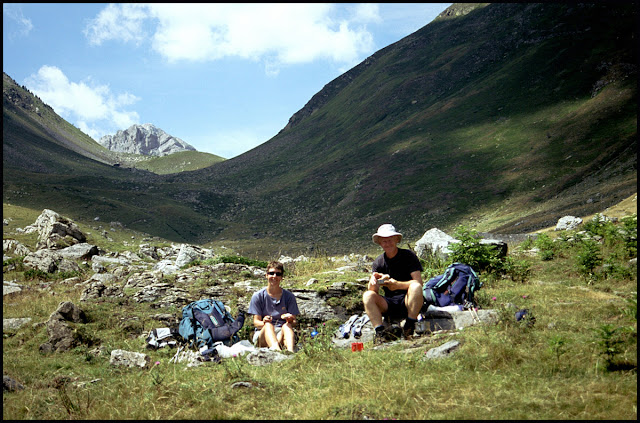 The temperature was ideal today - mid twenties and a breeze, with some small clouds. From the high valley, the path descended through trees, and as it steepened to sharp zigzags, a waterfall could be heard cascading to our right. The broad, grassy area, in which the waterfall finished and became a meandering stream, was dotted with families, picnicking or enjoying the water. 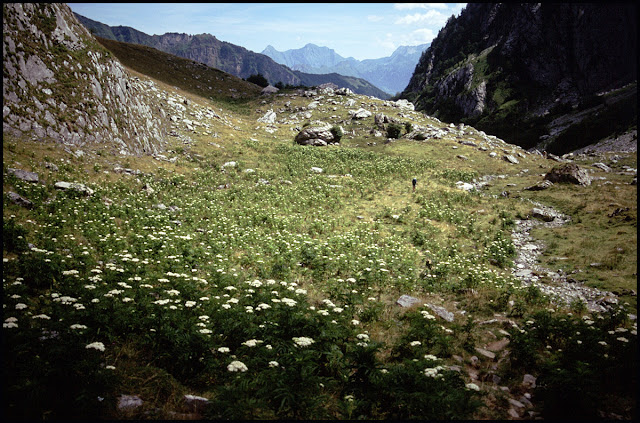 A track from here to a road dropped us down to today's low point (950 metres). Being in trainers again ate the miles up. Occasional stops for water and to ease the shoulders - today our rucksacks have been replenished with food for three breakfasts, three lunches and a couple of evening meals.
From around 3.30 pm, a long ascent, first up a wide track, then a narrower one through trees. 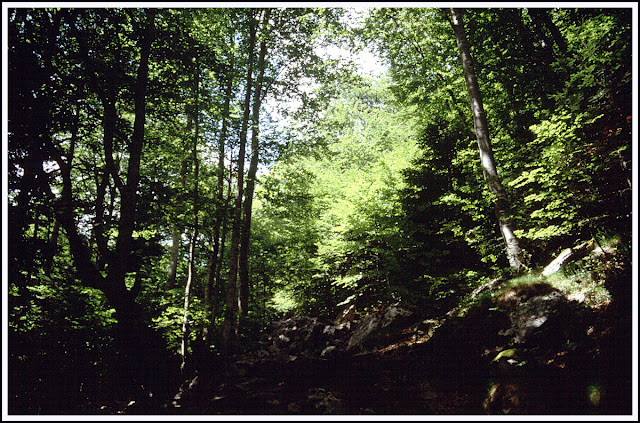 Again, the shade was welcome. Luckily, the gradient was mostly quite gentle. Due to the time of day, most people (apart from an English family with two youngish children) were coming down.
Earlier, calculations suggested we might not reach today's intended destination until 7.30, but our arrival at some shepherds' huts was an hour earlier than expected. A little higher, 4½ litres of water were collected from a spring, then carried nearly 300 metres higher.
The climb was sweaty, but our tiredness was worthwhile - there is a small tarn here, and whilst cooling my feet off, tadpoles nibbled at them - very ticklish! A nice pitch, still, warm conditions, and arriving at 6.10 pm, time to enjoy it. 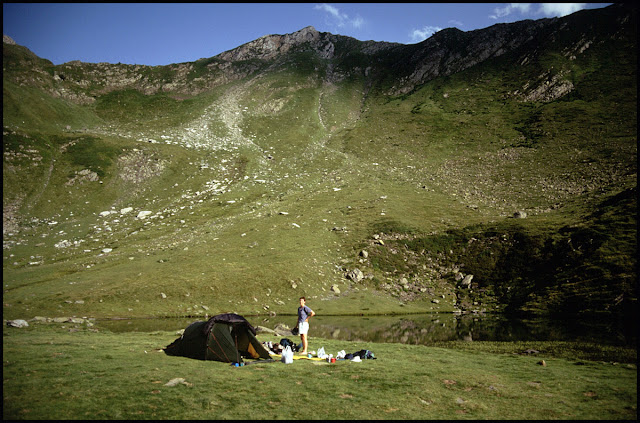 The occasional cry from a marmot earlier. Slightly lower, we noticed several vultures landing at a spot near the river, but the reason wasn't clear.
Mint tea preceded dinner of soup and frankfurters, than couscous in mushroom sauce and more frankfurters, then hot chocolate. The sun was on our site until about 8.30 pm, when it dropped below the mountains.
Camp at 1859 metres - at Lac d'Ansabère - lovely evening reflections in the lake. Eagles nesting above, sheep and campers below. 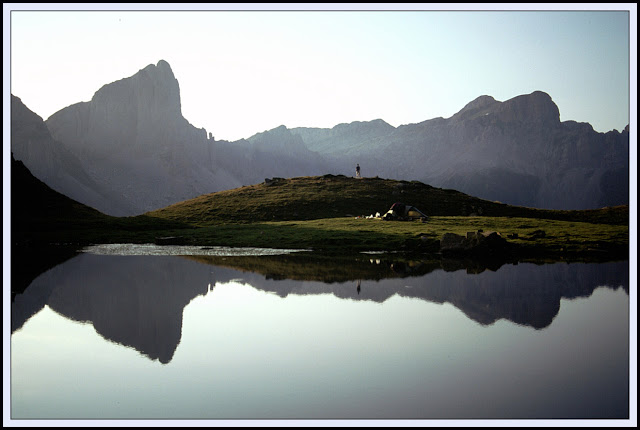 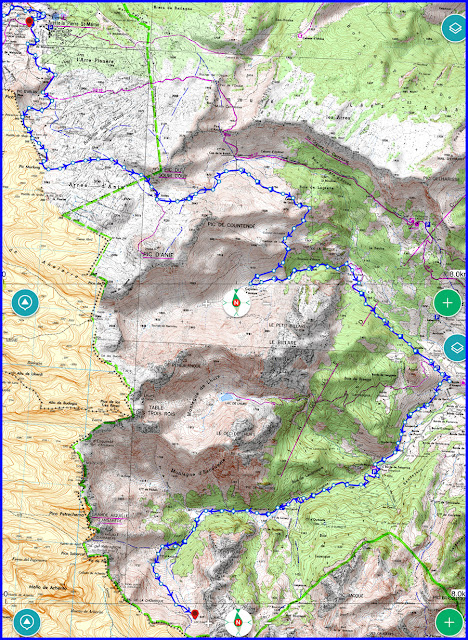 Back to Start
Next Posting
Previous Posting
Index
PS My friend Uli has now completed his East to West HRP crossing. He has taken some lovely pictures that can be viewed here. Enjoy!
Posted by Phreerunner at 14:55

Pic d'Anie - a memorable place as it was in front of that hill, just after a stop for coffee at Refuge Jeandel, that I suffered the incident of the runaway tomato.

Refuge Jeandel was memorable for us in 2013, when Jean insisted that everyone continuing along GR10 form an international group and walk together. The majority did the next section by taxi...
seven of us did take Jean's advice and form a group, and I can still picture everyone's amazement when Francoise produced a brand new pair of crampons, and the gasps when Gilles nearly disappeared down a snow hole!