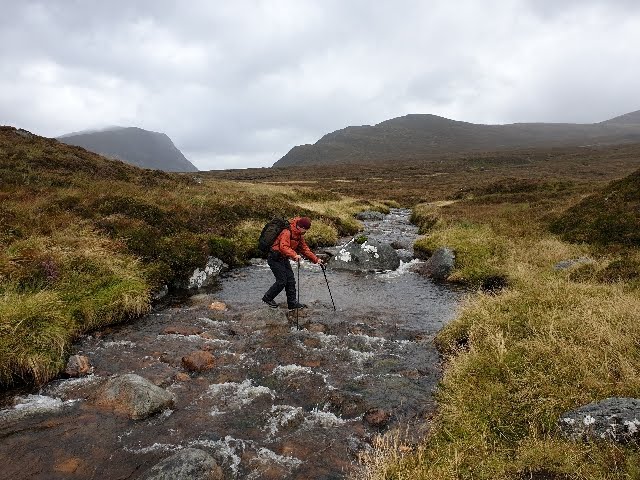 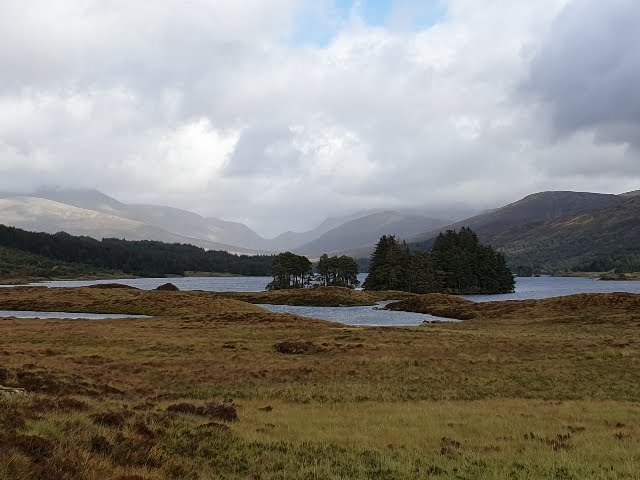 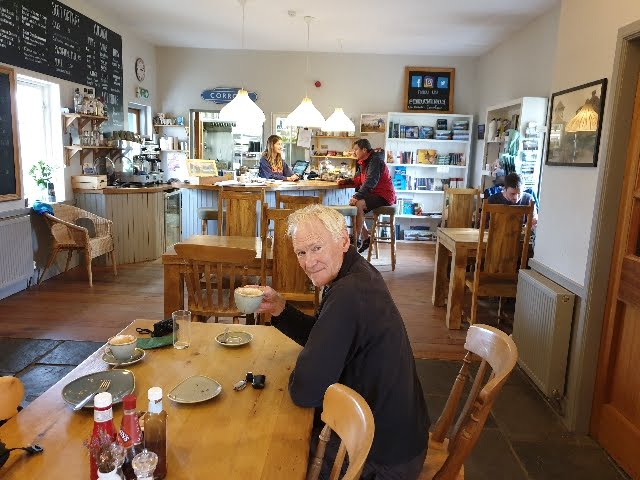 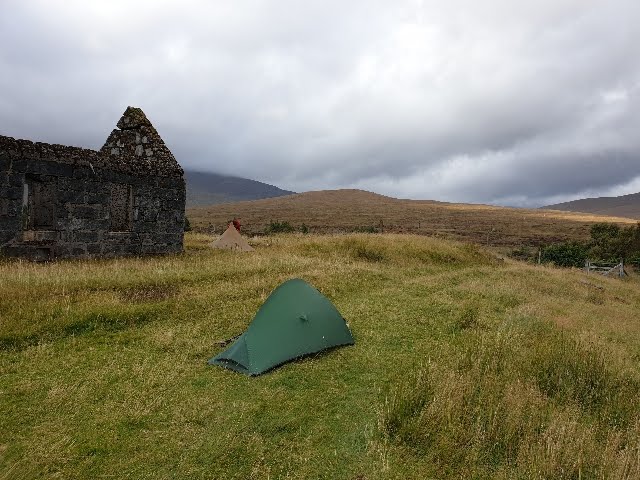 To this spot via Corrour Station - 25 km, taking us 8 hours.

Overnight heavy rain had subsided by the time we left our excellent camping spot at 8.45. It was to be a day of light showers, with waterproofs on and off, principally the former.

After a good track for about 2 km, we continued along a muddy stalkers' path before heading over the pathless bealach leading to Strath Ossian. There were a couple of river crossings. I was glad of my Saucony barefoot running shoes for the first, which Markus managed to cross in his boots, by some miracle not getting his feet wet. Or so he claimed.

The second crossing, after we had tired ourselves out negotiating a network of peat haggs whilst battling a strong head wind, was easier. Unusually I was ahead, and I took the top picture of Markus. I didn't expect him to slip in after that, so there's no photo of him succumbing to a wet foot!

On reaching Strath Ossian, we climbed a deer fence, only then to realise we were trapped in an enclosure. So we climbed back out and made our way to a rough track that signalled the end of today's arduous going. But the first 7 km had taken nearly three hours.

When it wasn't raining the light was wonderful, and we enjoyed the scenery all the way along the gravel track to Corrour Station. On the way, we paused for lunch near Corrour Shooting Lodge, and admired the plethora of different mushrooms and toadstools in the neighbouring woods.

We admired the mushrooms yesterday as well, and wished the expertise of Heather T-S was with us. There are also lots of little frogs in the heather, and we've seen dragonflies and lots of birds. I can identify the chaffinches, the stonechats, the redstarts, the meadow pipits and the buzzards, but most of the others are too quick for me.

Grasses and lichens abound. Enthusiasts could be overwhelmed.

A big surprise - no midges!

As we approached Corrour Station there were good views back to Loch Ossian (second picture). Markus's plan was to visit the restaurant at the station and then head over Leum Uilleim to get to this camping spot by a ruin. We paid lip service to that idea by enjoying coffee and cake at the restaurant. Then we headed back the way we had come and turned right near the hostel, along a good path towards Rannoch.

Approaching Lubnaclach we met an off road vehicle laden with dead deer. Then we set up camp in a strong wind. Markus struggled with his flimsy tarptent and had to move it. I realised I had camped in the buggy's wheel tracks. I hope we've left by the time any deer stalkers come past tomorrow!

We had pitched our tents by about 5 pm, so we are both enjoying a long evening in our respective shelters at what will probably be the last wild camp for both of us for many months.

Corrour -happy memories from my LEJOG:

The b and b at The Corrour halt on the West Highland Line is
excellent. This is a station in the middle of Rannoch Moor with no
road access and a truly wild spot. The b and b is run by Beth
Campbell who is an ex nurse. Proper draught beer is served and
very good home cooking provided. I had prawns in breadcrumbs
and ginger and then venison bolognaise. I was able to have a good
bath here as well. The welcome was warm and an indefinable
pleasant atmosphere prevailed.

I don't know whether the staff are the same, but Corrour maintains the ambience you experienced in 2008, Conrad. Markus found a chap he had met before - David - a guy who has been living nearby in a tent for the last 12 years following his retirement from the army. Very knowledgeable and helpful to anyone passing by. He confirmed that our planned camping spot was a good one.