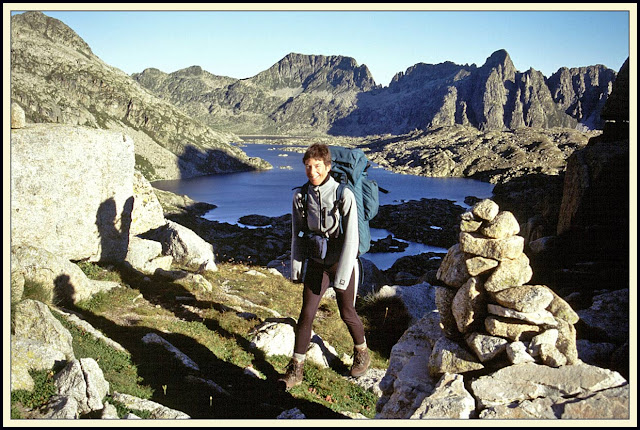 
We see no-one until having climbed to and descended from our first col, to a lovely blue lake, Estany de Mar.  An undulating path alongside it, then a descent through pines to a refuge, Refugi de la Restanca, that looks austere but quickly serves lovely hot chocolate!  This sees us up to the next col, where we lunch in the .  There are small lakes everywhere.  From the highest col of the day, very clear views of the area we’ve walked through in the last few days.  Descend to another refuge which provides cokes to take us off route to a lake to spend the night.  Yoga in the sun whilst waiting for a party of kids to leave! 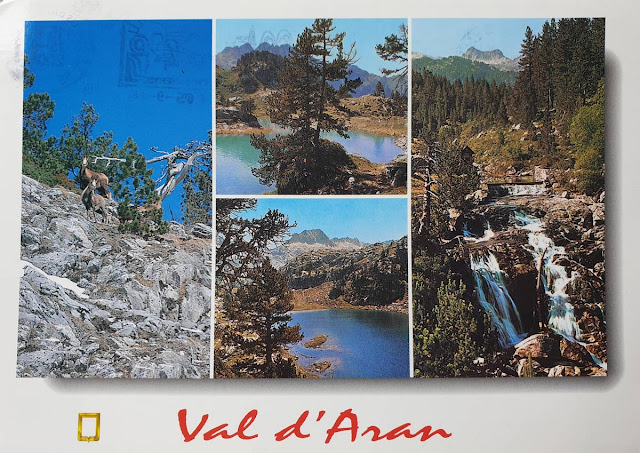 
On dry days, the morning routine is as follows:
My alarm - 6.50 am - ignored as we enjoy the warmth of sleeping bags.
Martin's alarm - 7 am.
We dress in our bags, and the inner door is opened to put water on for tea.
We start some muesli and water in bed whilst the water boils.
Tea is made, and cools whilst sleeping bags and liners are packed.
Martin usually gets out of the tent about now' and I pass his things out, followed by mine. Karrimats are last out and first into the rucksacks.
We pack, clean teeth, and this morning were ready by 8.15 am.

My toilet spot was an excellent one this morning - I could sit instead of squatting. We burn toilet roll, also effective today with a slight breeze. We had seen no one since pitching camp yesterday, and were to meet the first people nearly an hour into the walk.

Under a cloudless sky we climbed to the Collado d'Estany de Mar at 2468 metres on a bouldery path. (Pictured above)

From the col, a lovely view of Estany de Mar. 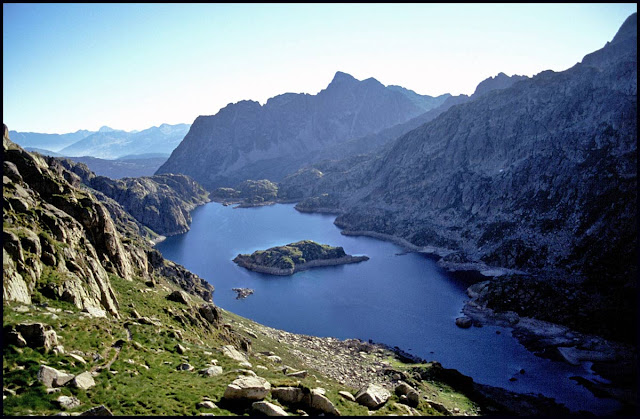 'Estany' is Catalan for mountain lake, and this one was deep blue. A steep descent to a sandy beach and a stop to change film, don t-shirts and look up a flower. 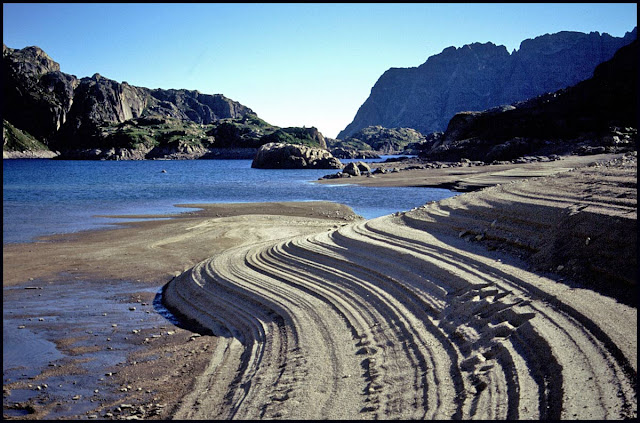 The walk along the lake was very peaceful, although the path undulated. At the end of the lake, a view of the Refugi de la Restanca on the shore of the Estany de la Restanca, with pines and a rushing river. The descent was steep and the pines smelled lovely. 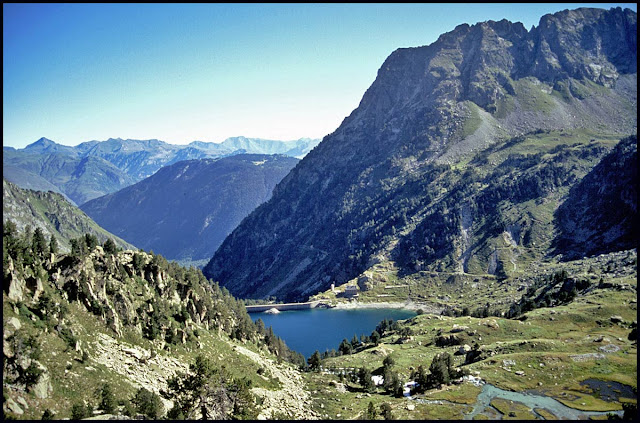 Despite looking austere, the refuge was welcoming and hot chocolates on the first floor were made instantly.

Another climb followed, to the lovely Estany deth 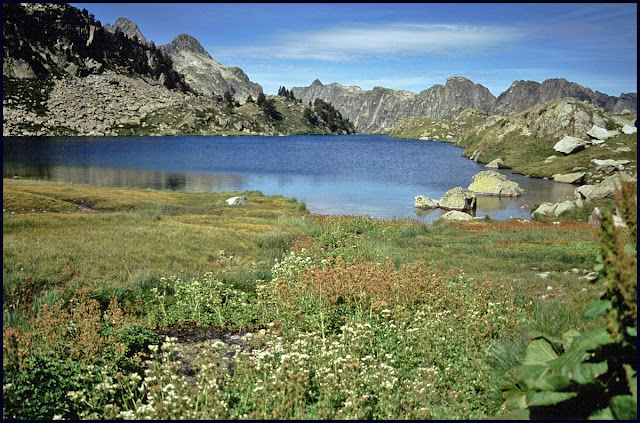 This was another blue lake with a scenic backdrop, then a further climb to the Coll de Crestada.
In usual weekend form, plenty of people are out for the day, most moving quickly. This col marks the entry to the Parc National de Aigűestortes i Estany de Sant Maurici, a national park we leave again just an hour later! Lunch on a grassy slope just after the col.
With bread gone we're on to Tex-Mex tuna, a brew, and a bit of chocolate and mountain mix. Views of the Estany des Monges. Today, high cloud is visible and we don't want to linger too long over lunch as the wind is cool. Next, another climb to a small col, then down briefly to the two Mangades lakes, again clear and blue.
Then the highest col of the day (2560 metres) Port de Caldes, from where we can see the area we've walked from in the last few days. 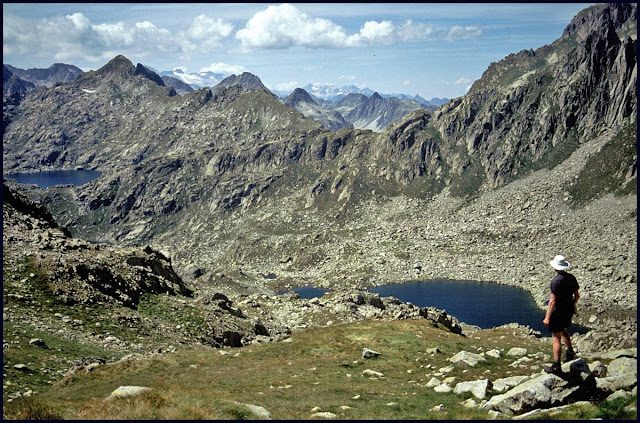 A delightful descent on a nice path, near burbling streams, to the Refugi de Colomers, where two cokes see us revived for a short climb to the lakes we camp by.
Today is a well-deserved 'short' day, and we settle by the lake at 4.25 pm, in the sun. Whilst Martin fetches water, I enjoy a long yoga session. Soup is made before the tent is pitched (in bivouacing is allowed outside the national parks but should be between 8 pm and 8 am). 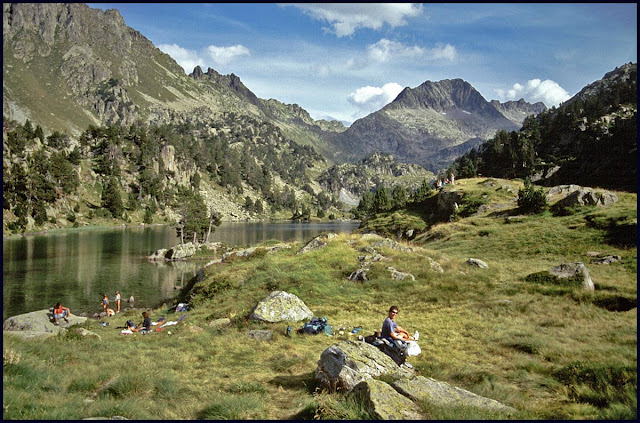 The group enjoying themselves by the lake leave us in peace to cook pasta. Then we escape the mosquitoes by going inside the tent, where mint tea and hot chocolate is on the menu (7.45 pm). We then had the luxury of reading for an hour until the light faded around 9 pm.
Stats and route (Viewranger):
12 km, 1000 metres ascent, 8.2 hours 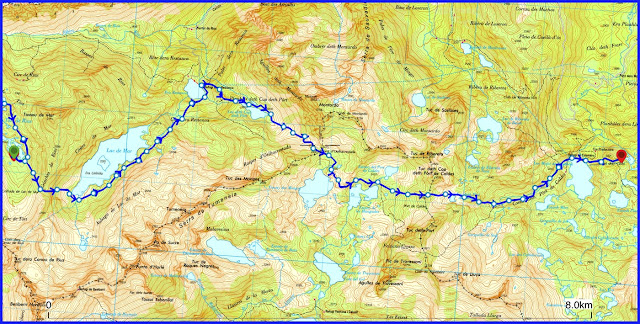 We stayed in Restanca Refgio and I rember eating fresh fish from the lake. Idyllic situation.