Friday 4 September 2020 - Another Walk Around Timperley and Stretford 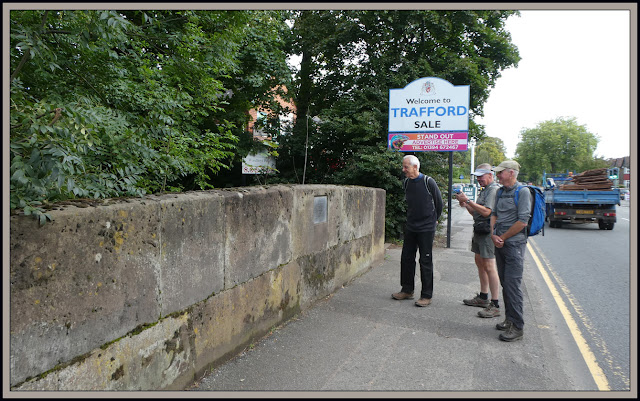 Click on any picture for better resolution and access to a slideshow.
Sue and I went on this walk on 10 June, when Lockdown was first being eased and we felt we could venture onto the towpath again after three months of feeling uncomfortable there due to the close proximity of cyclists and others. I reported on that walk here.
With the possibility of no transport today, I planned our now regular Friday walk to be on the same route. In the event, Sue didn't need the car as she was working from home, and I was joined by three stalwarts - Graeme, Paul and JJ, for the walk from our house, after a brief serving of coffee.
The route is virtually entirely off road, apart from the first few hundred metres to the busy (ish) A56 road. Once across the road, we paused at Siddall's Bridge over Baguley Brook. A modern plaque indicates that the bridge dates from 1765, at a time when the Manchester to Runcorn extension of the Bridgewater Canal was under construction nearby. 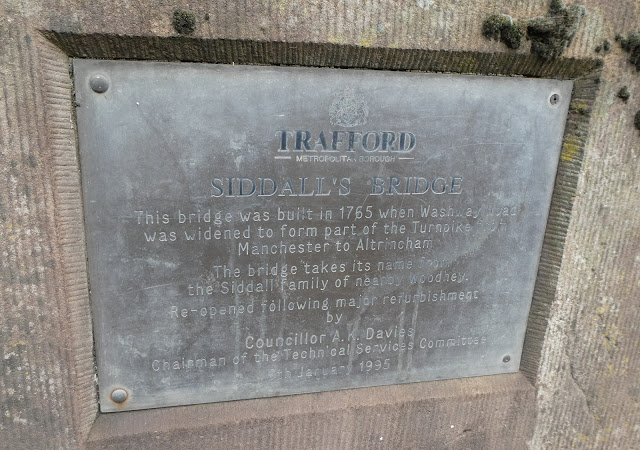 A narrow path through Woodheys Clough follows Baguley Brook to beyond where it merges with Timperley Brook and becomes Sinderland Brook and heads off to drain into the Manchester Ship Canal. Thus far, we walked the first couple of kilometres of a 5 km (not)parkrun that Sue and I are in the habit of jogging. 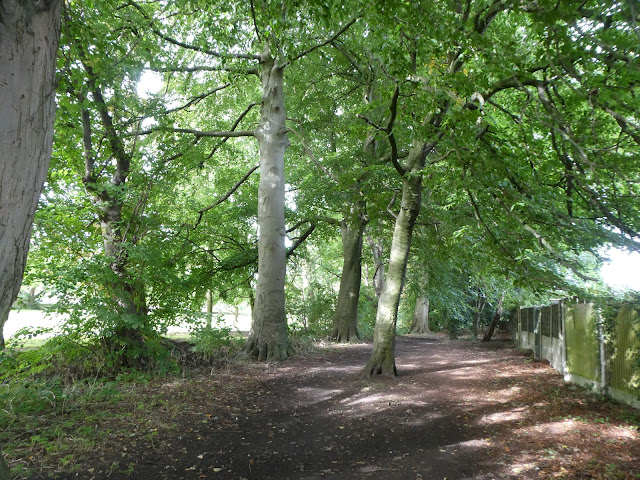 The path leads past now tired brambles to our local recycling depot that sometimes appears on a TV show called 'Money for Nothing', where the presenters accost people leaving their rubbish and take said rubbish away for conversion into valuable 'goods'. Today we chatted with the 'doorman' and I left him some electrical discards to recycle (including the duff Fitbit Ionic recently reported upon).
Our route joined the Trans Pennine Trail (TPT) here, and we continued on through an area of horses, stables and riding schools. Horses are often encountered on this section of the TPT. 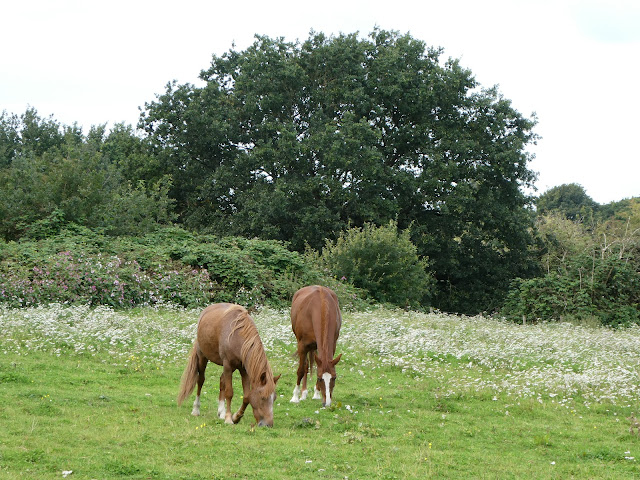 The TPT follows an old road between the high fences of a sewage works. JJ recalled being driven down this road in his youth. Barriers now prevent that, and at this time of year the sickly smelling Himalayan Balsam is rampant in the verges. 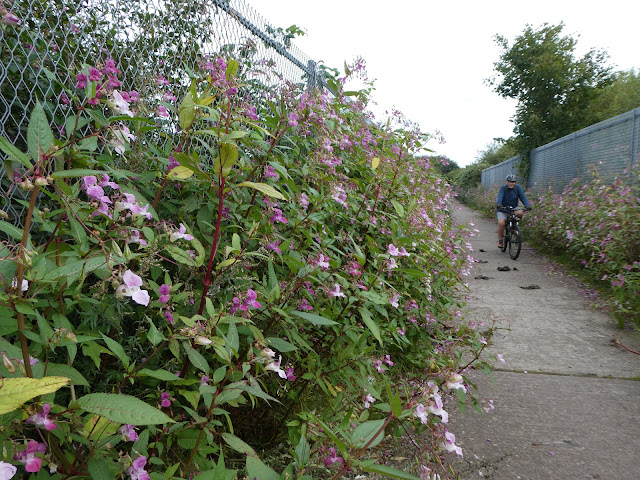 We left the TPT for a while and passed through an area abundant in Goldenrod. 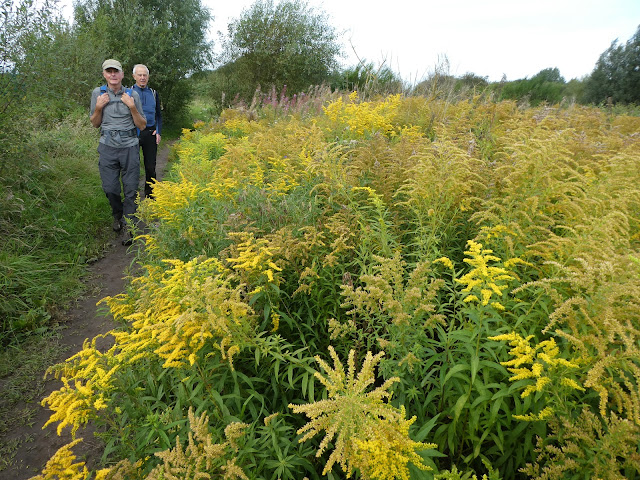 The 'experimental' path that none of us had been on before passed some solar panels which apparently comprise Altrincham Solar Farm.

The paths around here are what may be described a 'verdant', or simply 'overgrown'. You wouldn't think that we are on the edge of a large housing estate in West Sale. 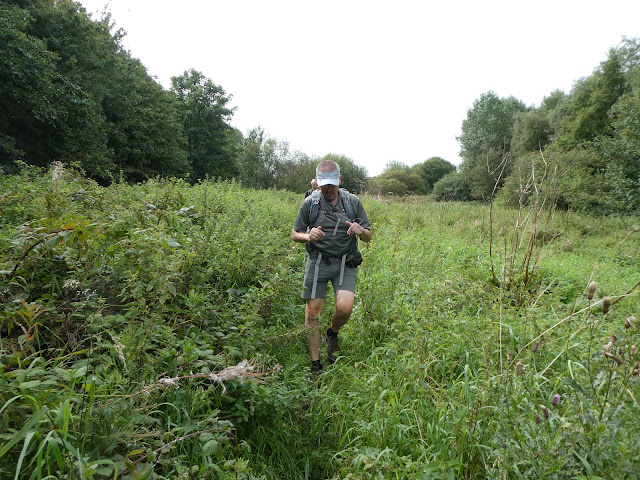 After a while we re-joined the much wider path of the TPT, from where, near Ash Farm, there's a view across fields of crops towards Carrington Moss. I think the area below is next in line for a vast new housing estate. 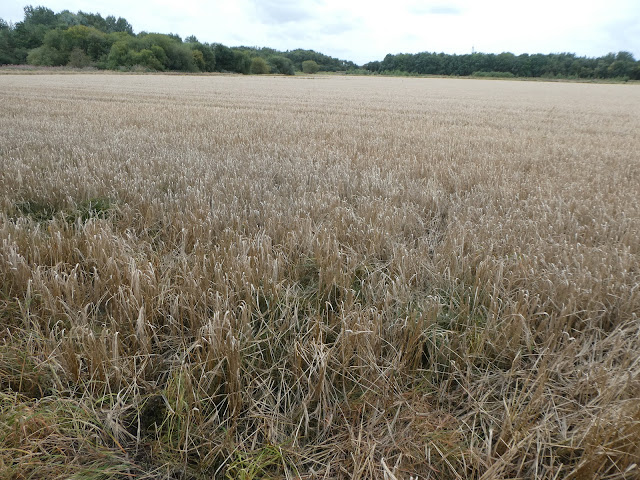 We encountered, amongst others, a chap on an electric bicycle a couple of times, always with a map in front of him. He claimed never to have got lost, but was happy to receive advice. He was on grandparenting duty in Timperley, having travelled over from his Lincolnshire home which turned out to be just a couple of miles from my parents' old house in Sudbrooke. We assured him that his cycling route, which was the same as our walking route, would get him back to Timperley in plenty of time to collect his grandchildren from school.
We crossed the Mersey via the bridge shown for its Canoe Portage Point in a photo from our previous visit. The re-entry point is just discernible on the left bank in the next picture. 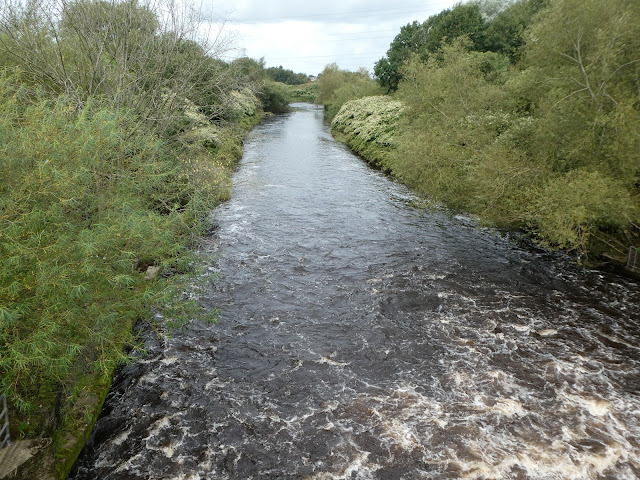 After a short walk alongside the Mersey in the direction of Stockport (yes Graeme, it's a good walk to Stockport from here!) we passed what I'd previously photographed as a rather barren area adorned with a sign saying 'Coming Soon: Riverbank Coffee, Refreshments and Snacks'. That all looked rather optimistic in June, but they have made it happen, and they had plenty of customers. Well done!

Our next obstacle, after our own break for coffee/tea and cake (thanks JJ), was the attractive footbridge across all ten lanes of the M60 motorway. 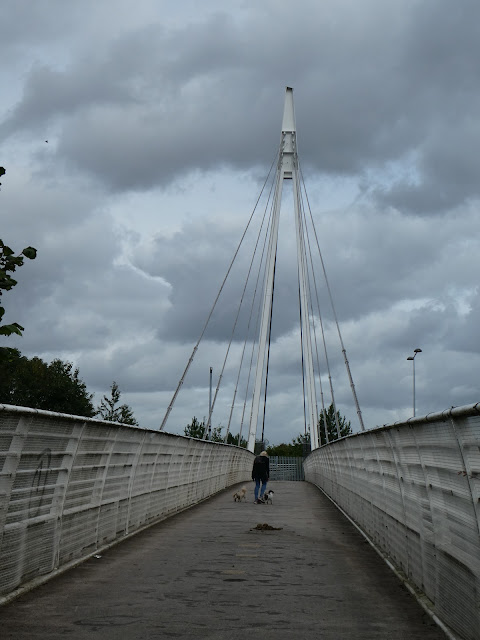 There was about twice the volume of traffic as shown during our visit in June, but the motorway was still remarkably quiet. 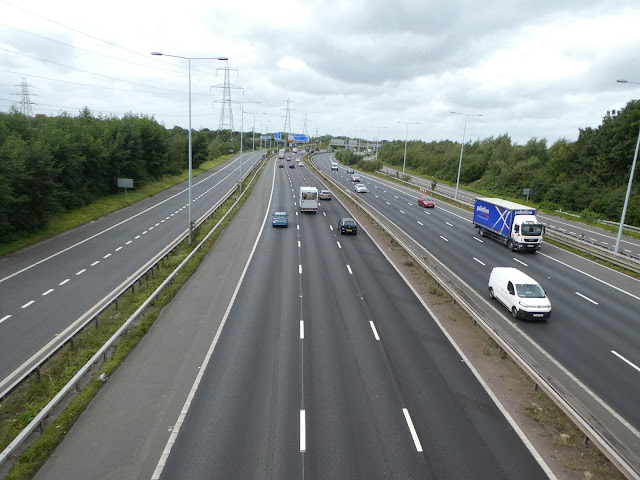 I'd never been onto Stretford Meadows before. We walked up there for a slightly better view of our surroundings. JJ knows the area and his statement that it comprised an old rubbish tip was confirmed by an obvious vent to release gases, probably one of many. 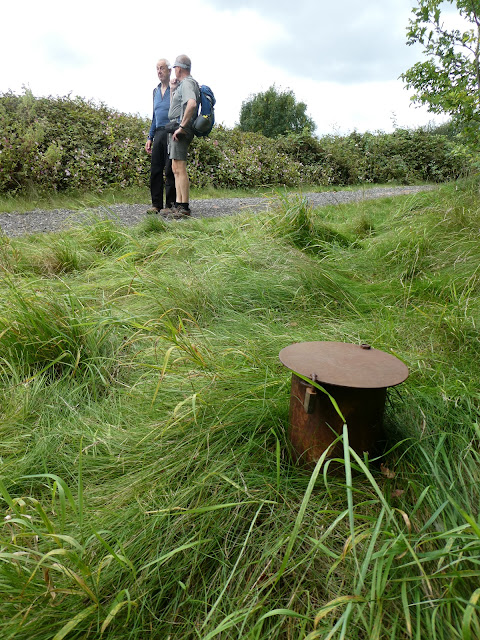 A pleasant path leads on to the Bridgewater Canal, before which an area of boggy meadow next to both the TPT and the canal is passed. 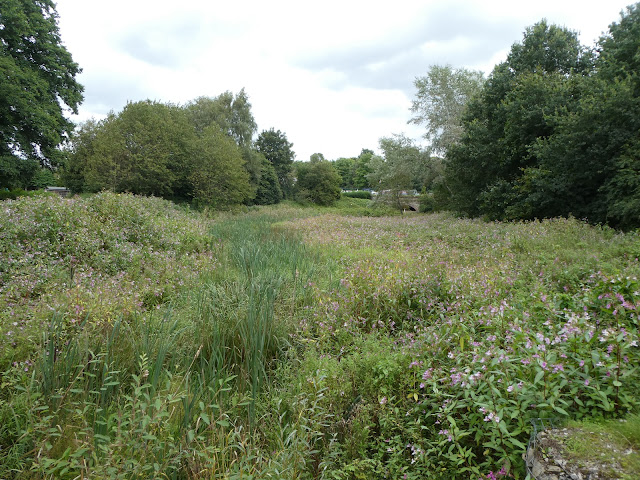 Joining the canal near the Watch House Cruising Club building, we turned right and headed to another bridge over the River Mersey, a spot where if you wait long enough you may be able to spot Kingfishers. Apparently when the canal was being built many folk had difficulty with the concept of a bridge carrying a canal over a river. They thought the water would all drain into the river. Some novel items, including woven fabric, were used to make aqueducts water-tight. 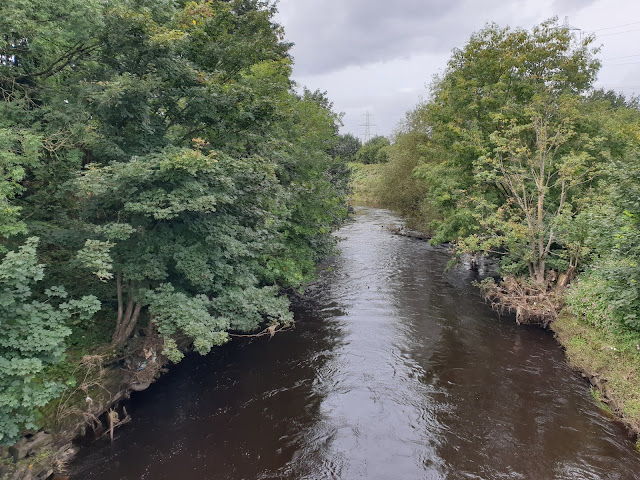 Here are my companions at this aqueduct. 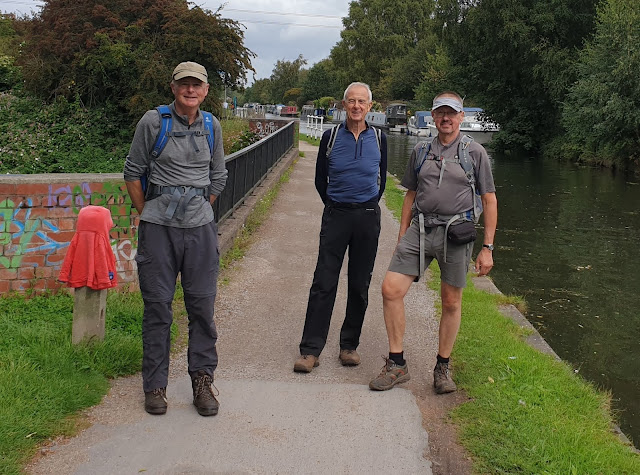 Soon afterwards, we passed under the multi-laned M60 motorway. You can see from the sunshine in the picture that there are two separate bridges, one for each carriageway. At this point the canal runs next to the Metrolink railway, which goes under the same massive bridge. 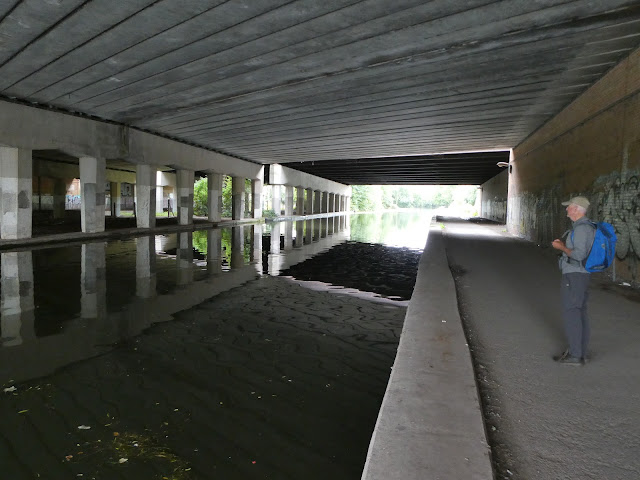 Some of the 'Cruisers' are beautifully decked with flowers. It's an active waterway and a busy towpath - a great amenity. 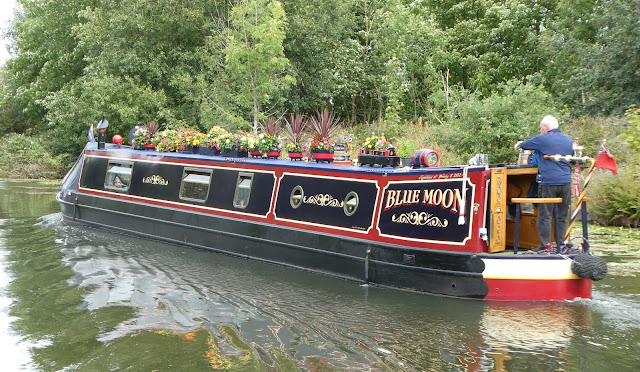 With Sue at home, as we neared the end of our walk I was able to place an order for bacon butties for lunch for the fourth Friday in succession, with tea and coffee thrown in. "Bon appetit" as they say. 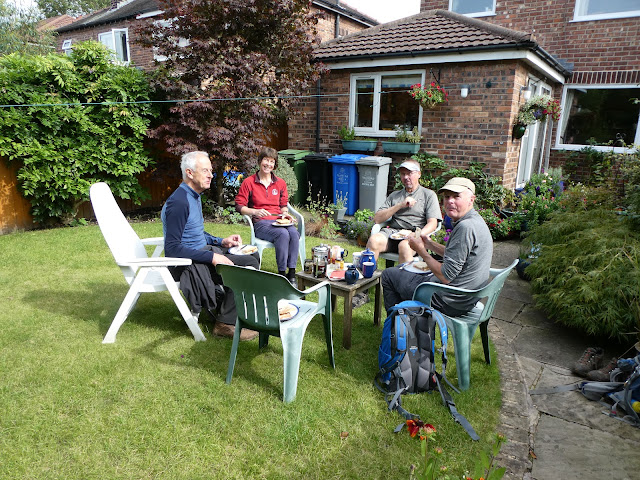 Here's our 16 km route, taking around four hours on this occasion. 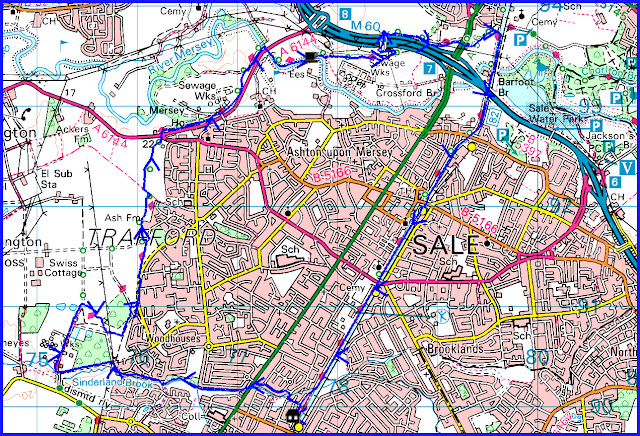 Next week, let me know if you plan on joining me, any update will be here:

Friday 11 September: A 20 km walk from Beacon Fell Country Park, going over Parlick and Fair Snape Fell. Meet at the information centre SD564427 at 10 am. Allow an hour and a half from South Manchester, it's on the edge of the Forest of Bowland. Bring some lunch.
Posted by Phreerunner at 21:44

It was a lovely walk in very good company, thanks for leading it Martin.....although it was Saturday afternoon before my nettle-stung legs calmed down!
Also thanks to Sue for the delicious bacon butties, it was a fine finish to the expedition.

'Twas a pleasure, JJ. Pleased to see you in good form, and thanks again for the 'cake'.

PS I thought you were very brave to stay restrained re the nettles, JJ, we were all whinging about them a few weeks ago around Delamere, when we were all in shorts and the stingers were rampant.