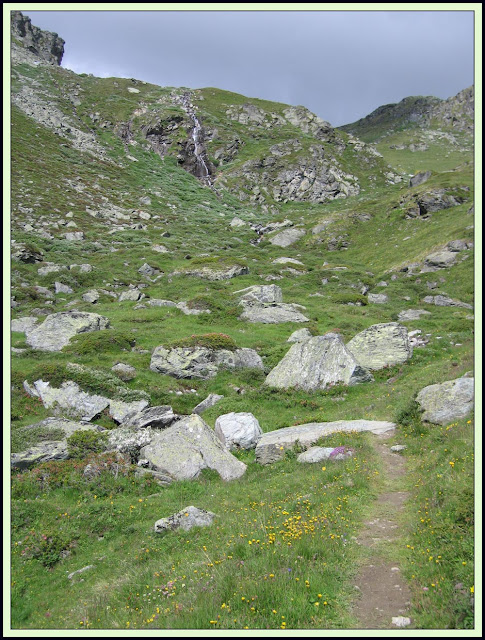 Gaynor and I shared a twin room and were woken by loud bells at 6 am. Slept on until the usual stomach cramps rushed me to the loo (only one more day and they were gone). It was sunny outside but quickly clouding over. I said my goodbyes to the others who were having a lazy day back to , went to the shop for provisions, missed the 8:15 cablecar (by a lot), and idled the time away until the next car at 9:15.

This got a diary entry (for last Tuesday) done, and got  me up from Grimentz at 1440 metres to Bendola at 2112 metres, from where I headed off on a well marked path (on the ground if not on my placemat map) signed to Roc d'Orzival - 2 hrs 10 mins. 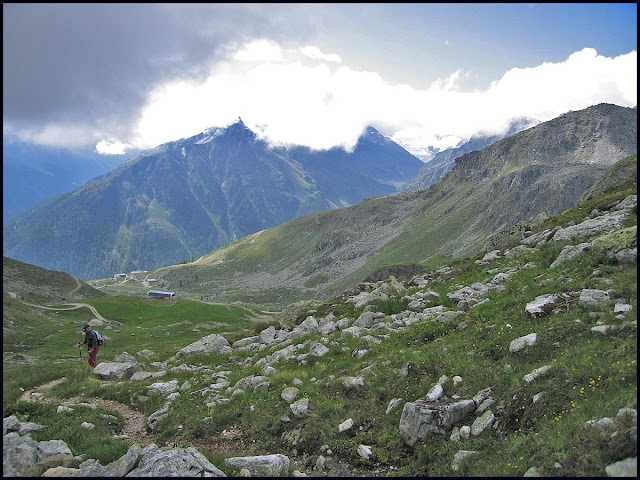 The path wound pleasantly up through ski pistes. I kept passing and re-passing an elderly Swiss gent on this pleasantly warm day. After an hour I reached a lovely spot by a lakelet at 2475 metres - ideal for a high camp. There was a snow patch at 2525 metres, and shorts and t-shirt were still in order despite swirling cloud. The place was lush with pansies and gentians, forget-me-nots, daisies (ox-eye), kidney vetches, asters, black vanilla orchids, bellflowers, etc. A yellow carpet of flowers with blue, purple, and other colours neatly woven in. 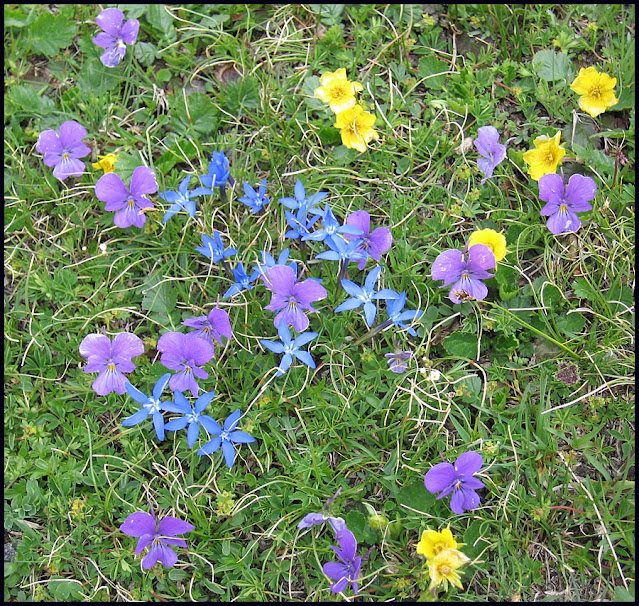 By 11:25, after less than two hours, I was at an orientation point at about 2800 metres below Roc d'Orzival. I spent time here with the Swiss man. There were pointers in all directions, from the nearby Breithorn and other 4000ers, to in the distance. 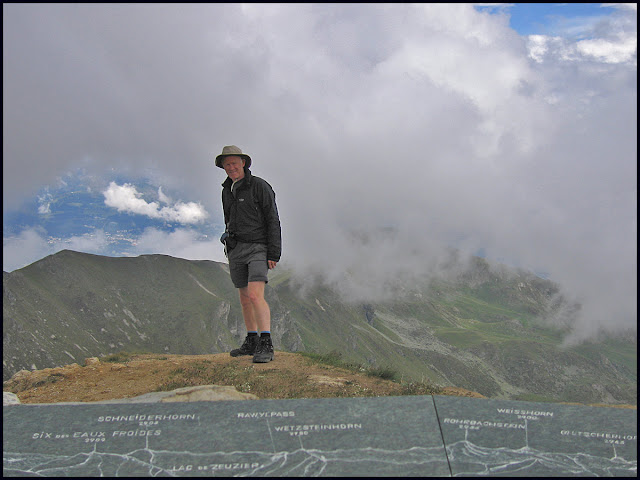 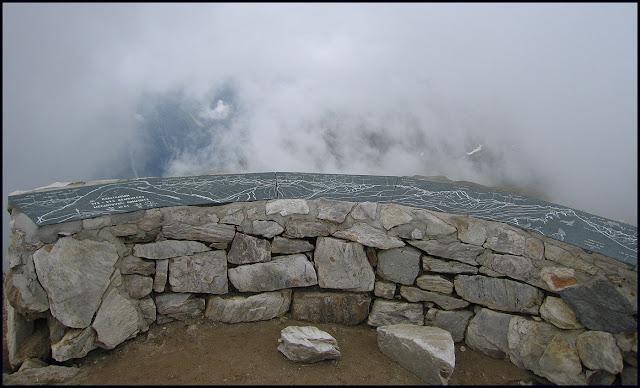 We watched a fellow 'hiker' unload his rucksack, neatly arrange the contents, don a windproof suit, and then jump off. I got a video clip of the start of his 2300 metre descent to the valley far below. 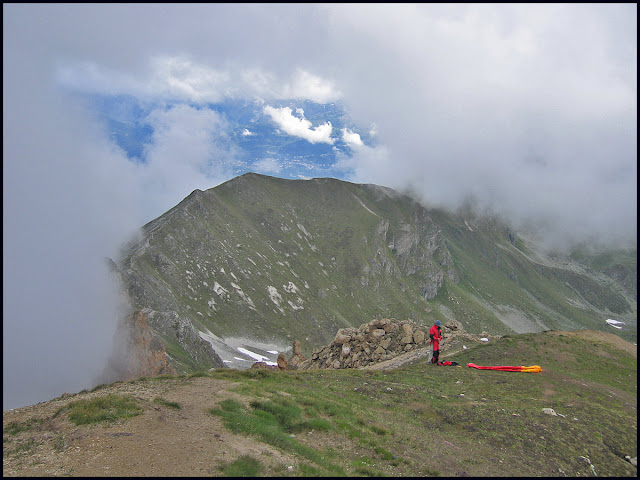 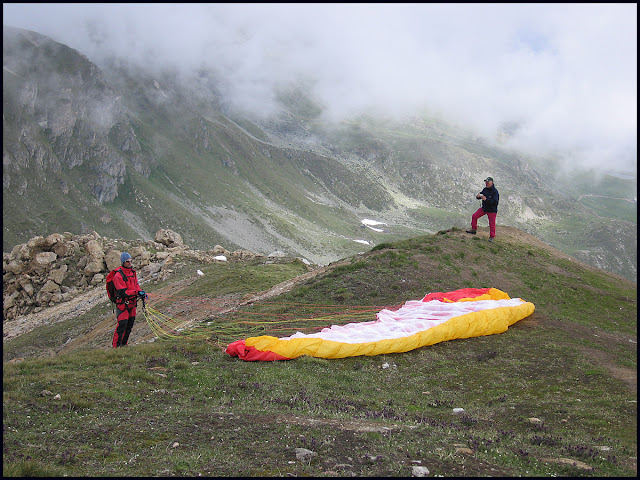 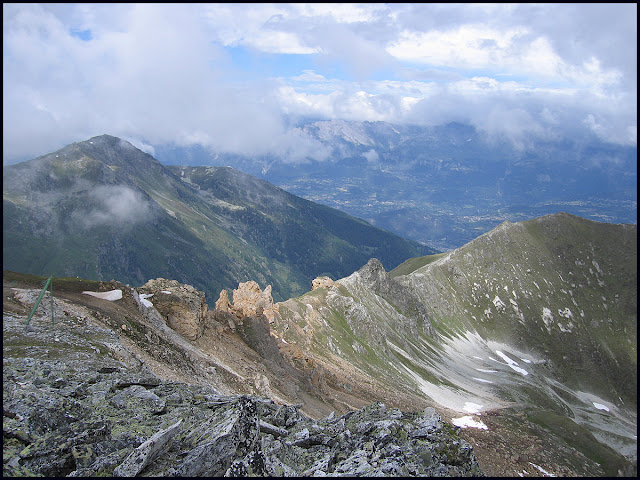 The Swiss man and I scrambled up to the Roc, or a nearby summit which I took to be the Roc - though that may have been a less accessible point further east. 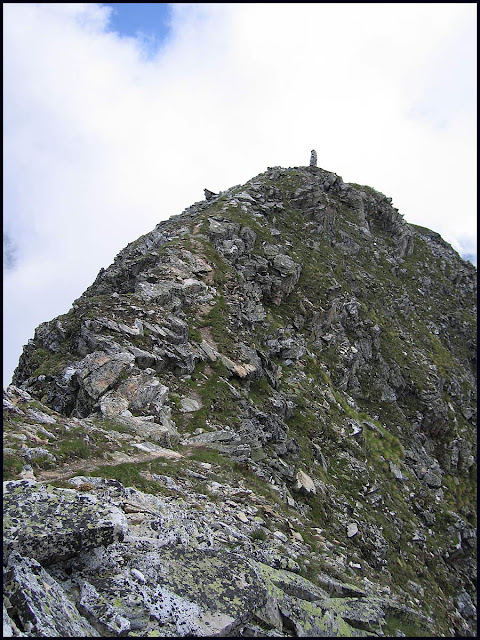 Then the route I had spotted at the Tourist Information place - it was signposted - 2 hrs 30 mins to Crete du Midi. I set off at 12:00 after texting Sue Emmett to brag about what they were missing. (Sue B also got texts every night, unfortunately details not retained.) 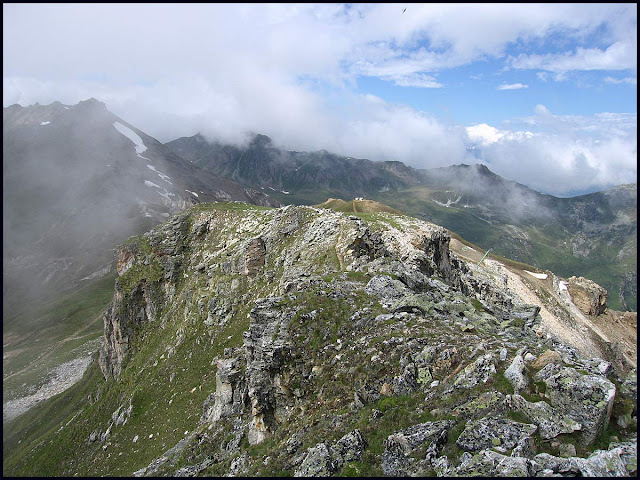 It was calm and warm, saxifrages were abundant, and the walk along the airy crest, past occasional pinnacles, was delightful. Sheep bells tinkled in the distance, otherwise I was completely alone. 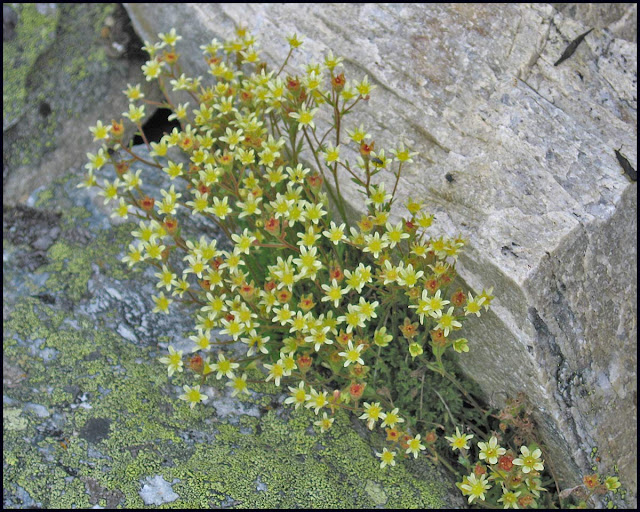 I halted from 1 pm to 1:25 pm on a broad plateau at 2575 metres in sun and swirling cloud, for my final mountain brew stop of this cameo trip. Snow finches fluttered on rocks nearby.

There was a peak with a post on it nearby ahead (see above), and clear views down to the valley, with helicopters buzzing in the distance. A warning triangle painted on a rock signaled trouble ahead?! It was an aided section, with new chains fastened to the rocks - not necessary in these benign conditions, but perhaps there have been accidents here. A few people were seen here, and this short aided section led past the peak with the post through an optional hole in a rock on the crest of the ridge, to a col at La Brinta - 2610 metres, with Crete du Midi signed as 45 minutes away. 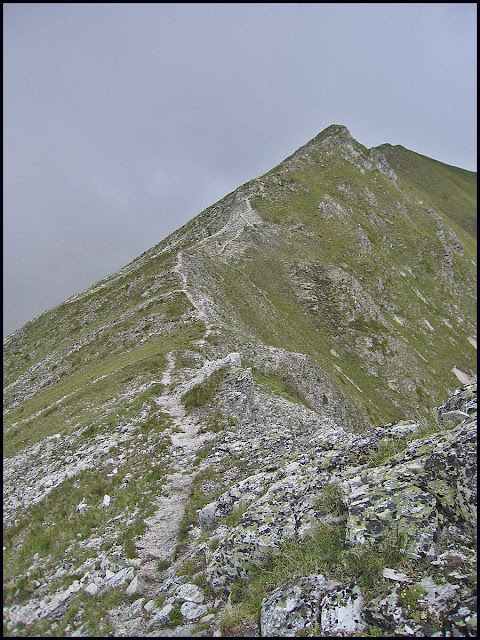 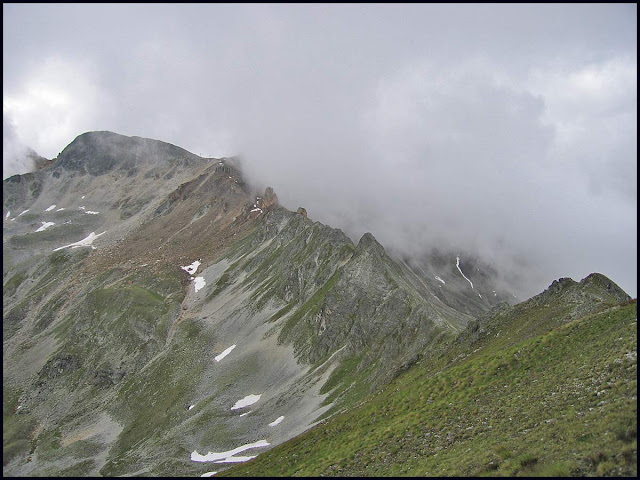 Looking back along the ridge 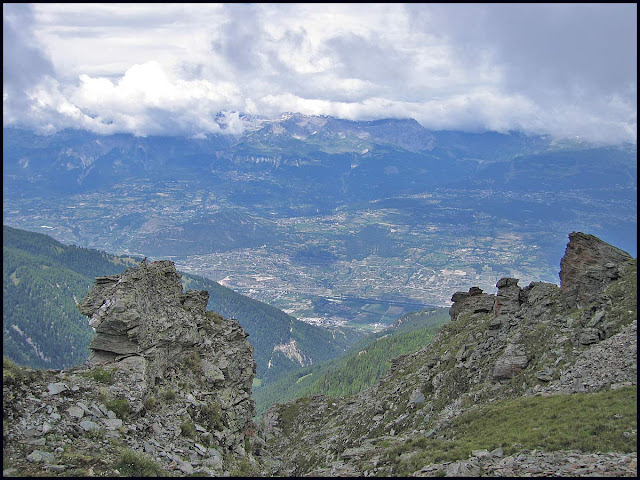 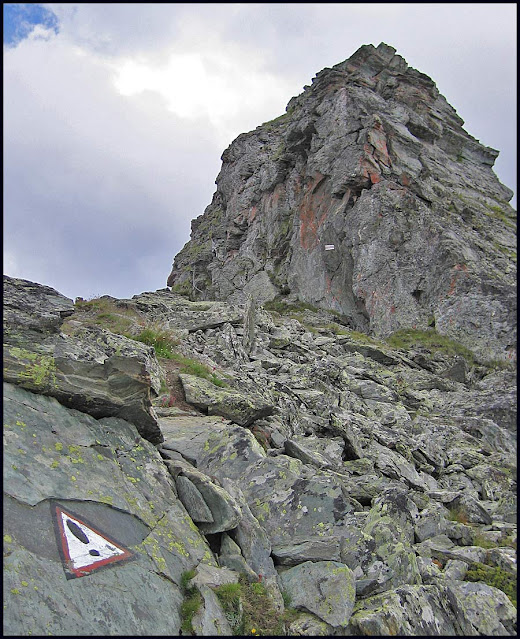 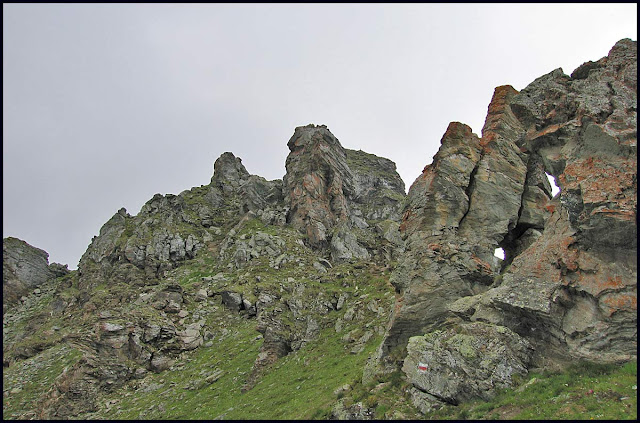 I continued a few metres before descending steeply NNW on a marked path towards the ugly scar of the cablecar station. There were people with downhill scooters - trotinettes - here, having ascended the cablecar to Crete du Midi at 2331 metres, they would be freewheeling down to the village of Vercorin at 1325 metres - helmets and brakes compulsory. We also saw these at - looks like great fun - Sue and I must try it next month. (We didn't - it remains a treat in store!)

On the way down my attempt at a photo of a Trumpet Gentian failed due to lack of camera battery power - the battery had just lasted long enough! (Perhaps that's why there are relatively few photos from this trip - I had no spare battery or charger for the S70, and it was before the days of camera phones, so I was conserving the battery.) 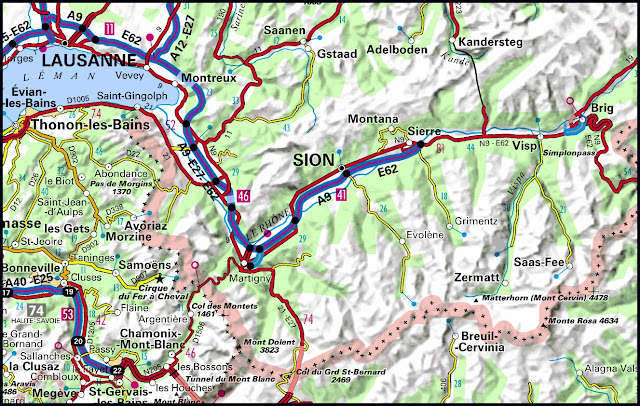 I reached the cablecar at 2:25 pm after the 6 km stroll, and got straight onto the continuous system of small cars. Reached Vercorin, 1325 metres, at 2:45 pm. Passed over a herd of bulls with loud bells. No charge for this trip, but SF5.80 for the next stage down to Chalais at 500 metres, during which I chatted to a gent who gave me a lift to Sierre station in his BMW, saving me up to an hour.

And so, I got a SF51 ticket to and hopped on the 15:26 train, only an hour after reaching Crete du Midi.

It was an enjoyable, scenic journey for two hours, then I managed to walk to the Stars Hotel (Motel) over the French border. I rested up here before strolling out for a meal at the Buffalo Grill nearby.

Next morning I strolled back to the airport. EasyJet Airbus purported to be late but ran on time, back to roasting hot for 11:30 and a pick up by Mike to return home in the heatwave.

[To be continued]
Stage 2
Index
Posted by Phreerunner at 16:51