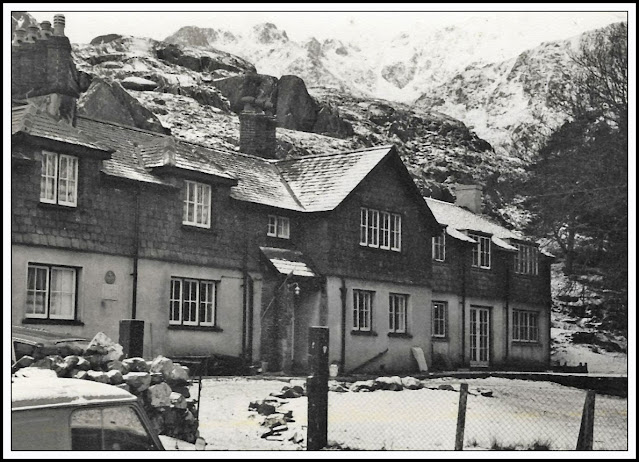 Today's posting was inspired by an email received yesterday from Neil Barrass, entitled "We are the 'old days'!" Neil provided a link to a wonderful old (1948) film entitled 'Youth on the Hills'. What he found striking was the similarity between the equipment used in 1948 and that which we were using in the early 1970s, and he appended one of my photos from that era by way of illustration.

The photo concerned was taken on 28 February 1970 during a Tech Domski Hiking and Hostelling Club (TDHHC) weekend at Idwal Cottage YHA. This may have been my first visit to Idwal Cottage, and a version of the Saturday walk over the Glyders has become one of my favourite excursions, walked many times over the years, and not always without incident (as, for example, described here!).

I have a recollection of arriving at the hostel and being directed to a dormitory that may have been in an outhouse. I do recall being on the top bunk. It was a long way down. The bunks were in three tiers!

Anyway, my archives have jogged the memory of an excellent weekend in good company. Very few pictures were taken on my old Zorki 4 camera, and a scan of the negatives may produce better results than these scans of the photos, but given they are from over 50 years ago, and the negatives are not immediately to hand, so please bear with me.

Who were all these people gathered at a sheltered point on the Glyder plateau? 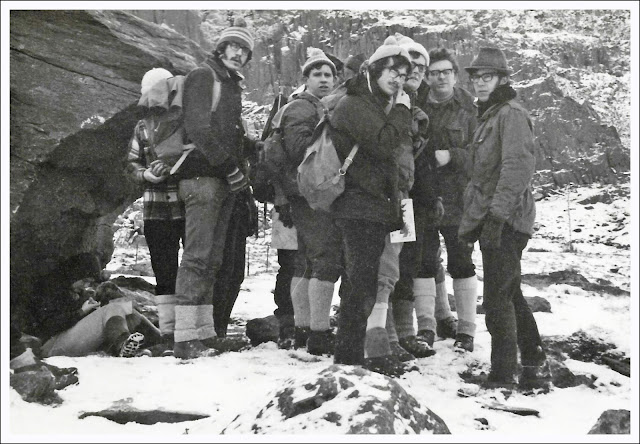 Well, from left to right: Kate Thompson (sitting), Roddy Burns, Gaspar Sanvicens, Howard Gee (RIP), Gary Beighton, Kev Hall, Neil Barrass and Pete Palmer.
Below, at the time I captioned this photo as 'Steeper than it looks'. 'Gas' is in the lead, with (L to R) Roddy, Mike Hope, and far right in the background - Gary Beighton and John Clark. 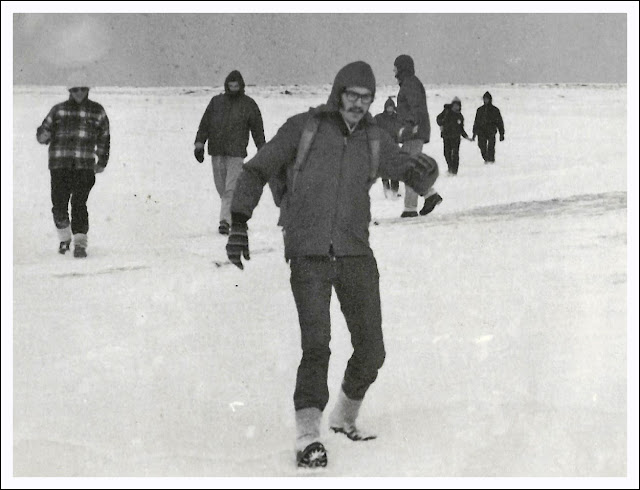 There was an impressive amount of frost on the summit pinnacles, below which Gas is posing. 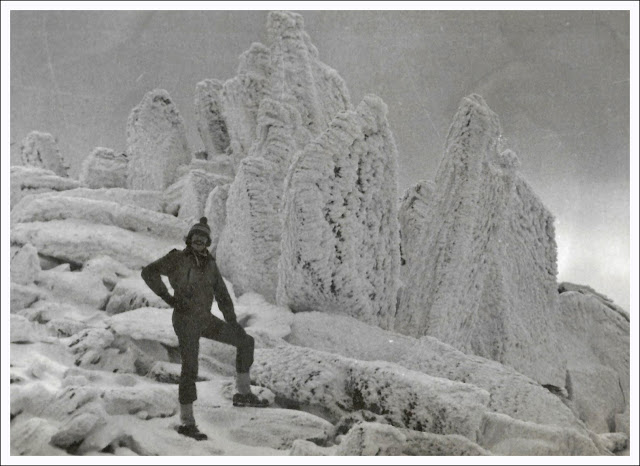 I'm not sure which route we took, maybe Neil will remember, but there's certainly not an ice axe or a crampon in sight. 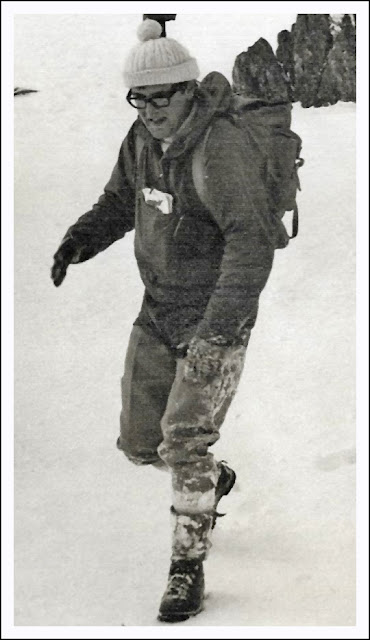 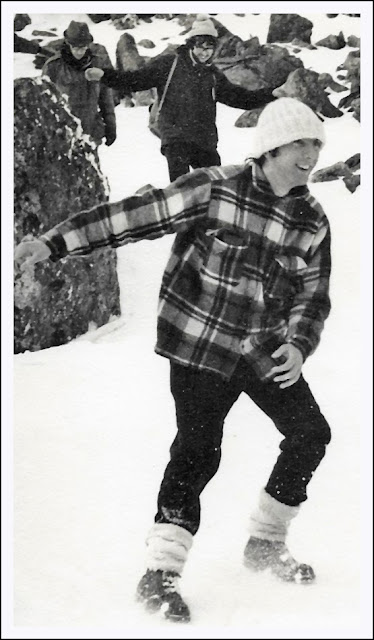 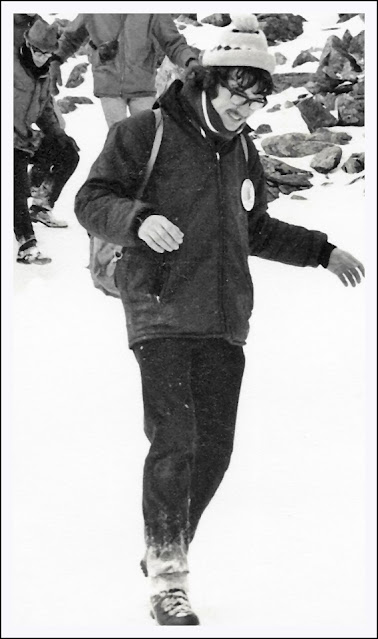 Glissading is good, but safer with an axe, and the enthusiasts amongst us were soon equipped with wooden shafted ice axes that were very similar to those seen in the 1948 film. (I still have mine, and I have an even earlier war department axe made in Cannock that's very similar but has a longer shaft.) 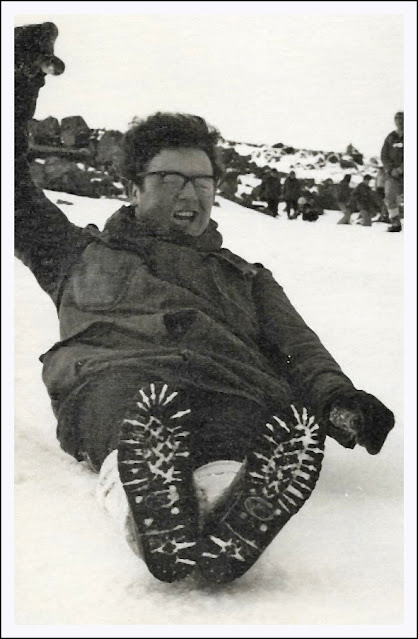 Here's the photo that Neil used in his email to illustrate how winter gear may have changed. Ian Taylor is being followed by Howard Gee and Don Waye. 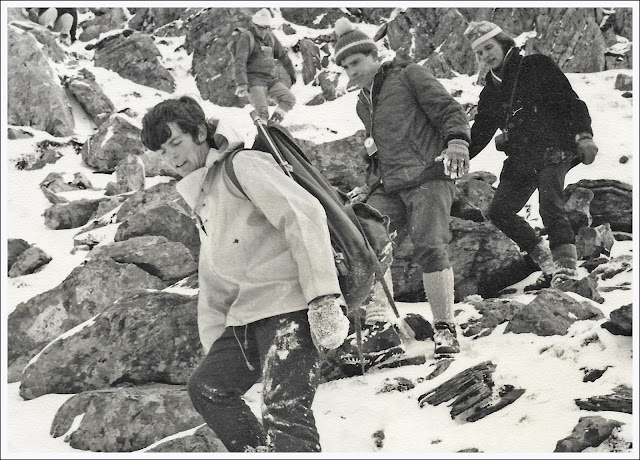 We had great fun, but the weather was cold. On getting back down we realised that Pete Palmer was suffering from exposure. It took some time to nurse him back to health, though unlike Sue's experience with a friend in the same place in the 1980s, no hospitalization was necessary.
I can only find one picture from the following day - there are five more somewhere. We walked into Betws-y-Coed from Capel Curig, pausing for some time en route to make our mark on a beech tree. 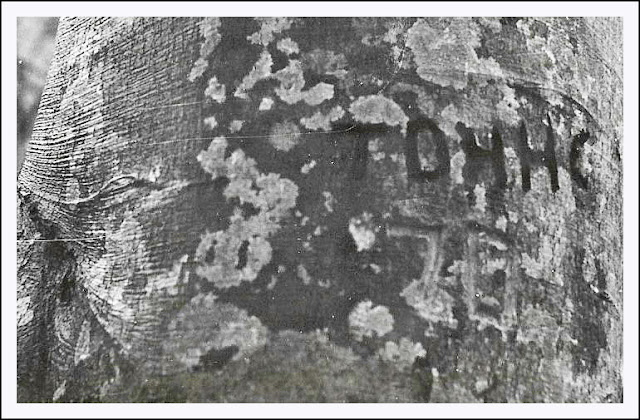 Here's another picture from the early 1970s, showing our gear at the time. 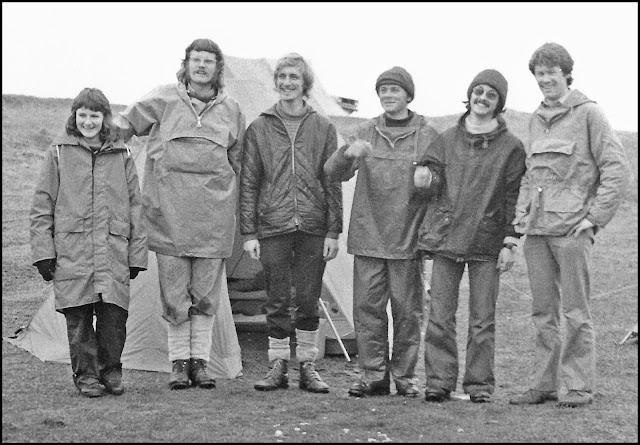 From L to R: Beryl, Roger Freeman, John Clark, Roger's friend who drove around in a Morris Minor estate car with a corrugated roof * Stuart Mellanby, Gary Beighton, and me. I still have that anorak, which in its day completed about twenty Lyke Wake Walks (40 miles across the North Yorkshire Moors).
Whilst I've been writing this, ears must have been burning, as - not having heard from him for many months - a message from Roger with some photos attached popped up. This shows our garb in the mid 1970s, at a time when Hellyhansen and Henri-Lloyd moved into the outdoors market. They were specialists in sailing equipment and their non-breathable waterproofs for active walkers, who soon become drenched in sweat, was possibly a retrograde step. 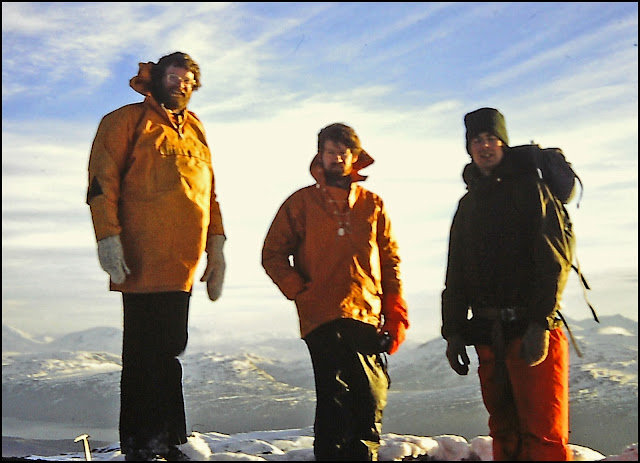 I'm pictured above in my 'Helly', flanked by Roger, and Dave Scruby.
Another friend of ours, Mike Parsons, lived through all this and has recently co-authored 'Keeping Dry & Staying Warm', that I wrote about here. This is the place for you, if you have an interest in the technicalities.
Lots of good memories, also for my mother, who will enjoy reading about some old names that will 'ring bells' when she turns on her computer tomorrow.
Feel free to comment...
* I'm getting confused here - the chap with the Morris Minor was Richard Thompson. He's not in this picture - I think I have confused him with Stuart Mellanby, who came on a few trips. I now think the person on the right in the picture above is Dave Scruby, not John Mansell. Thanks to Roger for attempting to clarify this.
Posted by Phreerunner at 16:25

Thanks for the link to the old film, just going to sit and watch it.
At the back of my cupboards are some vintage clothing and equipment.

I enjoyed that film. Note that women only appear in the height of summer, at the same time as a Rolls Royce. And the youth who demonstrated how to jump onto a trig point? Happy Days!

There was another film on the same site about climbing on The Cobbler which is worth a watch for their antics long before harnesses and belaying.

There was no resemblance between 1948 gear and early 70s gear. The revolution had already happened. In form shape, construction, materials used and COLOUR.
Mike Parsons, formerly Karrimor and OMM.

I stand corrected, Mike. But in the early 70s I was still using work boots with a steel toe cap, old school trousers, a pullover knitted by my mum, and the fabric anorak that I still have. Cotton shirt was base layer. Also had the framed rucksack that was well before the 'Totem' era, and my ice axe from the early '70s is very similar to my much older war department one. The colours were uniformly beige or black (apart from the orangey work boots) until I bought an orange Helly, and, even later, a dark green Henri-Lloyd.