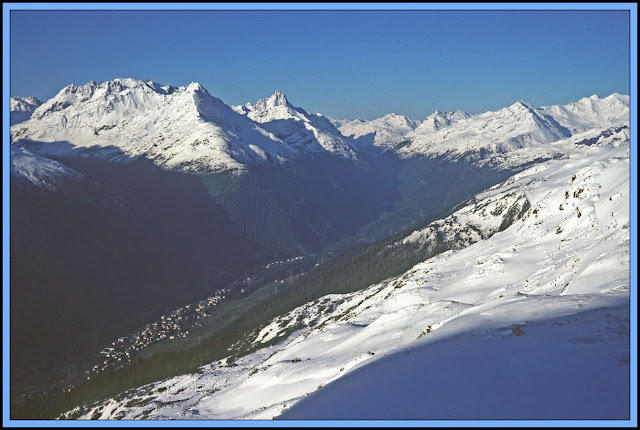 I awoke on my matratz at about 6:45 and got up to wet trousers. The others eventually also arose. We went outside to an absolutely cloudless dark blue sky, and yesterday's snow had frozen to a crisp surface. We went back in to our breakfast - muesli, chocolate biscuits and Primula. I ventured to ask (in German) for two litres of hot water for our brew. 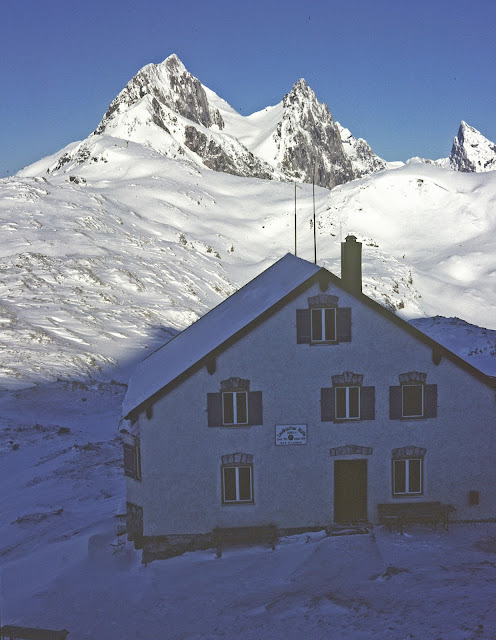 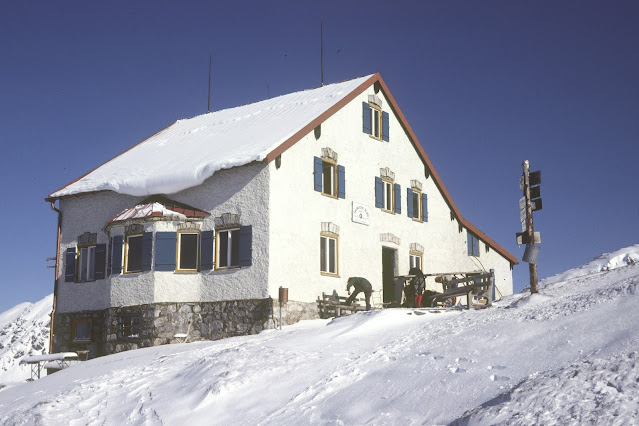 When Colin paid, quite cheap due to lack of beer, the warden asked where were we intending to go? "Ulmer Hutte" Colin replied, "on the route 601". She had assumed we were going via St Jacob in the valley. As we insisted, she said we should take the lower option going towards Kapall-Kopf, the top of the ski lift. However it would still need much care due to the amount of new snow around. 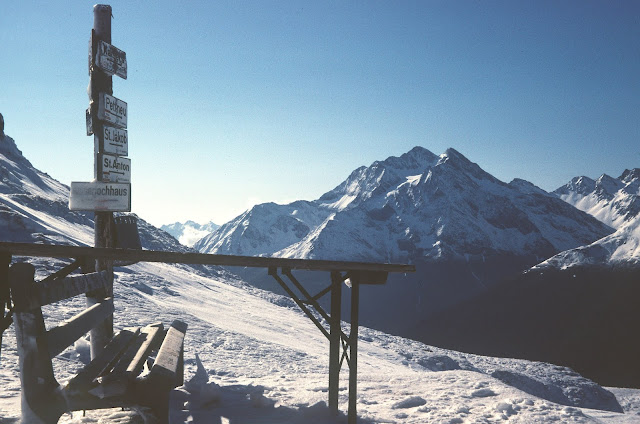 Hoh Riffler from the Leutkircher Hutte

As we set off, it soon became clear that this new snow would make the going very difficult not least because what red splodges had previously been visible were now covered by this new snow. The snow had drifted, and it wasn't long before Martin (the Mad Midget) almost disappeared from view. There was some debate as to the route - Martin was now in competition with Ruaridh as he was equipped with his newly purchased Kompass map.

After much bumbling about, a few splodges were found which led us to a wrought iron crucifix covered in icicles which had been sculpted into beautiful shapes by the wind. 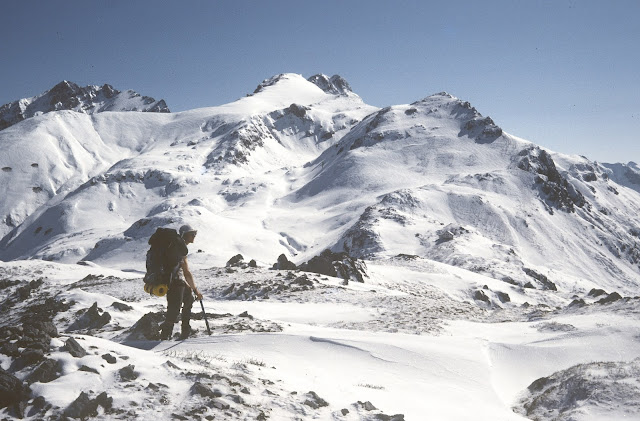 Starting the hard slog to Ulmer 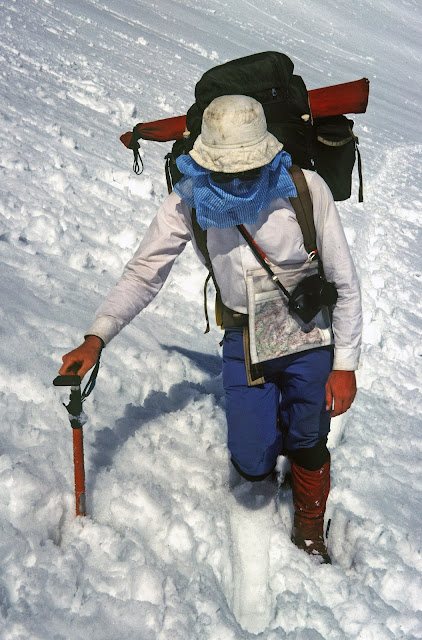 A lot more bumbling; Martin proved not to be immune to the hyper-suicidal tendencies which seem to grab anyone equipped with an Alpine map. A lot of slithering about on snow-covered grass, rocks and trees (!) proved fruitless until eagle-eyed MacDonald spotted a path marker. The Mad Midget was reinforcing his nickname by doing a spiderman act across gully and cornices while the rest regained the path and headed along it, splodge spotting, until we reached another path by Kapall-Kopf. 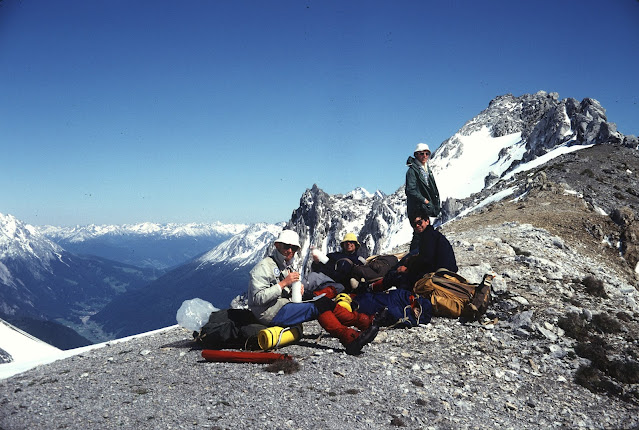 Here we had our first lunch, the day's chocolate issue having already been eaten or melted by the hot sun. Speck (smoked bacon), caraway bread and dates were eagerly consumed (and chewed and chewed and chewed). From here, Martin estimated two hours up to the Mattunjoch. In fact, it eventually proved to take about 2 hours 20 minutes. 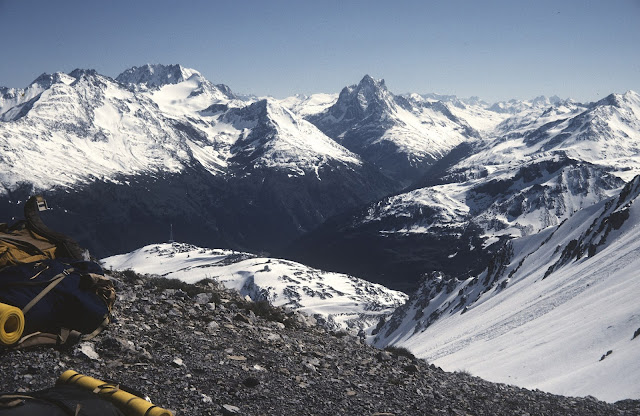 The lunchtime view SW, towards Kaltenberg

Throughout this long slog through snow which was invariably deep, but varied between over boot and up to waist, the sun beat down relentlessly. My Lawrence of Arabia outfit came into evidence again, and was soon copied by Martin except that he hung his tea towel over his face! Ruaridh had a blue J-cloth yashmak over the lower part of his visage, and Colin used a revolting grey/white handkerchief. Dave was content with his silly yellow sun hat.

Martin had trouble seeing through his Batman / Sherpa Banfield sunglasses as they had become scratched through resting in his tit pocket. Consequently, as we now examine the damage, he has one side of his neck more burnt than the other due to putting his head on one side. I note for myself that I have a lighter coloured mark on my right wrist where my ice axe strap was, and that I'm also burnt through the gap at my shirt cuff! 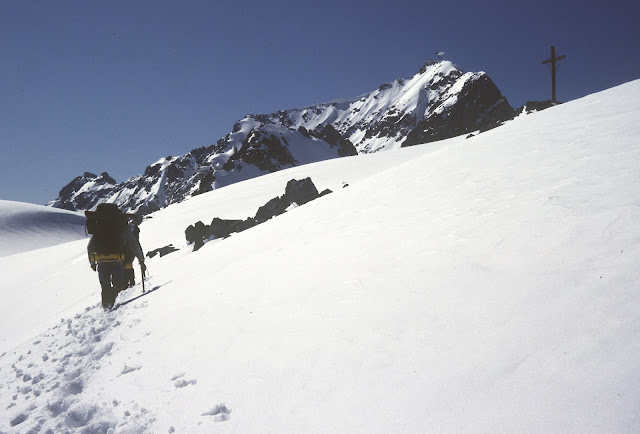 Onwards towards Valfagehrjoch (2543 m), with the Valluga summit in view 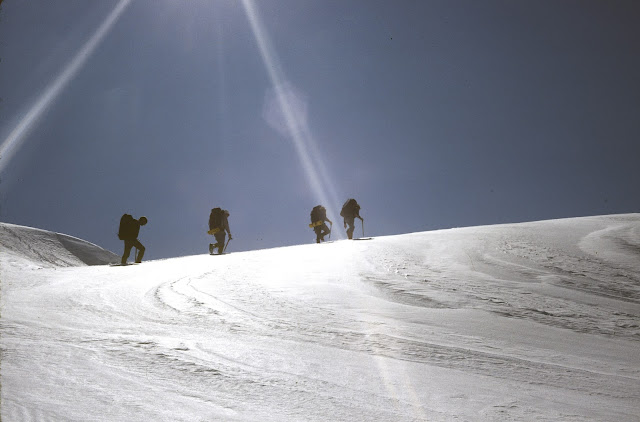 There was a cross at the Valfagehrjoch, and we could see cable cars heading up towards Valluga. There was a horrible motor noise coming from behind Schindler Spitze. We never found out what it was but assumed it to be coming from something to do with the cable car. We had our second lunch here - more speck and brot. The speck was definitely a good buy, even though I say it myself, (bought in my capacity as catering supremo). 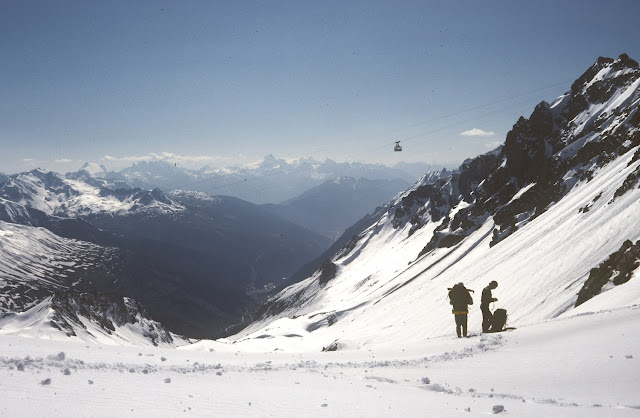 View from the 2543 metre col, with a Valluga cablecar

We reached the - Vorarlberg border and saw down to the Ulmer Hutte and an Austrian Post Office Relay Station. The descent looked fairly easy and Dave fancied a run as usual. However, though a lone skier and a tracked vehicle had preceded us, the going could be described as 'very soft', thus all fast methods of booted descent were out. Another long slog.

Ruaridh got us in to the Ulmer Hutte, very posh. Obviously mainly geared towards skiing in winter. Duvet blankets so no sleeping bags required.

Evening meal consisted of goulash soup and brot, and sausage and salad or schnitzel and rice, followed by apfelstrudel and cream. An excellent meal washed down by apfelsaft. Colin fancied the waitress and kept giving her sweet smiles but he didn't get anywhere. 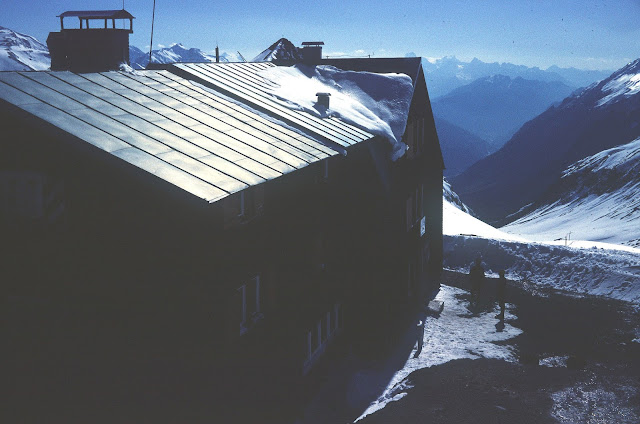 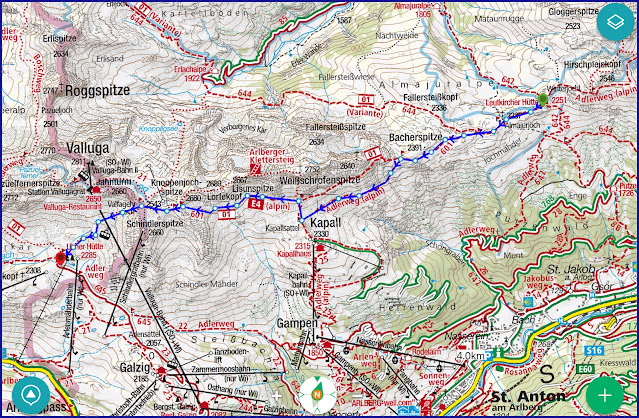 Discussions with the warden revealed that the R601 path was officially closed and that we should not have come down on today's route. He was not prepared to show us the next section - most sensible we thought in view of the conditions. He said there was avalanche danger and that we should keep below 2000 metres.

We decided on a fairly low level route for the rest the British Loonies Expedition.

Several beers, and then a few more. Ruaridh was in fairly dire straits due to lack of schiewasser, whilst any lack of coherence here is a side effect of the beer. Heat exhaustion and sunburn rules ok. Off to bed. PS Martin has now learnt to pour beer. Over to you McP....

Next Day
Posted by Phreerunner at 19:15