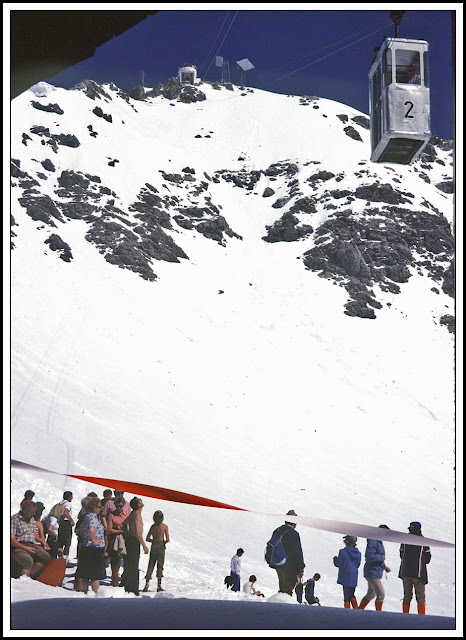 Some Dutch people we had met the previous evening had told us that the weather forecast was for at least three more brilliant sunny days, and certainly this morning dawned bright and sunny. The 40 centimetres of snow which had fallen in the last spell of bad weather would soon be gone.

The warden came to chat to us as we ate breakfast. He was surprised that no one else was up yet on such a beautiful day, and told us the temperature had fallen to minus 2°C last night. He asked whether we still intended to try to go to the Stuttgarter Hutte, but we told him that over the next few days we proposed to take the cable car up the Valluga from the Galtzig station (2093 m), go down through St Christoph, to the Kaltenberg Hutte (above Stuben) and up to the Spullersee. He seemed much relieved at this and wished us 'Viel Spass'.

We trotted down to Galtzig following the wide tracks of a snow vehicle (Martin took a shortcut) and after going all round the building and upstairs and downstairs, we found the departure point. It was not long before the next car left, but when we reached the front of the queue there was not room for the five of us. The twenty minutes until the next car started loading passed quickly. We noticed that here in , as in , orderly queueing seems to be unheard of. The next shock was the price -  115 Schillings each (about £4), and paying seemed to cause some problems as everyone else had come all the way from the valley at St Anton and simply needed their tickets clipped. (However much must it cost all the way from St Anton?!) 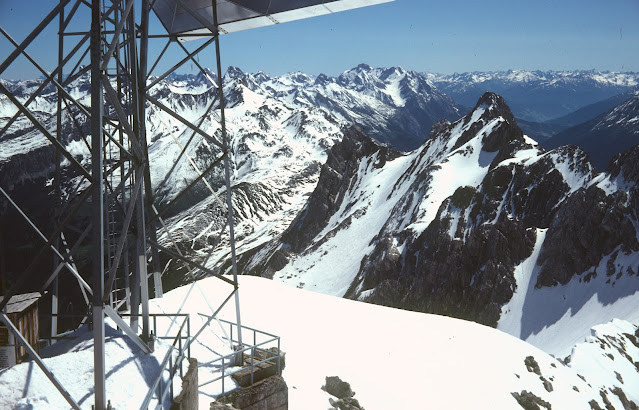 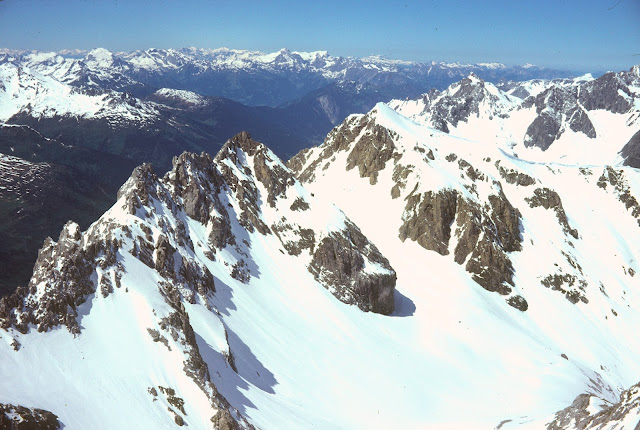 Another view from Valluga summit

The view from the Valluga summit was well worth waiting for. We could clearly see the distant peaks such as Zuckerhuttl (72 km away) and the Wildspitze - a white twin peaked ripple on the skyline. The spires of the Hohe Riffler across the Inn valley, with their two glaciers, beckoned - and our own tracks made over the Mattunjoch yesterday stood out by themselves in the otherwise pure white virgin snow.

One thing which marred the view was an enormous transmission mast between the observation platform and the view of the rest of the Lechtaler Alps. However, a little acrobatics in front of the astonished faces of tourists secured a vantage point free of obstacles. 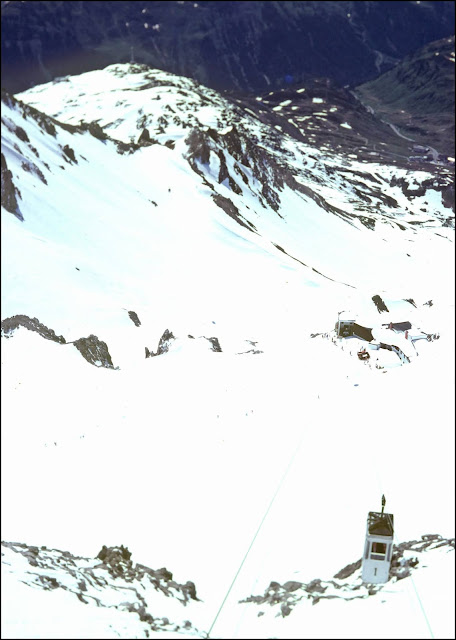 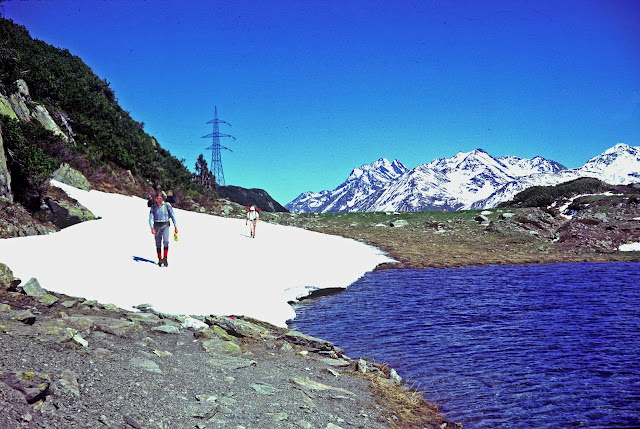 A lake on the path beyond St Christoph
(today's photos are the unadjusted Kodachrome originals, complete with incredible skyscapes)

We had our first lunch just below the Galtzig restaurant, and slid and splashed our way through peat and mud down the path to St Christoph. Not surprisingly it was all hotels and restaurants, many speaking English. A mountain guide about to set off with a group of tourists asked where we had come from and where we were going, and immediately on hearing my accent he directed us in English to the start of our path. It was the first time I had been asked if I was other than Dutch!

We bought up most of the cafe's stock of chocolate, and nearly joined a coach tour when we heard a voice inviting "All aboard what's going aboard".

A steep but short climb in the hot sun caused sleeves to be rolled up, socks rolled down, and in my case shorts to be put on. (Nick had already had his on all day as usual.) Our second lunch stop was on a railway line (?!). 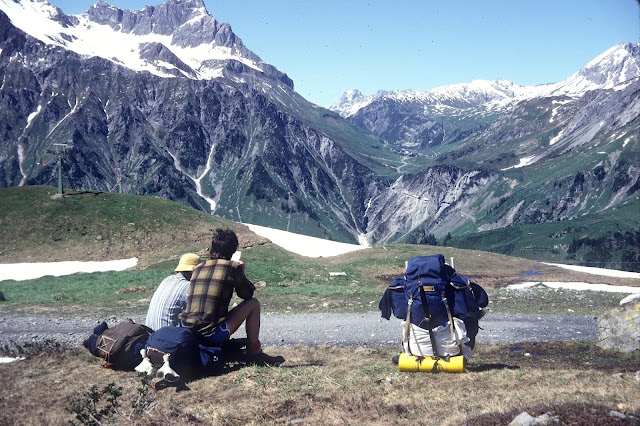 View towards the Flexen road to Zurs

Nick was in fine form and strode out ahead to the Kaltenberg Hutte. We passed a number of notable items of engineering, an unusual concrete construction which turned out to be a road tunnel ventilation shaft (quite artistic considering how uninteresting it could have been made); the Flexenstrasse - a series of tunnels and avalanche shelters across the valley from us; and a hairpin road clinging onto a steep grassy slope leading up to a small number of houses below the Gruben Spitze. 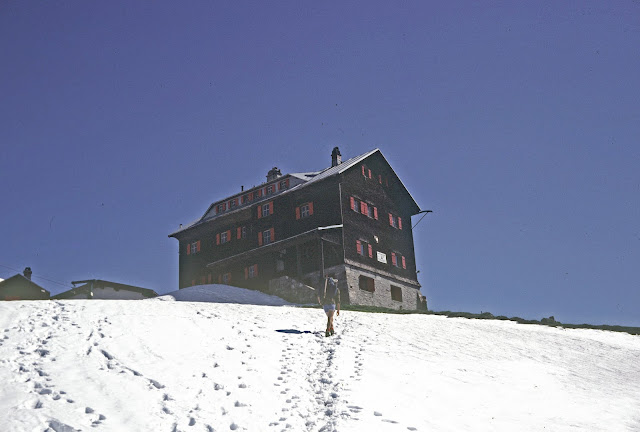 After a stop for tea at the Kaltenberg Hutte, we set about looking for a campsite in the valley leading down to Langen. This proved distinctively difficult to achieve as we were thwarted by uneven, rocky, or marshy ground, or the threat of being kept awake all night by the dinging of cowbells. We gave up all hope of finding a site as the sun sank behind the mountains, and headed for the official site in Klosterle.

However, about halfway down to Langen the ideal site suddenly presented itself - a flat grassy and not too stony area near water. There was no question of discussing the merits of the site. We just threw down our packs and set about putting up tents and cooking a meal, before lying down to sleep amongst the pine trees to the sound of a babbling brook. 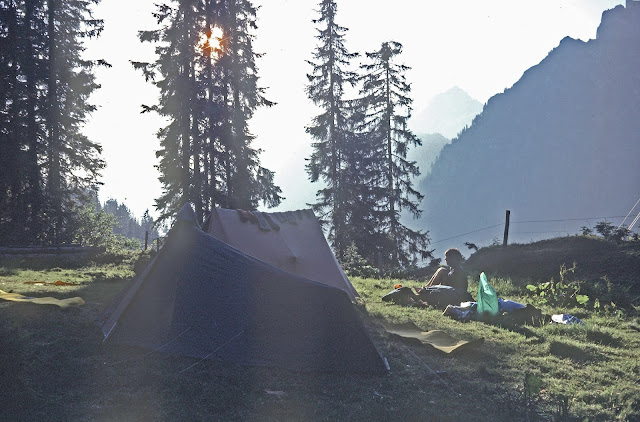 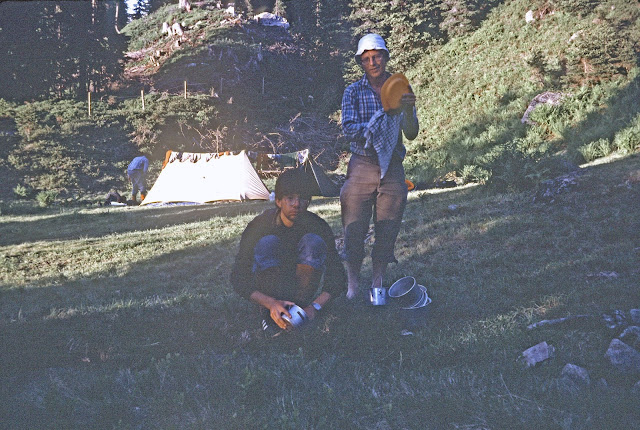 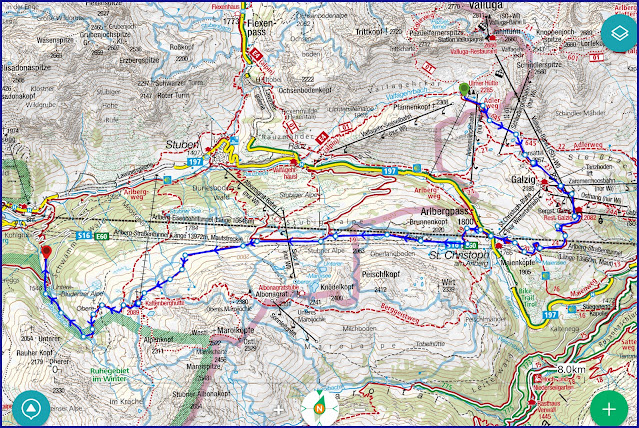