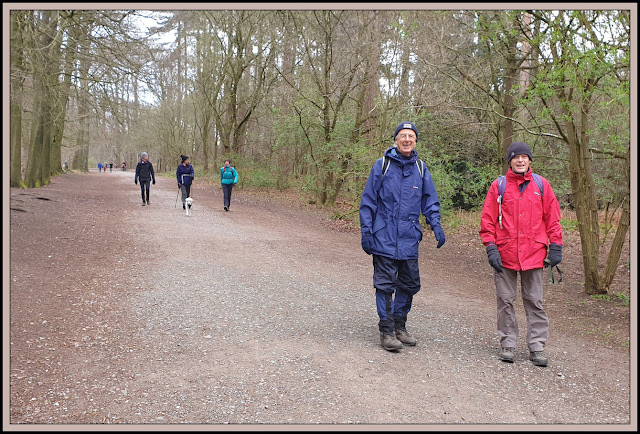 We visited Delamere Forest a couple of times last August - reports are here and here. Today, the maximum allowed group of six, Sue and me, Graeme, Jenny, Paul and Jeanette, (and Rufus - very well behaved today), started again from Barnsbridge Gates, this time checking out route 23 in Jen Darling's 'Walks in West Cheshire and Wirral' book. Whilst last week's walk in the Wirral had changed very little since the 2007 edition of the book, folk have been busy in Delamere Forest, so a number of 'edits' are desirable.

After following the Sandstone Trail to just beyond a bridge over the Chester to Manchester railway line, we turned off towards the Visitor Centre at Linmere Lodge. It's a huge place, with a giant car park, replacing the old centre that now looks sadly dilapidated.

After admiring the new construction and taking advantage of the facilities, we walked on up the road to re-cross the railway, which Jen notes was the last line to be brought under British Rail control in 1947 - six months after the other railways. Due to an 'oversight'.

Go Ape is in the same place as it always has been, but the ropeways look to have been replaced since Sue and I went on the course a few years ago. 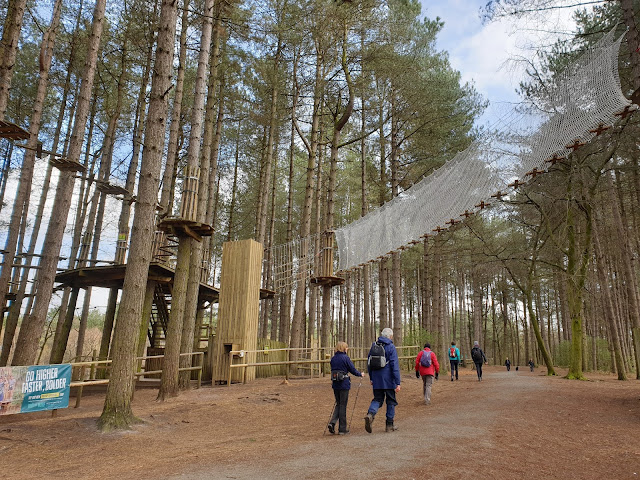 A little further on, the car park at Whitefield has been drastically enlarged. We just walked through, following 'Delamere Way' markers. 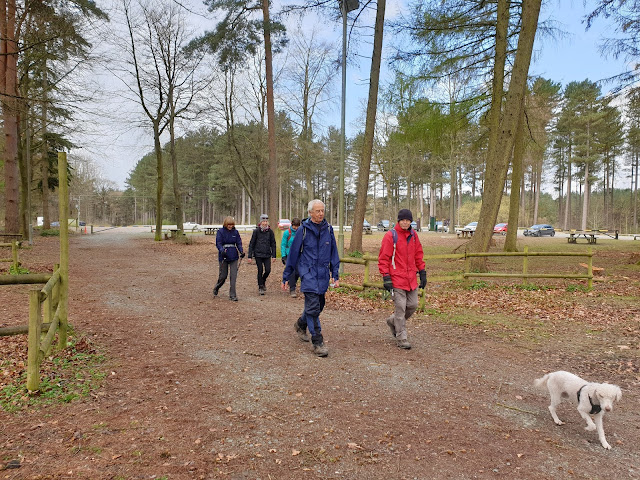 It was a mainly overcast day, thankfully dry, but there were still nice reflections in several small ponds that we passed. 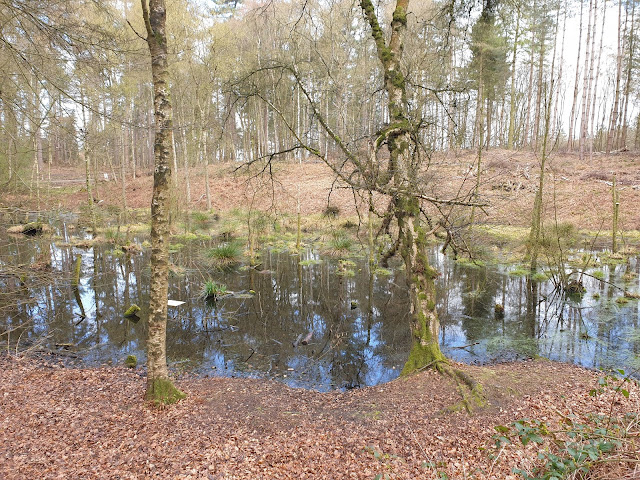 A large picnic bench afforded us the luxury of a socially distanced elevenses break. 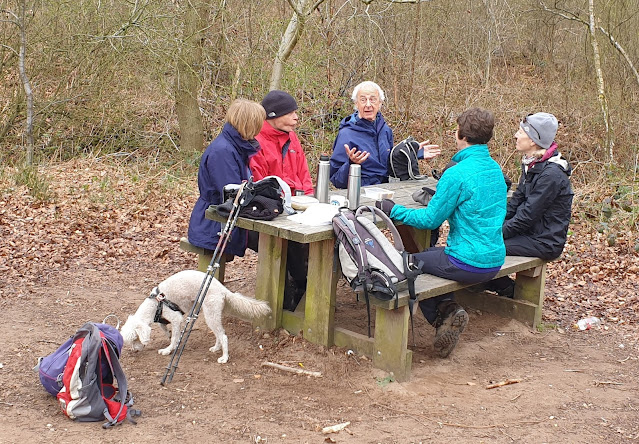 Continuing along the Delamere Way, we missed a turn at New Pool Cottage. Possibly because it has been replaced by 'The Firs'. But the 'web' indicates that 'The Firs' was constructed in 2013, and New Pool Cottage was sold for £2,837,000 in 2017. It's unclear to me, but the left turn to Harthill Bank is certainly by 'The Firs'. (More research needed.)
Soon after that, I missed another left turn, and on re-joining Jen's route, we went back to discover where I'd gone wrong. No matter, either of the paths to Post Office Lane are fine.
Continuing on towards Hatchmere, a medium sized mere surrounded by reeds, we arrived at the B5152 road very close to the Carriers Inn. Apparently it has a 300 year history, and judging by the vehicle parked outside, it hopes soon to be able to re-open when the next relaxation of Lockdown takes place. 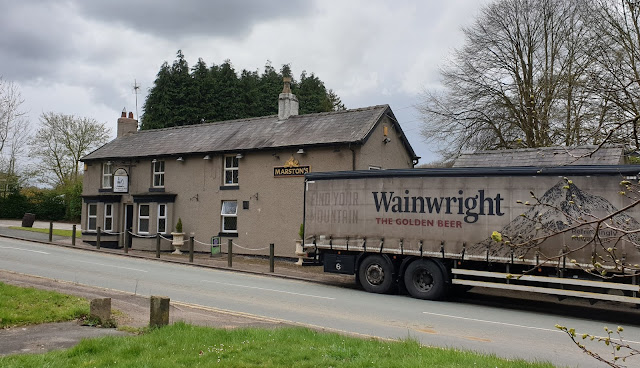 Around the end of the mere, we soon reached a well constructed boardwalk in an area described as 'boggy' by Jen. Here (below) Jeanette points towards some log obstructions in the stream next to the boardwalk, obviously trying to control the flow of the stream. 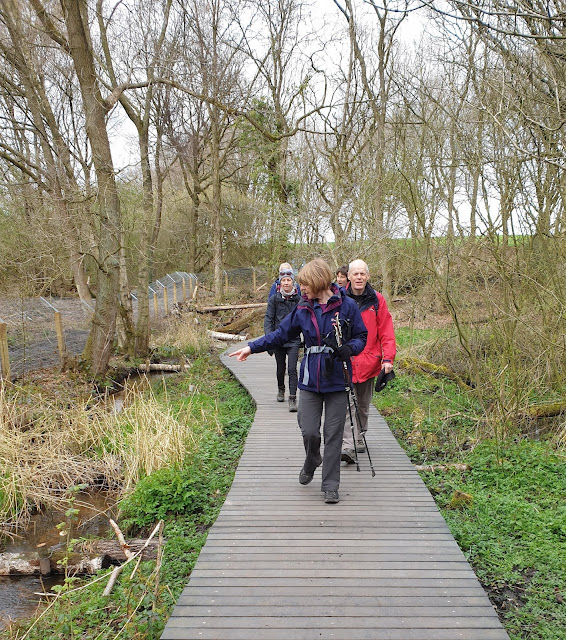 Then we reached a substantial new fence and thought "Beavers?" 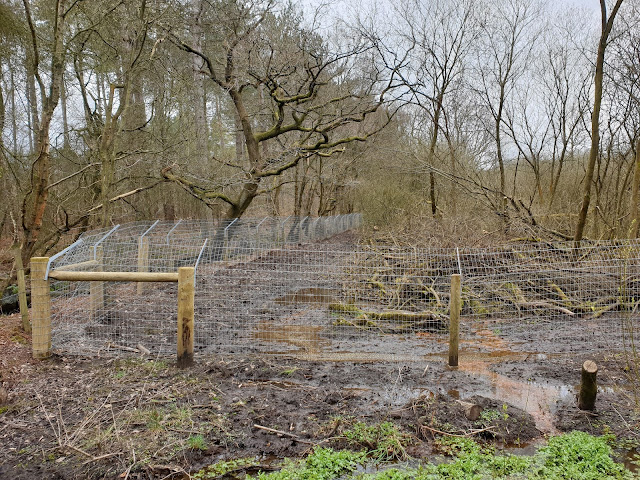 Jenny said she had heard something about this, and later in the day she sent me a cutting that announced that the cost of the beaver enclosure project, some £60,000, had soon been met from fundraising started in August 2020, with the work being completed in time for the release of a pair of beavers on 2 November 2020. They seem to be getting along well, in terrain similar to that shown below - a picture taken on our short walk back from the beaver enclosure to Barnsbridge Gates. 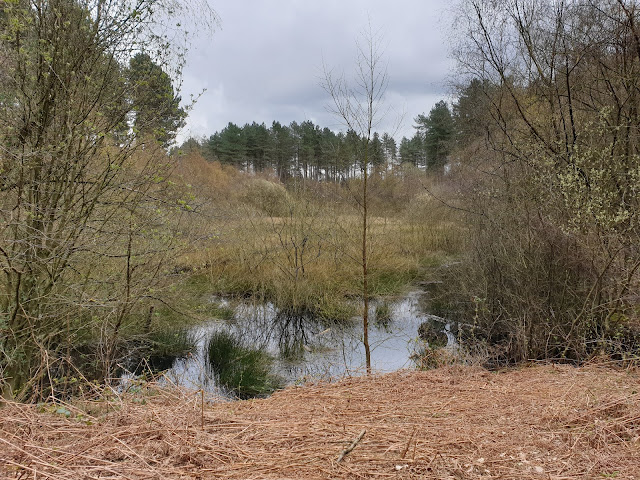 Jenny pointed me to a short video about the beavers - click here to view it.

Our 11 km route, with very little ascent, is shown below. On return to the car park we learnt of the Duke of Edinburgh's death from old age. 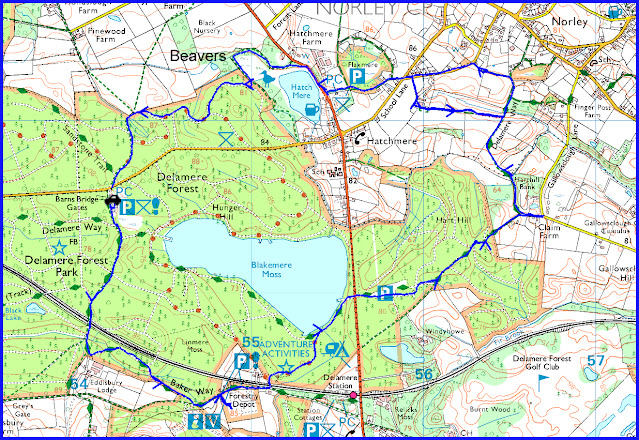 Three more Friday walks are currently planned, but I'm afraid they are all now fully booked to the limit of six people.
Posted by Phreerunner at 19:07

Glad you managed an outing. Lovely day too.