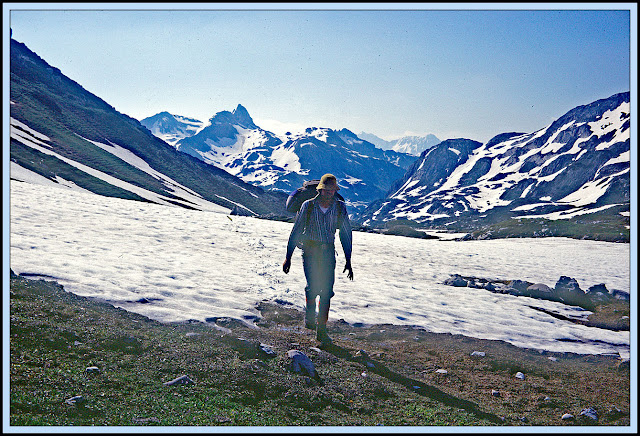 Nick, as usual, was up very early and went outside the tent to prepare breakfast. I found that eating breakfast outside was far easier than in a sleeping bag.

The other tent got up in their usual slow and leisurely way, and took down their tent even more slowly. [Due to lack of urgency on the part of the sun, in drying the tent, and us, as we favoured lingering at this final high level site - M]

Because Ruaridh was going his own way to join his parents in , we gave him some bread and cheese. Sometime after 9 am, we set off for Bludenz after a farewell picture from RM's P in which Martin and Colin displayed their disgusting handkerchiefs.

Martin soon left the gang of four for a boy stop, the bran in our Home Mixed Super Muesli having got to him in record time. We then set off over the snow (the last of the holiday) and dropped below the 2000 metre mark for the last time. The sun became very hot. It was then revealed by the Hike Planning Sub-committee that we had a 600 metre climb to face, and that in our usual topsy-turvy fashion this would be when the sun was at its hottest.

Dave and Colin raced down a snow slope (no deep holes this time). We crossed a stream and walked down into the valley, the sun getting hotter and hotter. Lots of photo stops. 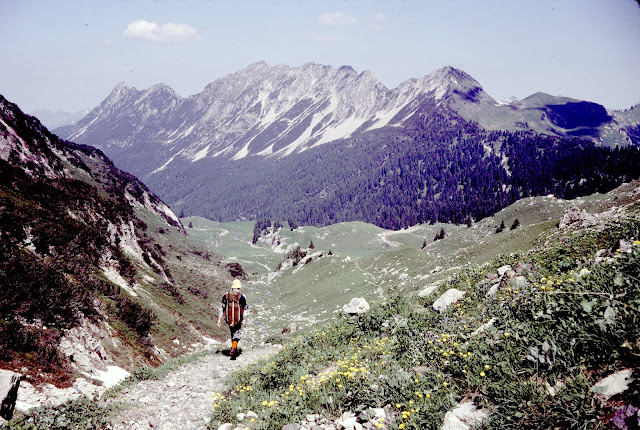 The view north west towards Lagutz

We came to a village, which although it looked pleasant enough at present, is no doubt very tough living here in winter. There were lots of stacks of logs in evidence. Nick saw an old man with a very long pipe which impressed him. We then carried on down hill, getting hotter all the time. 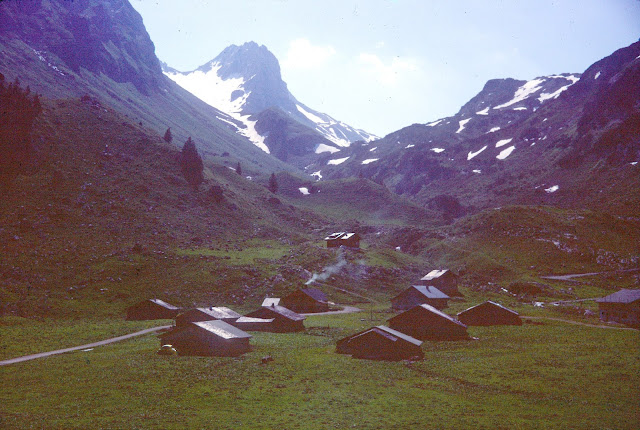 We found some goats who didn't seem at all camera shy - many pictures for everyone. Colin managed to induce one to feed from his hand and poo at the same time. 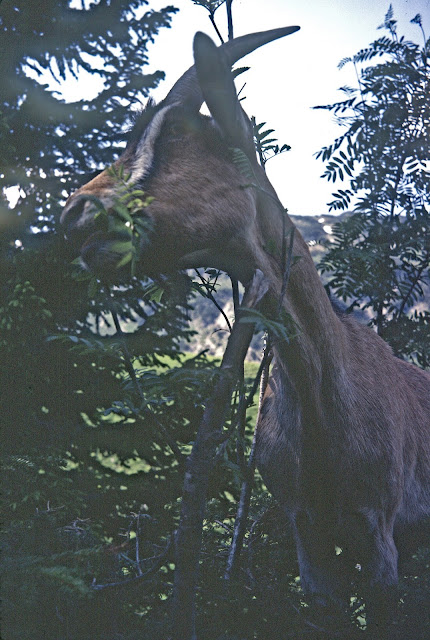 We continued on down the hill. Dave decided that he was (as usual) hungry and concluded that we ought to have dinner before we left the shade of a forest. Amazingly, the others agreed to this very sensible suggestion. The only rational explanation of this is that they had all been zapped by the sun. We stopped for about an hour, having our bread and cheese and a brew. At this point a butterfly got attracted to Dave's silly yellow hat and landed on it. It was assumed that it mistook the hat for a flower and Dave was urged by Colin to do flower impressions whilst he got his camera prepared. However, Colin's blunderings as he tried to get into a good position frightened the butterfly away. 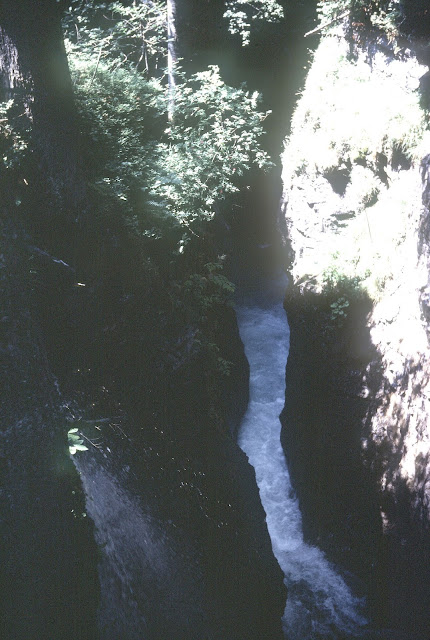 We set off again past a strange wooden construction which Nick investigated at length and found to be a triangulation station. We then reached the bottom of the valley and crossed the stream, which at this point resembled Cheddar Gorge. We then set off up the hill. Of course, at this point the sun was at its hottest, and Martin began muttering about how foolish we had been taking the low route when we could have done the high one. On the lower part of the climb the heat became unbearable. This didn't seem to affect Nick, who charged off as usual. Dave of course lagged behind. Fortunately a large slow-moving cloud now blotted out the sun, and the rest of the climb was done in a relatively cool atmosphere.

We stopped for water near the top, and it soon became obvious that Colin was suffering from the heat. He had a towel draped around his neck and handkerchiefs on his head. Martin seemed to be almost absolutely knackered. And so we started a very slow, hot, sticky descent into Bludenz. On the way, Dave (charging on ahead) had a sort of conversation with some (Austrians?) in German, English and sign language. It appeared that they were making for the Freiburger Hutte. Considering it had taken us seven hours and it was now 4 pm, I would have expected them to look a little more concerned. Perhaps they knew a short cut? The high route? 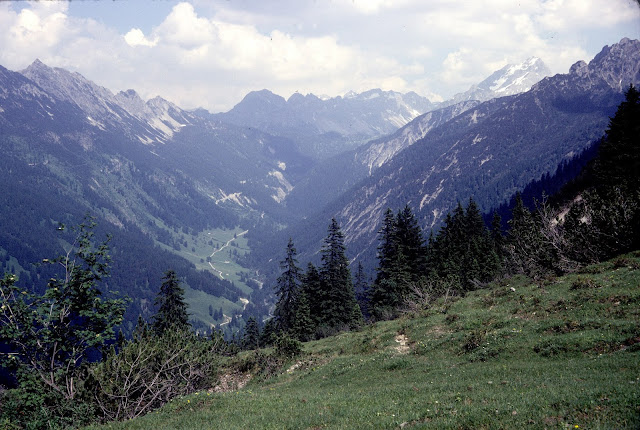 A final view of the Lechtalalps from Tiefensee Sattel (1562m)

The path down was a long series of hairpin bends with the occasional very steep path cutting off the corners. It was a big effort to stop yourself going down too fast. We had a rest half way down but completed the last section very quickly. After a quick trog through a field we were in the town and soon found the campsite. The proprietor was very helpful and directed us in English to our site.

The tents were quickly put up in the familiar L-shape by Dave and Martin. We then went for a wash. Most of the people in the washroom appeared to be English - they seemed a rather smooth looking lot. They even had towels and flannels. After much confusion involving the men's/women's washrooms and a rationing of shampoo, a much cleaner group set off to the town to find out where the railway station was, and to find somewhere to eat. Martin got worried about the restaurants closing and got ratty with Nick and Colin who tended to dawdle a bit, looking in shop windows, etc.

We eventually ate at the first place we had looked at. In the hot evening it was pleasant to eat outside with a couple of beers. We all had a soup - the fried pea soup was unusual, and a meat course which was supposed to be typical Austrian but appeared to be the English meat and two veg type. After the meal we went back to the campsite, where there was more toilet identity confusion and Dave discovered that ladies get proper toilets whilst he has to squat above a hole.

Anyway, I hope this long and boring diary entry makes up for the supposedly inadequate previous one! 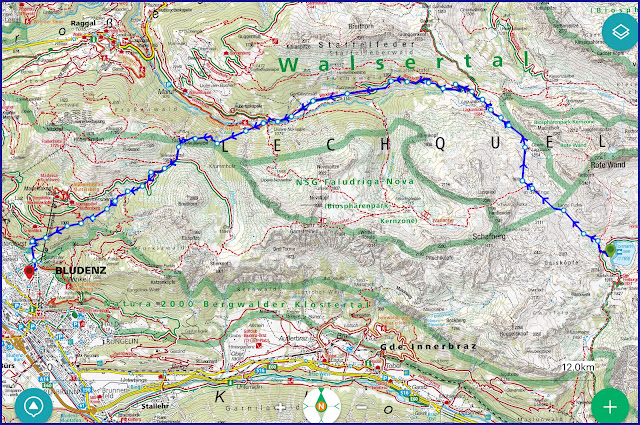 There were lots of thunderings and walkabouts in the night - for once this was not the exclusive privilege of this diarist. Dave's tent luckily did not leak this time during the resultant heavy rainstorm, despite the river which suddenly appeared from beneath his rucksack at about 3:45 am. (Was this Martin's water bottle leaking?) We wondered whether we might need to evacuate the tents in favour of the nearby rusting hulk of a lorry, but were discouraged by a sudden crash of thunder immediately overhead. At last, to sleep - very hot but cooling after the gewittering.

We rose and shone to 'Rise and Shine' orange juice quite lately at about 8:15. A second wash in 24 hours was had by some, then off to the Bludenz bahnhof after calling in at the shop for essential supplies (beer and lots of locally manufactured 'Suchard' chocolate).

We had been woken at about 7 o'clock by church bells ringing, accompanied by a local dog howling. These had continued every 15 minutes and were still going when we left. The Austrians appear to be very religious judging by the number of wayside shrines and crucifixes, and on Sunday mornings they all dress up in their best togs just like in the picture books.

In spite of Colin's phrasebook, due to a misunderstanding I managed to buy return tickets at the first attempt. This mistake was soon corrected, but rather painstakingly as each ticket must be separately written out and stapled in its own little folder. The cost was 208 schillings (£7) each. A quick 'ss tut mis leid' sorted things out. It was established that we must change at Sargans. 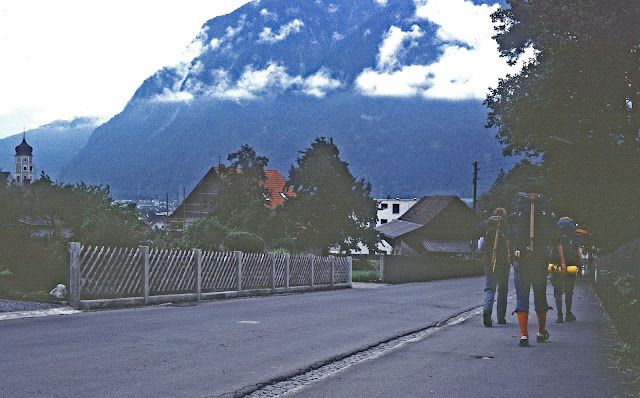 The train was late and full. We were stuck in between carriages and blocked the toilet with our rucksacks. I was first accosted by Yugoslavians with interesting looking drinks, and then went to talk to two young Swedes who were interrailing. The others antisocially kept to themselves and 'read' the sports pages of my 'Der Bild'.

After putting our watches back and changing at Sargans, we boarded an even more crowded train to . This train appeared to come from . Italian is a language of which I have absolutely no knowledge except 'pizza' and 'spaghetti', so I had to resort to sign language when two middle-aged Italian signoras asked whether we had arrived at , just five minutes after we had left Sargans.

Views were very similar to those on our way out. The weather, however, was a lot hotter and there were many sun worshippers on the shore of the Zurichsee.

On arriving at the hauptbahnhof, Martin bought a Sunday Times, from which we immediately discovered the weather in the had been lousy. I then bought four 24-hour 'season' tickets for transport to save money (SF 3.50 each) and we proceeded to the campsite via number 11 tram to Burkliplatz, then a number 65 bus.

I surrendered my passport in exchange for two numbered discs to be hung on the tents. These were to be collected in the morning after 7:30 am.

A late lunch was eventually gratefully eaten - bread, tomato, and an unnamed cheese, very good, purchased respectively in Bludenz, and Pettneu. I had earlier bought some juniper berries in Bludenz (rare in but used by Delia Smith) and now bought some salad herbs before catching a number 61 bus back to Burkliplatz with the others.

It was oppressively hot - I wished I had a clean t-shirt and shorts instead of scruffy hiking shirt and breeches. A long walk around the list of restaurants from 'Hitchhiker's Guide to ' proved that most were either too expensive, closed on Sundays, or closed for the holidays - most disappointing. 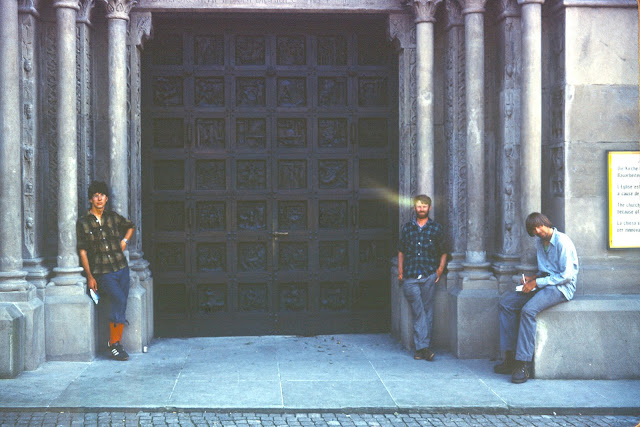 Back in Zurich outside the Grossmuenster 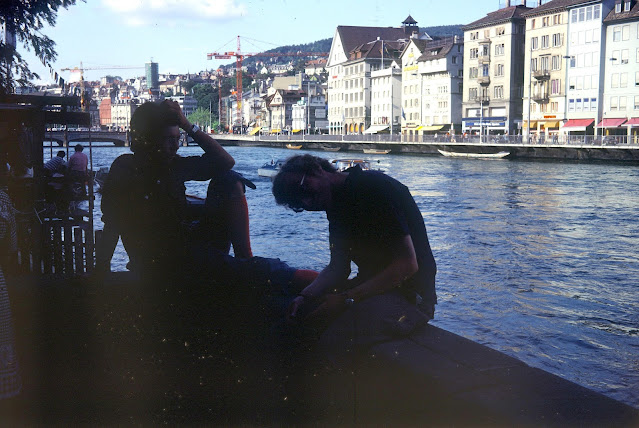 The distinctive Grossminster was closed for renovation so we couldn't even look around that. The rest of the gang showed their disapproval by looking in the many sex shops and watching the Olympics in TV shop windows. The 'Oliver Twist' English type pub was soon unfortunately discovered - colour TV on which the 10000 metres was watched. Very interesting toilets here, the flushing was controlled by a photoelectric cell when the user left the area.

A meal was had at the Trattoria pizzeria Santa Lucia, where they again spoke Italian. A real wood fired oven provoked Dave and Colin to eat pizzas, whereas Martin and I ate pasta. All with side salads, followed by cappuccinos except for Dave who was awkward (and thirsty) and had Orangina which was not as good as the genuine French variety sampled in great quantity by me last year. An excellent meal costing about £5 per head.

Enjoyable Mediterranean climate type evening was a suitable end to a very enjoyable holiday. Full of variety, though I must admit to disappointment that we didn't have hailstones, as every other sort of weather was apparent at some time or other.

Colin now wanted to sell a one-way ticket to to a Swiss girl and fumbled furiously for his phrase book. Now back to the campsite and tomorrow ... duty-free and finally ... w w work.

No hassles or hiccups in our bus / tram / train / taxi journey - all stops to Crumpsall in Colin's case. Duty free maxima of wines and spirits duly purchased. BAC 111 again. Total zap time for me 4½ hours, and then to work after a most refreshing and enjoyable two weeks despite strange weather and 'schnee, schnee, schnee' (Wurtemburger). Even the hero badge held out. Debts were settled despite Dave's slow motion mini computer, and total cost of holiday worked out at around £250 each.