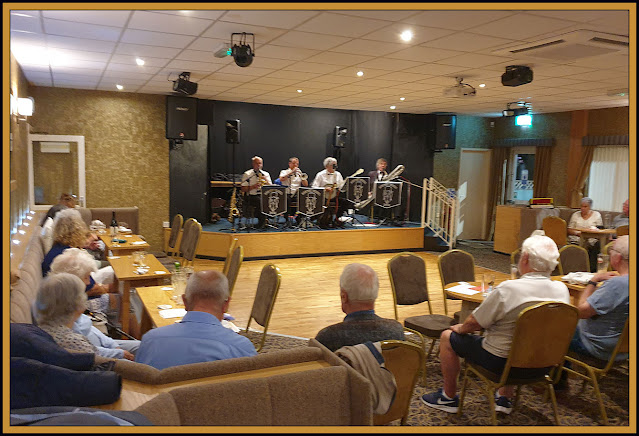 Another jolly evening at Eagley. The last time this band played here was on 18 November 2019, and I think the 'flier' for tonight's performance has been taken from then:

"Andy Henderson - cornet, Willy Entwistle - reeds/violin, Colin Turner - bass saxophone, Chris Howse - banjo, guitar and vocals, John Smith - drums, a band of first rate musicians producing a sound which can best be described as a miniature version of the Pasadena Roof Orchestra, playing jazz and dance music as it would have been heard in the hotel, dance halls and clubs of 1920's America. Their music draws on the repertoire of Jimmy Noone, Clarence Williams, Bessie Smith and even Bing Crosby among many others, with vocals to the fore."
This time there was no drummer, and Andy Henderson has been replaced by a chap whose name I can't remember (nor could Chris Howse remember it when he was doing the introductions - perhaps one day he'll have to resort to "My name's Chris, and this is my band.")
Anyway, about sixty folk turned up for a most pleasant evening of trad jazz. Excellent.
Posted by Phreerunner at 09:40