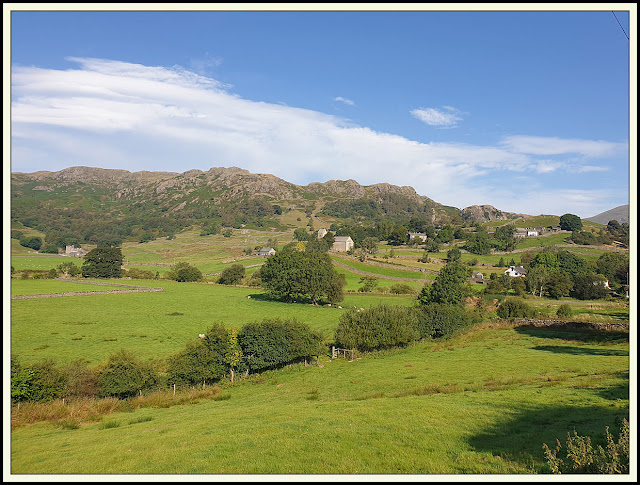 My university contemporaries, David and Linda, and Don and Liz, chose a tremendous day for us to join them on this circuit of the hills above Kentmere. We left a car in Staveley, failed to find a parking spot in Kentmere, and finished up starting from a lay-by a couple of km south of the village.

There were fine views ahead, as we walked up the road to start the 'Horseshoe' outside St Cuthbert's church - seen in the centre of the picture above.

We were soon toiling up the rough track to the Garburn Pass, oozing gallons on the hot, humid day. Beyond that, I briefly took a break from languishing at the back to snap the others on the path up to our first summit - Yoke. 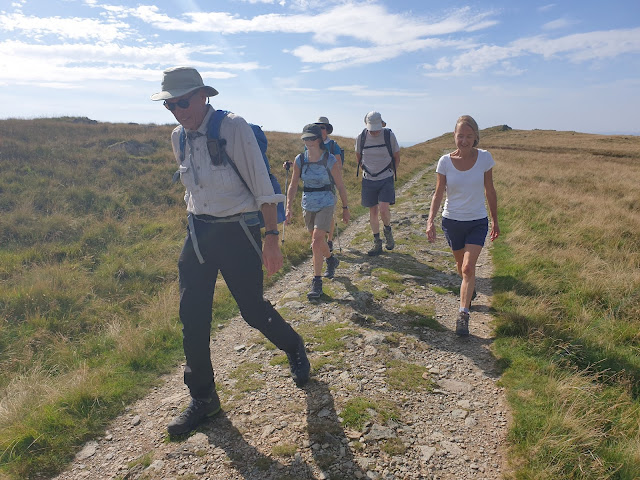 Moments later, I was getting left behind again. 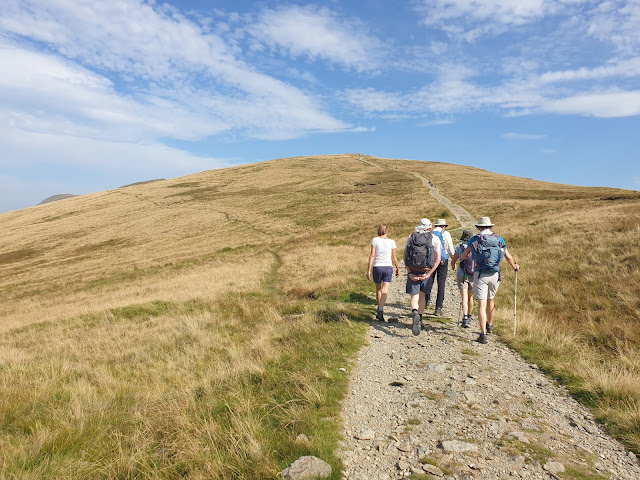 I wonder whether Conrad can identify the hills on and near the far horizon in this view from Yoke; I'm sure BC could name them all. 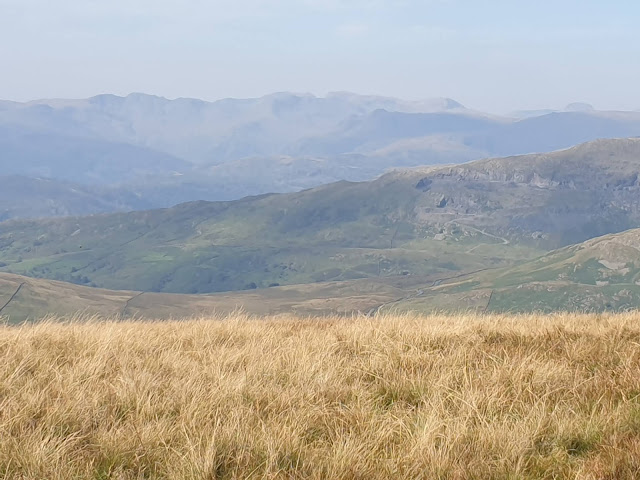 We only saw a dozen or so people all day, but I had to find an unusual angle in order to exclude people on the top of Yoke. The rest of my party, heading eagerly towards Ill Bell, have become dots on the path ahead. 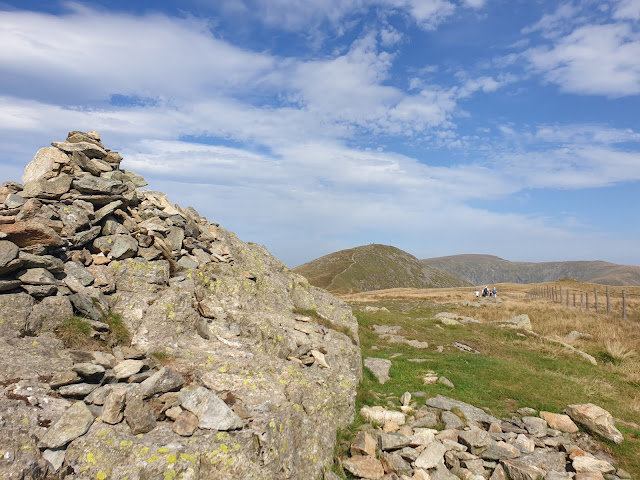 There's a small tarn just beyond Yoke. I expected to find Sue swimming in it, but she was too busy dashing on ahead. 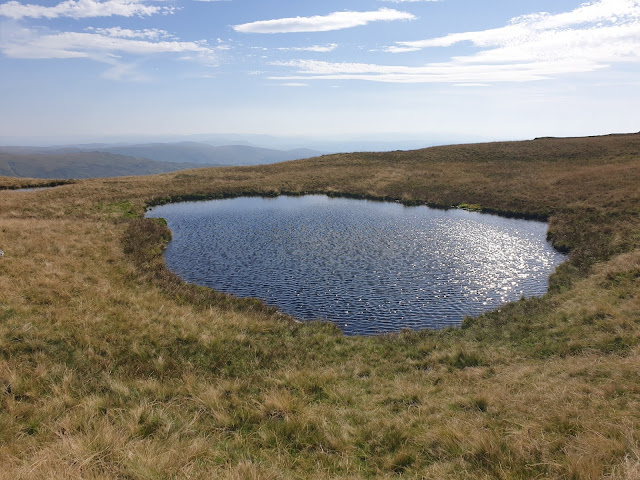 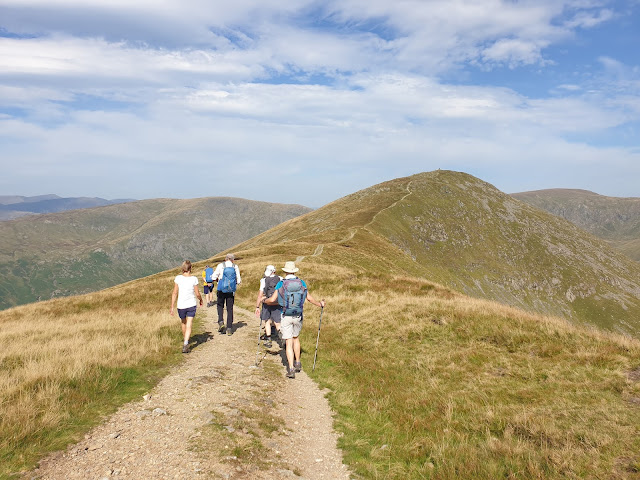 We paused for a while on the summit of Ill Bell, with good views all round. 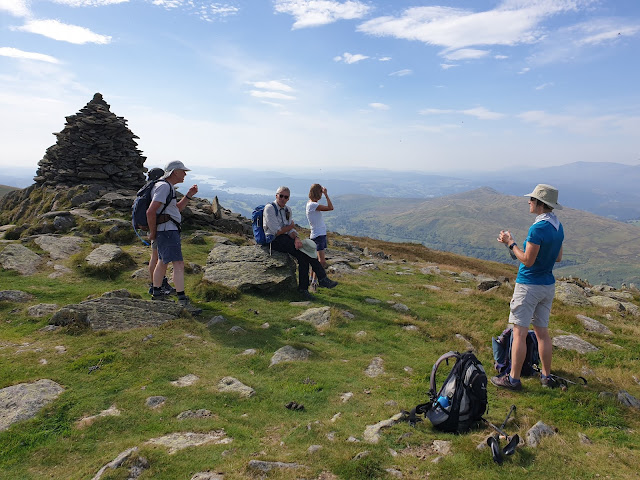 From Ill Bell, the path ahead swoops down to a minor col, before rising again to Froswick. 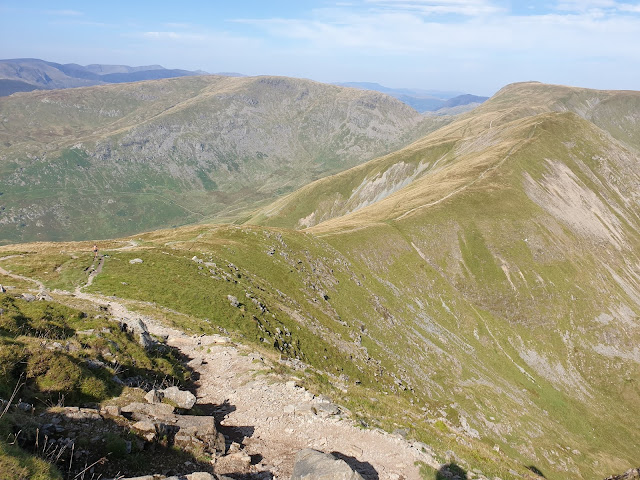 Ravens danced in the thermals as we enjoyed our lunch just below the summit of Froswick. 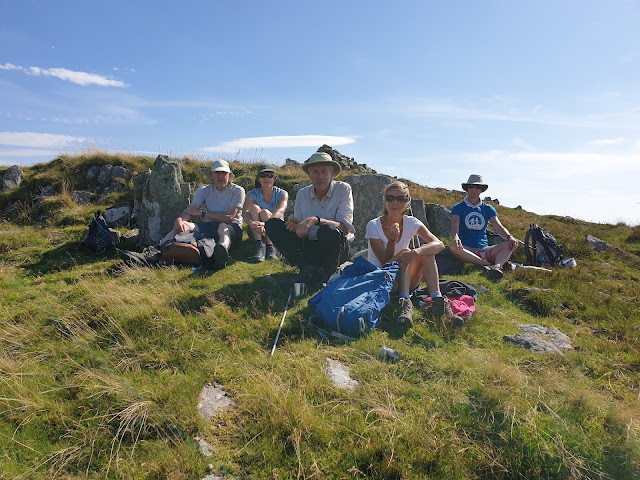 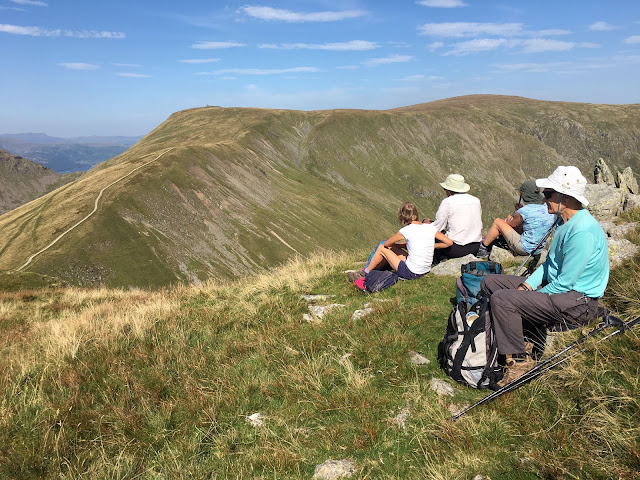 There were good views ahead (above) towards Thornthwaite Crag and the other High Street summits, and back to Ill Bell and Windermere (below). 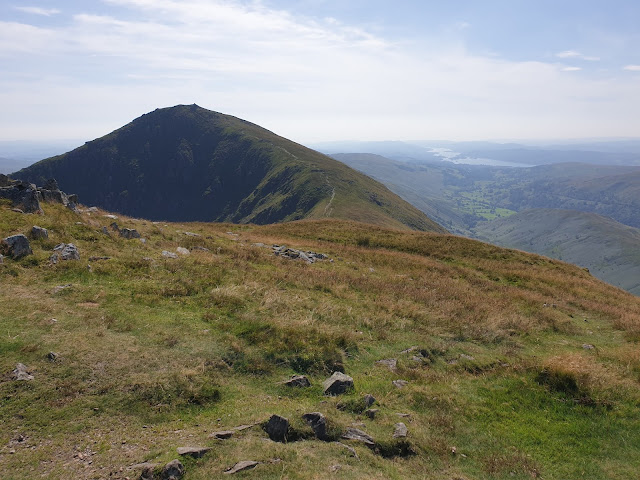 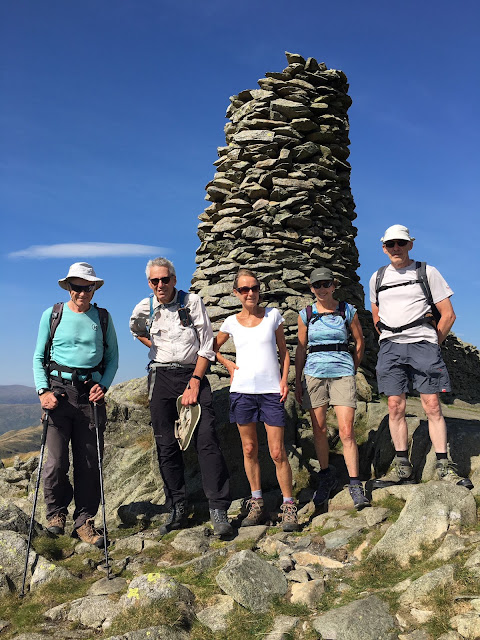 Here we are at Thornthwaite Crag (above), with a view across Lakeland (below).

Another picture was taken at the high point of the day - Racecourse Hill, 828 metres, the summit of High Street. 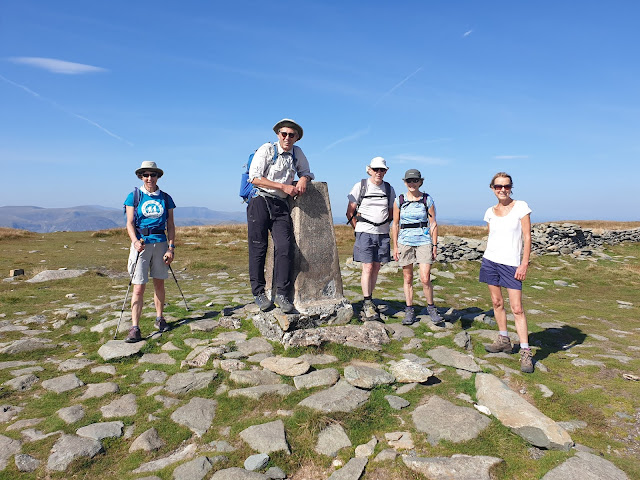 From there, we trundled on to Mardale Ill Bell, the climbing of which didn't extend us. Sue posed, with her hat under Froswick. 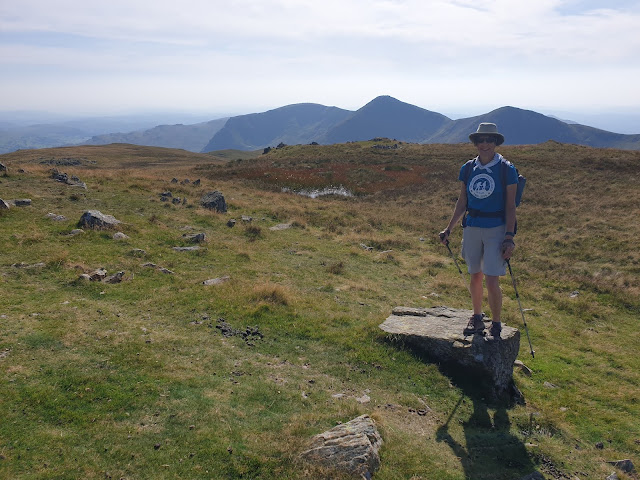 We had a jolly time on top of Mardale Ill Bell. 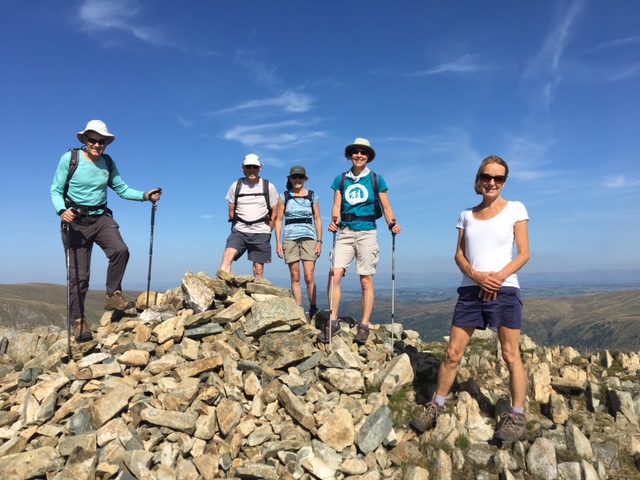 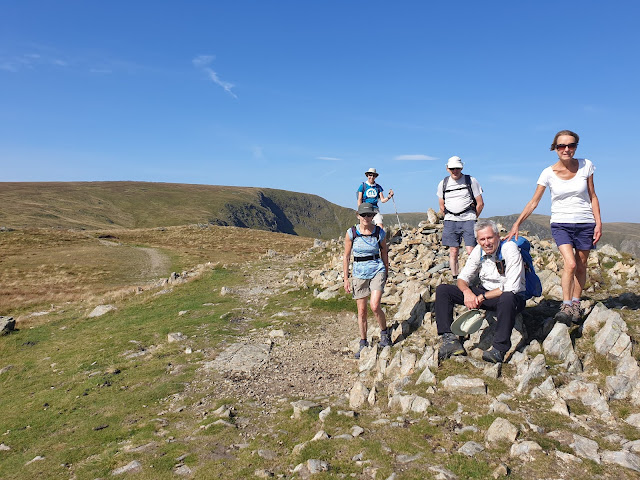 The descent to Nan Bield pass follows another good path, as they all were today after a period of fine weather in the Lake District. There's a very substantial windbreak at the pass, which our party is just reaching in the next picture. For those lacking in energy, there's an easy descent to Kentmere from here. 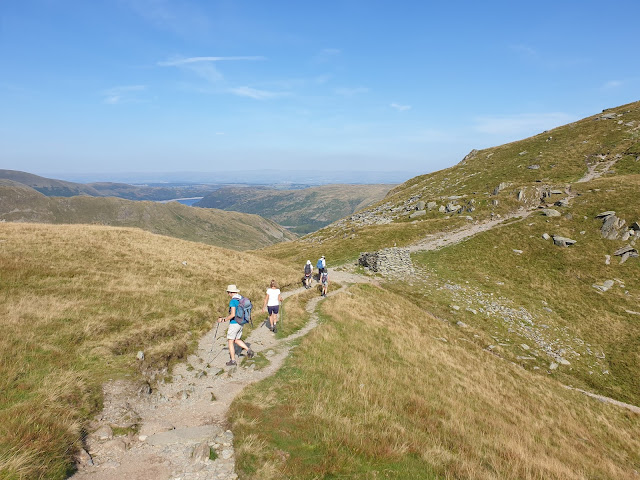 We, of course, were not lacking in energy despite our encyclopaedic list of medical conditions, mainly associated with old age, and we proceeded happily up Harter Fell, with fine views of Small Water and Haweswater far below. The recent dry spell seems to be reflected by a low level of water in the reservoir. 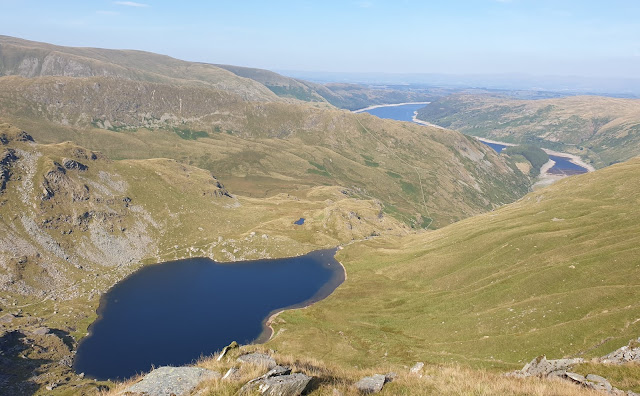 The others raced ahead, you can see them on the path shown below, whilst I lingered to enjoy the views. 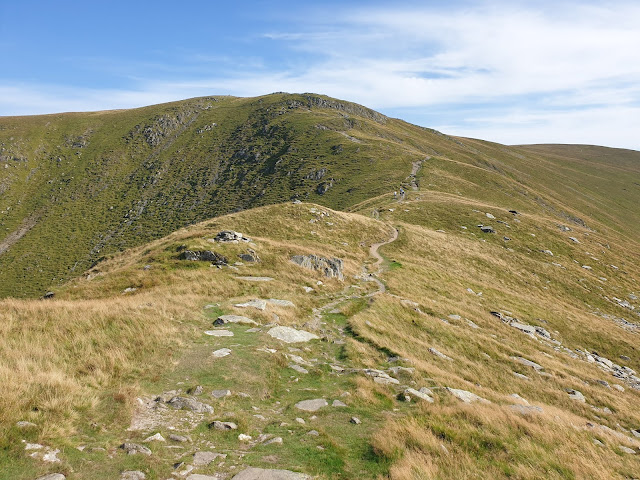 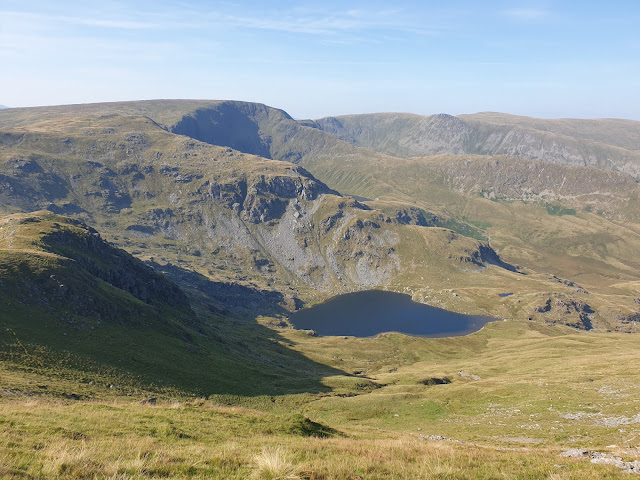 Beyond Small Water, Blea Water is just visible below the bulk of High Street
It's quite a pull up to the summit of Harter Fell, but that brings the serious ascent on this walk to an end, so here we supped the last of our provisions. "It's all (mostly) downhill from here!" 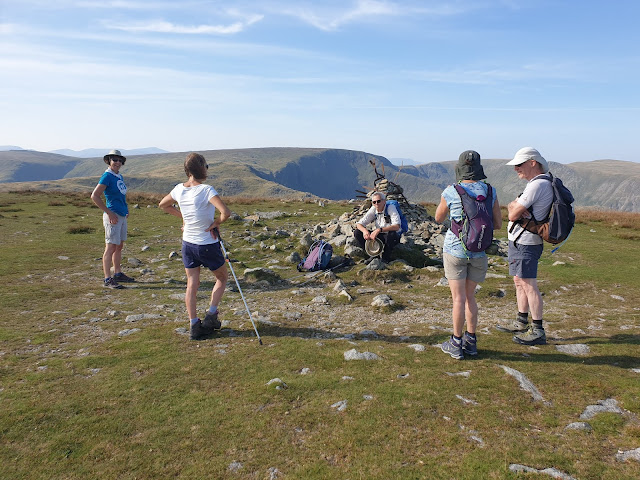 A little further on, the summit of Kentmere Pike offers some nice spots to 'park your bum' for those with declining energy levels. 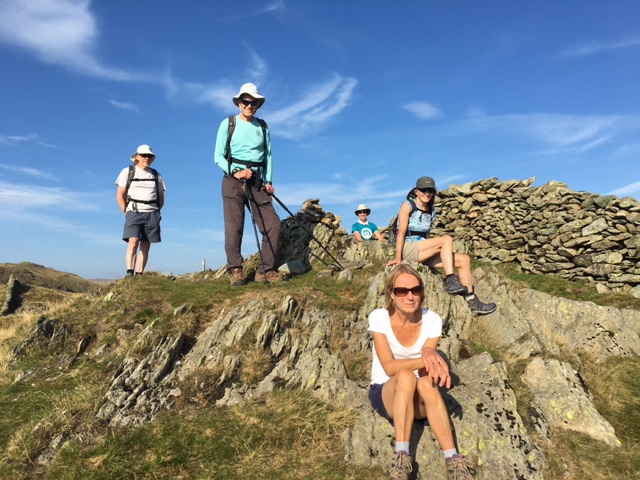 Eventually we reached the track that emerges from Stile End onto High Lane, where there are possible parking options, along which we marched towards Green Quarter, before taking a path through the trees to reach the road back to Staveley along which the cars were parked. 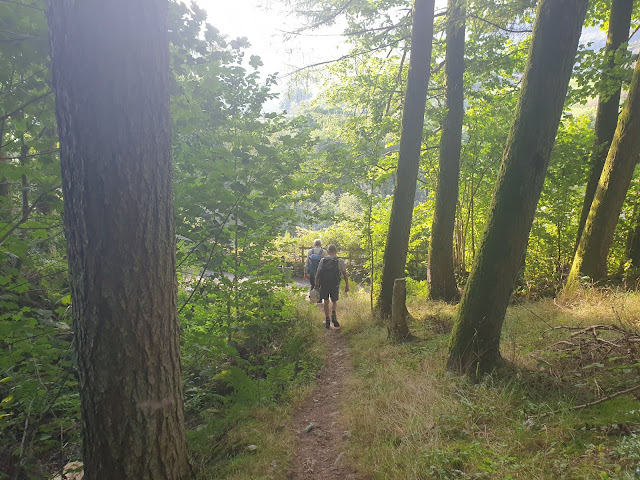 The misty look is due to the camera lens misting up on the humid day
The Watermill Inn at Ings provided welcome sustenance at the end of this energetic day's walking. 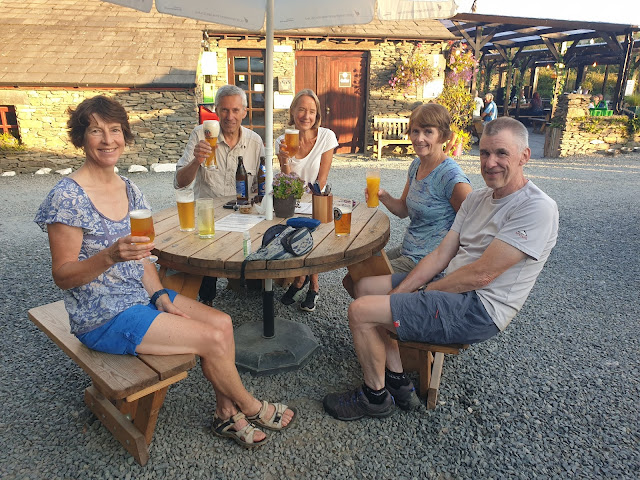 Well, that was all very jolly, and great to meet up after so long and still be able to partake in a fairly long day out. My Garmin clocked 26 km (16 miles) and 1200 metres ascent, in a little over 8 hours - including 1.5 hours of 'resting'. 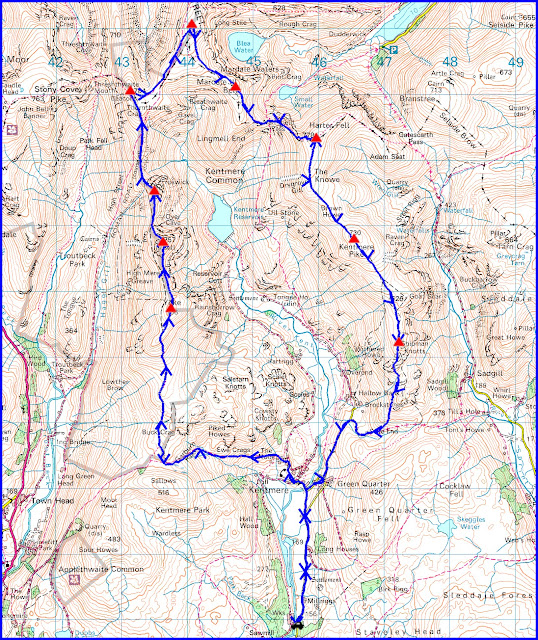 AWOL: Don's sunglasses and my orange cap that goes back to Nick's days as the Nike 'hat man' in Taiwan.
Thanks to David, and Sue, for some of the photos.
Posted by Phreerunner at 08:45

A splendid round. I ran round it a long time ago and an remember being totally done for. You did right to dawdle here and there. I am not rising to your peak naming challenge - as you may gather it is something I have never been all that good at.

You might have identified Ingleborough, if not Lochnagar, Conrad.
It really was an excellent walk, and I don't seem to have a record of having walked the eastern section beyond Nan Bield Pass before!