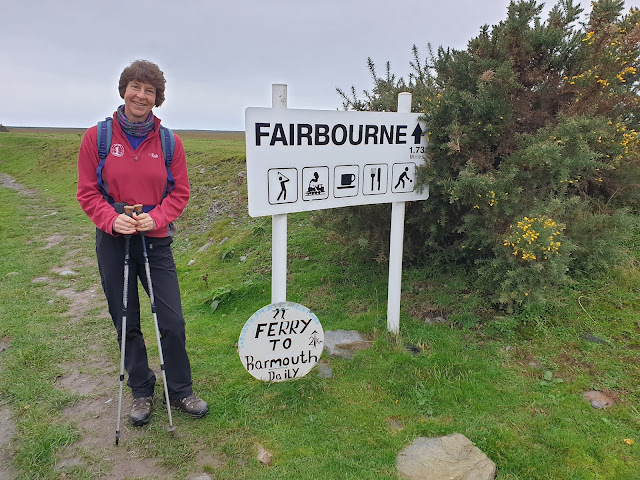 Today's walk with Sue brought back memories from 62 years ago. More of that later.

Having noted Conrad's (Sir Hugh) difficulties on little used paths, we are having a much easier time here, as we are following routes devised by Alex Kendall and published in his 'Snowdonia - Low-level and Easy Walks' guides. They are excellent, and have brought us to parts of Snowdonia not previously visited, on well researched paths.

Today's outing was up to the usual standard. The weather in Porthmadog was less than inviting - a thick mizzle under a 20 metre canopy of cloud. My overtrousers went on before we left the house. The weather was just the same when we arrived back later!

However, 50 minutes away at the station car park at Morfa Mawddach, the weather was fine, if a bit gloomy, so the overtrousers went back in my bag. We set off on an easy stroll to Fairbourne, advertised on a sign as being 1.73 miles away. (See above.)

The walk started on a good path beside a marshy area that appeared to be home to Little Egrets, gulls and ducks. There was a view across to Barmouth and the bridge across the estuary that is currently closed for refurbishment. 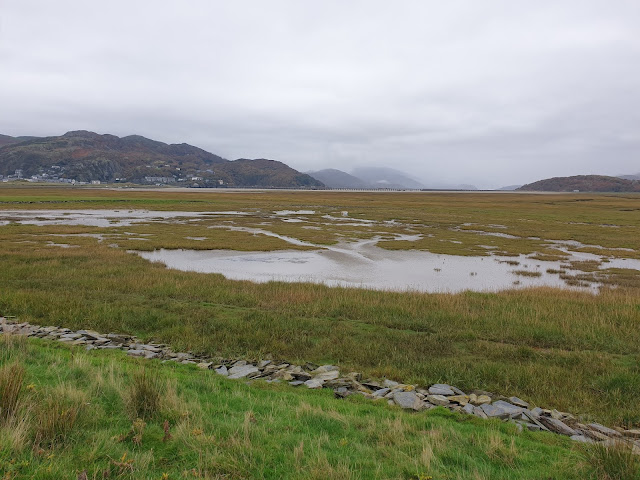 Then we enjoyed the lovely beach of firm sand next to which the small town of Fairbourne is protected by a sea wall. 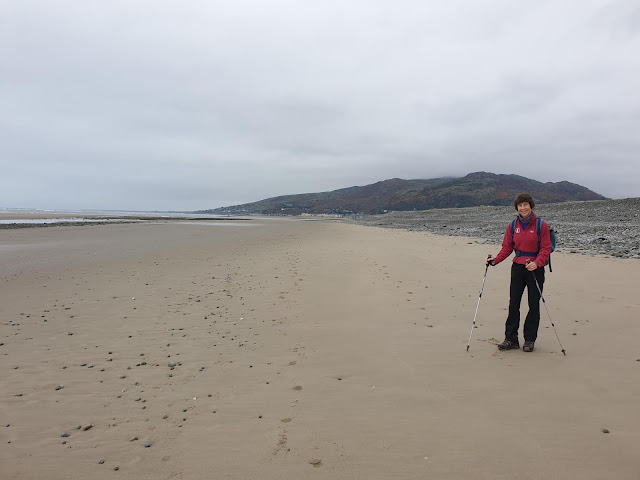 The sea wall is home to 'Dragon's Teeth and a gun station, WW2 defences when a Nazi invasion via Eire was a serious prospect. 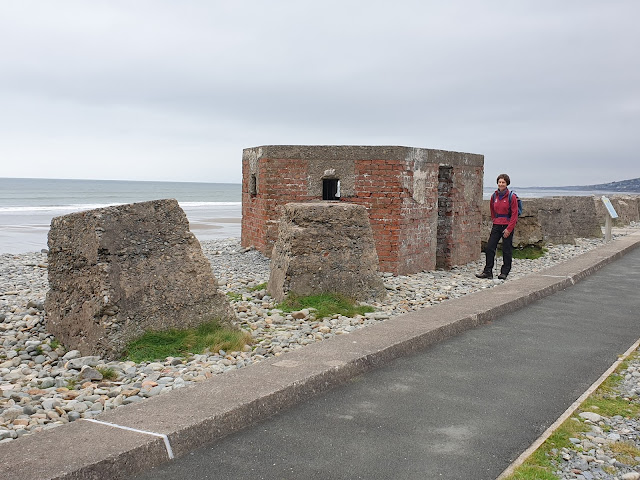 Beyond Fairbourne, the start of a steep ascent through woodland. A tea break up here was most welcome. 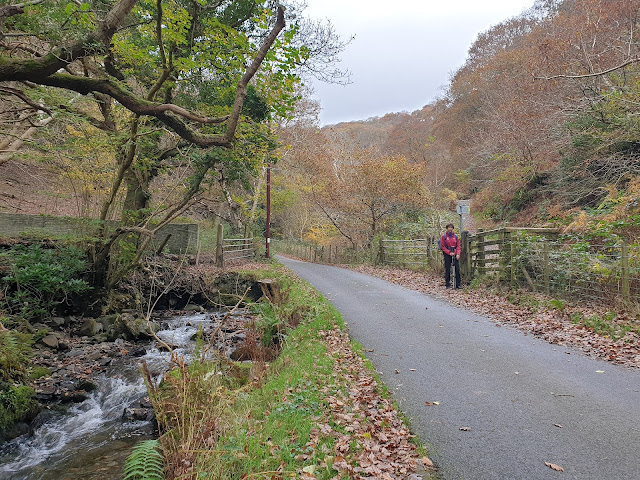 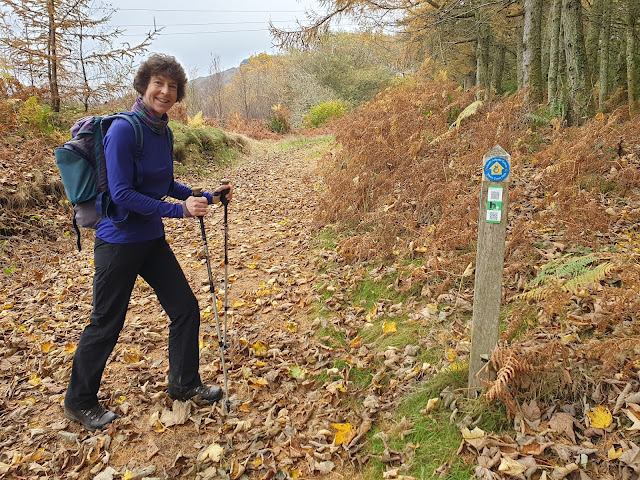 I came to the Blue Lake in 1959, on my first camping trip, with other juniors from the Albrighton school I attended. I don't remember that much about it; I think we spent most of the time in camp, lighting fires, enjoying sing-songs, etc. But I do retain a vivid memory of visiting the lake through a short tunnel and skimming bits of slate across the calm water. Sadly, the tunnel was closed in 2019 due to litter problems, so the lake now has to be viewed from above. 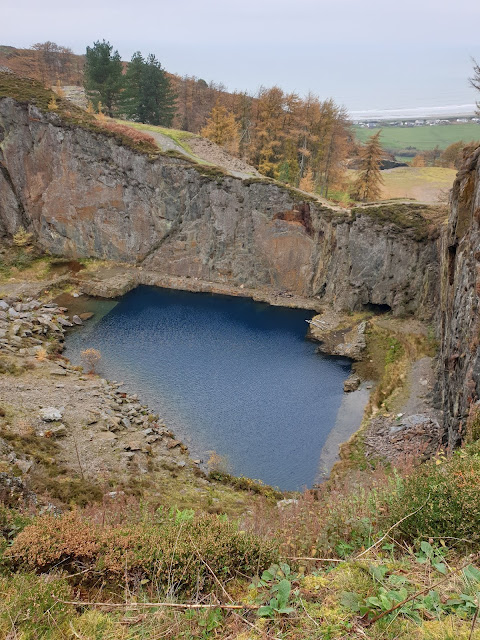 It's 'fungi' time of year. There was no skinny dipping in the copper sulphate flavoured lake, but we did spot this fine specimen of Buttock Fungus. 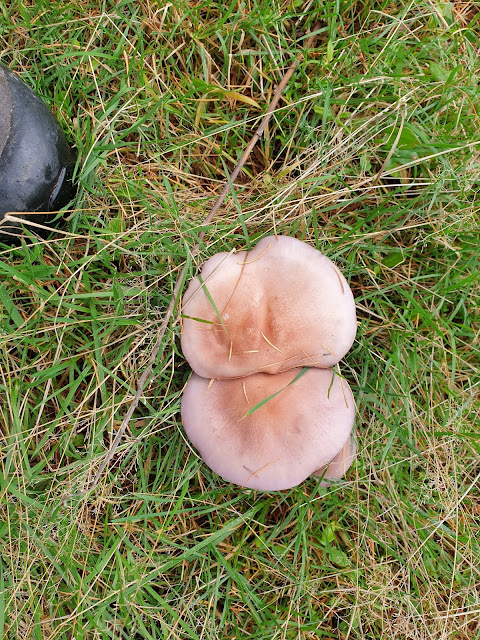 We rose gently to a height of around 360 metres, passing an isolated house at Cyfannedd-fawr. 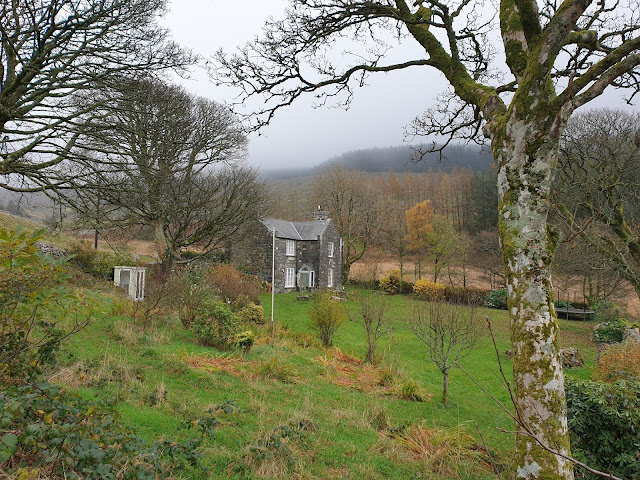 A large, four propeller military aircraft thundered over us just as we came across a plaque in memory of some 20 airmen who perished here in a Flying Fortress crash in 1945. 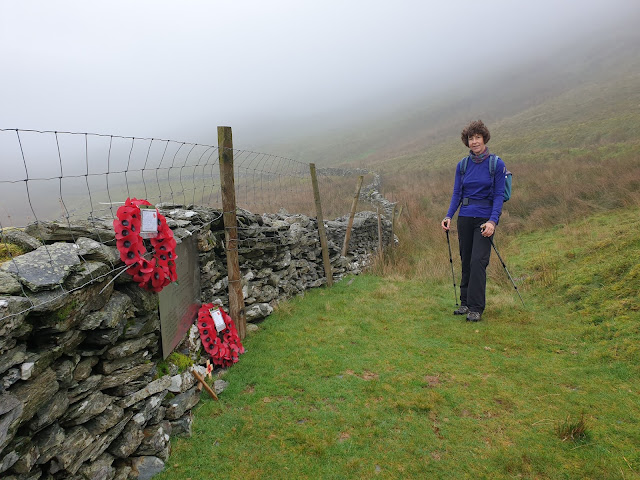 Lunch was taken on a grassy bank with views to the estuary and to neighbouring landmarks, limited due to the misty conditions. 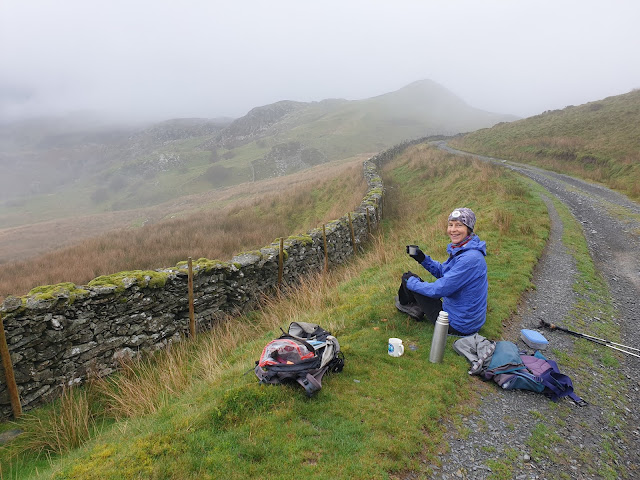 Continuing our circuit, we passed through a narrow valley with a series of crumbling walled enclosures that I imagine were once sheep pens. 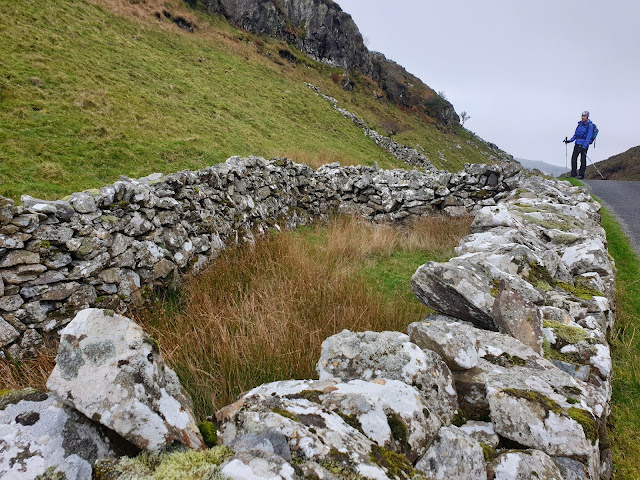 Further down the hillside, trees laden with small red berries. 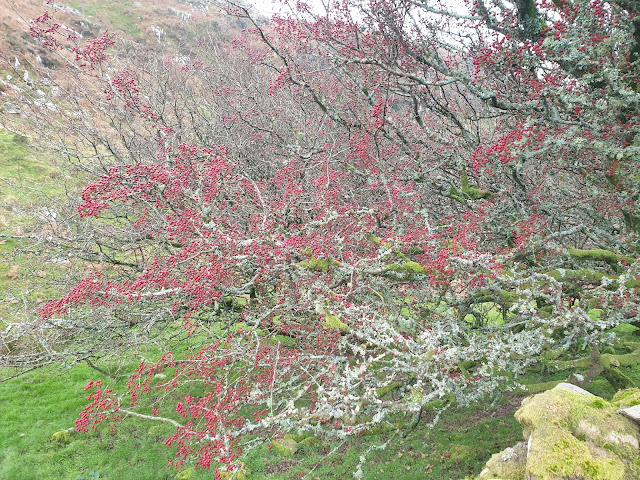 Farm equipment in a field - a fence post gadget?

On this section of the walk the stiles referred to by Alex have been replaced with fancy gates and yellow paint. 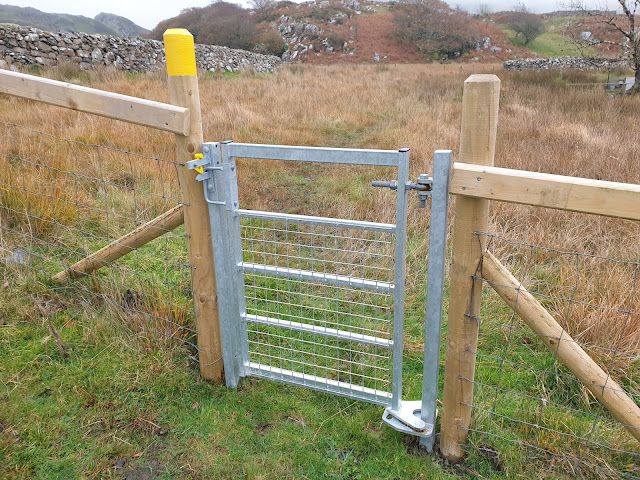 A pleasant descent through trees and past more fungi led to a steep and greasy path down to the A493 road, and a final path back to the car park, via a convenient bench where we finished our (full at last) flask of tea. 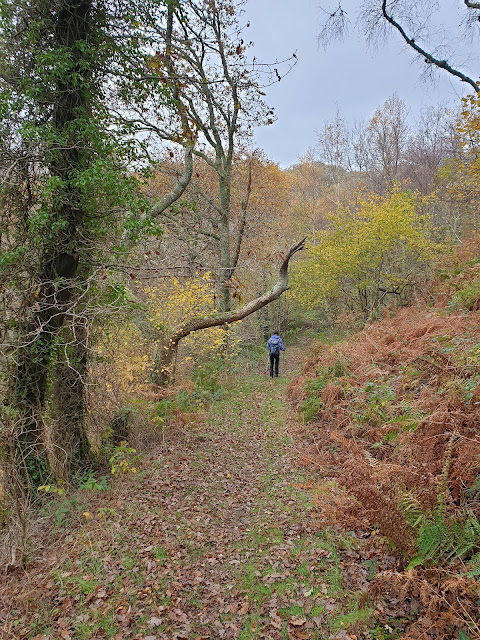 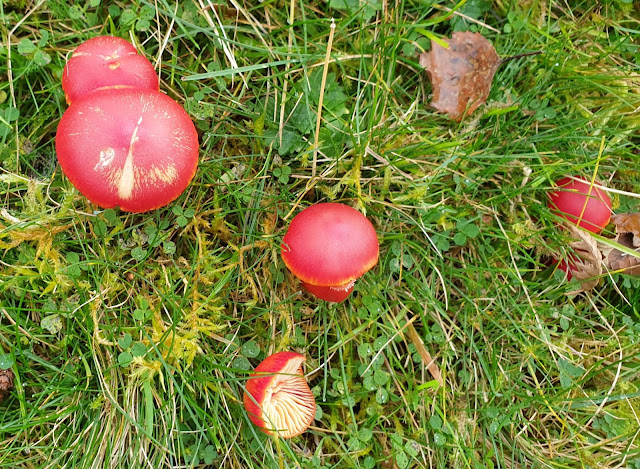 Our route is shown in blue below. It was about 14km, with 400 metres ascent, taking a little over four hours. Another fine outing. The only people we saw were a few folk in the beach area, and a shepherd fiddling with his sheep. 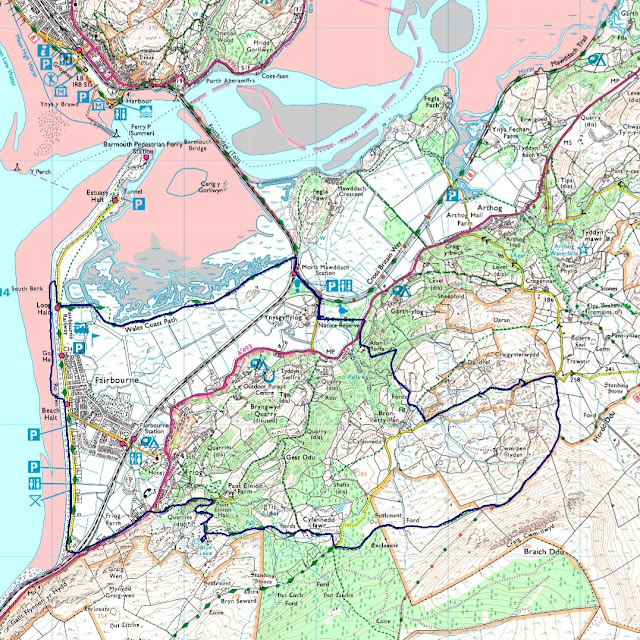 I know I moaned about obstructed paths and the like as you have mentioned but again as you say devising my own walks does provide a mild form of adventure. I suppose that is some sort of recompense for not doing multi-day walks at the moment. That yellow paint seems to be taking over. I can see us not being able to embark on one of our national LDPs without wearing, perhaps, a yellow hat or yellow armband in the future.

Thanks Conrad. I have a yellow hat. I'd better take care not to leave it on a gatepost!