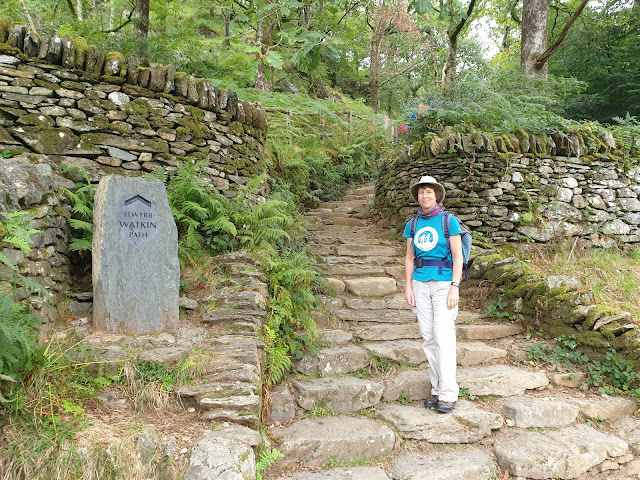 We started gently enough from outside the café in Bethania, taking the steps up the start of the Watkin Path.

After some pleasant woodland walking we reached open country and rose gently into Cwm Llan, passing small waterfalls after diverging away from the Watkin path, and rising to a good track that must have been a tramway from the nearby mine and quarry workings - there was a slate quarry here from the 1840s to the 1880s. 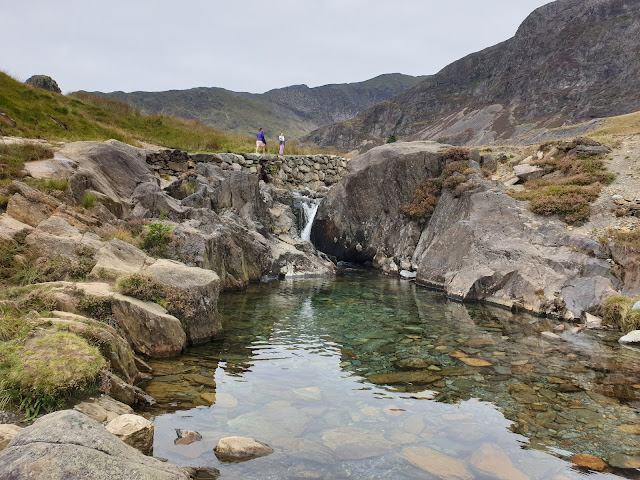 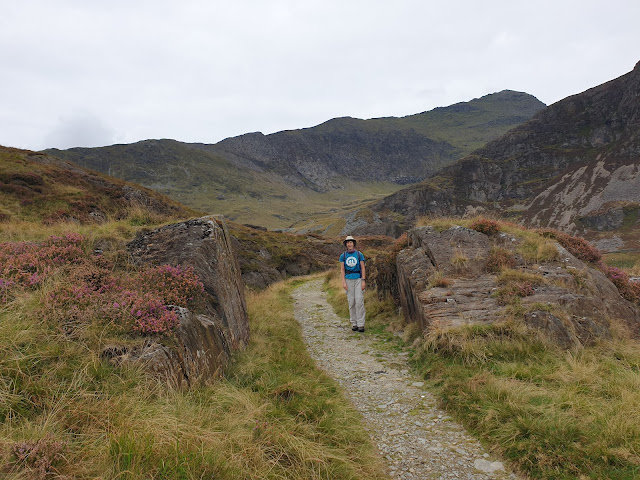 Somewhere along this pleasant track, Sue took it upon herself to misinterpret Alex's route guidance and head up a vague path towards Bwlch Cwm Llan. I explained that the route should be to Cwm Llan, not Bwlch Cwm Llan, but Sue studiously ignored that theory and blasted on up the hill, past a couple who had parked behind us, pausing only for two minutes silence at 11:55, in respect of QE11's funeral.
Once up at the col ('Bwlch'), Sue looked up at the ridge to Snowdon and announced - "We're going up there, Alex would approve of this minor diversion."
The route was clear, the wind was negligible, and there was just a smidge of mist on the summit. We'd seen just a handful of people. A quiet day on Snowdon ?! 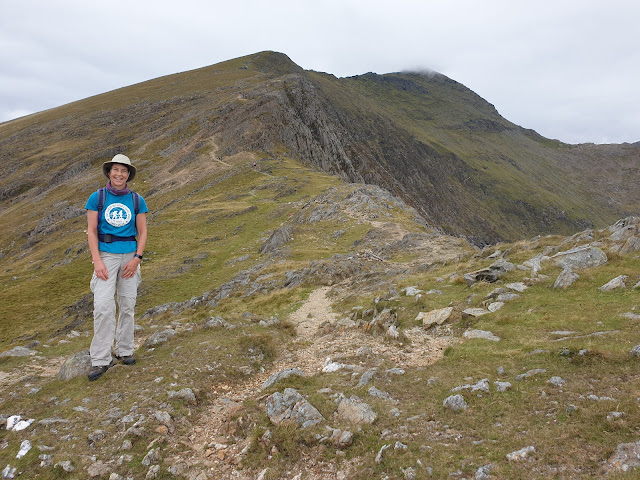 It turned out to be quite a long way to the summit, with increasing numbers of people. Actually, good to see loads of black, Asian and mixed race walkers in what used to be the domain of the white middle classes.
There was a queue to visit the summit, so we just went around the back and tapped the summit plinth rather than the trig point. We'd been there countless times, if not recently. 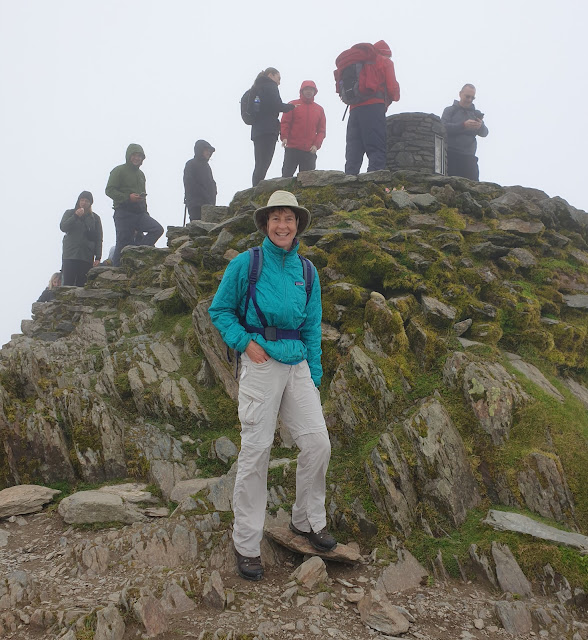 It took just a few minutes to descend from the misty summit and turn left down the steep start of the Watkin Path. The views to Moel Siabod and Y Lliwedd were excellent.
English Stonecrop was in flower here, with tormentil and ling/bell heather the commonest flowers lower down. 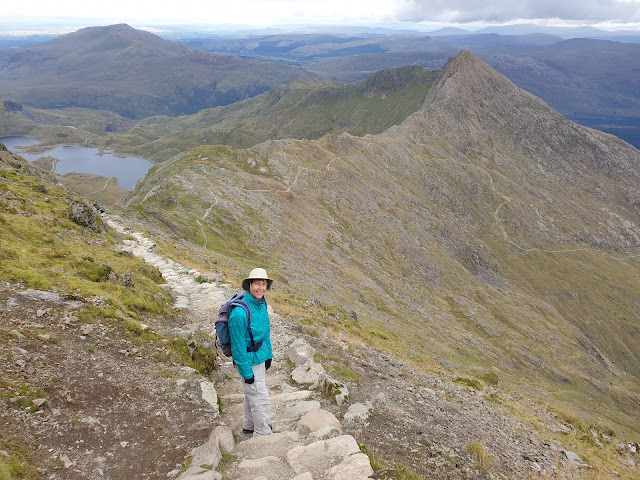 After the steep section we stopped for lunch on a grassy alp with fine views across to Crib Goch and the Miners and Pyg tracks.
Here's our view back up to the summit. Somewhere in the foreground may be the sheep that seemed to be stuck on a precarious ledge. 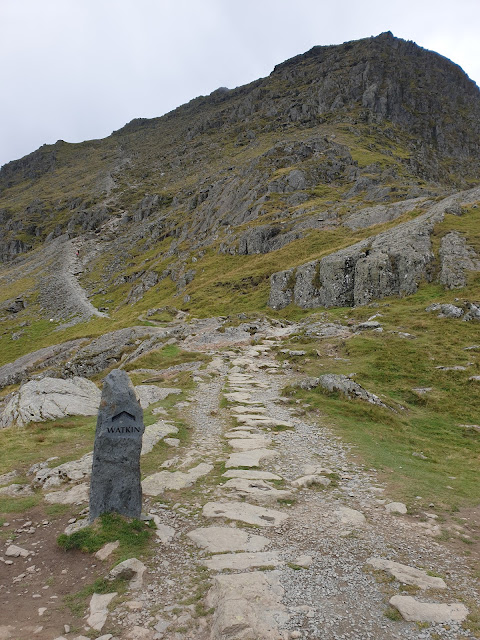 Crows flew overhead, caring and audibly swishing their wings. Countless novice hikers asked "how far?" and "How long?" to the summit. Men pranced in fancy costumes and sparkling new trainers. Wheatears flitted from rock to rock. Drizzle briefly led to a dose of waterproof clothing.
We continued on the Watkin path, eventually rejoining Alex's route around Cwm Llan, past rocks steeped in Maidenhair spleenwort.
Gladstone Rock was reached. 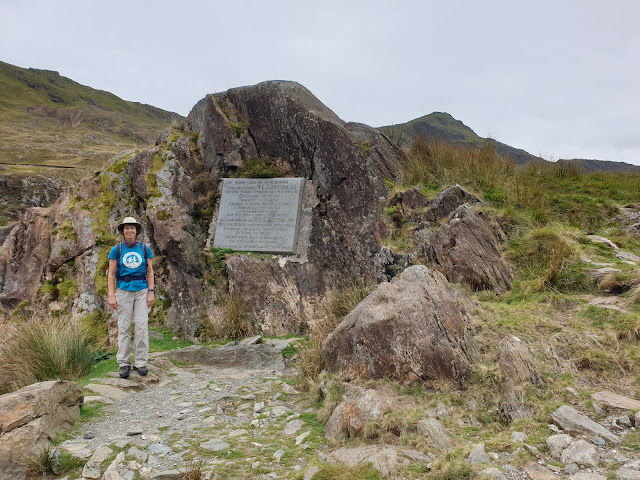 This is where, in 1892, the 83 year old Prime Minister, William Gladstone, came to open the Watkin Path, which had been built by his friend and fellow Liberal MP, Edward Watkin. Gladstone spoke on 'Justice for Wales' to a large crowd. Hymns were sung. Gladstone and others then attempted to climb to the summit. They were defeated by cloud.
Below Gladstone Rock, bathers were enjoying the pools in Afon Cwm Llan, which we crossed after leaving the Watkin path to follow our esteemed guide's route.
Shortly before reaching the car, we paused for a while for a delightful conversation with two German ladies.
The couple who had set off at the same time as us, and with whom we had had intermittent conversations on such matters as marathons and emergency shelters, arrived back at exactly the same time, after a 15km walk with 1100 metres ascent, over a period of 6 hours. Here's the route. 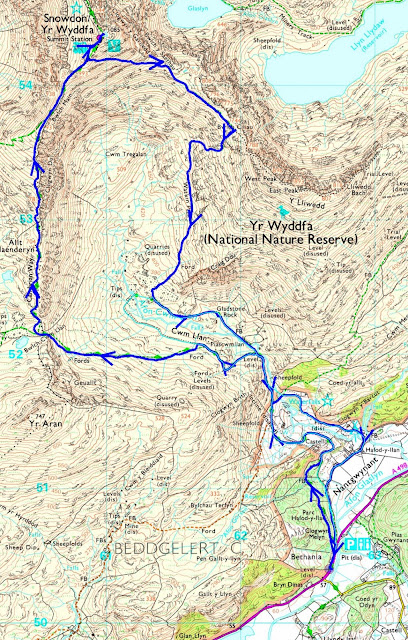 Then we went home.
Posted by Phreerunner at 22:24

The route as seen on the map looks like a classic. The photos support that. Well done Sue, aka Mountain Leader;I guess there was deliberation in your departure from the route.

Yes Conrad, a classic route with only a brief encounter with Snowdon's crowds. Easy to understand why Mountain Rescue are called out so often! Some poetic licence in the report....