Actual: 28km, 748 metres ascent
As planned, except for a pleasant diversion along the Badenoch Way, and a continuation for 6 km into tomorrow's route.
Time 9 hours including 2 hours stops.
No of new Challengers seen: 10
No of Challengers seen who started from 3 different places: 0
No of other Challengers seen: 0

The food parcel was duly released by the lady of the camp site, after much bargaining, for the princely sum of £3. This covered storage for a month and our fee for the night's camping.
'You are walking all across Scotland' she said, 'I can't possibly charge you!'
Her recommendation for a meal was The Newtonmore Grill, a transport café just down the road. It proved excellent, with the steak pie crammed full of succulent meat.
We were lulled to sleep by the quack of the camp ducks and the asthmatic hum of an RV generator.

Today it dawned bright and clear. A leisurely start after Sue's foot repairs saw us strolling down Newtonmore high street in the sun by 8.20, past the Glen Hotel which looked ok, but if its food is of the same standard as its hanging baskets it may taste a bit plasticy.
Crocs were again deployed in my case, for the first 15 km today. I've now done about 50 km of the walk in them and the soles are now almost completely smooth. They are exceedingly comfy - it's like walking in carpet slippers!
Little and Large appeared in front of us. It was Tim and Kate Wood, on their 10th Challenge, fresh from the pleasures of the Watsons' B+B. We finished up walking with Tim and Kate all day. They may be in their 70s but they were carrying heavier loads than us (Tim carries 36 pounds) and are extremely fit.
Striding towards us as we entered Kingussie was Les Ellis, another seasoned Challenger, who proudly informed us that he had now started from all 12 permitted points. (The Mad Austrian will only need about 4 years to achieve that!) 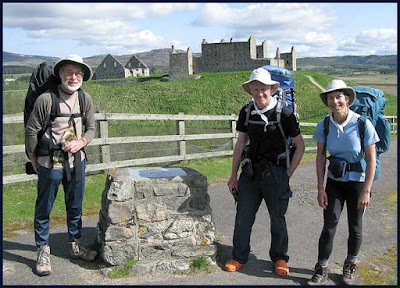 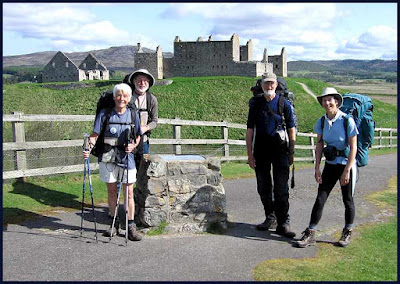 Les stayed with us for our jaunt past the Barracks (lots of photos were taken) and along the scenic pleasures of the Badenoch Way, with lots of bird watchers in evidence. Hmmm, it's an RSPB reserve. We were entertained by trilling curlews and laughing lapwings and an out of rhyme buzzard, mewing... 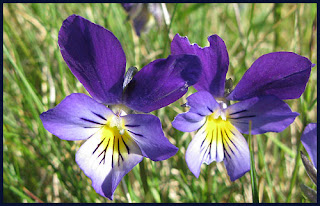 The birds were too fast for me, but these Wild Pansies stayed still for a moment

Amongst all this was a chocolate caramel shortbread (CCS) stop, pictured. It went down well today. 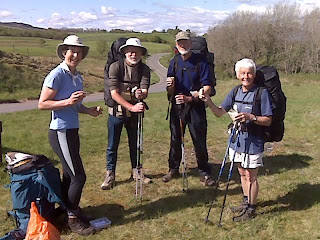 Joined briefly by Jean Smith and Chris Kitt, then by Derek and Pat Hopkins, all on their first Challenges, we ambled along to Baileguish. 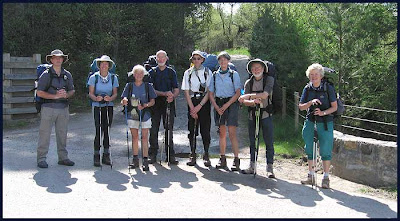 During the morning we discovered that Mark Alvarez, a fellow blogger, and his US compatriots, the Le Borwits, had sadly dropped out. A great shame, condolences to all of them.

Tim, Kate, Sue and I pressed on to an idyllic lunch spot. With micro-ticks in residence. Luckily my eyesight is poor, so (officially) I am still 'a tick free zone'. 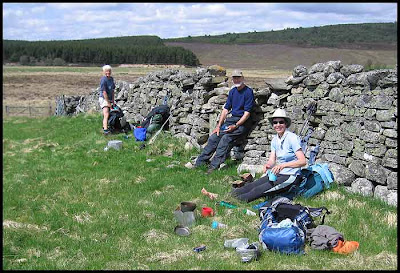 We took a route through forest which half way through was blocked off for forestry work. If they had indicated that earlier we'd have gone a different way. Anyway, we muscled our way through, past an old discarded hat. The rubbish people leave around - terrible!

Health + Safety warnings on the bridge at Carnachuin warned of the possible terrible consequences of crossing it. We ignored the suggested 5 km diversion and strolled uneventfully across. 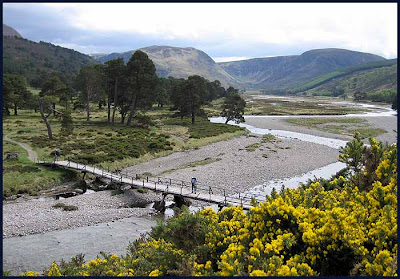 Two huge nipple free bosoms protruded above a log outside Ruigh-aiteachain Bothy.
Wow.
As we approached they revolved in unison.
'Hello' said the two bald Bobs.
'Have you seen my hat?' said one.
Oops - Tim and I exchanged glances - knowing we should have picked up the old hat in the forest.
'It was only an old one' said Bob, but I've lost my bandana as well, and my head's hot.'
'There's a bucket of water over there' said the other Bob.
'But that's for the toilet!' complained Bob. 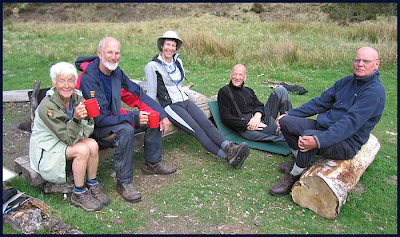 Bob Fyfe and Bob Forbes were doing the Challenge for the first time, guided by their more experienced friend, Jeanette Tennant, who had dropped out with blisters - she was one of those tales of woe related to us yesterday by Linda at the pottery. They should make it though, and they had chopped lots of wood to keep them warm tonight. 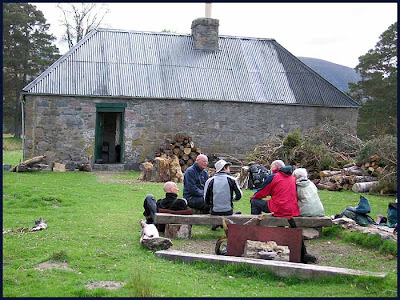 We noted the last entry in the Bothy Book, from John Jocys, also from Altrincham, who we are taking home next week. He likes this bothy.

After an hour in the good company of The Two Bobs, with CCS all round and a supply left for The Mad and Hungry Austrian, the four of us ambled on up the glen just as another Challenger arrived at the bothy.

The landslide about which many warnings had been issued had a nice path across it, and we progressed easily for another 6 km up the glen, to join Derek and Pat at an excellent and roomy camping spot with a good 'tap' at NN 882 890. 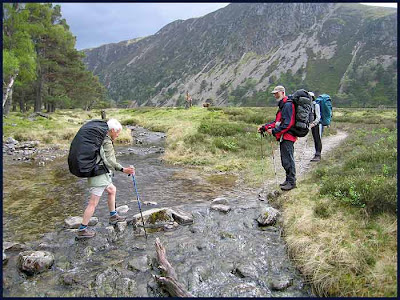 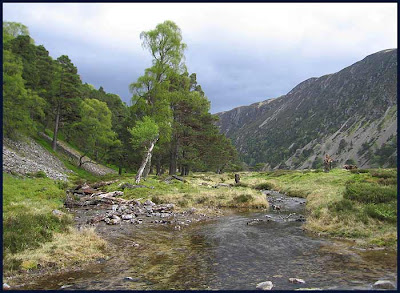 We were well ensconced in our tents by the time the light rain started, and even that relented whilst I went out to fry the crispy noodles (hot fat everywhere!) to go with our chow mein.
Disappointment of the day was that of Tim and Kate. It seems Cameron McNeish has been following them around with a TV camera and a dolly bird from the beeb, even at one point filming their feet. T + K have got used to this celebrity lifestyle and were devastated that Cameron had deserted them today, despite his promises.

There don't appear to be any midges or ticks here. Just a plague of slugs!

Next day: Day 9
Plan
Report
Back to Index