We set off at 8.40 after a fine breakfast prepared by Val. 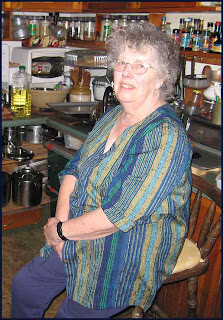 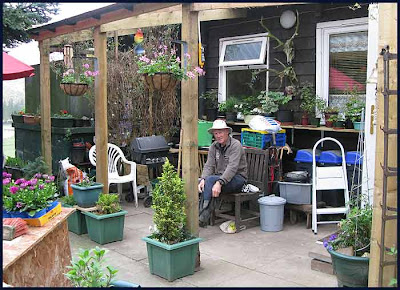 With us were our new found friends, Dave, Susan and Roy, with whom we walked all day. Tom Hume and his friend Gordon had arrived late last night and breakfasted with us then lingered behind. Tom is on his 10th Challenge - an old hand. 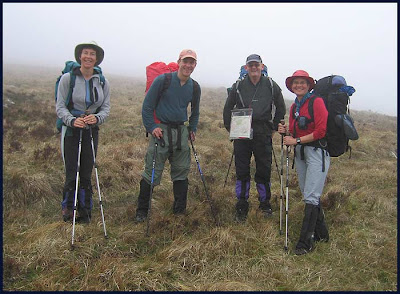 After a misty start the skies soon cleared to produce a lovely sunny day. 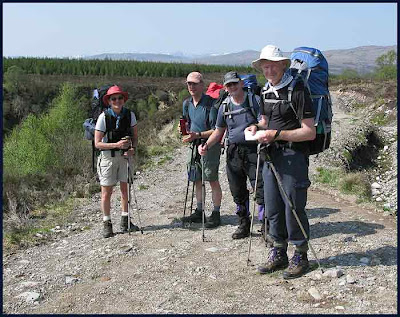 On joining a track by some pylons we lingered for a brew whilst admiring the snow adorned hills east of Cluanie. 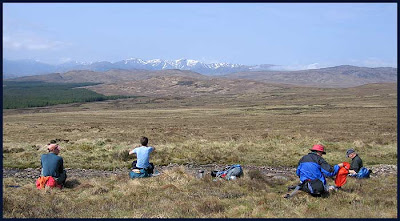 Later we lunched at a track junction beyond Dundreggan. We were so absorbed by the fine views back west and the stimulating conversation that we failed to check where we were. Setting off in the wrong direction, we soon chanced upon some pylons.
'Should those be there?' Dave and I pondered.
Dave's GPS gave us the answer - we were on the wrong path about 1 km north of where we should be. But we were on a path.
Nevertheless we headed off on a cross country route in search of our correct location. This was particularly annoying for me as I had to change back from crocs to boots.
Soon we noticed the track - it was actually mimicking our boggy cross country route, just a few metres away.
We followed it.
Nice one!
The newish track, not marked on the map, soon rejoined our planned route, cutting over 2 km off our planned day in the process! Lucky! 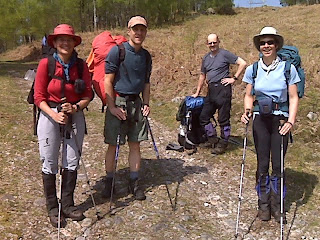 The sun continued to shine, and gorse, broom, primroses and violets lined the hedgerows as we reached Fort Augustus and strolled into the excellent camp site at 4.45.
A convivial period of installing tents etc followed, with yoga featuring on the agenda.
After a while Marcus Petter, the Challenge's Austrian contingent, strolled in. 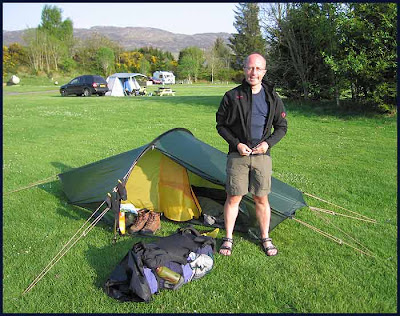 Marcus, you may recall, started from Applecross, not an official starting point. He related his progress to date. After two days he had reached his official starting point, Strathcarron. Going beyond there, on the third day, he felt unwell. He decided to self rescue and stumbled back past the Falls of Glomach to Morvich to safety. At the start of his 4th day he found himself tucking in to breakfast at the Kintail Lodge Hotel, where we had started from three days earlier.
He must have cut a forlorn if not puzzling sight.
The Austrian Challenger who started three times, from two official starting points.
He must also have recovered his health, as he arrived in Fort Augustus only two days later.

Then we were visited by another Challenger - number 279. 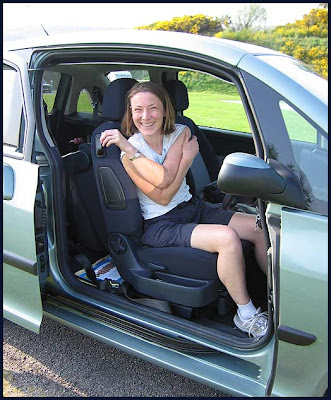 This was our old friend Heather T-S.

I thought about reporting her arrival to TGO Control, but decided that as she had arrived in a Peugeot with sliding doors I would not blow her cover.

Anyway we all went to The Bothy for a meal and a beer.

Very nice it was, too.

But that didn't leave much time for blogging!

Next day: Day 6
Plan
Report
Back to Index

Give Dave our regards and ask him to show you a few turns!! Bob and Rose