Actual: 20km, 1320 metres ascent
As planned, except that we ascended Sgurr nan Ceathreamhnan by tomorrow's 795 metre col in preference to the 875 metre col, to which there was no obvious path. That added about 1 km and 100 m ascent to our planned day.
Time 8 hours 55 mins including 2 hours 25 mins stops.
No of Challengers seen: 0
No of SYHA wardens looking for Cameron McNeish: 1

Last night we did our best to fill our massive room with steaming laundry, but to be honest the last couple of days hadn't really stretched our wardrobes.

More of a problem was how to keep our fresh supplies of CCS, retrieved from the sanctity of Cluanie Inn's wine cellar, cool. 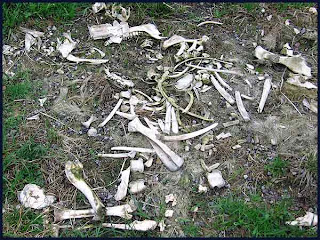 The timing of the hotel breakfast dictated a lie in, so we were extremely well fed and well rested, with much lighter pockets, by the time we left at 9am to trudge past some dessicated road kill up the surprisingly unboggy path to Alltbeithe SYHA and our first scheduled CCS point. 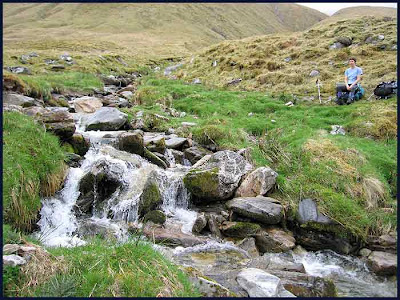 But would there be anyone with whom to share the Chocolate Caramel Shortbread?

A few messages before I continue, as it's hard enough to make these entries, let alone respond to comments:
Thank you for your comments, Aktoman and Theo. Yes Theo, we had a most pleasurable and sociable evening on Thursday at Kintail Lodge, and we really were heading east and the other lemmings were clearly heading for the wrong cliffs!
But as you can see from today's header, we have erred ourselves, having progressed all of 300 metres east in nearly 20 km of walking! Scary, at that rate this could take all year!
To Two Yards of Lard (great blog BTW), yes the Pyrenees are wonderful - we could tell you more if you care to join us on Tuesday 27 May - see the evenings link on topwalks.com.

Back to today (or whatever day in the past this is before anyone reads it...)

We lingered at Cluanie to send a message to WD, wondering how he was faring this year. Was he testing a 'Spot' gadget? Had he tested it yet? We told him it was raining, but by the time we got outside it had stopped.
T-shirts were duly deployed for the stroll to Alltbeithe, passing swallows, deer (live and road kill), wagtails, cuckoos, pipits, tadpoles, crows, a vole, wheatears, dog violets, wood anemone, lazy butterwort (ie not in flower), lesser celandine, and more.
I wished I had my copy of Hostile Habitats on board (excluded due to weight restrictions) - but that would probably have made this entry even more boring.

Just before Alltbeithe we met a couple of chaps, first humans of the day, who told us the mountain weather forecast gave an 80% chance of the Munros being clear. So they were heading up in the hope that the cloud would lift above its current level of 400 metres. 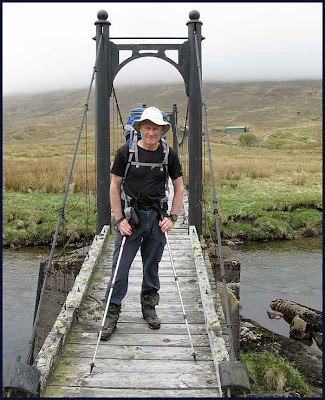 The bridge to Alltbeithe SYHA (in the background)

We spent an hour in the hostel with Steve, the warden. He had seen many TGOCers but thought we would be the last through his patch this year. So no takers for the CCS (except Steve), so we now have a CCS mountain!

Where WAS Mike the Knipe??

Steve seemed quite upset and concerned that Cameron is not doing the Challenge this year, and asked us to pass on his message to Mr McNeish - 'There's a pot of tea waiting for you at Alltbeithe next year'. (That's if Steve doesn't do the Challenge himself.)

We continued on from the ecological, conservationist miracle that masquerades as an SYHA hostel, up a good path to the cloud at 400 metres. Steve had jested when he saw that we were determined to stick to our planned route into the clag - 'You never know, you might get an inversion.' Some hope, we thought.

Mackerel fillets in a hot (should read 'tasty') chilli dressing, and almost inedible 'School Bars', bought because they seemed too good to be true at the Outdoors Show, helped speed us on our way to the planned camping spot.

I'd never been here before, but the map had done its job and produced a choice of flat pitches in the heather with the sound of running water nearby. With visibility down to 10 metres we couldn't see the latter.

So the tent went up and off we went to bag a new Munro for Sue. It was only 2.30 so we had to do something, despite not being able to see much beyond our noses. Would we ever find the tent again?

After going to the wrong col - which was really the right col - and deploying full waterproofs to combat the wet mist, we got up to about 1000 metres when the sky brightened. Eureka, Steve's hunch had been right and we suddenly popped out of the mist. The top 100 metres of our hill, Sgurr nan Ceathreamhnan, was bathed in sunshine. 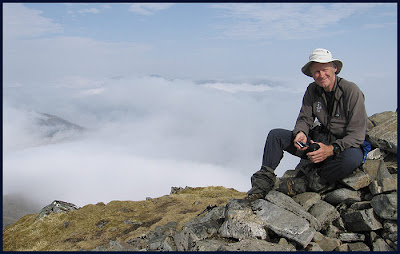 A few distant peaks poked out of the cloud, including Carn Eige, but not the hills to the south of Alltbeithe that the lads we met this morning were climbing. There were 10 people on top when we arrived, huddled above the sea of cloud as if marooned on a small island. It was calm and warm. There was a trace of Orange, so I tried valiantly to post the picture attached here. 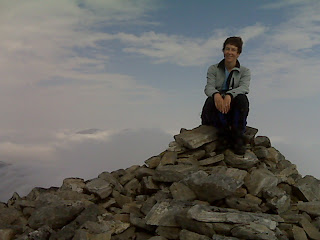 But it was not to be. The 30 minutes we spent up there was however most enjoyable. 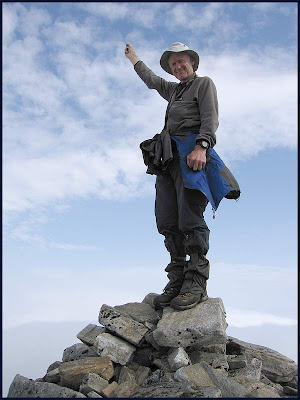 Blogger with arms not quite long enough. Must take a 'blogging pole' next time?

Eventually we strolled back down into the cloud and fumbled our way into camp around 6 pm, leaving plenty of time for a leisurely evening and more verbal diarrhoea from yours truly. 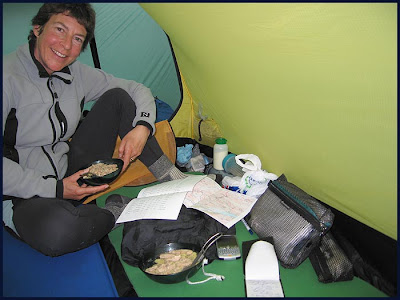 Next day: Day 4
Plan
Report
Back to Index

Darren still alive (Monday). He tried phoning me, but I was in a class. Texted him back, but no response yet.

His posts from Friday (Day 1) only just arrived on his blog. Orange must have better signal capability than Three - or you're on a higher route.

Ken Knight's posted from Fort Augustus. Cameron's got a video up of the start of the Challenge.

Watch out for ticks, Robin picked up 5-15 in a few days in Cairngorm NP last week. They must be gathering for the annual Challenge migration ;-)