Actual: 25km, 1328 metres ascent
As planned, except for a two sides of a square incident at Affric Lodge.
Time 10 hours 05 mins including 1 hour 50 mins stops.
No of Challengers seen: 3
No of Munro Baggers: 2 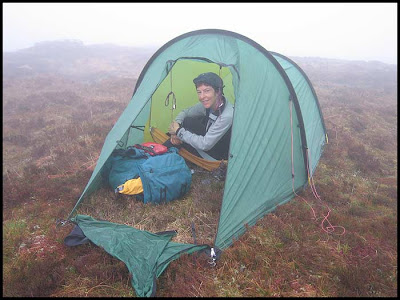 Camping in Coire na Cloiche
As we strode along the ridge in bright sunshine above a sea of cloud it seemed strange that we'd woken to 5 metres visibility, in a wet cloud.

The chink of the walking poles, the crunch of the schist, the rush of the wind, and the rhythmic creak of Sue's rucksack. These were the sounds that accompanied us over the heights north of Glen Affric, as we watched the clouds spilling over the ridge ahead whilst we descended steeply from our first Munro summit of the day, An Socach. 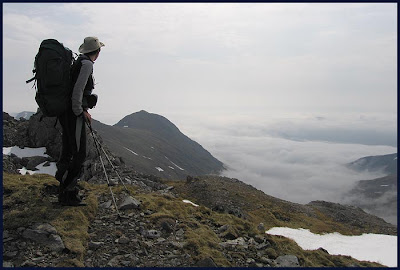 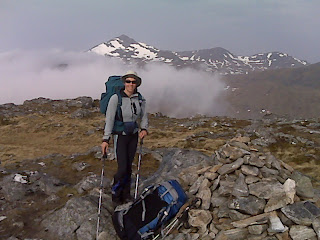 Our first humanoid contact of the day was with Weird Darren, after whose progress we had been enquiring. His message to us was short and to the point:

...He obviously hasn't been issued with one of those 'Spot' gadgets. 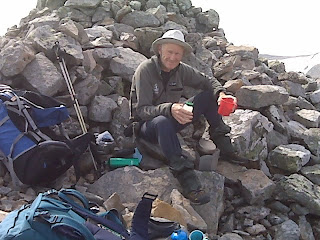 First brew stop, beyond An Socach

We soon encountered a 'bagger', then another one, John from Bournemouth, who has 54 Munros to 'compleat his round'. It has taken him 38 years to get that far. Apparently someone in the hostel last night had done them all in 4 months!

Now Notchy sent us a message. He was trying to impress us with his efforts to get fit.
'At top of Canisp' he bragged.
'At top of Mam Sodhail' we replied, 'much higher than you - so keep trying'.

We chatted to John at length here whilst I stood aloft the massive summit cairn waving this gadget in an effort to dispatch yesterday's 'news from the Challenge'. 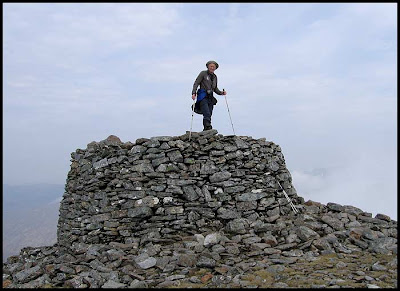 'Will anyone read it?' 'Why does the Orange network work to within two metres above this summit and no lower?' are thoughts that crossed my mind.

We strolled over to Carn Eige with John, a lovely chap, before wishing him well and hastening back past a flock of golden plovers to recover our sacks from a col high above Glen Affric. 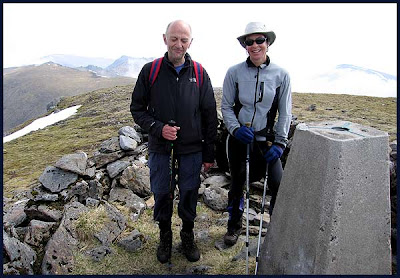 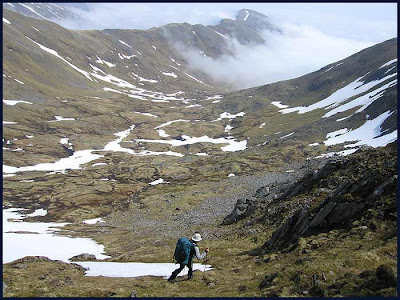 The col was fringed with steep snow, which we gingerly skirted around before gaining a path/stream (it can't decide) which led us to an excellent lunch spot.

Here at 980 metres we were above a sea of thick cloud, but as we descended into Affric we found ourselves enjoying a sunny afternoon in the valley amongst ancient pines. 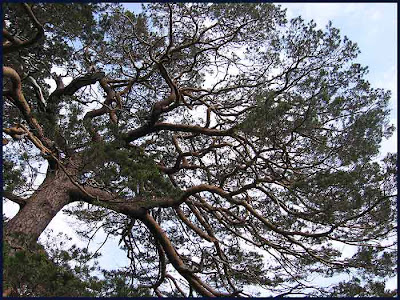 At Affric Lodge our carefully crafted blue line on the map took us over a bridge to the south side and onto the track to Cougie. Our way was barred by a man:
'There is no path that way - you must walk down to the car park and back up the other side'.
An extra 3 km to cover a few 100 metres.
Relenting a little, the man suggested an alternative. This resulted in us going to NH 209 228 and then bog and heather bashing south to join the track to Cougie. 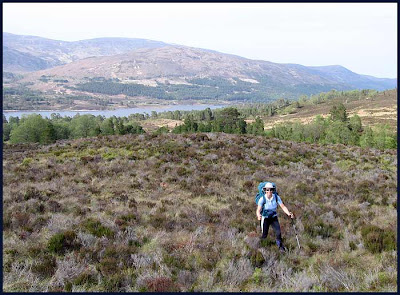 This was very tiresome - hot, sweaty, boggy, unpleasant tramping, with an uncharted deer fence to climb over to gain the path that's by a lake that isn't on the map (Andy Howell had warned of this), and the gentle stroll in to Cougie past new birch saplings and banks of primroses to complete the day's walk by 6.15.

We were soon installed with a pot of tea and goodies with what we had been reliably informed was Val's customary hospitality to Challengers.

We knew from 'Jungle Drums' that two Americans and a Brummie would be there, and we enjoyed a lovely evening with Susan, Roy and Dave, bloating ourselves with Val's tasty soup, fish pie, curry, and apple strudel and ice cream.

And an added bonus.

We knew Denis Pidgeon had ordered some beer, but we naturally assumed that he and his cronies would have drunk it all. But it seems they didn't. I'd like to think they had deliberately left it for us, but...

Anyway, it was beautifully cold Tennants lager from the fridge, and we drank it.

Next day: Day 5
Plan
Report
Back to Index