Actual: 26km, 1283 metres ascent
As planned, except for minor variation out of Fort Augustus, and we stopped at nice camping spot (see photo) 3 km short of Garva Bridge.
Time 9 hours 20 mins including 1 hour 55 mins stops.
No of new Challengers seen: 1
No of golden eagles: 1
No of idyllic camp sites: 1
No of ticks: 1 (Sue - easily removed)

My apologies for curtailing yesterday's entry - a night in the pub was to blame.

Now, enjoying a lovely evening by the River Spey, I can add a bit about Cougie that was intended for yesterday.

As we left Cougie yesterday morning, waved off by Val, the sadly recently widowed matriarch of a big family, we looked back to what appeared to be a small village, with residencies and chalets littering the area. We'd arrived the day before to see ponies in the fields, pigs in pens, rabbits in hutches, a rooster high in a tree next to the house, on the open front door of which a swallow was perched, watching a group of Challengers tuck into hard earned tea and biscuits. Birds pecked at plentiful food, cats cuddled and dogs wagged.
An armadillo lazed unseen in an airing cupboard.
These are all Val's family, together with her 8 children and many grandchildren, and she is proud to be expecting her 10th great grandchild! What a woman!

Anyone not up by 7.30 today would have been woken by Roy's Wonderful Whistling Kettle.
A kettle that doubles as a fire alarm!

The cloud was down as, leaving such noises behind, we left Fort Augustus accompanied by a heron, and hedgerows with bluebells, stitchwort, vetches, red campion, ramsons and plantains, to name but a few.

Heading up the Ancient Monument that is General Wade's Military Road, we passed a huge pink mansion and lots of pheasants and spent cartridges.

It was a dour trudge up the track to the Corrieyairack Pass, but the lingering mist kept us pleasantly cool.

After a welcome brew with stonechats we did reach a home. It was 11.15 and Mark Storey, Challenger 270, was having a lie in.

Some CCS got him going - fortuitously he was at a CCS distribution point! 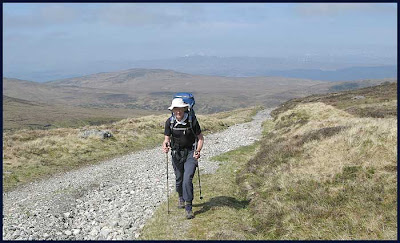 The cloud now cleared to reveal a fabulous day with extensive views. The two Corbetts were well worth the climb and a soaring eagle completed the picture. (Not quite - there were some ugly construction works to the north.) 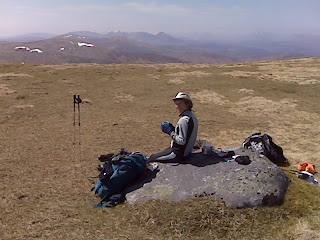 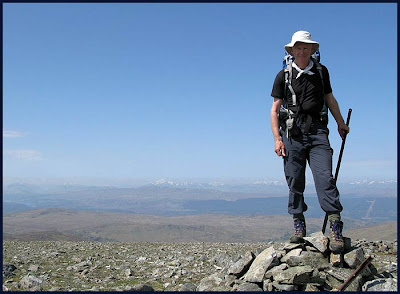 Views back along our route, south to Ben Nevis, and east to the edge of the Cairngorms - were wonderful. 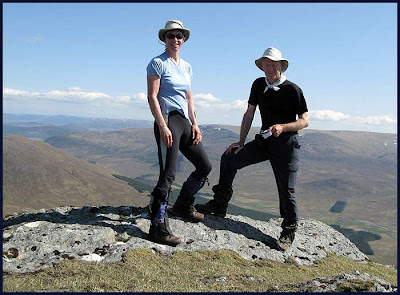 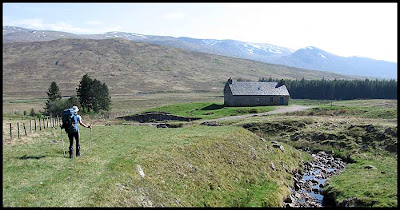 Then a steep descent to Melgarve, where many TGOCers have recorded their passage over the last couple of days, and an early evening stroll to this idyllic spot with lots of deer in attendance (hope they haven't brought their ticks!). 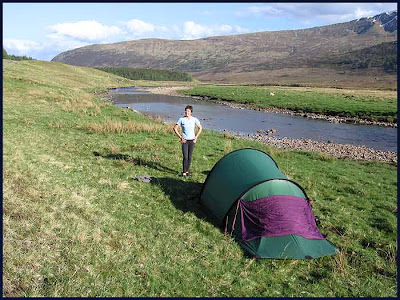 Later, Tom and Gordon passed, followed by the camera shy Austrian, Markus.
Thanks Duncan (Aktoman) for your comments - much appreciated.
Congratulations to Notchy, who today managed to scale Ben More Assynt.
Commiserations to Heather T-S who is here but unable to join in, and very envious of us - it seems David Albon has been keeping her informed of our progress.
My excuse for ending now is a weak battery, and there is no signal here, so who knows when this will transmit.

Next day: Day 7
Plan
Report
Back to Index
Posted by Phreerunner at 12:09

Greetings from sunny Holland. Looks like a(nother) wonderful crossing and I'm enjoying reading the blog. Just noticed you've got out of sync with your dates - Wednesday was 14th May - blame it on the weak battery?