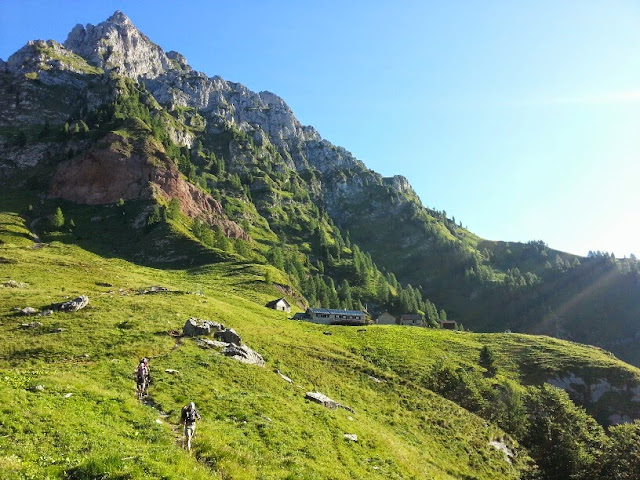 A blue sky morning for our final section and the refuge was bathed in sunshine. Antonio refilled the bread basket as soon as it was empty, and the coffee pot too!

We got going at 7.45, soon looking back to the scene pictured above, before descending 300 metres through beech woods, then re-ascending a similar amount over crisp beech leaves through sun dappled woods to Forcella la Varetta. The path from there was a mule track, high above the narrow valley, and against the limestone we found the first Edelweiss of the trip as well as a proliferation of saxifrages amongst a fabulous selection of alpine plants. The umbellifers lining the path were huge. Orange lilies lay amongst them, somewhat dwarfed!

Then, a steep descent and a cyclamen littered woodland section where, in the clearings, butterflies were enjoying the warm sunshine.

A refuge at 1250 metres (Rifugio Furio Bianchet) provided cappuccino and chocolate-orange cake in the sunshine, before our final 800 metre descent. Mostly on an unsurfaced track, it wound gradually down to the valley floor. Some dark red helleborines were found, and there were lots of insects with black spotted wings. Four jovial Italian ladies on their way up to Bianchet stopped for a chat.

The last section was a steep path that crossed a bridge over a deep gorge, La Pissa, dropping us neatly onto a road at 12.15. We had time for a quick lunch of two-day old sandwiches, before our taxi arrived at 12.40.

Dark clouds built as we journeyed back to Lago di Braies, through Agordo and Arabba, Corvara and Brunico, until 3.10 pm. Tea, then it was an hour's drive back to Haus Valentin in Pedraces, which we had passed earlier, and a rendezvous with numerous folk who will feature in the next phase of this Summer Holiday.

NB Delay due to my attempting to post as Nallo Lady, as today's entry is largely copied from Sue's diary.

Here's a slideshow for the day (38 images)
Next Day
Back to Index
Posted by Phreerunner at 15:57