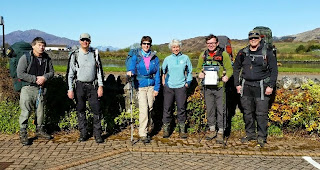 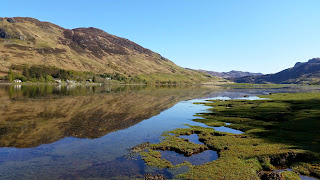 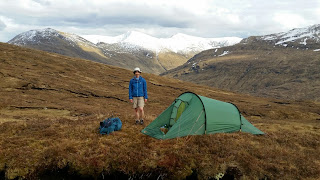 Route: as planned to beyond Iron Lodge, then directly up Carn na Breabaig before dropping to the col to camp at NH 072 308

Click on the link below (Day 1) for details of our planned route:

A perfect start (apart from the fact that I drafted a long entry that then disappeared overnight, so this is a second attempt, written at the end of Day 2).

The seven of us who stayed at Dornie Hotel enjoyed breakfast together before lining up for a series of photos. Mine shows Colin, Robin, Sue, Emma, Jeremy and Greg (top image).

Colin disappeared but the rest of us walked together for a while, admiring superb views over Loch Long. My best effort of describing the view is by way of the middle image. Others will have done better.

We soon aborted the narrow strip of tarmac in favour of the good path beside the River Glennan. A lovely route during which our group of six gradually dissipated leaving Sue and me to enjoy the views from the watershed on our own. The vistas towards the Cuillin Hills on Skye were magnificent.

Our first brew stop was enjoyed above Camas-luinie. We were joined by Robin and Emma, and by John and Norma, who had also started from Dornie. Jeremy and Greg stormed past and then entertained us with their cack-handed approach to getting through a deer fence.

Greg should be excused, as he had just flown in from Massachusetts with nine days' food. Incredibly, his rucksack is hardly any heavier than mine!

Beyond Camas-luinie a good track leads all the way to Iron Lodge. Sue and I stopped for lunch at the turn off to the Falls of Glomach, as we knew most of the 'Dornies' were heading up there. Nobody appeared - they were in no hurry.

A further stroll past numerous cuckoos along the lane lined with gorse and primroses interspersed with lesser celandine, wood anemone and dog violets, took us to the bothy at Iron Lodge. Chaffinches hopped hopefully ahead of us for some of the way. Craig and Vicky, two more Americans, were installed in the lodge. Uncertain about the efficacy of the carpet, they had set up camp in the living room. Craig came out to admire his new home whilst munching through a giant packet of crisps, whilst Vicky had donned her pyjamas and was washing their smalls.

The haul to the summit of Carn na Breabaig was up a steep grassy slope. Great views from the summit were enjoyed before we ambled down to the col and pitched camp in a fine spot (shown above).

My chef performed miracles with a few packets of dried stuff and some tuna twists.

(So that's a version of what I wrote whilst Sue was busy cooking. I'll take precautions against losing it this time, precautions that have been needed! as the signal that brought in 32 emails earlier has done a bunk.)

There's a short slideshow for the day (35 images) - here. Click on the first image, then click 'slideshow'.

What a great start. Nice images.

Thanks Alan, you wouldn't believe how much effort went into that posting!