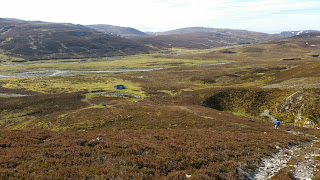 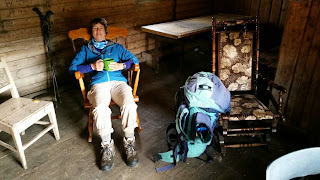 Route: as planned, including the last 3 km of yesterday's planned route

Weather: starting sunny and calm, gradually clouding over with increasing cold SE/SW wind, with a light shower as we reached Aviemore around 2 pm

Click on the link below (Day 8) for details of our planned route:

It was one of those rare nights like our first night above Iron Lodge. Perfectly calm with just the distant gurgle of a spring and the occasional 'grousing' of grouse - no doubt squabbling over their domestic duties.

The sun was on the tent very early, so getting up at 7 seemed like a long lie in. Blue skies greeted us, and it felt warm in the calm conditions despite being only 7C - we were after all up at nearly 700 metres.

It took us just 45 minutes of yomping over grikes full of hiding hares to reach the bothy by the River Dulnain - a good spot, but with no record of any other Challengers having passed by this year. Sue is pictured on the approach to this bothy.

On the way down to the Dulnain valley we saw a pair of large birds of prey. They had fringed white diamond shaped tails and white on the tops of their wings. But for the white on the wings and our distance from the west coast we'd have guessed that they were sea eagles (white tailed eagles). After a few minor acrobatics they soared off to the south west. Wonderful!

From the bothy an easy walk along the left bank of the river took us to a track for the last few hundred metres to the Red Bothy, another splendid spot. We paused here for a brew and concluded that we must be very lazy Challengers as many had already passed through - some of them three days ago. Sue is pictured again here - being very lazy.

Visitors had included Rob Slade, who we remember meeting at the start of his first Challenge in 2008 (he's now addicted), Steve Chesterton, Peter Stickler, our old friend Mick Blackburn, Andy Gerrard, Emma who set out with us from Dornie, and Nicole who liked Alex and Janet's cereal.

An uneventful stroll up the well maintained Burma Road track was brightened by the mountain scenery and by some text messages. Alan R, who passed this way on last year's Challenge, thanked us for our card. "But we thought you were getting married next week" we replied. "Yes, but Sheila wanted to open the cards!" And why not? We hope all goes well on the big day, Alan, and Sheila.

We also heard from Markus Petter, who armed with a fresh flysheet is heading along the coast north of Torridon past Craig, where there's a youth hostel that we used to enjoy visiting. I understand it's now a bothy. Shame on SYHA.

Approaching the col at the top of the Burma road, we nearly encountered a couple of mountain bikers who were heading towards Red Bothy. We'd turned off to dump our bags and ascend the last kilometre to Geal-charn Mòr without any encumbrance. A lady who was descending chatted with us for a while - the first person we'd spoken to since yesterday morning's gamekeeper. Good views of the Cairngorms from the summit were diminishing by the minute as grey clouds swirled in.

It's an easy walk down the Burma road past a dead slow worm (it was too slow) to Aviemore. We paused en route for lunch in a sheltered place by a burn, surrounded by mink traps. (Yesterday we saw a carrion crow in a cage trap, waiting nervously to be dispatched.)

Café life in Aviemore was thriving. Everywhere was full until we reached The Coffee Pot. We did get served, but everyone working there was intent on leaving at 3pm.

As this is our eighth day since starting from Dornie a launderette beckoned and later we enjoyed a very hearty meal in the Cairngorm Hotel. TGO Control seemed a bit concerned about our revised plan for tomorrow - we hoped to camp at the Wells of Dee (1200 metres) but gale force winds are forecast and there might be  an ice sheet at that height, so we are simply heading through the Lairig Ghru. I'm more concerned about the bridges, or lack of them, in the Derry Lodge area. So far as I'm aware the main problem has been temporarily remedied, so I'm sure we'll get through.

Based on your large bird description I would say Sea Eagle, which has a white-tipped tail (we watched a couple on the Baltic Sea coast earlier this week). While, according to my book, a young Golden Eagle has white bars under its black-tipped tail and under the wings. Hopefully an expert can back me up here.

Safe travels in the Lairig Ghru.

Scotland is shining through.

I've seen a picture of the temporary bridge recently installed at Derry Lodge. The river was easily waded at Easter and there is also a convenient fallen tree 200m upstream over the Derry Burn. You won't have any problems!

Thanks Andy, we are reassured, and still in the Rothiemurchus Forest, in surprisingly sunny, calm conditions! (Noon - 16 May)

I hope its not as windy as forecast although it is pretty windy here at only 200 m.
Derry will be fine.