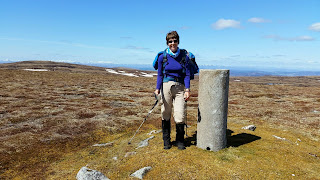 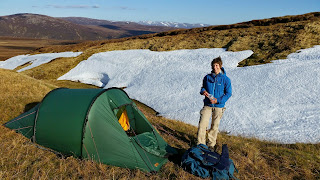 Route: as planned apart from 1) an unexpected ascent of Beinn Bhreac Mhòr  (807 metres), and 2) we stopped 2km short of our planned camping spot because we were tired and found a good pitch

Click on the link below (Day 7) for details of our planned route:

It was so comfy in the tent that we were reluctant to get up, despite encouragement from the local bird life, who turn out to be ring ouzel as well as stonechats. So we made a later than planned start (8.10) although we knew it would be a tough day.

Almost immediately we were delayed for 20 minutes with what turned out to be our only human encounter of the day. A Dunmaglass gamekeeper stopped for a chat. The lad had some fantastic binoculars that told you how far away you were looking, and an impressive piece of artillery on his passenger seat, no doubt awaiting the attention of an unwary fox. "Drop in at the house when you next come past" he offered. When the chips are down I hope I'm on this chap's side!

The stalkers' lunch hut where I first encountered Humphrey in 2007 had no other visitors today, but the sun shone in as we enjoyed a brew. We didn't enjoy all the factory machinery that was busy mutilating the landscape outside.

There followed about 9 km of good old peat grough yomping. First, up to the summit of Carn Odhar. Here Sue reccied the route ahead whilst I attended to more urgent matters. So we headed off inadvertently to Beinn Bhreac Mhòr rather than the less conspicuous but more intended Beinn Bhreac Bheag. Never mind, we accidentally visited an impressive summit that appeared to be the highest in the neighbourhood. It had a large concrete pillar (pictured with Sue) and magnificent panoramic views almost as good as those from Carn Odhar. The Monadhliath seems like a high plateau ringed by distant snow-capped mountains.


Lunch was enjoyed on a grassy slope next to the happy gurgle of spring water, shortly before the yomping ended and a good track took us down to the River Findhorn. We then enjoyed a lengthy stroll along a long and dusty road lined with pansies, down the valley before heading over the tops towards the River Dulnain.

The Findhorn valley is a beautiful place. Red deer wander undisturbed, oyster catchers fuss in flocks, and today a lone lapwing fluttered its presence. It was the first one I'd noticed on recent days, though there are lots of other types of plover on the heathery slopes mixed in with red and black grouse.

It's a lot less green here than in lower climes, with the trees only showing the vaguest sheen of green.

It was hard work. First an encounter with some piebald goats, then a couple of tricky river crossings, then an unexpected dip in height beyond a bird scattering machine, and a difficult yomp over ever bigger haggs (we were tired) to the sound of big booms from the bird scattering machine, the purpose of which remains a mystery to us. (Alright - the purpose was to scatter birds. But why?)

We were determined to reach the watershed, but given the extra distance and ascent we'd already done compared with today's plan, we were happy to descend to the first suitable place to camp. So that's where we are, as shown, near some hefty snow banks and with great views of the Cairngorm summits that loom ever closer.

It's great to get comments and text messages from other Challengers, especially as those people we are in touch with all seem to be having a good time. Comments from others like Alan, Gibson and Conrad are also appreciated of course.

We've also been 'chatting' to Markus, the Austrian Challenger, who this year is doing a west coast walk rather than the Challenge. Today he was in Inverness getting a new flysheet for his new tent, luckily being posted to him by the manufacturer. But why did the new tent fail to withstand a breezy night? That might worry me.

Lookin' good so far with some lovely camps. The weather appears to be turning decidedly wintry in the coming days with high winds and snow above 900m. Hope it doesn't force a FWA . Avalanche near Hell's Lum yesterday. As always, take care.

Thanks Gibson. Tomorrow looks a bit horrid so we've abandoned our (optimistic) plan to camp at the Wells of Dee, instead of which we'll go over the Lairig Ghru and head for a sheltered spot in the vicinity of Luibeg Bridge. Not an FWA, just a more judicious plan, despite TGO Control's reservations about its safety. Hoping to go high on Monday and Tuesday if the weather obliges.

Lovely on the Monadliath and its glens. Such a shame its being industrialised. Glad I saw it before much destruction had taken place.

So Martin, what were the urgent matters then? Or is that rude to ask?! Glad all is going well and you are enjoying yourselves. Tell Sue I tried hot yoga at the Om Yoga Show today.

Urgent matters involved major excavations Jenny. I should have asked the factory workers if I could use their facilities I suppose. After all, I was using the services provided by their phone mast in an area where logically there should be no reception.