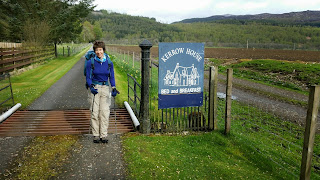 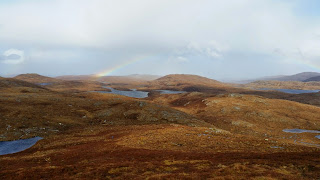 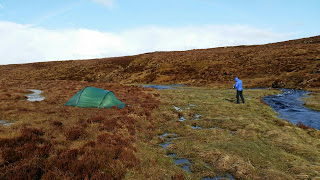 Route: as planned, plus a faux pas in Tomich, where we set off from the hotel in the wrong direction, and an extension to point 7 on tomorrow's itinerary - NH 390 245 at 530 metres

Click on the link below (Day 4) for details of our planned route:

Apologies for the possible puerile nature of some of this text, composed during a self imposed fourteen hour exile in a Rab 400 cocoon. Then lost and recompiled.

Knickers. Jeremy's choice of underwear (ladies cotton) and his river crossing technique have been observed and commented upon. Having met Jeremy only briefly and for the first time on this trip, I can only pass on the observations of others, with one exception. He was talking through his *** when it came to concerns about the condition of the north Mullardoch ridge, which contrary to his opinion was in excellent condition for walking. Perhaps he should reconsider his choice of knickers!

Anyway, it seems that whilst folk like John and Norma cross streams by boulder hopping fully clothed but with the risk of total immersion, Jeremy prefers to strip to his knickers and wade. Discussion earlier today with Alan and Phil brought the revelation from Alan that he was "with Jeremy on that".... Does that mean that Alan also wears ladies underwear? Phil remained discreetly silent.

I'm writing this from the comfort of our little Nallo tent in a howling gale next to a stream that we need to cross but aren't inclined to due to the volume of water in it. So we camped next to it. My chef is having a few problems - that is unless she is trying to warm up my wet boots for tomorrow by pouring tonight's dinner into them. They were stolen by a dog in the Slaters Arms last night so they'll be at even greater risk of dog theft tomorrow. Our supply of loo roll is rapidly diminishing as Sue is multi-tasking, all of which tasks require either loo roll or baby wipes. And we have no babies with us!

It's serious fun in here! I've just been attacked by a wet sock on our dancing in house washing line. It's windy.

We started from Kerrow House B&B after a fine breakfast in freshly dried kit. Liz had somehow managed to dry both our boots and our (washed) waterproof socks as well as a load of other stuff. Wonderful.

Sue is pictured on the sunny driveway moments before the rain started.

We soon met Alan and Phil, walking along the road from Tomich. In a conversation that ranged from missing tent poles to ladies knickers it became apparent that they had been unable to camp at Cannich last night as Alan had left his tent poles in Tomich. Phil had then found accommodation for them in Drumnadrochit and a taxi. The taxi driver had a few problems understanding their itinerary.... "so you want me to take you to Drum then in the morning I'm taking you back to Tomich, with all your gear, so that you can walk back to the same B&B in Drum. Duh!"

Yes, most folk would conclude that they are a little crazy.

We saw one other person all day, once we'd said goodbye to a distressed Scotsman who likened Ms Sturgeon to Hitler (a bit harsh?) and the young lady from Georgia who served us elevenses in the Tomich Hotel. Amanda hadn't take the 'lift to Cannich to get gas' bait, so we decided to restrict brew stops and manage with what we'd got. The weather didn't look suitable for brewing anyway. And it wasn't.

That one person was a cyclist on the track near Loch ma Stac, approaching a boggy section crossed by several streams in spate and negotiable by the acquired art of 'tussock jumping'. We have that art (our wet feet are due simply to several hours of squelching through bog) but we wouldn't want to do it with a bicycle. Moreover this cyclist was frantically pushing his bike down a track that was good for cycling. He was in a hurry, with no time to chat to us.

Before that we had lunched in a rainy larch forest, exiting to discover that the sun was shining. Then we passed five massive wind turbines before reverting from their ghastly access road to a narrow track with bogs.

We passed our planned camping spot at about 2.30, and rather than spend the afternoon being buffeted in our tent we decided to be buffeted in our waterproofs, which were worn all day, albeit they dried out between showers.

So we passed the strange three storey building on Loch ma Stac and headed up to the trig pointed 679 metre summit of Meall a'Chrathaigh. Then on to two more lesser summits before descending and making our way to this rather exposed camping spot that I'd noted from a previous visit in calm sunny weather when the rivers weren't in spate. If we can't cross tomorrow we'll have to retrace our steps until we can. We can afford to do that as it's not far to Drumnadrochit from here.

Today's pictures show Sue in the sun, a rainbow from Meall nan Oighreagan (after the best of it had faded - the slideshow will have a much better version), and our sunny but rather exposed campsite.

The Balmacaan Forest is a lovely spot of wilderness, even in iffy weather -  highly commended. Must go - dinner is served, surprisingly not out of my boots!

The fact that you actually traversed the north Mullardoch ridge should put paid to any further discussion on whether or not it was in condition I think. As for our Nicola, the less said the better - though she's not Hitler!

Hope your river crossing proves easier than anticipated. Weather looks quite good for next few days, if still on the cold side.

What a day. A meander as well eh! Well done on posting so much text.

Thanks Gibson, and Alan

The river crossing actually proved to be fun, once Sue had practiced her long jumping technique!

There may be a lot of text Alan, but quantity doesn't translate to quality. I'll try to be briefer in future. Without so much meandering...