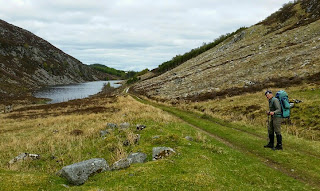 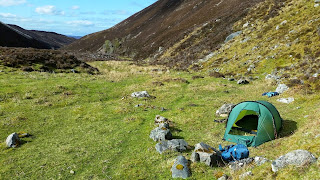 Click on the link below (Day 6) for details of our planned route:

Thanks everyone for your comments. We really did enjoy the Balmacaan Forest. It's a great shame if the area is to be trashed by wind farms. The perpetrators should be locked up. Just like those who are trashing the Monadhliath where we are now. Albeit we have an idyllic position out of sight of the extensive factory sites.

Up at 6, we had the use of the kitchen at the B&B, but we're never really hungry at that time of day, so yogurt and toast was about all we could manage.

Away at 7, we got to what we thought was Temple Pier in plenty of time for Gordon Menzies' 8 o'clock sailing. Ted and Jenny Spiller joined us. We chatted. 8 o'clock came and went. Eventually Gordon tracked us down. We were at the wrong pier. Oh dear! Our apologies go to all concerned, especially Gordon - chocolate caramel shortbread was handed out by Sue by way of recompense for the valuable time lost. Sorry Gordon. The others on the boat for the thirty minute trip across Loch Ness to Inverfarigaig were Alan and David Hardy, Steve O'Hara, Michael and Juergen from Stuttgart, and Peter and JP from Shropshire. Gordon was in jovial form, possibly because, at £10 a head, it's a nice little earner. Not that any of us would argue that it's not good value for the essential service.

Sue and I set off with Steve towards Ault-na-goire. I thought Alan and David were going there, but they turned right along the lochside, and who would call back a vetter?

At Ault-na-goire we found the Rev David and Nicole, who was raving about something as unlikely as what she thought was Janet's home made Tropical Fruits muesli. It turned out to be from Aldi and had received accolades from others. They had spent the night in Alex and Janet Sutherland's garden, together with three pink footed geese who had just flown in. Sue, Steve and I then experienced the legendary hospitality that Alex and Janet offer to Challengers. Thanks so much you two for the coffee and toast and an hour of your excellent company. During that time, Alan and David wandered in. Alan said he'd taken a wrong turn, distracted by thoughts of a couple they had encountered the other day engaged in a random act of exposure in the middle of a path. Alan had wanted to walk past this couple, remarking "nice day for it", but David had restrained him and they held back. Eventually they were spotted by the copulating couple, who dashed off to a nearby car. Alan assured us that there were no ladies' knickers whatsoever involved in this incident.

Alex and Janet rent out a nearby property under the 'Loch Ness Hideaways' banner. They have weeks free this year so anyone fancying a holiday in this lovely part of the world should contact them, eg via Facebook.

We also learnt of another devastating earthquake in Nepal.

We walked a little further with Steve, past the phone box in Errogie that also serves as a library. We made appropriate entries in the visitors' book. Steve's good at spotting birds and noted a sparrowhawk and a greater spotted woodpecker. It didn't require any birding skills to notice the cuckoos.

It was a great day for walking - calm and clear, if a tad cool. But that coolness didn't matter to Sue and me as we headed up a good track past the coconut aroma of blossoming gorse, that led almost to the summit of Creag a'Chliabhain (aka 'The Hill of Cold Feet). There we no chilblains for us today - just good clear views to the mountain panorama and to the sea beyond Inverness, which seemed to be in receipt of a host of EasyJet flights.

Down in Conagleann, lunch was enjoyed in warmish sunshine before we headed up the glen past a flightless partridge towards a mansion that looks a bit like the top deck of a cruise liner - Dunmaglass Lodge. I'm pictured on the Conagleann path. Beyond that was a scene of industrial landscape where wild land had stood until recently. Lorries and other vehicles trundled up and down a wide new road and there was lots of industrious activity taking place on the Monadhliath horizon.

We skipped the road and headed directly up another little hill, Beinn Mheadhoin (aka Hare Hill  - there were masses of them). It was a thrutch made possible only by our ability to haul ourselves up by grabbing tufts of the deep heather. A dead deer, one of many seen as we have been crossing the Highlands, bore evidence of a harsh winter. It sported a fine set of antlers that Alan might like to collect sometime. Summit views were blighted by the distressing sight of a beautiful landscape trashed by wind farm construction work.  On the narrower track that we will follow tomorrow we could see Alan and David marching along like two little matchstick men.

An easy descent took us to our planned camping spot out of sight of the ugly industrial scene.

Just one obstacle remained - a river crossing to reach the shangri-la that beckoned us. I boulder hopped. John and Norma would have been proud of me. But total immersion was only narrowly avoided by a giant leap that surpassed even Sue's long jumping skills. So she stripped to her Rohans for a cool, wet, safe crossing.

Camp is pictured - in a sheltered spot on soft flat grass near (but not too near) the rushing torrent. We were there by 4.30 and have enjoyed a relaxing evening in camp. I hope our resident stonechat stops chatting at some point. It's very vocal...

I gave passing thought to popping up Beinn Mheadhoin on Tuesday, but in view of the weather opted to sit on the road below and drink tea/eat cake with passing Challengers. An