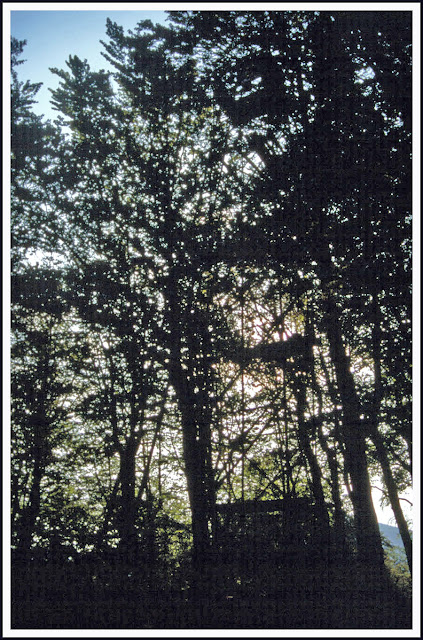 
Sitting in the tent after a storm listening to cowbells.  Today has been hot again and we’ve climbed further.  The route included some of the Santiago di Compostella pilgrimage route, so we saw loads of people.  It’s interesting finding water sources, and with one dry today we had to raise a manhole cover to obtain water!

Diary Entry (by Martin)
Up at dawn on another hot day. To be our longest yet. Started at 7.45 after rising as usual at 7. High mountain in the east not visible. Followed Véron's route, more or less, all day.


Last night was another sheet sleeping bag only night for most of the night. Very hot despite being on top of a ridge in a strong breeze. Lots of horse bells all night. Ascended Errola, 907 metres, 8 o'clock, 25°C - breezy.


By 8.15 we were at Col de Méharroztegui. Annoying horse flies here and for a lot of today. Quite a few bites. Our four litre supply of water from les Aldudes was finally finished beyond deTeilary, but on reaching d'Hauzay soon afterwards we found a magnificent "fountain" to wash hands and faces and replenish supplies.


A Frenchman helpfully tried to point out the interesting bits of our route ahead. 26°C. Lots of grasshoppers around today, and hunting platforms - huge ladders up to 'tree houses' in the tree tops. Used presumably for shifting game birds towards the gunners in the shooting butts lining the hillsides next to the woods.

We have seen some alpine plants, eg spring (like) gentians, from the start, but today some familiar saxifrages and thistles and other alpine plants became more evident. We reached the hill fort summit of Lindux, on the border - 1220 metres - highest summit yet at 11 am. A very windy 29°C here. Strong southerly wind. Horses on the summit. They seem to choose high points to look miserable at during the day, then descend to feeding areas lower down at night.

From here there were extensive views of our route back as far as La Rhune. On a good day the should be visible from here. So we travailed pleasant beech woods to get to d'Ibaneta where there is a memorial to somebody called Roland, and a chapel.
This is apparently a very historic site, but we don't know why. The next 4 km was up a metalled road to Col Lepoeder. We met huge numbers of people here. Just as well I had accomplished my first alfresco ablution earlier.
﻿

We are on GR65 and GR11, the former being a pilgrim route to Santiago de Compostella, and lots of people are doing it. Later we meet a French couple doing GR11, a Dutch couple doing nothing in particular, and a lone Englishman lost on GR11. Laurie-like, he had a rucksack and an old bag to supplement it. (Laurie - RIP - was a friend of ours who completed a section of the HRP wearing two rucksacks. On one day when Dave and I had arrived in , set up camp, showered, and gone to a restaurant, Laurie stumbled into the restaurant  with all his baggage. "Ah" exclaimed the French "your porter has arrived!")
We met many people on the descent to a 1380 metre col. Before this we had lunched in a shady glade on the way up to Lepoeder, on the road from which there were good views of and its huge looking monastery.
There were many cyclists on the route. We continued to another coal for widely publicized water at Fontaine du Roland. It was dry. The Dutch people and a cyclist were collecting drips. So we went on and found the spring next to border stone 201. Two French people kindly pointed to the manhole cover under which there was some cool spring water. We drank as much as we could before filling up our four litres and proceeding, briefly in unison with the French couple doing the GR11, to our hidden campsite about 1km before Col d'Orgambidé, at 1035 metres according to my altimeter. 5.30 pm - a nine and three-quarter hour day. Tiring and hot. Put tent up then watched storm from within before cooking tea - soup - too much rice, drinks.
Not so hot today, only in the low 30s. And down to 21°C after the storm. 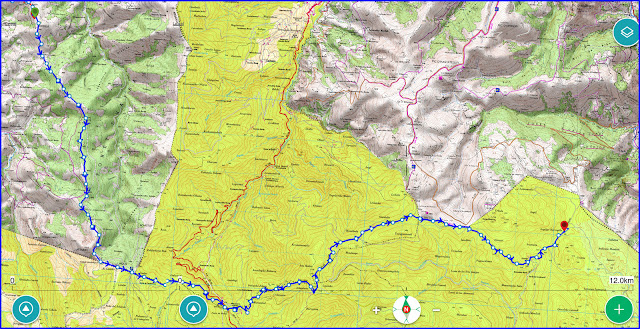 I presume that is Sue in the odd posture in the last photo - what was going on there?

Yoga. That would, naturally, be after a gentle run to warm down?